Moore and Yang defined an integral notion, based on an extension of Riemann sums, for inclusion monotonic continuous interval functions, where the integrations limits are real numbers. This integral notion extend the usual integration of real functions based on Riemann sums. In this paper, we extend this approach by considering intervals as integration limits instead of real numbers and we abolish the inclusion monotonicity restriction of the interval functions and this notion is used to determine interval probability density functions. 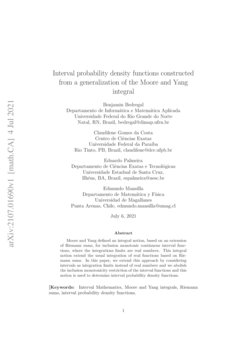 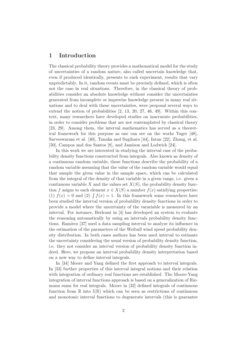 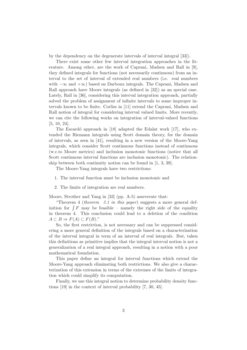 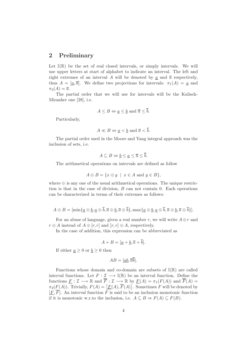 A Coq Formalization of the Bochner integral

The Bochner integral is a generalization of the Lebesgue integral, for f...
Sylvie Boldo, et al. ∙

We propose a spectral collocation method, based on the generalized Jacob...
Somayeh Nemati, et al. ∙

A Coq Formalization of Lebesgue Integration of Nonnegative Functions

Integration, just as much as differentiation, is a fundamental calculus ...
Sylvie Boldo, et al. ∙

We extend the framework for complexity of operators in analysis devised ...
Eike Neumann, et al. ∙

The classical probability theory provides a mathematical model for the study of uncertainties of a random nature, also called uncertain knowledge that, even if produced identically, presents to each experiment, results that vary unpredictably. In it, random events must be precisely defined, which is often not the case in real situations. Therefore, in the classical theory of probabilities consider an absolute knowledge without consider the uncertainties generated from incomplete or imprecise knowledge present in many real situations and to deal with these uncertainties, were proposal several ways to extend the notion of probabilities

There exist some other few interval integration approaches in the literature. Among other, are the work of Caprani, Madsen and Rall in [9], they defined integrals for functions (not necessarily continuous) from an interval to the set of interval of extended real numbers (i.e. real numbers with −∞ and +∞) based on Darboux integrals. The Caprani, Madsen and Rall approach have Moore integrals (as defined in [32]) as an special case. Lately, Rall in [36], considering this interval integration approach, partially solved the problem of assignment of infinite intervals to some improper intervals known to be finite. Corliss in [11] extend the Caprani, Madsen and Rall notion of integral for considering interval valued limits. More recently, we can cite the following works on integration of interval-valued functions [5, 10, 24].

The Escardó approach in [18] adapted the Edalat work [17], who extended the Riemann integrals using Scott domain theory, for the domain of intervals, as seen in [41], resulting in a new version of the Moore-Yang integrals, which consider Scott continuous functions instead of continuous (w.r.to Moore metrics) and inclusion monotonic functions (notice that all Scott continuous interval functions are inclusion monotonic). The relationship between both continuity notion can be found in [1, 3, 39].

The Moore-Yang integrals have two restrictions:

“Theorem 4 (theorem  3.1 in this paper) suggests a more general definition for ∫F may be feasible – namely the right side of the equality in theorem 4. This conclusion could lead to a deletion of the condition A⊂B⇒F(A)⊂F(B).”

This paper define an integral for interval functions which extend the Moore-Yang approach eliminating both restrictions. We also give a characterization of this extension in terms of the extremes of the limits of integration which could simplify its computation.

Finally, we use this integral notion to determine probability density functions [19] in the context of interval probability [7, 30, 45].

Let I(R) be the set of real closed intervals, or simply intervals. We will use upper letters at start of alphabet to indicate an interval. The left and right extremes of an interval A will be denoted by a–– and ¯¯¯a respectively, thus A=[a––,¯¯¯a]. We define two projections for intervals: π1(A)=a–– and π2(A)=¯¯¯a.

The partial order that we will use for intervals will be the Kulisch-Miranker one [28], i.e.

The partial order used in the Moore and Yang integral approach was the inclusion of sets, i.e.

The arithmetical operations on intervals are defined as follow

where ⊕ is any one of the usual arithmetical operations. The unique restriction is that in the case of division, B can not contain 0. Each operations can be characterized in terms of their extremes as follows:

For an abuse of language, given a real number r, we will write A⊕r and r⊕A instead of A⊕[r,r] and [r,r]⊕A, respectively.

In the case of addition, this expression can be abbreviated as

A distance between two intervals is defined by:

In [31] was proved that dM is a metric. So, an interval function F is continuous, if it is continuous w.r.to the metric dM.

In this section we will overview the main definitions of the Moore and Yang interval integral approach.

Let A be a real interval. A partition T1 of A is finer than the partition T2 of A, denoted by T1⪯T2, if T2⊆T1.

Clearly, ⪯ is a partial order on T(A).

Let A be a real interval. ⟨T(A),⪯⟩ is a lattice with greatest element.

Let A be an interval and F be an inclusion monotonic continuous interval function. The Riemann sum of F w.r.to a partition T of A is defined by:

where d is the usual metric on the real numbers, i.e. d(x,y)=∣x−y∣.

(Characterization theorem) Let A be an interval and F be an inclusion monotonic continuous interval function. Then

Let A and B be two real intervals such that A≪B. Define,

Given a metric space (X,d) and a subset A of X we define the diameter of A, denoted by diam(A), by

A subset A of a metric space (X,d) is bounded if diam(A) is finite

A function of a non-empty set into a metric space is called a bounded function if its image is a bounded set.

Let ϕ:I(R)⟶R2 be the function defined by, ϕ([a,b])=(a,b). Clearly the function ϕ is continuous and injective. Thus, we can identify I(R) with a subspace of R2, where R2 is considered here with the metric,

This is not restrictive since usual metrics in Rn are equivalents, from the topological point-of-view.

Proof: Since F is a bounded interval function we have that F(I)⊆I[A,B] for some A,B∈I(R). The statements follows from the Completeness lemma, by taking X=F(I). ■

Let I and J be bounded subsets of I(R). Let

Proof: The result follows by the proof of Lemma 4.1, by the characterization of the interval addition and by general properties of supremum and infimum. ■

Let F:I[A,B]⟶I(R) be a bounded interval function. Given a partition P of I[A,B], we define the following Riemann sums of F w.r.to P namely:

Let F:I[A,B]⟶I(R) be a bounded function and let P be a partition of I[A,B]. Then

On the other hand, we have that

Therefore, we have that

The second inequality was proved in Lemma  4.4 and the third inequality follows by the same token of the first. ■

Proof: Since the partition P∪Q refines P and Q we have that

The inequality ∫BA––––F(X)dX≤¯¯¯¯¯¯¯¯¯∫BAF(X)dX follows by Corollary  4.2. The remaining inequalities follows by definition of the lower and upper integrals. ■

Let P′ and P′′ be subset of P[A,B] satisfying the following properties:

Proof: This follows by general properties of supremum and infimum. ■

A bounded function F:I[A,B]⟶I(R) is said to be an integrable function if

This common value is called the interval integral of F w.r.to A and B and it is denoted by ∫BAF(X)dX.

Let F:I[A,B]⟶I(R) be a bounded function. Define the left and right spectrum of F, denoted by Fl and Fr respectively, by

Let F:I[A,B]⟶I(R) be a continuous function. Then,

Proof: We will only prove the first equality since the second one follows analogously.

On the other side, we have that

Analogously we have that

Therefore, it is enough to prove that

By similarity, we will only prove the former.

Clearly we have that

Since F–– is a continuous function and I[A,B] is compact we have that F–– is uniformly continuous.

[characterization theorem] If F:I[A,B]⟶I(R) is a continuous interval function then, F is an integrable function and