We consider the extremal problem of interpolation of scattered data in R^3 by smooth curve networks with minimal L_p-norm of the second derivative for 1<p<∞. The problem for p=2 was set and solved by Nielson (1983). Andersson et al. (1995) gave a new proof of Nielson's result by using a different approach. Partial results for the problem for 1<p<∞ were announced without proof in (Vlachkova (1992)). Here we present a complete characterization of the solution for 1<p<∞. Numerical experiments are visualized and presented to illustrate and support our results. 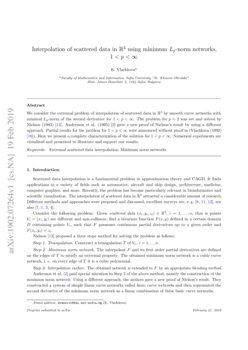 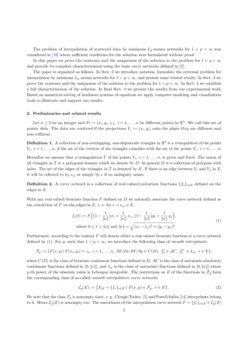 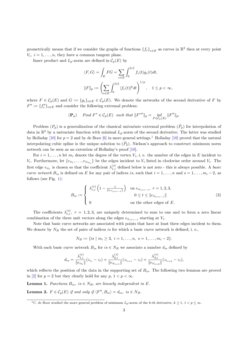 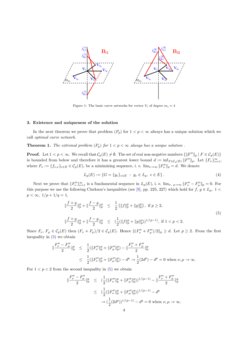 In this note we study automata recognizing birecurrent sets. A set of wo...
Andrew Ryzhikov, et al. ∙

The classes PPA-p have attracted attention lately, because they are the ...
Aris Filos-Ratsikas, et al. ∙

Let f be an unknown function in ℝ^2, and f_ϵ be its reconstruction from ...
Alexander Katsevich, et al. ∙

In this study the Voronoi interpolation is used to interpolate a set of ...
Luciano Melodia, et al. ∙

Scattered data interpolation is a fundamental problem in approximation theory and CAGD. It finds applications in a variety of fields such as automotive, aircraft and ship design, architecture, medicine, computer graphics, and more. Recently, the problem has become particularly relevant in bioinformatics and scientific visualization. The interpolation of scattered data in R3 attracted a considerable amount of research. Different methods and approaches were proposed and discussed, excellent surveys are, e. g. (Franke and Nielson, 1991; Lodha and Franke, 1997; Mann et al., 1992), see also (Dey, 2006; Amidror, 2002; Anjyo et al., 2014; Cazals and Giesen, 2006).

Consider the following problem: Given scattered data (xi,yi,zi) ∈R3, i=1,…,n, that is points Vi=(xi,yi) are different and non-collinear, find a bivariate function F(x,y) defined in a certain domain D containing points Vi, such that F possesses continuous partial derivatives up to a given order and F(xi,yi)=zi.

Nielson (1983) proposed a three steps method for solving the problem as follows:

Step 3. Interpolation surface. The obtained network is extended to F by an appropriate blending method.

The problem of interpolation of scattered data by minimum Lp-norms networks for 1<p<∞ was considered in (Vlachkova, 1992) where sufficient conditions for the solution were formulated without proof.

In this paper we prove the existence and the uniqueness of the solution to the problem for 1<p<∞ and provide its complete characterization using the basic curve networks defined in (Andersson et al., 1995).

The paper is organized as follows. In Sect. 2 we introduce notation, formulate the extremal problem for interpolation by minimum Lp-norms networks for 1<p<∞, and present some related results. In Sect. 3 we prove the existence and the uniqueness of the solution to the problem for 1<p<∞. In Sect. 4 we establish a full characterization of the solution. In final Sect. 4 we present the results from our experimental work. Based on numerical solving of nonlinear systems of equations we apply computer modeling and visualization tools to illustrate and support our results.

Let n≥3 be an integer and Pi:=(xi,yi,zi), i=1,…,n be different points in R3. We call this set of points data. The data are scattered if the projections Vi:=(xi,yi) onto the plane Oxy are different and non-collinear. A collection of non-overlapping, non-degenerate triangles in R3 is a triangulation of the points Vi, i=1,…,n, if the set of the vertices of the triangles coincides with the set of the points Vi, i=1,…,n. Hereafter we assume that a triangulation T of the points Vi, i=1,…,n, is given and fixed. The union of all triangles in T is a polygonal domain which we denote by D. In general D is a collection of polygons with holes. The set of the edges of the triangles in T is denoted by E. If there is an edge between Vi and Vj in E, it will be referred to by eij or simply by e if no ambiguity arises.

Furthermore, according to the context F will denote either a real-valued bivariate function or a curve network defined by (1). For p, such that 1<p<∞, we introduce the following class of smooth interpolants

We note that the class Fp is nonempty since, e. g. Clough-Tocher  Clough and Tocher (1965) and Powell-Sabin Powell and Sabin (1977) interpolants belong to it. Hence Cp(E) is nonempty too. The smoothness of the interpolation curve network F={fe}e∈E∈Cp(E)geometrically means that if we consider the graphs of functions {fe}e∈E as curves in R3 then at every point Vi, i=1,…,n, they have a common tangent plane.

where F∈Cp(E) and G:={ge}e∈E∈Cp(E). We denote the networks of the second derivative of F by F′′:={f′′e}e∈E and consider the following extremal problem:

Problem (Pp) is a generalization of the classical univariate extremal problem (~Pp) for interpolation of data in R2 by a univariate function with minimal Lp-norm of the second derivative. The latter was studied by Holladay Holladay (1957) for p=2 and by de Boor de Boor (1976) in more general settings.111C. de Boor studied the more general problem of minimum Lp-norm of the k-th derivative, k≥1, 1<p≤∞. Holladay Holladay (1957) proved that the natural interpolating cubic spline is the unique solution to (~P2). Nielson’s approach to construct minimum norm network can be seen as an extention of Holladay’s proof (Holladay, 1957).

For i=1,…,n let mi denote the degree of the vertex Vi, i. e. the number of the edges in E incident to Vi. Furthermore, let {eii1,…,eiimi} be the edges incident to Vi listed in clockwise order around Vi. The first edge eii1 is chosen so that the coefficient λ(s)1,i defined below is not zero - this is always possible. A basic curve network Bis is defined on E for any pair of indices is, such that i=1,…,n and s=1,…,mi−2, as follows (see Fig. 1):

, are uniquely determined to sum to one and to form a zero linear combination of the three unit vectors along the edges

which reflects the position of the data in the supporting set of Bis. The following two lemmas are proved in (Andersson et al., 1995) for p=2 but they clearly hold for any p, 1<p<∞.

3 Existence and uniqueness of the solution

In the next theorem we prove that problem (Pp) for 1<p<∞ always has a unique solution which we call optimal curve network.

The extremal problem (Pp) for 1<p<∞ always has a unique solution .

Let F={fe}e∈E be the unique curve network that satisfies the interpolation conditions F(Vi)=zi, i=1,…,n and its second derivative F′′ coincides a.e. with G. To prove the existence of the solution to the problem, next we show that F={fe}e∈E belongs to Cp(E). We have to show that for every vertex Vi there exists a tangent plane to the curve network F. First, we prove that

From (8) after integration we obtain

hence from the interpolation conditions we have

Further on, if a,b,c are vectors in R3, we denote by (a,b,c) their scalar triple product.

Functions fe, e∈E, defined by (1) are parametric curves in R3 represented by (x=xe(t), y=ye(t), z=ze(t)). Then vector te∈R3 defined by te:=(xj−xi∥eij∥,yj−yi∥eij∥,f′ij(0)) is a tangent vector to curve fe at point Vi. Let Vi be a vertex in T of degree mi≥3 (if mi=2 then a tangent plane in Vi always exists). Let e1, e2, and e3 be three arbitrary edges incident to Vi. Since Fν∈Cp(E) then Fν has a tangent plane at Vi. A necessary and sufficient condition for the existence of such a plane is

where te1,ν, te2,ν, and te3,ν are the three tangent vectors. We take the limit in (9) for ν→∞, use (7), and obtain that the scalar triple product of the limit vectors te1,te2,te3 is zero too. The three edges e1, e2, and e3 are arbitrarily chosen, hence the curve network F has a tangent plane at point Vi, which has been arbitrarily chosen too. Therefore F={fe}e∈E belongs to Cp(E) and solves problem (Pp).

It remains to prove uniqueness of the solution. Let F0 and F1 be two solutions of (Pp). Then 12(F0+F1)∈Cp(E). From Minkowski’s inequality it follows

4 Characterization of the solution

In this section we provide a full characterization of the solution F∗ to the extremal problem (Pp) for 1<p<∞. Its existence and uniqueness have been already established in Theorem 3. Further, for simplicity we use the notation (x)r± := |x|rsign(x), r∈R,x∈R. Next we prove that (F∗′′)p−1± can be represented as a linear combination of the basis curve networks defined by (3). Finding of F∗ reduces to the unique solution of a system of equations. The following theorem holds.

Smooth interpolation curve network F∗={f∗e}e∈E∈Cp(E) is a solution to problem (Pp), 1<p<∞, if and only if

Proof.  Let us consider the set of interpolation curve networks

Thus, problem (Pp), 1<p<∞ is equivalent to the following problem

Moreover, the partial derivative w.r.t. G of the expression in the integral in (13) is zero for the extremal function ~G (it follows from the Euler equation, see (Shilov, 1965), pp. 94). Hence,

From the last inequality it follows that the solution ~G (F∗′′, respectively) has the form

As a consequence, we can formulate the following theorem.

Curve network F∈Cp(E) solves problem (Pp) for 1<p<∞ if and only if F′′=(∑is∈NBαisBis)q−1±. The coefficients αis are the unique solution to the following system of equations

Proof.  From Theorem 4 it follows that there exist real numbers αis, is∈NB such that the second derivative of the unique solution F to problem (Pp) for 1<p<∞ is F′′=(∑is∈NBαisBis)q−1±. On the other hand, according to Lemma 2, F is a smooth interpolation curve network if and only if ⟨F′′,Bkl⟩=dkl for every kl∈NB. Therefore numbers αis are a solution to system (15).

To find the minimum Lp-norm networks for 1<p<∞ we have to solve system (15) which is nonlinear except in the case where p=2 when it is linear. We have adopted a Newton’s algorithm Vlachkova (2000) to solve this type of systems. We use Mathematica package to visualize the extremal curve networks. Below we present results of our experiments where solutions of (Pp) were computed and visualized for different p on two small data sets.

In this paper we considered the extremal problem of interpolation of scattered data in R3 by smooth minimum Lp-norm networks for 1<p<∞. We proved the existence and the uniqueness of the solution for 1<p<∞ and provided its complete characterization. We presented numerical experiments and gave examples to visualize and support the obtained results.

The case p=∞ is not completely understood and needs to be studied further. First of all it is known that the solution in this case is not unique. Second, the approach based on Lagrange multipliers can not be applied directly to the case p=∞. Another interesting question that arises is whether the sequence of solutions for 1<p<∞ converges as p→∞, and if yes, what is the limit?