We introduce a novel view to understand how dropout works as an inexplicit ensemble learning method, which do not point out how many and which nodes to learn a certain feature. We propose a new training method named internal node bagging, this method explicitly force a group of nodes to learn a certain feature in training time, and combine those nodes to be one node in inference time. It means we can use much more parameters to improve model's fitting ability in training time while keeping model small in inference time. We test our method on several benchmark datasets and find it significantly more efficiency than dropout on small model. 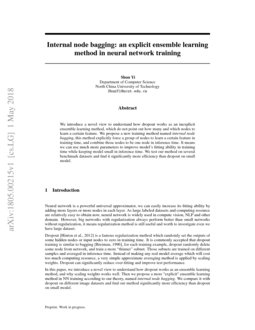 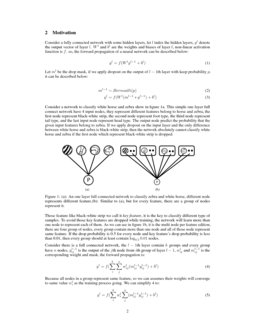 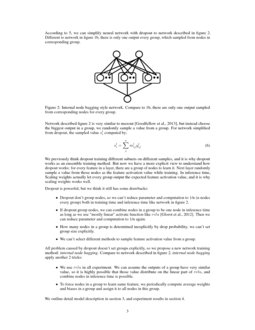 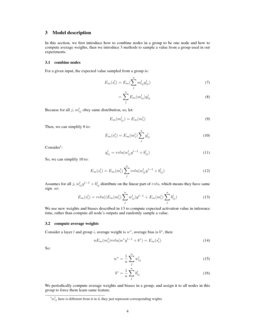 Neural network is a universal approximator, we can easily increase its fitting ability by adding more layers or more nodes each layer. As large labeled datasets are relatively easy to obtain now, neural network is widely used in computer vision, NLP and other domain. However, achieve state-of-the-art performance always need big models with regularization

[Goodfellow et al., 2016], or even ensemble of several models, which limits the use of neural network especially on mobile device. Although some lightweight models have been proposed recently, like [Howard et al., 2017, Zhang et al., 2017]

, but they rely on well-designed structures and only focus on convolutional neural network.

Dropout [Hinton et al., 2012] is a famous regularization method in neural network training which randomly set the outputs of some hidden nodes or input nodes to zero in train time. It is commonly accepted that dropout training is similar to bagging [Breiman, 1996]. For each training sample, dropout randomly deletes some nodes from network, and trains a thinner subnet, those subnets are trained on different samples and averaged in test time. Instead of making any real model average which will cost too much computing resource, a very simple approximate averaging method is applied by weight scaling. There are some empirical analyses show weight scaling works well in deep models [Srivastava et al., 2014, Wardefarley et al., 2014, Pham et al., 2014]. Dropout can indiscriminately and reliably yield a modest improvement in performance when applied to almost any type of model [Goodfellow et al., 2013], but may not very efficiency on small model[Srivastava et al., 2014].

In this paper, we introduce a novel view to understand how dropout works as a layer-wise ensemble learning method basing on several assumptions, and propose a new training method named internal node bagging according to our theory. We test our method on MINIST [Lecun et al., 1998], CIFAR-10 [Krizhevsky, 2009] and SVHN [Netzer et al., 2011], with fully connected network and convolutional network, find it can significantly improve test performance of small models.

Consider a network that classify white horse and zebra in figure

To avoid those features like black-white strip which are the key to classify different type of samples are dropped, network should learn to use more than one node to learn each of them. As we can see in figure (b)b

Although what we mentioned above is too idealized because features learned by neural network are distributed, there are still some empirical evidences support our assumption, for example, dropout training always need bigger models [Srivastava et al., 2014]

, shutting off a hidden neuron in dropout network can not simply remove features of input

[Bouthillier et al., 2015], and there is significant redundancy in the parameterization of several deep learning models [Shakibi et al., 2013].

Consider a fully connected dropout network which every feature is represented by a group of nodes like network in figure (b)b, the l−1th layer contains k groups and every group has n nodes, yl−1ij is the output of the jth node from ith group of layer l−1, wlij and bl are the corresponding weights and biases, ml−1ij is drop mask, f

yl is the output of layer l. Then the forward propagation is:

Because all nodes in a group represent same feature, so we can assume their weights will converge to similar value as the training process going. Let the value be wli, so we can simplify 1 to:

According to 2, we can simplify neural network with dropout to network described in figure 2, which is different to network in figure (b)b that every group only has one output sampled from corresponding nodes.

Network described in figure 2 is very similar to maxout [Goodfellow et al., 2013], but instead choose the biggest output in a group, it randomly samples one. Let the sampled output be sli, it computed by:

Now we have a novel view to understand how dropout works as a layer-wise ensemble training method: For every feature in a layer, there are a group of nodes to learn it, next layer randomly samples a value from those nodes as the feature activation while training. In test time, weight scaling approximately let every group output the expected feature activation.

We consider that if we know which nodes in a layer represent same feature, then we may be able to combine those nodes to be one node in test time which will reduce tons of parameters and computation. It can also be interpreted from opposite perspective: for every internal node in a small network, we use a group of nodes to estimate its parameters in train time. We name this method

There are 2 problems we should resolve, the first is how do we know which nodes represent same feature, the second is how to combine nodes to be one node. For resolving the 2 problems, we apply follow 2 tricks:

In this section, we first introduce how to combine nodes in a group to be one node and how to compute average weights, then we introduce 2 methods to sample a feature activation from a group used in our experiments.

For given input, the expected value sampled from a group is:

For all mlij in a group, they obey same distribution, so, let:

Then, we can simplify 4 to:

Consider222wlij here is different from it in 1, they just represent corresponding weights:

Assume for all ylij in a group, they distribute on the linear part of relu, so:

We combine nodes in a group to be one node in test time according to 8, which is equal to weight scaling if every group only contain one node.

Consider a layer l and group i, average weights are wavg, average biases are bavg, then:

We periodically compute average weights and biases in a group, and assign it to all nodes in this group to force them learn same feature.

We propose 2 methods to sample an activation from a group:

If there is only one node every group, method A is equal to dropout, network apply method B is equal to standard network.

We implement our models using tensorflow, all source code is available in

www.github.com/Xiong-Da/internal_node_bagging_V2. Settings shared in all experiments are listed below:

For experiments on MNIST, we use fully connected network with 2 same width hidden layers. For experiments on CIFAR-10 and SVHN, we use CNN described in table I, which is modified from the "base model C" in [Springenberg et al., 2014]

In this section, we investigate the performance of our methods on models with variety size.

Figures in 3 show the performance of method A on 3 datasets. As we can see in those figures, when model size is small, increasing group size can significantly improve test performance especially on CIFAR-10 and SVHN. But as model size increase, the performance improvement start to decrease, test error of models with big group size is even worse than dropout network on SVHN (method A with group size 1 is equal to dropout).

Figure in 6 shows the convergence properties of our 2 methods on MNIST dataset with model width 256. As we can see in those figure, for both methods, models with big group size do converge slower, but not slow too much.

In our experiment, relu is not inreplaceable, but do perform slightly better.

We introduced a novel view to understand how dropout works as a layer-wise ensemble learning method, and proposed a new ensemble training algorithm named internal node bagging. We tested 2 sample methods in our experiments: method A can be seen as generalization of dropout, method B can be seen as generalization of standard network. For method A, increasing group size can significantly improve test performance on small models. For method B, increasing group size can moderately improve performance both on small models and big models, but it performs quite different on 3 different datasets. We also introduced 2 way to understand how internal node bagging works: the first one thinks our method is equivalent to simplify big redundant models to small models without redundancy, the second one thinks our method is equivalent to estimate the parameters of every internal node by multiple nodes in train time. It seems the second one is more reasonable basing on our experiments.