Interaction of Multiple Tensor Product Operators of the Same Type: an Introduction 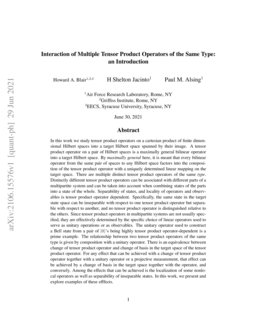 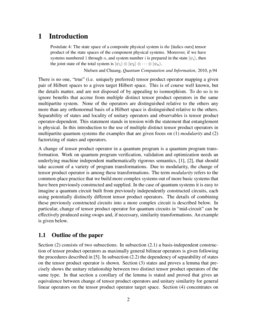 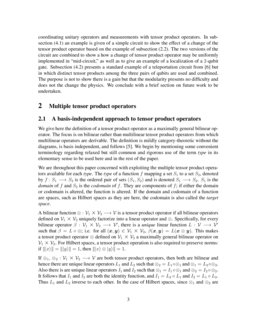 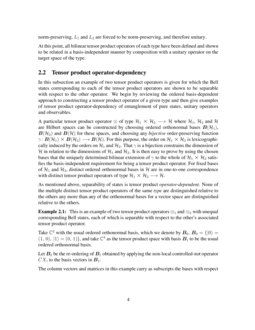 Projections onto hyperbolas or bilinear constraint sets in Hilbert spaces

1.1 Outline of the paper

4.2) presents a standard example of a teleportation circuit from [6] but in which distinct tensor products among the three pairs of qubits are used and combined. The purpose is not to show there is a gain but that the modularity presents no difficulty and does not the change the physics. We conclude with a brief section on future work to be undertaken.

We give here the definition of a tensor product operator as a maximally general bilinear operator. The focus is on bilinear rather than multilinear tensor product operators from which multilinear operators are derivable. The definition is mildly category-theoretic without the diagrams, is basis independent, and follows [5]. We begin by mentioning some convenient terminology regarding relaxed but still common and rigorous use of the term type in its elementary sense to be used here and in the rest of the paper.

We are throughout this paper concerned with exploiting the multiple tensor product operators available for each type. The type of a function f mapping a set S1 to a set S2, denoted by f:S1⟶S2

is the ordered pair of sets

If ⊗1,⊗2:V1 \large× V2⟶V are both tensor product operators, then both are bilinear and hence there are unique linear operators L1 and L2 such that ⊗2=L1∘⊗1 and ⊗1=L2∘⊗2. Also there is are unique linear operators I1 and I2 such that ⊗1=I1∘⊗1 and ⊗2=I2∘⊗2. It follows that I1 and I2 are both the identity function, and I1=L2∘L1 and I2=L1∘L2. Thus L1 and L2 inverse to each other. In the case of Hilbert spaces, since ⊗1 and ⊗2 are norm-preserving, L1 and L2 are forced to be norm-preserving, and therefore unitary.

At this point, all bilinear tensor product operators of each type have been defined and shown to be related in a basis-independent manner by composition with a unitary operator on the target space of the type.

A particular tensor product operator ⊗ of type where H1, H2 and H are Hilbert spaces can be constructed by choosing ordered orthonormal bases B(H1), B(H2) and B(H) for these spaces, and choosing any bijective order-preserving function γ:B(H1) \large× B(H2)⟶B(H). For this purpose, the order on H1 \large× H2 is lexicographically induced by the orders on H1 and H2. That γ is a bijection constrains the dimension of H in relation to the dimensions of H1 and H2. It is then easy to prove by using the chosen bases that the uniquely determined bilinear extension of γ to the whole of H1 \large× H2 satisfies the basis-independent requirement for being a tensor product operator. For fixed bases of H1 and H2, distinct ordered orthonormal bases in H are in one-to-one correspondence with distinct tensor product operators of type .

Let B2 be the re-ordering of B1 obtained by applying the non-local controlled-not operator CX, to the basis vectors in B1.

The column vectors and matrices in this example carry as subscripts the bases with respect to which they are written. B1 is then given by,

A controlled-not operator is clearly dependent on the computational basis in hand. In particular, CX relative to B1 is given by the familiar self-adjoint Hermitian matrix,

Since CX is self-adjoint, the matrix for CX has the same form relative to both bases in this case. (Being self-adjoint is not essential to this and subsequent examples, except where specifically noted.) Let ⊗2=CX∘⊗1, and therefore ⊗1=(CX)†∘⊗2=CX∘⊗2. In the following equation, (4), CX is non-local, so the result is not surprising. However, neither of these two tensor product operators is distinguished relative to the other, despite one of the ordered bases, B1, being standard, the other not. (Just change the coordinate system.) Then,

The equations in (4) show that the indicated Bell state corresponding to each of the tensor product operators, ⊗1, ⊗2, is separable relative to the other.

Note that the expected basic algebraic rules for Kronecker product operators on matrices holds, provided the matrices are written with respect to the appropriate ordered bases.

[Vectors] for a uniquely determined unitary operator W on H,

[Vectors] W, the unitary operator in (5), is uniquely determined by satisfying:

Proof: The existence and uniqueness of a unitary operator W satisfying (5) has been proved in the argument of subsection (2.1). Equation (6), explicitly useful for matrix calculations, is a trivial consequence of (5). For (7) we have,

For any bipartite quantum circuit C using ⊗, consider the circuit C′ that results from C obtained by replacing ⊗ by ⊗′ and every gate and observable by the result of the similarity transform WW†. The corollary below shows that \sf C′ is equivalent to C in the sense that the evolution of any state W|ψ1⟩ through C′ to a state W|ψ2⟩ corresponds to the evolution of |ψ1⟩ through C to |ψ2⟩. This is shown by (9) below.

and for any vector |x⟩∈H

where the second equality follows from (7) in the lemma. (9) is trivial, but nevertheless important as remarked upon above.

With respect to a single tensor product operator, any general linear operator may fail to be local, yet may be unitarily similar to a local operator. The term localizable operator is used in that case.

There exists operators, e.g. CX and CZ, that are nonlocalizable relative to any ordered orthonormal basis are said to be non-localazable. Since CX and CZ are self-adjoint they also serve as nonlocalizable observables.

4.1 An example of coordination

In this subsection we present a standard example of a teleportation circuit from [6] but in which distinct tensor products among the three pairs of qubits are used and combined. The purpose is not to show there is a gain but that the modularity presents no difficulty and does not the change the physics (as expected). A nontrivial example of a localizable non-local gate is given in this subsection.

The formation of a Bell state, such as |β00⟩, is often given by applying a controlled-not operator to the result of applying a Hadamard operator to one of a pair of qubits initially in state |0⟩⊗|0⟩:

If for the pair of qubits (Q1,Q2), the operator ⊗1 is replaced by ⊗2, then the Bell state |β00⟩⊗2 is formed. By (4), the state |+⟩⊗1|0⟩ is also formed because it is identical to |β00⟩⊗2. Similarly, if in addition to replacing ⊗1 by ⊗2, the CX gate is eliminated, then the CX gate is effectively built into the tensor product operator for the pair (Q1,Q2) and the state formed, |+⟩⊗2|0⟩, is |β00⟩⊗1 as given by the circuit below:

The point of this example is not to show there is a gain by eliminating the CX gate. Rather, it is to show that both operators (gates in the case of circuits) and observables for multipartite systems must be chosen and coordinated with the tensor product operators that combine the states of the separate parts of such systems.

Suppose now that the state space of the circuit of both qubits is C4 with each of the qubits having state space C2. In modifying (12) to obtain (13), the change from tensor product operator ⊗1 to ⊗2 re-orders the computational basis so that for example |1⟩⊗2|0⟩ is |1⟩⊗1|1⟩ and results in the overall state in circuit (13) immediately after the Hadamard gate being the same as it is in (12) after the CX gate, as shown in the circuit diagram. Suppose Q2 is measured into its computational basis immediately following the CX gate in (12) and the Hadamard gate in (13). In (12) we obtain |0⟩2 or |1⟩2

with equal probability. In (

13) we obtain |0⟩2 with certainty even though we are measuring the same state of the overall state of the circuit in each case. We get different results because the (implicit) observables are different in the two cases. Specifically, an observable for the projective measurement into the computational basis of Q2, considered in isolation, is Z. An observable M for the measurement of the combined system of both qubits in (12) is given by I⊗1Z=I⊗1(|0⟩⟨0|−|1⟩⟨1|). Let P1 and P−1 be the orthogonal projection operators in the spectral decomposition of I⊗1Z. In (13), by lemma (3.1) the observable is given by I⊗2Z=(CX)(I⊗1Z)(CX)=Z⊗1Z=(|0⟩⟨0|−|1⟩⟨1|)⊗1(|0⟩⟨0|−|1⟩⟨1|) with corresponding orthogonal projection operators Q1 and Q2. Then for the circuit (12) we have the two possible post-measurement states

The second of these two post-measurement states is undefined, and the first has unit probably. The distinct observables for these two circuits show that if the projective measurement into the computational basis of H(Q1)⊗H(Q2) as part (13) is carried out with respect to the observable corresponding to ⊗2 while ⊗1 holds between Q1 and Q2, the improper coordination of the observable with the tensor product operator results in an unintended distribution on the possible results of the measurement.

Change of tensor product operator from ⊗1 to ⊗2 in either of these circuits can result in the localization of some measurements. Consider a joint projective measurement of the qubits into the eigenstates of observable

which is a local with respect to ⊗2 since

In the following subsection, we show how to combine these extra tensor product operators with ⊗1 and ⊗2 to produce states of the 4-qubit circuit.

This subsection presents a standard example of a teleportation circuit from [6] but in which distinct tensor products among the three pairs of qubits are used and combined. The purpose of this exercise is not to show there is a gain but rather to demonstrate that the modularity presents no difficulty and does not change the physics. In addition, a nontrivial example of a localizable non-local operator is given in this subsection.

Consider the following well-known 3-qubit quantum circuit to teleport the state of one of Alice’s qubits to Bob’s qubit where Alice and Bob share the Bell state |β00⟩ at the start of the process, [6].

Two of the bases are given by: B(HA2⊗HB)=B1 and B(HA1⊗HB)=B2 and the third is given by B(HA1⊗HA2)=B3, where B3 is derived from the Bell basis with respect to ⊗1, and is given by

Thus, ⊗3 combines the subsystem consisting of qubits A1 and A2, ⊗2 combines A1 and B, and ⊗1 combines A2 and B. The corresponding matrix for the similarity transformation S†  –––S for a change of basis from B1 to B3 is

B3 yields a third tensor product operator ⊗3 such that

Let H=C8 be the state space of the circuit, and choose any fixed ordered orthonormal basis B of H and denote it by

An expression such as

is not rigorously defined. To be rigorously defined the operator ⊗1 would have to map, in particular, a pair of states, one of which is 4-level, and the other 2-level, to an 8-level state while also mapping a pair of 2-level states to a 4-level state. Thus, the expression is ill-typed due to both an implicit overloading of the symbol ⊗1 and an ambiguous grouping. A rigorous means of treating this obstacle is to define several tensor product operators as in the following. Define three tensor product operators: For each i,j,k∈{0,1},

Prefix notation is used in these auxiliary tensor product operator definitions since it is necessary in the case of ⊗A2(A1B). With these operators the successive states of (19) can be calculated. Let the initial state of A1 be a|0⟩+b|1⟩. We then have