Building Spoken Language Understanding (SLU) systems that do not rely on language specific Automatic Speech Recognition (ASR) is an important yet less explored problem in language processing. In this paper, we present a comparative study aimed at employing a pre-trained acoustic model to perform SLU in low resource scenarios. Specifically, we use three different embeddings extracted using Allosaurus, a pre-trained universal phone decoder: (1) Phone (2) Panphone, and (3) Allo embeddings. These embeddings are then used in identifying the spoken intent. We perform experiments across three different languages: English, Sinhala, and Tamil each with different data sizes to simulate high, medium, and low resource scenarios. Our system improves on the state-of-the-art (SOTA) intent classification accuracy by approximately 2.11 for Sinhala and 7.00 Furthermore, we present a quantitative analysis of how the performance scales with the number of training examples used per intent. 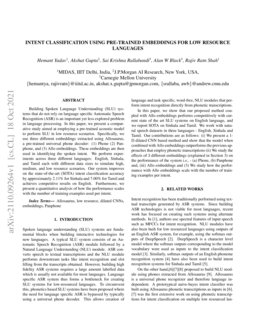 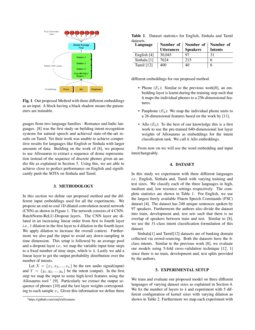 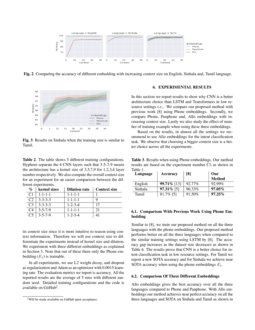 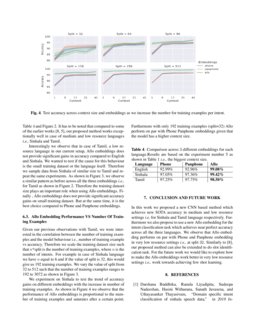 Chatbots are intelligent software built to be used as a replacement for ...
Fahim Shahriar Khan, et al. ∙

In this paper, we show that our proposed method coupled with Allo embeddings performs competitively with current state of the art SLU systems on English language, and we report SOTA on Sinhala and Tamil. We work with natural speech datasets in three languages - English, Sinhala and Tamil. Our contributions are as follows: (i) We present a 1-D dilated CNN based method and show that the model when combined with Allo embeddings outperforms the previous approaches that employ phonetic transcriptions (ii) We study the effects of 3 different embeddings (explained in Section 3) on the performance of the system i.e., - (a) Phone, (b) Panphone and, (iii) Allo embeddings and (3) We study how the performance with Allo embeddings scale with the number of training examples per intent.

Intent recognition has been traditionally performed using textual transcripts generated by ASR systems. Since building ASR technologies is not viable for most languages, recent work has focused on creating such systems using alternate methods. In [1], authors use spectral features of input speech such as MFCCs for intent recognition. NLU modules have also been built for low resourced languages using outputs of an English ASR system, for example, using the softmax outputs of DeepSpeech [5]. DeepSpeech is a character level model where the softmax outputs corresponding to the model vocabulary were used as inputs to the intent classification model [7]. Similarly, softmax outputs of an English phoneme recognition system [10] have also been used to build intent recognition systems for Sinhala and Tamil [6].

On the other hand,[3][2][4] proposed to build NLU module using phones extracted from Allosaurus [9]

[3]. [2] was the first extensive work on using phonetic transcriptions for intent classification on multiple low resourced languages from two language families - Romance and Indic languages. [4] was the first study on building intent recognition systems for natural speech and achieved state-of-the-art results on Tamil. Yet their work was unable to achieve competitive results for languages like English or Sinhala with larger amounts of data. Building on the work of [4], we propose to use Allosaurus to extract a sequence of dense representation instead of the sequence of discrete phones given an audio file as explained in Section 3. Using this, we are able to achieve close to perfect performance on English and significantly push the SOTA on Sinhala and Tamil.

In this section we define our proposed method and the different input embeddings used for all the experiments. We propose an end-to-end 1D dilated convolution neural network (CNN) as shown in Figure

. The network consists of 4 CNN-BatchNorm-ReLU-Dropout layers. The CNN layer are dilated in an increasing linear order from first to fourth layer

1 dilation in the first layer to 4 dilation in the fourth layer. We apply dilation to increase the overall context. Furthermore we also pad the input to avoid any down-sampling in time dimension. This setup is followed by an average pool and a dropout layer

i.e., we map the variable input time steps to a fixed number of time steps, which is 4

. Lastly we add a linear layer to get the output probability distribution over the number of intents.

Let X={x1,x2,...,xn} be the raw audio signal(input) and Y={y1,y2,...,yn} be the intent (output). In the first step we map the input to some high-level features using the Allosaurus tool 111https://github.com/xinjli/allosaurus [9]. Particularly we extract the output sequence of phones [11] and the last layer weights corresponding to each sample xi. Given this information we define three different embeddings for our proposed method.

From now on we will use the word embedding and input interchangeably.

In this study we experiment with three different languages i.e., English, Sinhala and, Tamil with varying training and test sizes. We classify each of the three languages in high, medium and, low resource settings respectively. The complete statistics are shown in Table 1. For English, we use the largest freely available Fluent Speech Commands (FSC) dataset [10]. The dataset has 248 unique sentences spoken by 97 speakers. Furthermore the authors also divide the dataset into train, development and, test sets such that there is no overlap of speakers between train and test. Similar to [4], we use the 31-class intent classification formulation of this dataset.

Sinhala[1] and Tamil[8] datasets are of banking domain collected via crowd-sourcing. Both the datasets have the 6-class intents. Similar to the previous work [4], we evaluate our models using 5-fold cross-validation technique [8, 1] since there is no train, development and, test splits provided by the authors.

We train and evaluate our proposed model on three different languages of varying dataset sizes as explained in Section 4. We fix the number of layers to 4 and experiment with 5 different configuration of kernel sizes with varying dilation as shown in Table 2. Furthermore we map each experiment with its context size since it is more intuitive to reason using context information. Therefore we will use context size to differentiate the experiments instead of kernel size and dilation. We experiment with three different embeddings as explained in Section 3. Note that out of these three only the Phone embedding (E1) is trainable.

In all experiments, we use L2 weight decay, and dropout as regularization and Adam as an optimizer with 0.0015 learning rate. The evaluation metrics we report is accuracy. All the reported results are the average of 5 runs with different random seed. Detailed training configurations and the code is available on GitHub

222Will be made available on GitHub upon acceptance..

In this section we report results to show why CNN is a better architecture choice than LSTM and Transformers in low resource settings i.e.,. We compare our proposed method with previous work [4] using Phone embeddings. Secondly, we compare Phone, Panphone and, Allo embeddings with increasing context size. Lastly we also study the effect of number of training example when using these three embeddings.

Based on the results, in almost all the settings we recommend to use Allo embeddings for the intent classification task. We observe that choosing a bigger context size is a better choice across all the experiments.

Similar to [4], we train our proposed method on all the three languages with the phone embeddings. Our proposed method performs better on all the three languages when compared to the similar training settings using LSTM by [4]. The accuracy gap increases as the dataset size decreases as shown in Table 3. The results prove that CNN is a better choice for intent classification task in low resource settings. For Tamil we report a new SOTA accuracy and for Sinhala we achieve near SOTA accuracy when using the phone embeddings E1.

Allo embeddings gives the best accuracy over all the three languages compared to Phone and Panphone. With Allo embeddings our method achieves near perfect accuracy on all the three languages and SOTA on Sinhala and Tamil as shown in Table 4 and Figure 2. It has to be noted that compared to some of the earlier works [4, 6], our proposed method works exceptionally well in case of medium and low resource languages i.e., Sinhala and Tamil.

Interestingly we observe that in case of Tamil, a low resource language in our current setup, Allo embeddings does not provide significant gains in accuracy compared to English and Sinhala. We wanted to test if the cause for this behaviour is the small training dataset or the language itself. Therefore we sample data from Sinhala of similar size to Tamil and repeat the same experiments. As shown in Figure 3, we observe a similar pattern as before across all the three embeddings i.e., for Tamil as shown in Figure 2. Therefore the training dataset size plays an important role when using Allo embeddings. Finally , Allo embeddings does not provide significant accuracy gains on small training dataset. But at the same time, it is the best choice compared to Phone and Panphone embeddings.