Intelligent Reflecting Surface (IRS) has been a promising solution to enhance wireless networks both spectral-efficiently and energy-efficiently. This paper considers an IRS-assisted the Internet of Things network for massive connectivity. We aim to solve the IRS-related activity detection and channel estimation problem which has not been studied before. In this paper, we formulate the IRS-related activity detection and channel estimation problem as sparse matrix factorization, matrix completion and Multiple Measurement Vector problem and, we propose a three-stage framework based on the approximate message passing. Simulation results verify the effectiveness of the proposed algorithm. 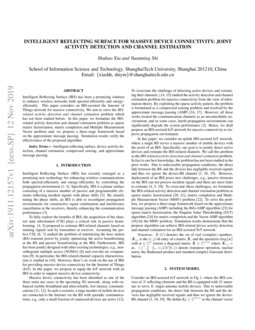 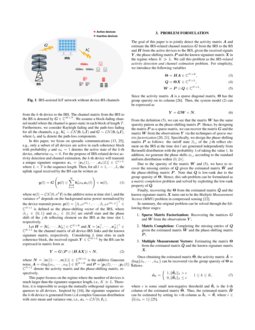 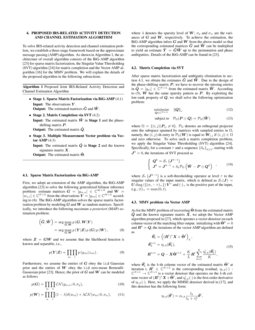 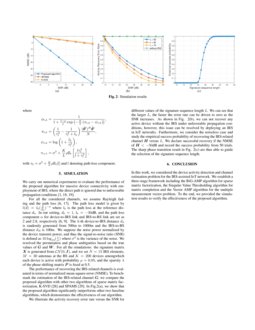 Intelligent Reflecting Surface (IRS) has recently emerged as a promising new technology for enhancing wireless communications both spectral-efficiently and energy-efficiently by controlling the propagation environment [1, 2, 3]. Specifically, IRS is a planar surface consisting of a massive number of passive and programmable elements reflecting incident signals with phase shifts [3]. By smartly tuning the phase shifts, an IRS is able to reconfigure propagation environments for constructive signal combination and interference cancellation at the receivers, thereby enhancing the communication performance [3].

To fully explore the benefits of IRS, the acquisition of the channel state information (CSI) plays a critical role in passive beamforming. [4, 5] proposed to estimate IRS-related channels based on training signals sent by transmitter or receiver. Assuming the perfect CSI, [6, 7] studied the problem of minimizing the base station (BS) transmit power by jointly optimizing the active beamforming at the BS and passive beamforming at the IRS. Furthermore, IRS has been jointly designed with other existing technologies, e.g., non-orthogonal multiple access (NOMA) [8] and over-the-air computation [9]. In particular, the IRS-related channel capacity characterization is studied in [10]. However, there’s no work on the use of IRS for providing massive device connectivity for the Internet of Things (IoT). In this paper, we propose to equip the IoT network with an IRS in order to support massive device connectivity.

Massive device connectivity has been identified as one of the three main use cases in the upcoming 5G network, along with enhanced mobile broadband and ultra-reliable, low-latency communications [11, 12]. In such a scenario, a large number of mobile devices are connected to the Internet via the BS with sporadic communications, e.g., only a small fraction of connected devices are active [13]. To overcome the challenge of detecting active devices and estimating their channels, [14, 15] studied the activity detection and channel estimation problem for massive connectivity from the view of information theory. By exploiting the sparse activity pattern, the problem is formulated as a compressed sensing problem and resolved by the approximate message passing (AMP) [16, 17]. However, all these works treated the communication channels as an uncontrollable environment, and in some cases, harsh propagation environments can significantly degrade the system performance [2]. Hence, we shall propose an IRS-assisted IoT network for massive connectivity to improve propagation environment.

In this paper, we consider an uplink IRS-assisted IoT network, where a single BS serves a massive number of mobile devices with the assist of an IRS. Specifically, our goal is to jointly detect active devices and estimate the IRS-related channels. We call this problem as the IRS-related activity detection and channel estimation problem. In fact to our best knowledge, the problem has not been studied in the prior works. Due to unfavorable propagation conditions, the direct link between the BS and the devices has negligible received signals and thus we ignore the device-BS channel [18, 1, 19]. However, deployment of an IRS poses new challenges, e.g., passive elements on the IRS can not process incident signals and there are more links to estimate [4, 5, 10]. To overcome these challenges, we formulate the IRS-related activity detection and channel estimation problem as sparse matrix factorization [20, 21], matrix completion and Multiple Measurement Vector (MMV) problem [22]. To solve the problem, we propose a three-stage framework based on the approximate message passing (AMP) including the BiG-AMP algorithm [23]

[24] for matrix completion and the Vector AMP algorithm [16] for the MMV problem. Simulation results demonstrate that the propose algorithm can achieve IRS-related device activity detection and channel estimation for an IRS-assisted ToT network.

Consider an IRS-assisted IoT network in Fig 1, where the IRS consists of N reflecting elements and the BS is equipped with M antennas to serve K single-antenna mobile devices. Due to unfavorable propagation conditions, the direct link between the BS and the devices has negligible received signals and thus we ignore the device-BS channel [18, 1, 19]. We define hrk∈CN×1 as the channel vector from the k-th device to the IRS. The channel matrix from the IRS to the BS is denoted by G∈CM×N. We assume a block-fading channel model where the channel is quasi-static in each block of length T. Furthermore, we consider Rayleigh fading and the path-loss fading for all the channels, e.g., hrk∼CN(0,lkI) and G∼CN(0,lRI), where lk and lR denote the path-loss components.

In this paper, we focus on sporadic communications [13, 25]

, e.g., only a subset of all devices are active in each coherence block with probability

ρ and αk=1 denotes the active state of the k-th device, otherwise αk=0. For the propose of IRS-related device activity detection and channel estimation, the k-th device will transmit a unique signature sequence xk=[xk(1),⋯,xk(L)]∈C1×L where L<T is the sequence length. Then, for all l=1,⋯,L, the uplink signal received by the BS can be written as

where n(l)∼CN(0,σ2I) is the additive noise at time slot l

σ2 depends on the background noise power normalized by the device transmit power. p(l)=[βl,1eȷϕl,1,⋯,βl,Neȷϕl,N]⊤∈CN×1 is defined as the phase-shifting vector of the IRS, where βl,j∈{0,1} and ϕl,j∈(0,2π] are on/off state and the phase shift of the j-th reflecting element on the IRS at the time slot l, respectively.

Let H=[hr1,⋯,hrK]∈CN×K and X=[x⊤1,⋯,x⊤K]⊤∈CK×L be the channel matrix of all device-IRS links and the known signature matrix, respectively. Considering L time slots in each coherence block, the received signals Y∈CM×L by the BS can be expressed in matrix form as

where N=[n(1)⋯,n(L)]∈CM×L is the additive Gaussian noise, A=diag{α1,⋯,αK}∈RK×K and P=[p1(l),⋯,pL(l)]∈CN×L denote the activity matrix and the phase-shifting matrix, respectively.

The goal of this paper is to jointly detect the activity matrix A and estimate the IRS-related channel matrices G from the IRS to the BS and H from the active devices to the IRS, given the received signals Y, the phase-shifting matrix P and the known signature matrix X in the regime where K≫L. We call this problem as the IRS-related activity detection and channel estimation problem. For simplicity, we introduce the following variables

Since the activity matrix A is a sparse diagonal matrix, Θ has the group sparsity on its column [26]. Then, the system model (2) can be expressed as

are generated independently from Bernoulli distribution with the probability

λ of taking the value 1. In addition, we generate the phase shifts ϕl,j

according to the standard uniform distribution within

Due to the sparsity of the matrix W and (5), we have to recover the missing entries of Q given the estimated matrix ^W and the phase-shifting matrix P. Note that Q is low-rank due to the group sparsity of Θ. Hence, this sub-problem can be formulated as a matrix completion problem and solved by exploiting the low-rank property of Q.

Finally, recovering the Θ from the estimated matrix ^Q and the known signature matrix X turns out to be the Multiple Measurement Vectors (MMV) problem in compressed sensing [22].

In summary, the original problem can be solved through the following three stages:

Once obtaining the estimated matrix ^Θ, the activity matrix ^A=diag{^α1,⋯,^αK} can be recovered via the group sparsity of Θ as follows

To solve IRS-related activity detection and channel estimation problem, we establish a three-stage framework based on the approximate message passing (AMP) algorithm. As shown in Algorithm 1, the architecture of overall algorithm consists of the BiG-AMP algorithm [23] for sparse matrix factorization, the Singular Value Thresholding (SVT) algorithm [24] for matrix completion and the Vector AMP algorithm [16] for the MMV problem. We will explain the details of the proposed algorithm in the following subsections.

where Z=GW and we assume that the likelihood function is known and separable, i.e.,

where λ denotes the sparsity level of W; σg and σw are the variances of G and W, respectively. To achieve the estimation, the BiG-AMP algorithm infers G and W from the above model so that the corresponding estimated matrices ^G and ^W can be multiplied to yield an estimate ^Y=^G^W up to the permutation and phase ambiguities. Details of the BiG-AMP can be found in [23].

After sparse matrix factorization and ambiguity elimination in section 4.1, we obtain the estimates ^G and ^W. Due to the design of the phase-shifting matrix P, we have to recover the missing entries in Q=[qnl]∈CN×L from the estimated matrix ^W. According to (5), W has the same sparsity pattern as P. By exploiting the low-rank property of Q, we shall solve the following optimization problem:

where Ω={(i,j)|Pij≠0}. PΩ denotes an orthogonal projector onto the subspace spanned by matrices with sampled entries in Ω, namely, the (i,j)-th entry in PΩ(W) is equal to Wi,j if (i,j)∈Ω and zero otherwise. To solve such a matrix completion problem, we apply the Singular Value Thresholding (SVT) algorithm [24]. Specifically, for a constant τ and a sequence {δk}k≥1, starting with J0=0, the iterations of SVT proceed as

As for the MMV problem of recovering ^Θ from the estimated matrix ^Q and the known signature matrix X, we adopt the Vector AMP algorithm proposed in [27], which operates a vector denoiser on each column vector of the matching filter output. initializing with ^Θ0=0 and R0=Q, the iterations of the vector AMP algorithm are defined as

We carry out numerical experiments to evaluate the performance of the proposed algorithm for massive device connectivity with employment of IRS, where the direct path is ignored due to unfavorable propagation conditions [18, 1, 19].

is 100m. We suppose the noise power normalized by the device transmit power, and thus the signal-to-noise ratio (SNR) is defined as

10log10(1σ) where σ2 is the variance of the noise. We resolved the permutation and phase ambiguities based on the true values of G and W. For all the simulations: the signature matrix X is generated from CN(0,I), and we set N=15 IRS elements, M=30 antennas at the BS and K=200 devices among which each device is active with probability ρ=0.05, and the sparsity λ of the phase-shifting matrix P is fixed at 0.5.

The performance of recovering the IRS-related channels is evaluated in terms of normalized mean-square-error (NMSE). To benchmark the estimation of the IRS-related channel G, we compare the proposed algorithm with other two algorithms of sparse matrix factorization, K-SVD [28] and SPAMS [29]. In Fig.2, we show that the proposed algorithm significantly outperforms other two baseline algorithms, which demonstrates the effectiveness of our algorithm.

We illustrate the activity recovery error rate versus the SNR for different values of the signature sequence length L. We can see that the larger L, the faster the error rate can be driven to zero as the SNR increases. As shown in Fig. 2, we can not recover any active device without the IRS under unfavorable propagation conditions, however, this issue can be resolved by deploying an IRS in IoT networks. Furthermore, we consider the noiseless case and study the empirical success probability of recovering the IRS-related channel H versus L. We declare successful recovery if the NMSE of H<−50

dB and record the success probability from 50 trials. The sharp phase transition result in Fig.

2 are thus able to guide the selection of the signature sequence length.

In this work, we considered the device activity detection and channel estimation problem for the IRS-assisted IoT network. We establish a three-stage framework including the BiG-AMP algorithm for sparse matrix factorization, the Singular Value Thresholding algorithm for matrix completion and the Vector AMP algorithm for the multiple measurement vector problem. To the end, we provided the simulation results to verify the effectiveness of the proposed algorithm.