We prove that if q_1, ..., q_m: R^n ⟶ R are quadratic forms in variables x_1, ..., x_n such that each q_k depends on at most r variables and each q_k has common variables with at most r other forms, then the average value of the product (1+ q_1) ...(1+q_m) with respect to the standard Gaussian measure in R^n can be approximated within relative error ϵ >0 in quasi-polynomial n^O(1) m^O(ln m -lnϵ) time, provided |q_k(x)| ≤γx^2 /r for some absolute constant γ > 0 and k=1, ..., m. When q_k are interpreted as pairwise squared distances for configurations of points in Euclidean space, the average can be interpreted as the partition function of systems of particles with mollified logarithmic potentials. We sketch a possible application to testing the feasibility of systems of real quadratic equations. 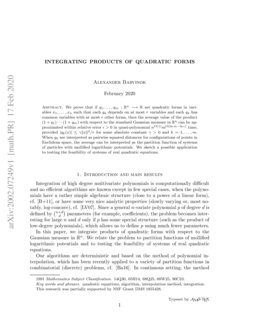 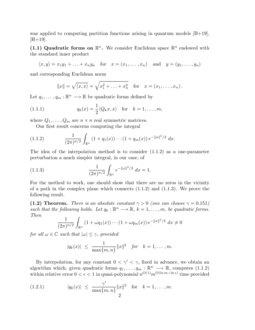 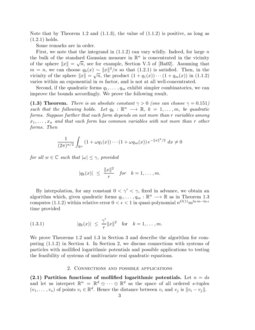 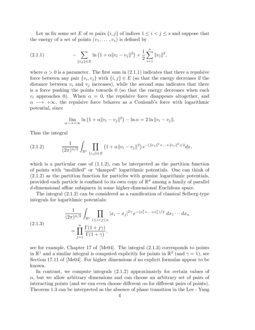 More on zeros and approximation of the Ising partition function

Integrating a product of linear forms over the unit simplex can be done ...
Giuliano Casale, et al. ∙

Integration of high degree multivariate polynomials is computationally difficult and no efficient algorithms are known except in few special cases, when the polynomials have a rather simple algebraic structure (close to a power of a linear form), cf. [B+11], or have some very nice analytic properties (slowly varying or, most notably, log-concave), cf. [LV07]. Since a general n-variate polynomial p of degree d is defined by (n+dd) parameters (for example, coefficients), the problem becomes interesting for large n and d only if p has some special structure (such as the product of low-degree polynomials), which allows us to define p using much fewer parameters.

In this paper, we integrate products of quadratic forms with respect to the Gaussian measure in Rn. We relate the problem to partition functions of mollified logarithmic potentials and to testing the feasibility of systems of real quadratic equations.

The idea of the interpolation method is to consider (1.1.2) as a one-parameter perturbation a much simpler integral, in our case, of

For the method to work, one should show that there are no zeros in the vicinity of a path in the complex plane which connects (1.1.2) and (1.1.3). We prove the following result.

By interpolation, for any constant 0<γ′<γ, fixed in advance, we obtain an algorithm which, given quadratic forms q1,…,qm:Rn⟶R, computes (1.1.2) within relative error 0<ϵ<1 in quasi-polynomial nO(1)mO(lnm−lnϵ) time provided

Some remarks are in order.

Second, if the quadratic forms q1,…,qm exhibit simpler combinatorics, we can improve the bounds accordingly. We prove the following result.

By interpolation, for any constant 0<γ′<γ, fixed in advance, we obtain an algorithm which, given quadratic forms q1,…,qm:Rn⟶R as in Theorem 1.3 computes (1.1.2) within relative error 0<ϵ<1 in quasi-polynomial nO(1)mlnm−lnϵ time provided

We prove Theorems 1.2 and 1.3 in Section 3 and describe the algorithm for computing (1.1.2) in Section 4. In Section 2, we discuss connections with systems of particles with mollified logarithmic potentials and possible applications to testing the feasibility of systems of multivariate real quadratic equations.

where α>0 is a parameter. The first sum in (2.1.1) indicates that there a repulsive force between any pair {vi,vj} with {i,j}∈E (so that the energy decreases if the distance between vi and vj increases), while the second sum indicates that there is a force pushing the points towards 0 (so that the energy decreases when each vi approaches 0). When α=0, the repulsive force disappears altogether, and α⟶+∞, the repulsive force behaves as a Coulomb’s force with logarithmic potential, since

which is a particular case of (1.1.2), can be interpreted as the partition function of points with “mollified” or “damped” logarithmic potentials. One can think of (2.1.2) as the partition function for particles with genuine logarithmic potentials, provided each particle is confined to its own copy of Rd among a family of parallel d-dimensional affine subspaces in some higher-dimensional Euclidean space.

The integral (2.1.2) can be considered as a ramification of classical Selberg-type integrals for logarithmic potentials:

see for example, Chapter 17 of [Me04]. The integral (2.1.3) corresponds to points in R1 and a similar integral is computed explicitly for points in R2 (and γ=1), see Section 17.11 of [Me04]. For higher dimensions d no explicit formulas appear to be known.

In contrast, we compute integrals (2.1.2) approximately for certain values of α, but we allow arbitrary dimensions and can choose an arbitrary set of pairs of interacting points (and we can even choose different α

s for different pairs of points). Theorem 1.3 can be interpreted as the absence of phase transition in the Lee - Yang sense

[YL52], if α is sufficiently small. For example, if the set E consists of all (s2) pairs {i,j}, Theorem 1.3 implies that there is no phase transition (and the integral can be efficiently approximated) if

for some absolute constant β>0.

(2.2) Applications to systems of quadratic equations

where qk:Rn⟶R are positive semidefinite quadratic forms. Such systems naturally arise in problems of distance geometry, where we are interested to find out if there are configurations of points in Rd with prescribed distances between some pairs of points and in which case qk are scaled squared distances between points, see [CH88], [L+14] and Section 2.1. Besides, finding if a system of homogeneous quadratic equations has a non-trivial solution

can be reduced to (2.2.1) with positive definite forms qk by adding ∥x∥2 to the appropriately scaled equations in (2.2.2).

in (2.2.1). By itself, the condition (2.2.3) is not particularly restrictive: if the sum of in the left hand side of (2.2.3) is positive definite, it can be brought to the right hand side by an invertible linear transformation of

Let us choose an α>0 such that the scaled forms αqk satisfy (1.3.1), so that the integral

can be efficiently approximated. We would like to argue that the value of the integral (2.2.4) can provide a reasonable certificate which allows one to distinguish systems (2.2.1) with many “near solutions” x from the systems that are far from having a solution.

We observe that the system (2.2.1) has a solution if and only if the system

We observe that if α>β then the maximum value of

and is equal to

and hence the maximum value of the product of the m factors in (2.2.7) is

The Gaussian probability measure in

for some estimates. Therefore, if for the system (2.2.1) there are sufficiently many “near solutions”

x, we should have the value of the integral (2.2.4) sufficiently close to

while if the system (2.2.1) is far from having a solution, the value of the integral will be essentially smaller.

For a real symmetric n×n matrix Q we denote

where Q1,…,Qm are n×n real symmetric matrices such that

Here we take the principal branch of det−12 in the left hand side of (3.1.1), which is equal to 1 when z1=…=zm=0. The series in the right hand side converges absolutely and uniformly on compact subsets of the polydisc (3.1.2).

Since both sides of the above identity are analytic in the domain (3.1.2), we obtain

Expanding the integral in the right hand side into the series in z1,…,zm, we complete the proof. ∎

Next, we extract the integral (1.1.2) from the generating function of Lemma 3.1. Let

the the unit circle and let

where μk is the uniform probability measure on the k-th copy of S1. If s∈Zm, s=(s1,…,sm), then for the Laurent monomial

where Q1,…,Qm are n×n real symmetric matrices such that

where the second product is taken over all non-empty ordered tuples (k1,…,ks) of distinct indices from {1,…,m}.

where the series converges absolutely and uniformly on Tm.

We expand each of the exponential functions into the Taylor series and observe that only square-free monomials in z1,…,zm contribute to the integral (3.2.1), from which it follows that

where the second product is taken over all non-empty ordered tuples of distinct indices k1,…,ks∈{1,…,m}. ∎

Our next goal is to write the integral in Lemma 3.2 as the value of the independence polynomial of an appropriate (large) graph.

Let G=(V,E) be a finite undirected graph with set V of vertices, set E of edges and without loops or multiple edges. A set S⊂V of vertices is called independent, if no two vertices from S span an edge of G. We agree that S=∅ is an an independent set.

Let w:V⟶C be a function assigning to each vertex a complex weight w(v). We define the independence polynomial of G by

Hence IndG(w) is a multivariate polynomial in complex variables w(v) with constant term 1, corresponding to S=∅.

where Qk are real symmetric n×n matrices and let ω∈C be a complex number.

We define a weighted graph G=(V,E;w) as follows. The vertices of G are all non-empty ordered tuples (k1,…,ks) of indices k1,…,ks∈{1,…,m} and two vertices span an edge of G if they have at least one common index k, in arbitrary positions. We define the weight of the vertex (k1,…,ks) by

The following criterion provides a sufficient condition for IndG(w)≠0 for an arbitrary weighted graph G. The result is known as the Dobrushin criterion and also as the Kotecký - Preiss condition for the cluster expansion, see, for example, Chapter 5 of [FV18].

Let w:V⟶C be an assignment of complex weights to the vertices of G. Suppose that there is a function ρ:V⟶R+ with positive real values such that for every vertex v∈V, we have

Now we are ready to prove Theorem 1.3.

Let Q1,…,Qm be the matrices of the quadratic forms q1,…,qm, so that

Since each quadratic form qk depends of at most r variables, we have

Since each quadratic form qk has a common variable with at most r other forms, we have

The interpolation method is based on the following simple observation.

Let p:C⟶C be a polynomial,

and β>1 be a real number such that

be the Taylor polynomial of degree k of f computed at z=0. Then

As follows from Lemma 4.1, if β>1 is fixed in advance, to estimate the value of f(1) within additive error 0<ϵ<1 (in which case we say that we estimate the the value of p(1)=ef(1) within relative error ϵ), it suffices to compute the coefficients cs with s=O(lnn−lnϵ), where the implied constant in the “O” notation depends only on β. A similar result holds if p(z)≠0 in an arbitrary, fixed in advance, connected open set U⊂C such that {0,1}⊂U, see Section 2.2 of [Ba16] (in Lemma 4.1, the neighborhood U is the disc of radius β).

Let us fix a constant

where γ is the constant of Theorem 1.3 (so one can choose γ′=0.15). Let q1,…,qm:Rn⟶R be quadratic forms, defined by their matrices Q1,…,Qm as in (1.1.1), such that each form depends on not more than r variables among x1,…,xn and each form has common variables with not more than r other forms. Suppose that the bound (1.3.1) holds. We define a univariate polynomial p:C⟶C by

Hence degp≤m and by Theorem 1.3 we have

In view of Lemma 4.1, to approximate