Supervised distributional methods are applied successfully in lexical entailment, but recent work questioned whether these methods actually learn a relation between two words. Specifically, Levy et al. (2015) claimed that linear classifiers learn only separate properties of each word. We suggest a cheap and easy way to boost the performance of these methods by integrating multiplicative features into commonly used representations. We provide an extensive evaluation with different classifiers and evaluation setups, and suggest a suitable evaluation setup for the task, eliminating biases existing in previous ones. 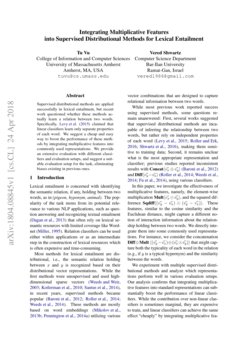 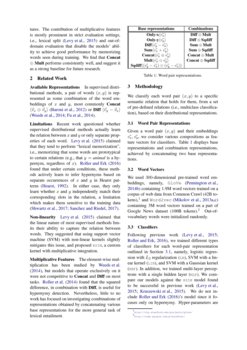 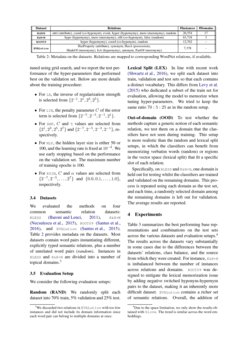 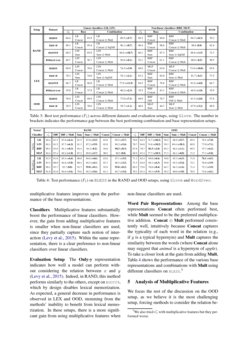 Lexical entailment is concerned with identifying the semantic relation, if any, holding between two words, as in (pigeon, hyponym, animal). The popularity of the task stems from its potential relevance to various NLP applications, such as question answering and recognizing textual entailment Dagan et al. (2013) that often rely on lexical semantic resources with limited coverage like Wordnet Miller (1995). Relation classifiers can be used either within applications or as an intermediate step in the construction of lexical resources which is often expensive and time-consuming.

Most methods for lexical entailment are distributional, i.e., the semantic relation holding between x and y

is recognized based on their distributional vector representations. While the first methods were unsupervised and used high-dimensional sparse vectors

In this paper, we investigate the effectiveness of multiplicative features, namely, the element-wise multiplication Mult⟨→vx⊙→vy⟩, and the squared difference Sqdiff⟨(→vy−→vx)⊙(→vy−→vx)⟩

. These features, similar to the cosine similarity and the Euclidean distance, might capture a different notion of interaction information about the relationship holding between two words. We directly integrate them into some commonly used representations. For instance, we consider the concatenation

Diff⊕Mult ⟨(→vy−→vx)⊕(→vx⊙→vy)⟩ that might capture both the typicality of each word in the relation (e.g., if y is a typical hypernym) and the similarity between the words.

We experiment with multiple supervised distributional methods and analyze which representations perform well in various evaluation setups. Our analysis confirms that integrating multiplicative features into standard representations can substantially boost the performance of linear classifiers. While the contribution over non-linear classifiers is sometimes marginal, they are expensive to train, and linear classifiers can achieve the same effect “cheaply” by integrating multiplicative features. The contribution of multiplicative features is mostly prominent in strict evaluation settings, i.e., lexical split Levy et al. (2015) and out-of-domain evaluation that disable the models’ ability to achieve good performance by memorizing words seen during training. We find that Concat ⊕ Mult performs consistently well, and suggest it as a strong baseline for future research.

Recent work questioned whether supervised distributional methods actually learn the relation between x and y or only separate properties of each word. Levy:15 claimed that they tend to perform “lexical memorization”, i.e., memorizing that some words are prototypical to certain relations (e.g., that y= animal is a hypernym, regardless of x

). Roller:16 found that under certain conditions, these methods actively learn to infer hypernyms based on separate occurrences of

x and y in Hearst patterns Hearst (1992). In either case, they only learn whether x and y independently match their corresponding slots in the relation, a limitation which makes them sensitive to the training data Shwartz et al. (2017); Sanchez and Riedel (2017).

Levy:15 claimed that the linear nature of most supervised methods limits their ability to capture the relation between words. They suggested that using support vector machine (SVM) with non-linear kernels slightly mitigates this issue, and proposed

The element-wise multiplication has been studied by Weeds:14, but models that operate exclusively on it were not competitive to Concat and Diff on most tasks. Roller:14 found that the squared difference, in combination with Diff, is useful for hypernymy detection. Nevertheless, little to no work has focused on investigating combinations of representations obtained by concatenating various base representations for the more general task of lexical entailment.

We classify each word pair (x,y)

to a specific semantic relation that holds for them, from a set of pre-defined relations (i.e., multiclass classification), based on their distributional representations.

L2 regularization (LR), SVM with a linear kernel (LIN), and SVM with a Gaussian kernel (RBF

). In addition, we trained multi-layer perceptrons with a single hidden layer (

MLP). We compare our models against the KSIM model found to be successful in previous work Levy et al. (2015); Kruszewski et al. (2015). We do not include Roller:16’s model since it focuses only on hypernymy. Hyper-parameters are tuned using grid search, and we report the test performance of the hyper-parameters that performed best on the validation set. Below are more details about the training procedure:

We evaluated the methods on four common semantic relation datasets: BLESS Baroni and Lenci (2011), K&H+N Necsulescu et al. (2015), ROOT09 Santus et al. (2016), and EVALution Santus et al. (2015). Table 2 provides metadata on the datasets. Most datasets contain word pairs instantiating different, explicitly typed semantic relations, plus a number of unrelated word pairs (random). Instances in BLESS and K&H+N are divided into a number of topical domains.333We discarded two relations in EVALution with too few instances and did not include its domain information since each word pair can belong to multiple domains at once.

We consider the following evaluation setups:

We randomly split each dataset into 70% train, 5% validation and 25% test.

In line with recent work Shwartz et al. (2016), we split each dataset into train, validation and test sets so that each contains a distinct vocabulary. This differs from Levy:15 who dedicated a subset of the train set for evaluation, allowing the model to memorize when tuning hyper-parameters. We tried to keep the same ratio 70:5:25 as in the random setup.

To test whether the methods capture a generic notion of each semantic relation, we test them on a domain that the classifiers have not seen during training. This setup is more realistic than the random and lexical split setups, in which the classifiers can benefit from memorizing verbatim words (random) or regions in the vector space (lexical split) that fit a specific slot of each relation.

Specifically, on BLESS and K&H+N, one domain is held out for testing whilst the classifiers are trained and validated on the remaining domains. This process is repeated using each domain as the test set, and each time, a randomly selected domain among the remaining domains is left out for validation. The average results are reported.

Table 3 summarizes the best performing base representations and combinations on the test sets across the various datasets and evaluation setups.444Due to the space limitation, we only show the results obtained with Glove. The trend is similar across the word embeddings. The results across the datasets vary substantially in some cases due to the differences between the datasets’ relations, class balance, and the source from which they were created. For instance, K&H+N is imbalanced between the number of instances across relations and domains. ROOT09 was designed to mitigate the lexical memorization issue by adding negative switched hyponym-hypernym pairs to the dataset, making it an inherently more difficult dataset. EVALution contains a richer set of semantic relations. Overall, the addition of multiplicative features improves upon the performance of the base representations.

The Only-y representation indicates how well a model can perform without considering the relation between x and y Levy et al. (2015). Indeed, in RAND, this method performs similarly to the others, except on ROOT09, which by design disables lexical memorization. As expected, a general decrease in performance is observed in LEX and OOD, stemming from the methods’ inability to benefit from lexical memorization. In these setups, there is a more significant gain from using multiplicative features when non-linear classifiers are used.

Among the base representations Concat often performed best, while Mult seemed to be the preferred multiplicative addition. Concat ⊕ Mult performed consistently well, intuitively because Concat captures the typicality of each word in the relation (e.g., if y is a typical hypernym) and Mult captures the similarity between the words (where Concat alone may suggest that animal is a hypernym of apple). To take a closer look at the gain from adding Mult, Table 4 shows the performance of the various base representations and combinations with Mult using different classifiers on BLESS.555We also tried →vx with multiplicative features but they performed worse.

We focus the rest of the discussion on the OOD setup, as we believe it is the most challenging setup, forcing methods to consider the relation between x and y. We found that in this setup, all methods performed poorly on K&H+N, likely due to its imbalanced domain and relation distribution. Examining the per-relation F1 scores, we see that many methods classify all pairs to one relation. Even KSIM, the best performing method in this setup, classifies pairs as either hyper or random, effectively only determining if they are related or not. We therefore focus our analysis on BLESS.

Interestingly, we found that across domains, there is an almost consistent order of relations with respect to mean intra-pair cosine similarity:

Since the difference between random (0.141) and other relations (0.279-0.426) was the most significant, it seems that multiplicative features help distinguishing between related and unrelated pairs. This similarity is possibly also used to distinguish between other relations.

We have suggested a cheap way to boost the performance of supervised distributional methods for lexical entailment by integrating multiplicative features into standard word-pair representations. Our results confirm that the multiplicative features boost the performance of linear classifiers, and in strict evaluation setups, also of non-linear classifiers. We performed an extensive evaluation with different classifiers and evaluation setups, and suggest the out-of-domain evaluation as the most suitable for the task. Directions for future work include investigating other compositions, and designing a neural model that can automatically learn such features.

We would like to thank Wei Lu for his involvement and advice in the early stage of this project, Stephen Roller and Omer Levy for valuable discussions, and the anonymous reviewers for their insightful comments and suggestions.