This paper proposes an algorithm to improve the calculation of confidence measure for spoken term detection (STD). Given an input query term, the algorithm first calculates a measurement named document ranking weight for each document in the speech database to reflect its relevance with the query term by summing all the confidence measures of the hypothesized term occurrences in this document. The confidence measure of each term occurrence is then re-estimated through linear interpolation with the calculated document ranking weight to improve its reliability by integrating document-level information. Experiments are conducted on three standard STD tasks for Tamil, Vietnamese and English respectively. The experimental results all demonstrate that the proposed algorithm achieves consistent improvements over the state-of-the-art method for confidence measure calculation. Furthermore, this algorithm is still effective even if a high accuracy speech recognizer is not available, which makes it applicable for the languages with limited speech resources. 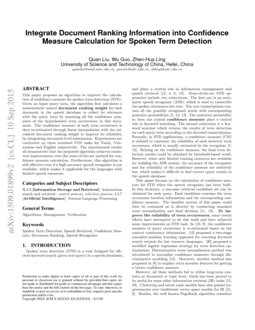 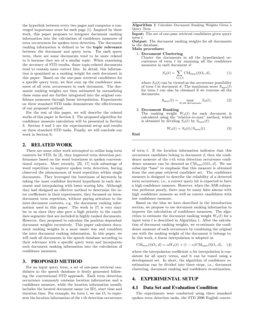 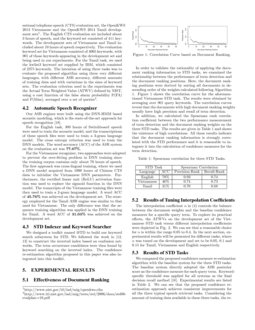 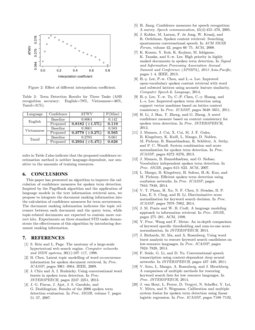 Spoken term detection (STD) is a task designed for efficient keyword search (given text query) in a speech databases, and plays a central role in information management and speech retrieval [12, 4, 6, 13]

. State-of-the-art STD approaches include two subsystems. The first one is an automatic speech recognizer (ASR), which is used to transcribe the spoken utterances into text. The text transcriptions contain all the possibly recognized words with corresponding posterior probabilities

[5, 12, 13]. The posterior probability as been one typical confidence measure plays a central role in keyword searching. The second subsystem is a keyword searcher which returns the results of term detection for each query term according to the decoded transcriptions. Formally, in STD applications, a confidence measure (CM) is defined to represent the reliability of each detected term occurrence, which is usually estimated by the recognizer [5, 12]. Relying on the confidence measure, the final term detection results could be obtained by threshold-based recall. However, when only limited training resources are available for building the ASR system, the accuracy of the recognizer and the reliability of the confidence measure are relatively low, which makes it difficult to find correct query results in the speech database.

This paper focuses on the calculation of confidence measure for STD when the speech recognizer has been built. In this situation, a one-pass retrieval candidate set can be obtained for each query. Each candidate contains the term occurrence location information and the corresponding confidence measure. The baseline system of this paper could then be evaluated on it directly by conducting standard score normalization and final decision [11, 13]. To improve the reliability of term occurrences, some recent efforts have attempted to do this work and have achieved some improvements on STD task. In [10, 9], the confidence measure of query occurrence is re-estimated based on the context consistency information. [19]

[14]. Moreover, another method was proposed in [8] to employ extra acoustic features for getting a better confidence measure.

However, all these methods fail to utilize long-term contexts at document or topic level, which has been proved to be useful for some other information retrieval (IR) tasks [15, 23]

[21, 2]. Besides, the well known PageRank algorithm considers the hyperlink between every two pages and computes a converged importance score for each page [1]. Inspired by these work, this paper proposes to integrate document ranking information into the calculation of confidence measures of term occurrences for spoken term detection. The document ranking information is defined to be the topic relevance between the document and query term. For each query term, there are some documents tend to be more related to it because they are of a similar topic. When examining the accuracy of STD results, those topic-related documents tend to contain more correct hits. In detail, this information is quantized as a ranking weight for each document in this paper. Based on the one-pass retrieval candidates for a specific query term, we first sum up the confidence measures of all term occurrences in each document. The document ranking weights are then estimated by normalizing these sums and are further integrated into the original confidence measures through linear interpolation. Experiments on three standard STD tasks demonstrate the effectiveness of our proposed method.

For the rest of this paper, we will describe the related works of this paper in Section 2. The proposed algorithm for confidence measure calculation will be presented in Section 3. Section 4 and 5 are the experimental setup and results on three standard STD tasks. Finally, we will conclude our work in Section 6.

There are some other work attempted to utilize long-term contexts for STD. In [3], they improved term detection performance based on the word burstiness in spoken conversational corpora. More recently, [22, 17] took advantage of word repetition to improve spoken term detection, having observed the phenomenon of word repetition within single documents. They leveraged the burstiness of keywords by taking the most confident keyword hypothesis in each document and interpolating with lower scoring hits. Although they had designed an effective method to determine the inter coefficients in their experiments, they focussed on intra-document term repetition, without paying attention to the inter-document contexts, e.g. the document ranking information used in this paper. The work in [7] is very similar to us since they also gave a high priority to the candidate segments that are included in highly ranked documents. However, they proposed to calculate the position dependent document weights recursively. This paper calculates document ranking weights in a more easier way and considers the inter document ranking information. In this paper, we will rank all documents in the speech database according to their relevance with a specific query term and incorporate such document ranking information into the calculation of confidence measures.

The experiments were conducted using three standard spoken term detection tasks, the STD 2006 English conversational telephone speech (CTS) evaluation set, the OpenKWS 2013 Vietnamese and the OpenKWS 2014 Tamil development sets111http://www.nist.gov/itl/iad/mig/openkws.cfm. The English CTS evaluation set included about 3 hours of speech, and the keyword set consisted of 411 keywords. The development sets of Vietnamese and Tamil included about 10 hours of speech respectively. The evaluation keyword set for Vietnamese consisted of 4065 keywords, with 901 of those keywords appearing in the development set and being used in our experiments. For the Tamil task, we used the kwlist3 keyword set supplied by IBM, which consisted of 2375 keywords. The intention of using three tasks was to evaluate the proposed algorithm using three very different languages, with different ASR accuracy, different amounts of training data and with variations in the sizes of keyword sets. The evaluation criterion used in the experiments was the Actual Term Weighted Value (ATWV) defined by NIST, using a cost function of the false alarm probability P(FA) and P(Miss), averaged over a set of queries222http://www.itl.nist.gov/iad/mig/tests/std/2006/docs/std06-evalplan-v10.pdf.

Our ASR engines were built using the DNN-HMM based acoustic modeling, which is the state-of-the-art approach for speech recognition [18].

For the Vietnamese recognizer, two approaches were adopted to prevent the over-fitting problem in DNN training since the training corpus contains only about 70 hours of speech. The first approach was cross-lingual training, where we used a DNN model acquired from 1000 hours of Chinese CTS data to initialize the Vietnamese DNN parameters. Furthermore, the rectified linear unit (ReLU) activation function was used to replace the sigmoid function in the DNN model. The transcripts of the Vietnamese training files were then used to train a 2-gram language model. A word ACC of

We designed a toolkit named iSTD to build our keyword search subsystem for STD. We followed the work in [12, 13] to construct the inverted index based on confusion networks. The term occurrence candidates were then found by keyword searching on the inverted index. The confidence re-estimation algorithm proposed in this paper was also integrated into this toolkit.

shows the correlation curve for the aforementioned Vietnamese STD task. The results were obtained by averaging over 901 query keywords. The correlation curves reveal that the documents with high document ranking weights usually have high precision and recall of term detection.

In addition, we calculated the Spearman rank correlation coefficient between the two performance measurement of term detection and the document ranking weights on the three STD tasks. The results are given in Table 1 and shows the existence of high correlations. All these results indicate that the document ranking information is strongly correlated with the STD performance and it is reasonable to integrate it into the calculation of confidence measures for the term detection.

The interpolation coefficient α in (4) controls the balance between the document weights and the baseline confidence measures for a specific query term. To explore its practical effcets, the ATWVs on the development set of the Vietnamese STD task versus different interpolation coefficients were depicted in Fig. 2. We can see that a reasonable choice for α is within the range 0.05 to 0.4. In the next section, experimental results will be presented for different tasks, where α was tuned on the development and set to be 0.05, 0.1 and 0.15 for Tamil, Vietnamese and English respectively.