Integral Representations and Quadrature Schemes for the Modified Hilbert Transformation 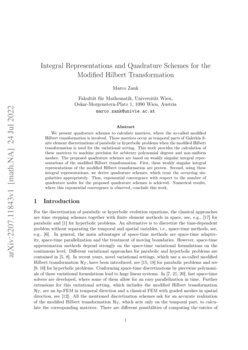 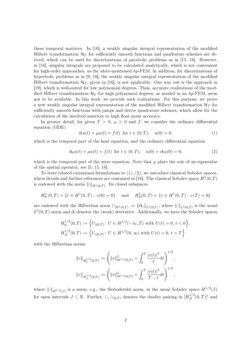 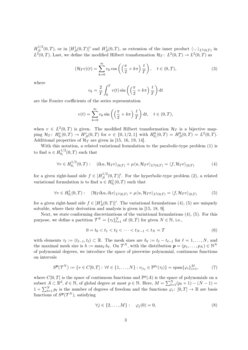 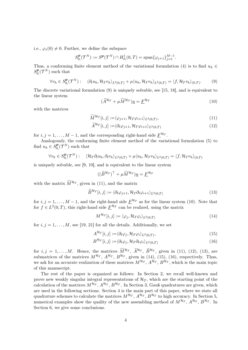 The aim of this paper is to study the time stepping scheme for approxima...
Minghua Chen, et al. ∙

which is the temporal part of the heat equation, and the ordinary differential equation

which is the temporal part of the wave equation. Note that μ

plays the role of an eigenvalue of the spatial operator, see

with the Hilbertian norms

are the Fourier coefficients of the series representation

With this notation, a related variational formulation to the parabolic-type problem (1) is to find u∈H1/20,(0,T) such that

Next, we state conforming discretizations of the variational formulations (4), (5). For this purpose, we define a partition TN={τℓ}Nℓ=1 of (0,T) for given N∈N, i.e.,

with elements τℓ:=(tℓ−1,tℓ)⊂R. The mesh sizes are hℓ:=tℓ−tℓ−1 for ℓ=1,…,N, and the maximal mesh size is h:=maxℓhℓ. On TN, with the distribution p=(p1,…,pN)∈NN of polynomial degrees, we introduce the space of piecewise polynomial, continuous functions on intervals

is the number of degrees of freedom and the functions

Thus, a conforming finite element method of the variational formulation (4) is to find uh∈Sp0,(TN) such that

The discrete variational formulation (9) is uniquely solvable, see [15, 18], and is equivalent to the linear system

Analogously, the conforming finite element method of the variational formulation (5) to find uh∈Sp0,(TN) such that

is uniquely solvable, see [9, 10], and is equivalent to the linear system

The rest of the paper is organized as follows: In Section 2, we recall well-known and prove new weakly singular integral representations of HT, which are the starting point of the calculation of the matrices MHT, AHT, BHT. In Section 3, Gauß quadratures are given, which are used in the following sections. Section 4 is the main part of this paper, where we state all quadrature schemes to calculate the matrices MHT, AHT, BHT to high accuracy. In Section 5, numerical examples show the quality of the new assembling method of MHT, AHT, BHT. In Section 6, we give some conclusions.

For v∈L2(0,T), the operator HT, as defined in (3), allows the integral representation

as a Cauchy principal value integral, where the kernel function is given as

For v∈H1(0,T), the operator HT, as defined in (3), allows the integral representation

as a weakly singular integral, where

the operator HT, as defined in (3), allows the integral representation

holds true as a weakly singular integral. Analogously, if f(b)=0, i.e., f∈H1,0(a,b), then we have the representation

as a weakly singular integral.

Let t∈(0,T) be arbitrary but fixed. We split the proof accordingly to the relation between t, a and b.

where the last integral exists as a weakly singular integral.

Third, the case t=a is investigated when f(a)=0. As in the cases before, the integral representation (17), the Hölder continuity of f and integration by parts lead to

where the last integral exists as a weakly singular integral.

) for each coordinate direction. More precisely, the tensor Gauß quadrature

In this section, we describe the assembling of the matrices MHT in (14), AHT in (15) and BHT in (16). The crucial point is the realization of the modified Hilbert transformation HT, where different possibilities exist, see [16, 19]

. In particular, for a uniform degree vector

p=(p,p,…,p) with a fixed, low polynomial degree p∈N, e.g., p=1 or p=2, the matrices MHT, AHT and BHT in (14), (15), (16), respectively, can be calculated using a series expansion based on the Legendre chi function, which converges very fast, independently of the mesh sizes, see [19, Subsection 2.2]. As for an hp-FEM, the degree vector p is not uniform or for high polynomial degrees, it is convenient to apply numerical quadrature rules to numerically approximate the matrix entries of MHT, AHT and BHT in (14), (15), (16), respectively. This is the main topic of the paper and is described in great detail in the following.

From the integral representation of HT in (18), we have

For the matrix BHT in (16), the integral representation of HT in (20) yields

for a sufficiently smooth function v:(0,T)→R. Thus, the entries of the matrix in (16) admit the representation

holds true, where α(m,ℓ)=i∈{1,2,…,M} is the global index related to the local index m for the interval τℓ and ψpℓm is a shape function. Possible choices of such shape functions are the classical Lagrange polynomials with equidistant nodes or Gauß–Lobatto nodes, see [2, Chapter 6], or Lobatto polynomials (integrated Legendre polynomials), see [13, Subsection 3.1.4].