Models based on approximation capabilities have recently been studied in the context of Optimal Recovery. These models, however, are not compatible with overparametrization, since model- and data-consistent functions could then be unbounded. This drawback motivates the introduction of refined approximability models featuring an added boundedness condition. Thus, two new models are proposed in this article: one where the boundedness applies to the target functions (first type) and one where the boundedness applies to the approximants (second type). For both types of model, optimal maps for the recovery of linear functionals are first described on an abstract level before their efficient constructions are addressed. By exploiting techniques from semidefinite programming, these constructions are explicitly carried out on a common example involving polynomial subspaces of C[-1,1]. 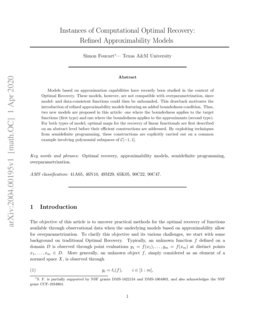 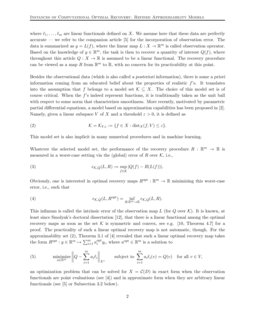 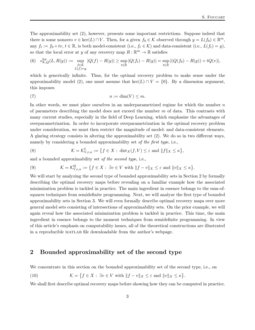 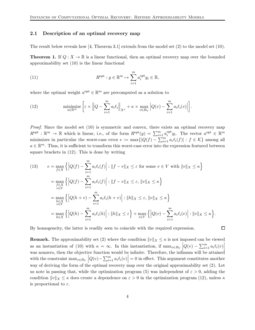 The objective of this article is to uncover practical methods for the optimal recovery of functions available through observational data when the underlying models based on approximability allow for overparametrization. To clarify this objective and its various challenges, we start with some background on traditional Optimal Recovery. Typically, an unknown function f defined on a domain D is observed through point evaluations y1=f(x1),…,ym=f(xm) at distinct points x1,…,xm∈D. More generally, an unknown object f, simply considered as an element of a normed space X, is observed through

where ℓ1,…,ℓm are linear functionals defined on X. We assume here that these data are perfectly accurate — we refer to the companion article [5] for the incorporation of observation error. The data is summarized as y=L(f), where the linear map L:X→Rm is called observation operator. Based on the knowledge of y∈Rm, the task is then to recover a quantity of interest Q(f), where throughout this article Q:X→R is assumed to be a linear functional. The recovery procedure can be viewed as a map R from Rm to R, with no concern for its practicability at this point.

Besides the observational data (which is also called a posteriori information), there is some a priori information coming from an educated belief about the properties of realistic f’s. It translates into the assumption that f belongs to a model set K⊆X. The choice of this model set is of course critical. When the f

’s indeed represent functions, it is traditionally taken as the unit ball with respect to some norm that characterizes smoothness. More recently, motivated by parametric partial differential equations, a model based on approximation capabilities has been proposed in

[2]. Namely, given a linear subspace V of X and a threshold ε>0, it is defined as

This model set is also implicit in many numerical procedures and in machine learning.

Whatever the selected model set, the performance of the recovery procedure R:Rm→R is measured in a worst-case setting via the (global) error of R over K, i.e.,

Obviously, one is interested in optimal recovery maps Ropt:Rm→R minimizing this worst-case error, i.e., such that

an optimization problem that can be solved for X=C(D) in exact form when the observation functionals are point evaluations (see [4]) and in approximate form when they are arbitrary linear functionals (see [5] or Subsection 3.2 below).

which is generically infinite. Thus, for the optimal recovery problem to make sense under the approximability model (2), one must assume that ker(L)∩V={0}. By a dimension argument, this imposes

In other words, we must place ourselves in an underparametrized regime for which the number n of parameters describing the model does not exceed the number m

of data. This contrasts with many current studies, especially in the field of Deep Learning, which emphasize the advantages of overparametrization. In order to incorporate overparametrization in the optimal recovery problem under consideration, we must then restrict the magnitude of model- and data-consistent elements. A glaring strategy consists in altering the approximability set (

2). We do so in two different ways, namely by considering a bounded approximability set of the first type, i.e.,

and a bounded approximability set of the second type, i.e.,

. We will even formally describe optimal recovery maps over more general model sets consisting of intersections of approximability sets. On the prior example, we will again reveal how the associated minimization problem is tackled in practice. This time, the main ingredient in essence belongs to the moment techniques from semidefinite programming. In view of this article’s emphasis on computability issues, all of the theoretical constructions are illustrated in a reproducible

We concentrate in this section on the bounded approximability set of the second type, i.e., on

We shall first describe optimal recovery maps before showing how they can be computed in practice.

2.1 Description of an optimal recovery map

Since the model set (10) is symmetric and convex, there exists an optimal recovery map Ropt:Rm→R which is linear, i.e., of the form Ropt(y)=∑mi=1aoptiyi

aopt∈Rm minimizes in particular the worst-case error e:=max{|Q(f)−∑mi=1aiℓi(f)|:f∈K} among all a∈Rm. Thus, it is sufficient to transform this worst-case error into the expression featured between square brackets in (12). This is done by writing

By homogeneity, the latter is readily seen to coincide with the required expression. ∎

The approximability set (2) where the condition ∥v∥X≤κ is not imposed can be viewed as an instantiation of (10) with κ=∞. In this instantiation, if maxv∈BV∣∣Q(v)−∑mi=1aiℓi(v)∣∣ was nonzero, then the objective function would be infinite. Therefore, the infimum will be attained with the constraint maxv∈BV∣∣Q(v)−∑mi=1aiℓi(v)∣∣=0 in effect. This argument constitutes another way of deriving the form of the optimal recovery map over the original approximability set (2). Let us note in passing that, while the optimization program (5) was independent of ε>0, adding the condition ∥v∥X≤κ does create a dependence on ε>0 in the optimization program (12), unless κ is proportional to ε.

In the presence of observation error e∈Rm in y=L(f)+e, modeled as in [5] by the bounded uncertainty set

For practical purposes, the result of Theorem 1 is close to useless if the minimization cannot be performed efficiently. We show below that in the important case X=C[−1,1], choosing V as the space Pn of algebraic polynomials of degree <n leads to an optimization problem which can be solved exactly via semidefinite programming. For that, we also assume that the observation functionals are distinct point evaluations and that the quantity of interest Q is another point evaluation or the normalized integral. These restrictions can be lifted if we trade exact solutions for quantifiably approximate solutions, see Subsection 3.2. In the statement below, the notation Toep(x) represents the symmetric Toeplitz matrix built from a vector x∈Rd, i.e.,

and the polynomials Tj, j∈[0:n−1], denote the jth Chebyshev polynomials of the first kind.

The work consists in recasting the objective function of (12) into manageable form. Under the assumptions on ℓ1,…,ℓm and on Q, the first term is not a problem, by virtue of

We now turn to the second term, i.e., the one involving the maximum over the unit ball BV of V. The idea, common in Robust Optimization [1], relies on duality to change the maximum into a minimum, which is then integrated into a larger minimization problem. This is possible essentially when BV admits a linear or semidefinite description, which is the case for V=Pn. Indeed, as already observed in [6, Subsection 5.3], following ideas formulated in [8], the unit ball of Pn admits the semidefinite description

has 1’s on the jth subdiagonal and superdiagonal and 0’s elsewhere — in particular D0 is the n×nidentity matrix. Thus, for a fixed a∈Rm, with Qa:=Q−∑mi=1aiℓi, the maximum over BV reads

Invoking duality in semidefinite programming (see e.g. [3, p.265-266]), the latter can be transformed into

We concentrate in this section on the bounded approximability set of the first type, i.e., on

Once again, we shall first describe optimal recovery maps before showing how they can be computed in practice.

3.1 Description of an optimal recovery map

As a matter of fact, Theorem 3 is a corollary of Theorem 4 below. The setting of the more general result involves subspaces V1,…,VK of a linear space X equipped with possibly distinct norms ∥⋅∥(1),…,∥⋅∥(K). The model set is then defined, for some parameters ε1,…,εK>0, by

It corresponds to what was called the multispace problem in [2, Section 3]. One works under the assumption that

We first notice that, replacing the norms ∥⋅∥(k) by ∥⋅∥(k)/εk, we can assume that εk=1. Next, since the model set K is symmetric and convex, there exists an optimal recovery map which is linear, i.e., of the form y∈Rm↦∑mi=1aiyi∈R. An optimal weight vector aopt∈Rm is then obtained as a solution to the optimization problem

In other words, we shall prove in two steps that the minimal values of (32) and (33) coincide.

Taking the infimum over λ1,…,λK and the supremum over f yields the desired result.

Introducing the subspace U of Z given by

The latter equals the norm of λ on U⊕(V1×⋯×VK), by virtue of ˜λ being a Hahn–Banach extension of λ, so that

It follows that, for any a∈Rm,

The approximability set (2) where the condition ∥f∥X≤κ is not imposed can be viewed as an instantiation of (25) with κ=∞. In this instantiation, if ∥ν∥X∗ was nonzero, then the objective function in (27) would be infinite. Therefore, the minimum will be attained with the constraint ∥ν∥X∗=0 in effect, leading to μ=Q−∑mi=1aiℓi and in turn to the constraint (Q−∑mi=1aiℓi)|V=0. We do retrieve the minimization of (5), as expected. We note in passing that, while the optimization program (5) was independent of ε>0, adding the condition ∥f∥X≤κ does create a dependence on ε>0 in the optimization problem (27), unless κ is proportional to ε.

In the presence of observation error e∈Rm in y=L(f)+e, again modeled as in [5] by the bounded uncertainty set

As before, the high-level results of Theorems 3 and 4 are of little practical use if the minimizations (27) and (31) cannot be performed efficiently. In the important situation X=C[−1,1], the dual functionals appearing as optimization variables are identified with measures. Despite involving infinite dimensional objects, minimizations over measures can be tackled via semidefinite programming, see e.g. [9]

. Although such minimizations are in general not solved exactly, their accuracy can be quantifiably estimated in our specific case. For ease of presentation, we illustrate the approach by concentrating on the optimization program (

27) rather than (31). We also assume that V=Pn and we write the observation functionals ℓ1,…,ℓm, as well as the quantity of interest Q, as

Let us introduce as slack variables the nonnegative Borel measures μ+, μ−, ν+, and ν− involved in the Jordan decompositions μ=μ+−μ− and ν=ν+−ν−, so that the problem (45) is recast as

Next, replacing the measures μ± and ν± by the infinite sequences of moments w±=M∞(μ±)∈RN and z±=M∞(ν±)∈RN of moments defined for k≥1 by

the problem (46) is equivalent222the equivalence is based on the discrete trigonometric moment problem, see [7] for details. to the infinite semidefinite program

Instead of solving this infinite optimization program, we truncate it to a level N≥n and solve instead the resulting finite semidefinite program