We consider an adaptive finite element method with arbitrary but fixed polynomial degree p > 1, where adaptivity is driven by an edge-based residual error estimator. Based on the modified maximum criterion from [Diening et al, Found. Comput. Math. 16, 2016], we propose a goal-oriented adaptive algorithm and prove that it is instance optimal. Numerical experiments underline our theoretical findings. 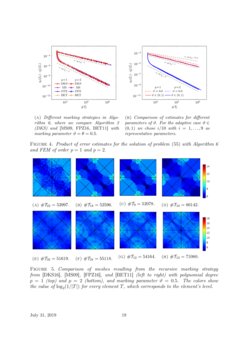 to successively adapt an initial mesh T0 to the possible singularities of the sought solution u. This leads to a sequence of meshes Tℓ and corresponding discrete solutions uℓ∈\SSp0(Tℓ)⊆H10(Ω) being Tℓ-piecewise polynomials of degree p≥1. In the last decades, the mathematical understanding of AFEM has matured. We refer to [Dör96, MNS00, BDD04, Ste07, CKNS08, FFP14] for some milestones of the analysis of convergence with optimal algebraic rates, to [MSV08, Sie11] for a general theory on (plain) convergence, and to [CFPP14] for an abstract approach for optimal convergence rates.

The works [Ste07, CKNS08, FFP14, CFPP14] aim for rate optimality of adaptive algorithms, i.e., they prove that the usual adaptive loop (1), based on (quasi-) minimal Dörfler marking [Dör96] for the step MARK, leads to optimal decay of the total error

being the sum of energy error |||u−uH||| plus data oscillation terms (or, equivalently, the error estimator, since ηH≃error(TH)). Let #(⋅) denote the number of elements of a finite set. Then, rate optimality reads as follows: For all s>0, it holds that

where ∥u∥As<∞ corresponds to certain approximation properties of u (which can be characterized in terms of Besov regularity [BDDP02, GM14, Gan17]).

Unlike this, the first work [BDD04] on AFEM with convergence rates implicitly proved even instance optimality of AFEM, i.e., the total error on an adaptive mesh is quasi-optimal with respect to all refinements of T0, which have essentially the same number of elements: It holds that

The key argument for the proof of (4) in [BDD04] is an additional coarsening step in the adaptive loop (1). While [BDD04] also employed the Dörfler marking criterion [Dör96] for the step MARK, the work [DKS16] proposed a modified maximum criterion to single out edges for refinement. For P1-AFEM for the 2D Poisson problem, [DKS16] then proved instance optimality (4) of their adaptive strategy without resorting to an additional coarsening step. In [KS16], their analysis was extended to AFEM with non-conforming P1 elements for the Poisson problem and the Stokes system in 2D. We stress that any instance-optimal AFEM (4) is, in particular, rate optimal (3).

While standard adaptivity aims to approximate the PDE solution u∈H10(Ω) by some discrete approximation uℓ∈\SSp0(Tℓ) in the energy norm, a goal-oriented adaptive finite element method (GOAFEM) aims only to approximate G(u) by G(uℓ), where G:H10(Ω)→R is the so-called goal functional or quantity of interest.

In the present paper, we consider the following problem: Let Ω⊂R2 be a polygonal Lipschitz domain, which is resolved by the initial mesh T0, where T0 is admissible in the sense of [BDD04, Ste08]. Given f,g∈L2(Ω) and f,g∈[L2(Ω)]2, the (linear) goal functional G∈H−1(Ω) reads

where u∈H10(Ω) is the unique solution to

Convergence and rate-optimality of GOAFEM has been addressed in [MS09, BET11, HPZ15, HP16, FGH+16, FPZ16]. The key idea of the argument is to let u∗∈H10(Ω) be the unique solution to the dual problem

Throughout, quantities associated with the dual problem are indexed by an asterisk. We note that the (symmetric) primal problem (6) and the dual problem (7) coincide up to the right-hand side. Let |||v|||:=∥A1/2∇v∥L2(Ω) be the problem-induced energy norm. For FEM approximations u≈uℓ∈\SSp0(Tℓ) and u∗≈u∗ℓ∈\SSp0(Tℓ), standard duality arguments (together with the Galerkin orthogonality) lead to

While [BET11, HPZ15, HP16] focus on linear convergence of GOAFEM, the works [MS09, FGH+16, FPZ16] also prove rate optimality. All works employ variants of the Dörfler marking criterion [Dör96]: The seminal work [MS09] employs (quasi-) minimal Dörfler marking separately for the primal and the dual problem, and then uses the smaller set for MARK. Instead, [BET11] proposes a (quasi-) minimal Dörfler marking for some combined estimator. Both strategies guarantee rate optimality for the product of the total errors

where the possible algebraic rate s+t now depends on the approximability properties of the primal and dual problem; see [MS09, FGH+16, FPZ16].

The new GOAFEM algorithm can briefly be outlined as follows: SOLVE computes the FEM solution uℓ∈\SSp0(Tℓ) to the primal problem (6) and u∗ℓ∈\SSp0(Tℓ) to the dual problem (7). ESTIMATE computes the corresponding residual error estimators ηℓ and η∗ℓ. MARK employs the modified maximum strategy from [DKS16] to obtain two sets of marked edges, namely ¯¯¯¯¯¯¯Mℓ with respect to ηℓ and ¯¯¯¯¯¯¯M∗ℓ with respect to η∗ℓ. With n:=min{#¯¯¯¯¯¯¯Mℓ,#¯¯¯¯¯¯¯M∗ℓ}, we then define Mℓ:=M–––ℓ∪M–––∗ℓ, where M–––ℓ⊆¯¯¯¯¯¯¯Mℓ and M–––∗ℓ⊆¯¯¯¯¯¯¯M∗ℓ are arbitrary up to #M–––ℓ=n=#M–––∗ℓ. Finally, REFINE employs 2D newest vertex bisection (NVB) to generate the coarsest mesh Tℓ+1, where all edges in Mℓ have been bisected once.

The main result of the present work states that the proposed GOAFEM is instance optimal (4) with respect to the total-error product, i.e.,

Again, we note that this implies, in particular, rate optimality (3). On a technical side, we note that the seminal work [DKS16] is restricted to the lowest-order FEM discretization p=1, while the present analysis also allows higher (but fixed) polynomial degrees p≥1. In this sense, the present work provides also the technical tools to generalize the instance-optimal AFEM of [DKS16] from p=1 to general but fixed p≥1.

The remainder of this paper is organized as follows: In Section 2, we give a precise formulation of the modules SOLVE, ESTIMATE, MARK, and REFINE of the adaptive loop (1). In particular, we state the modified maximum criterion (Algorithm 2.4) from [DKS16] as well as our extension to GOAFEM (Algorithm 2.4). Then, we thoroughly formulate our GOAFEM algorithm (Algorithm 2.6) and state our main result that the proposed GOAFEM is instance optimal (Theorem 2.6). Section 3 reviews the proof of the seminal work [DKS16] in an abstract framework. Section 4 collects the technical results to generalize the seminal work [DKS16] from lowest-order FEM p=1 to arbitrary polynomial degree p≥1 (Theorem 2.5). Thereafter, Section 5 gives the proof of Theorem 2.6. Some numerical experiments in Section 6 conclude this work and empirically compare the instance-optimal GOAFEM algorithm from the present work with the rate-optimal GOAFEM strategies from [MS09, BET11, FPZ16].

In all results, the involved constants (as well as their dependencies) are stated explicitly. In proofs, however, we write ≲ to abbreviate ≤ up to a multiplicative constant which is clear from the context. Moreover, we write ≃ if both estimates, ≲ and ≳, hold.

Before stating our main result, we discuss the particular modules of the adaptive loop (1) and fix the necessary notation.

For vertices z∈VH, we abbreviate TH(z):=TH({z})={T∈TH:z∈T}. For neighbors T,T′∈TH, we also consider the reduced edge patch

Similarly, we define the area associated to a set of triangles UH⊆TH by

For mesh-refinement, we employ an edge-based variant of newest vertex bisection (NVB) [Ste08]. We suppose that the initial mesh T0 is admissible in the sense of [BDD04, Ste08]: For all neighbors T,T′∈T0, the joint edge E=T∩T′∈E0 is the reference edge of T if and only if it is also the reference edge of T′. While this assumption is unnecessary for the NVB algorithm [KPP13], it provides additional structure which is crucial in the instance-optimality analysis of [DKS16].

For a mesh TH and a set MH⊆EH of marked edges, let Th:=refine(TH,MH) be the coarsest NVB refinement of TH such that all edges E∈MH have been bisected. Moreover, we write Th∈refine(TH), if Th can be obtained by finitely many steps of NVB refinement. Then, T:=refine(T0) is the set of all possible NVB refinements of T0. We note that NVB leads to uniformly shape-regular meshes in the sense of

where |T| is the area of a triangle T.

As usual, the primal problem (6) is understood in weak form. The Lax–Milgram lemma guarantees existence and uniqueness of u∈H10(Ω) such that

as well as the conforming FEM spaces

Again, the Lax–Milgram lemma proves the existence and uniqueness of uH∈\SSp0(TH) such that

The dual problem (7) is solved analogously with F(⋅) in (16) and (19) being replaced by G(⋅) from (5). The Lax–Milgram lemma guarantees existence and uniqueness of the dual solution u∗∈H10(Ω) and its FEM approximation u∗H∈\SSp0(TH).

For a posteriori error estimation, we employ an edge-based residual error estimator. Let |E| be the length of an edge E. For the primal problem (6) with F=f+divf∈H−1(Ω), we define

is a normal vector on

With this notation, we define

Note that for p=1 the volume term simply reads |T|∥f+divf∥2L2(T). The oscillations osc∗H(T) for the dual problem are defined analogously with g and g instead of f and f, respectively. We note that

where the hidden constant depends only on Cmesh from (15). For a subset UH⊆TH, we define oscH(UH) and osc∗H(UH) analogously to (22). We note that

where the reliability constant Crel>0 depends only on Cmesh from (15), while the efficiency constant Ceff>0 depends additionally on p.

Let TH∈T. We define the tail of an edge E∈EH by

i.e., the tail consists of all edges, which have to be refined to ensure conformity of the triangulation if E is bisected. Moreover, we define

With these definitions, we recall the following modified maximum criterion from [DKS16], which leads to an instance-optimal AFEM.

We refer to [DKS16] for a recursive implementation of Algorithm 2.4, which has linear costs. In case of GOAFEM, we need a different marking step that takes the primal as well as the dual problem into account. To this end, recall the Gauss brackets ⌊x⌋:=max{n∈Z:n≤x} for x∈R. We note that the following algorithm is slightly more general than the strategy outlined in Section 1.3 of the introduction (where Cmin=1).

The work [DKS16] analyzes the following instance of the adaptive loop (1), which turns out to be instance-optimal; see Theorem 2.5.

For p=1, the following theorem is the main result of [DKS16]. Our analysis below implies that the result remains true for arbitrary polynomial degrees p≥1.

Remark 5. We note that elementary calculation shows that, for all TH∈T∖{T0},

As outlined in the introduction, the main idea behind GOAFEM is the duality-based estimate

The formal statement of our GOAFEM algorithm reads as follows:

Remark 8. Note that the natural statement of instance-optimality for GOAFEM in the sense of (4) and (9) would be: ∃C>1∀ℓ∈N0∀TH∈refine(T0) such that

Our Theorem 2.6, however, is stronger. There, the mesh for the right-hand side can be chosen for both factors independently.

Note that TH,Th∈T exist (and are unique), since newest vertex bisection is a a binary refinement rule, where the order of refinements does not matter. This allows to write

Moreover, according to [DKS16], this also implies that

Only energies that are compatible with this structure are suitable to prove instance optimality. This is encoded in the following properties 1–5, where Cmark, Cdiam, Cest, Cerr>0 are generic constants, ηh is a computable edge-based estimator, and mark is an abstract marking strategy: