It this paper we revisit the fast stylization method introduced in Ulyanov et. al. (2016). We show how a small change in the stylization architecture results in a significant qualitative improvement in the generated images. The change is limited to swapping batch normalization with instance normalization, and to apply the latter both at training and testing times. The resulting method can be used to train high-performance architectures for real-time image generation. The code will is made available on github at https://github.com/DmitryUlyanov/texture_nets. Full paper can be found at arXiv:1701.02096. 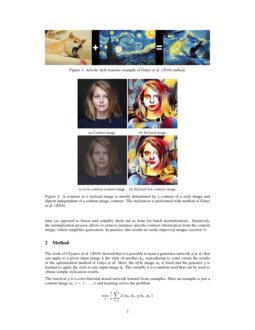 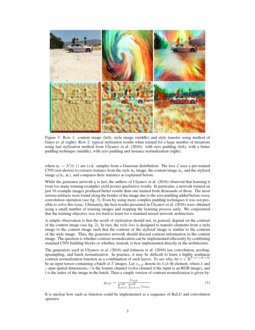 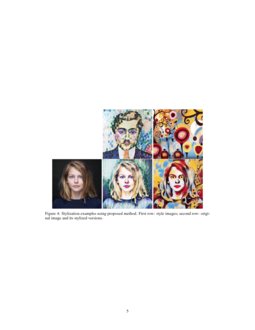 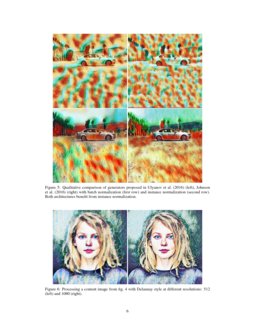 In this paper, we explore the role of Instance Normalization in low-leve...
Liangyu Chen, et al. ∙

Collaging on Internal Representations: An Intuitive Approach for Semantic Transfiguration

Although the method of Gatys et. al produces remarkably good results, it is computationally inefficient. The stylized image is, in fact, obtained by iterative optimization until it matches the desired statistics. In practice, it takes several minutes to stylize an image of size 512×512. Two recent works, Ulyanov et al. (2016) Johnson et al. (2016), sought to address this problem by learning equivalent feed-forward generator networks that can generate the stylized image in a single pass. These two methods differ mainly by the details of the generator architecture and produce results of a comparable quality; however, neither achieved as good results as the slower optimization-based method of Gatys et. al.

In this paper we revisit the method for feed-forward stylization of Ulyanov et al. (2016) and show that a small change in a generator architecture leads to much improved results. The results are in fact of comparable quality as the slow optimization method of Gatys et al. but can be obtained in real time on standard GPU hardware. The key idea (section 2) is to replace batch normalization layers in the generator architecture with instance normalization layers, and to keep them at test time (as opposed to freeze and simplify them out as done for batch normalization). Intuitively, the normalization process allows to remove instance-specific contrast information from the content image, which simplifies generation. In practice, this results in vastly improved images (section 3).

The work of Ulyanov et al. (2016) showed that it is possible to learn a generator network g(x,z) that can apply to a given input image x the style of another x0, reproducing to some extent the results of the optimization method of Gatys et al. Here, the style image x0 is fixed and the generator g is learned to apply the style to any input image x. The variable z is a random seed that can be used to obtain sample stylization results.

is a convolutional neural network learned from examples. Here an example is just a content image

xt,t=1,…,n and learning solves the problem

are i.i.d. samples from a Gaussian distribution. The loss

L uses a pre-trained CNN (not shown) to extracts features from the style x0 image, the content image xt, and the stylized image g(xt,zt), and compares their statistics as explained before.

While the generator network g is fast, the authors of Ulyanov et al. (2016) observed that learning it from too many training examples yield poorer qualitative results. In particular, a network trained on just 16 example images produced better results than one trained from thousands of those. The most serious artifacts were found along the border of the image due to the zero padding added before every convolution operation (see fig. 3). Even by using more complex padding techniques it was not possible to solve this issue. Ultimately, the best results presented in Ulyanov et al. (2016) were obtained using a small number of training images and stopping the learning process early. We conjectured that the training objective was too hard to learn for a standard neural network architecture.

The generators used in Ulyanov et al. (2016) and Johnson et al. (2016) use convolution, pooling, upsampling, and batch normalization. In practice, it may be difficult to learn a highly nonlinear contrast normalization function as a combination of such layers. To see why, let x∈RT×C×W×H

be an input tensor containing a batch of

T images. Let xtijk denote its tijk-th element, where k and j span spatial dimensions, i is the feature channel (color channel if the input is an RGB image), and t is the index of the image in the batch. Then a simple version of contrast normalization is given by:

It is unclear how such as function could be implemented as a sequence of ReLU and convolution operator.

In this section, we evaluate the effect of the modification proposed in section 2 and replace batch normalization with instance normalization. We tested both generator architectures described in Ulyanov et al. (2016) and Johnson et al. (2016) in order too see whether the modification applies to different architectures. While we did not have access to the original network by Johnson et al. (2016), we carefully reproduced their model from the description in the paper. Ultimately, we found that both generator networks have similar performance and shortcomings (fig. 5 first row).

fig. 5 second row). The quality of both generators is similar, but we found the residuals architecture of Johnson et al. (2016) to be somewhat more efficient and easy to use, so we adopted it for the results shown in fig. 4.

In this short note, we demonstrate that by replacing batch normalization with instance normalization it is possible to dramatically improve the performance of certain deep neural networks for image generation. The result is suggestive, and we are currently experimenting with similar ideas for image discrimination tasks as well.