End-to-end (E2E) models have gained attention in the research field of automatic speech recognition (ASR). Many E2E models proposed so far assume left-to-right autoregressive generation of an output token sequence except for connectionist temporal classification (CTC) and its variants. However, left-to-right decoding cannot consider the future output context, and it is not always optimal for ASR. One of the non-left-to-right models is known as non-autoregressive Transformer (NAT) and has been intensively investigated in the area of neural machine translation (NMT) research. One NAT model, mask-predict, has been applied to ASR but the model needs some heuristics or additional component to estimate the length of the output token sequence. This paper proposes to apply another type of NAT called insertion-based models, that were originally proposed for NMT, to ASR tasks. Insertion-based models solve the above mask-predict issues and can generate an arbitrary generation order of an output sequence. In addition, we introduce a new formulation of joint training of the insertion-based models and CTC. This formulation reinforces CTC by making it dependent on insertion-based token generation in a non-autoregressive manner. We conducted experiments on three public benchmarks and achieved competitive performance to strong autoregressive Transformer with a similar decoding condition. 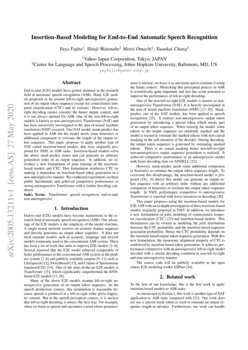 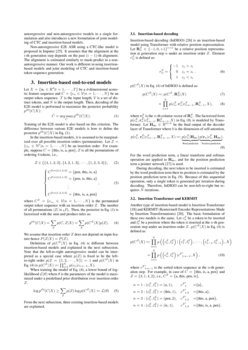 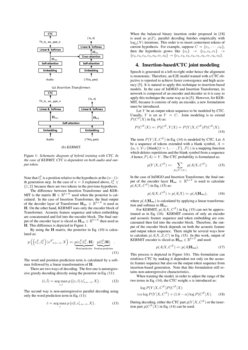 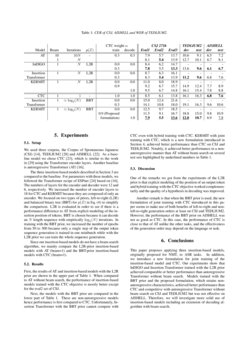 End-to-end (E2E) models have become mainstream in the research field of automatic speech recognition (ASR). One advantage of the E2E models is the simplicity of the model structure. A single neural network receives an acoustic feature sequence and directly generates an output token sequence. It does not need separate models such as acoustic, language and lexicon models commonly used in the conventional ASR system. There has been a lot of work that aims to improve E2E models

Many of the above E2E models assume left-to-right autoregressive generation of an output token sequence. In the speech production context, this assumption is reasonable because speech is produced in a left-to-right order given linguistic content. But in the speech perception context, it is unclear that left-to-right decoding is always the best way. For example, when we listen to speech and encounter a word whose pronunciation is unclear, we leave it as uncertain and re-estimate it using the future context. Mimicking this perceptual process in ASR is scientifically quite important and also has some potential to improve the performance of left-to-right decoding.

One of the non-left-to-right E2E models is known as non-autoregressive Transformer (NAT). It is heavily investigated in the area of neural machine translation (NMT) [11, 24, 13, 4]. Mask-predict, one of the NAT models, has been applied to speech recognition [6]

. It realizes non-autoregressive output token generation by introducing a special token which masks part of an output token sequence. When training the model, some tokens in the output sequence are randomly masked and the model is trained to estimate the masked tokens with non-causal masking in the self-attention of the decoder. During decoding, the output token sequence is generated by estimating masked tokens. There is no causal masking hence non-left-to-right non-autoregressive output sequence generation is realized. It achieved competitive performance to an autoregressive model with faster decoding time on AISHELL

To the best of our knowledge, this is the first work to apply insertion-based models to ASR tasks.

As mentioned in Section 1, this work is another type of NAT application to ASR tasks compared with [6]. Our work does not use a special mask token or need to estimate an output sequence length in advance. Furthermore, our work can handle autoregressive and non-autoregressive models in a single formulation and also introduces a new formulation of joint modeling of CTC and insertion-based models.

[5]. It assumes that the alignment at the i-th generation step depends on the past (i−1)-th alignment. The alignment is estimated similarly to mask-predict in a non-autoregressive manner. Our work is different in using insertion-based models and joint modeling of CTC and insertion-based token sequence generation.

Let X={xt∈Rd|t=1,⋯,T} be a d-dimensional acoustic feature sequence and C={cn∈V|n=1,⋯,N} be an output token sequence. T is the input length, V is a set of distinct tokens, and N

is the output length. Then, decoding of the E2E model is performed to maximize the posterior probability

Training of the E2E model is also based on this criterion. The difference between various E2E models is how to define the posterior pe2e(C|X) in Eq. (1).

In the insertion-based models, it is assumed to be marginalized over all possible insertion orders (permutation). Let Z={zn∈N1|n=1,⋯,N} be an insertion order. For example, suppose C={this, is, a, pen}, Z is all the permutations of ordering 4 tokens, i.e.,

where CZ={czn∈V|n=1,⋯,N} is the permutated output token sequence with an insertion order Z. The number of all permutations |Z| is 4P4. Then, the posterior in Eq. (1) is factorized with the sum and product rules as:

We assume that insertion order Z does not depend on input feature hence P(Z|X)=P(Z).

When training the model of Eq. (4), a lower bound of log-likelihood L(θ) where θ is the parameters of the model is maximized under a predefined prior distribution over insertion order Z.

From the next subsection, three existing insertion-based models are explained.

where rZn is the n

RZn. The factorized form p(cZn,rZn|cZ1:n−1,RZ1:n−1,X) in Eq. (8) is modeled by Transformer. Let Hdec∈Rb×N be the final output of the decoder layer of Transformer where b is the dimension of self-attention,

For the word prediction term, a linear transform and softmax operation are applied to

Hdec, and for the position prediction term a pointer network [26] is used.

Another type of insertion-based model is Insertion Transformer [24] and KERMIT (Kontextuell Encoder Representations Made by Insertion Transformations) [4]. The basic formulation of these two models is the same. Let cZn be a token to be inserted and lZn be a position where the token is inserted at the n-th generation step under an insertion order Z. p(CZ|X) in Eq. (4) is defined as:

Note that lZn is a position relative to the hypothesis at the (n−1)-th generation step. In the case of n=3 explained above, lZn∈{1,2} because there are two tokens in the previous hypothesis.

By using the H matrix, the posterior in Eq. (10) is calculated as:

The word and position prediction term is calculated by a softmax followed by a linear transformation of H.

There are two ways of decoding. The first one is autoregressive greedy decoding directly using the posterior in Eq. (11):

The second way is non-autoregressive parallel decoding using only the word prediction term in Eq. (11):

Speech is generated in a left-to-right order hence the alignment is monotonic. Therefore, an E2E model trained with a CTC objective is reported to achieve faster convergence and high accuracy [27]. It is natural to apply this technique to insertion-based models. In the case of InDIGO and Insertion Transformer, its network is composed of an encoder and decoder so it is easy to apply this technique the same way as in [27]. However, for KERMIT, because it consists of only an encoder, a new formulation must be introduced.

Let Y be an output token sequence to be modeled by CTC. Usually, Y is set as Y=C. Joint modeling is to extend P(CZ|X) in Eq. (4) as:

The term P(Y|X,CZ) in Eq. (14) is modeled by CTC. Let A be a sequence of tokens extended with a blank symbol, A={at∈V∪{blank}|t=1,⋯,T}. F(⋅) is a mapping function which deletes repetitions and the blank symbol from a sequence A hence F(A)=Y. The CTC probability is formulated as:

In the case of InDIGO and Insertion Transformer, the final output of the encoder layer Henc∈Rb×T is used to calculate p(A|X,CZ) in Eq. (15) as:

where p(A|Henc) is calculated by applying a linear transformation and softmax to Henc.

For KERMIT, p(A|X,CZ) in Eq. (15) can not be approximated as in Eq. (16). KERMIT consists of only an encoder and acoustic feature sequence and token embedding are concatenated then fed into the encoder block. Therefore, the output of the encoder block depends on both the acoustic feature and output token sequence. There might be several ways how to calculate p(A|X,Z,C) in Eq. (15). In this work, output of KERMIT encoder is sliced as Hfeat∈Rb×T and used:

This process is depicted in Figure 1. This formulation can reinforce CTC by making it dependent not only on the acoustic feature sequence but also on the output token sequence from insertion-based generation. Note that this formulation still retains non-autoregressive characteristics.

When training the model, in order to adjust the range of the two terms in Eq. (14), the CTC weight α is introduced as:

We used three corpora, the Corpus of Spontaneous Japanese (CSJ) [17], TEDLIUM2 [21] and AISHELL[2]. As a baseline model we chose CTC [10], which is similar to the work in [23] using the Transformer encoder layers. Another baseline is autoregressive Transformer (AT) [15].

The three insertion-based models described in Section 3 are compared to the baseline. For parameters with these models, we followed the Transformer recipe of ESPnet [28] based on [15]. The numbers of layers for the encoder and decoder were 12 and 6, respectively. We increased the number of encoder layers to 18 for CTC and KERMIT because they are composed of only an encoder. We focused on two types of priors, left-to-right (L2R) and balanced binary tree (BBT) for p(Z) in Eq. (4) to simplify the comparison. L2R is evaluated in order to see if there is a performance difference to AT from explicit modeling of the insertion position of tokens. BBT is chosen because it can decode an N length sequence with empirically log2(N)

iterations. In training with the BBT prior, we increased the number of epochs from 50 to 300 because only a single step of the output token sequence generation is trained in one minibatch while with the L2R prior we can train the whole sequence generation.

Next, the models with the BBT prior are compared in the lower part of Table 1. These are non-autoregressive models hence performance is first compared to CTC. Unfortunately, Insertion Transformer with the BBT prior cannot compete with CTC even with hybrid training with CTC. KERMIT with joint training with CTC, which is a new formulation introduced in Section 4, achieved better performance than CTC on CSJ and TEDLIUM2. Notably, it achieved better performance in a non-autoregressive manner than AT without beam search on several test sets highlighted by underlined numbers in Table 1.

One of the remarks we got from the experiments of the L2R prior is that explicit modeling of the position of an output token and hybrid training with the CTC objective worked complementarily and the quality of a hypothesis in decoding was improved.

Another remark is that when the BBT prior is used, the new formulation of joint training with CTC introduced in this paper seems to make use of both benefits of left-to-right and non-left-to-right generation orders at least on CSJ and TEDLIUM2. However, the performance of the BBT prior on AISHELL was not as good as CTC. In this case, the performance of CTC is close to that of AT unlike the other tasks, and the effectiveness of the generation order may depend on the language or task.

This paper proposes applying three insertion-based models, originally proposed for NMT, to ASR tasks. In addition, we introduce a new formulation for joint training of the insertion-based model and CTC. Our experiments show that InDIGO and Insertion Transformer trained with the L2R prior achieved comparable or better performance than autoregressive Transformer without beam search. Models trained with the BBT prior and the proposed formulation, which retains non-autoregressive characteristics, achieved better performance than CTC and competitive with autoregressive Transformer without beam search on CSJ and TEDLIUM2 but was not effective on AISHELL. Therefore, we will investigate more solid use of insertion-based models including an extension of decoding algorithm with beam search.