Blockchain systems have gained substantial traction recently, partly due to the potential of decentralized immutable mediation of economic activities. Ethereum is a prominent example that has the provision for executing stateful computing scripts known as Smart Contracts. These smart contracts resemble traditional programs, but with immutability being the core differentiating factor. Given their immutability and potential high monetary value, it becomes imperative to develop high-quality smart contracts. Software metrics have traditionally been an essential tool in determining programming quality. Given the similarity between smart contracts (written in Solidity for Ethereum) and object-oriented (OO) programming, OO metrics would appear applicable. In this paper, we empirically evaluate inheritance-based metrics as applied to smart contracts. We adopt this focus because, traditionally, inheritance has been linked to a more complex codebase which we posit is not the case with Solidity based smart contracts. In this work, we evaluate the hypothesis that, due to the differences in the context of smart contracts and OO programs, it may not be appropriate to use the same interpretation of inheritance based metrics for assessment. 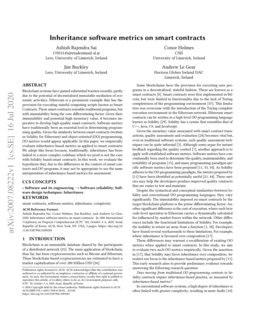 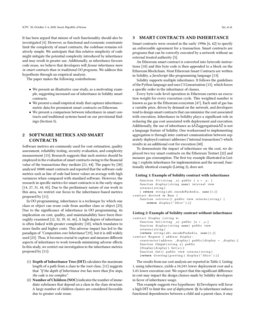 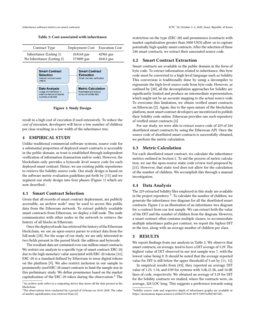 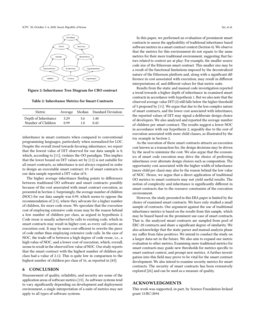 An Empirical Study of Protocols in Smart Contracts

Smart contracts are programs that are executed on a blockhain. They have...
Timothy Mou, et al. ∙

What are the Actual Flaws in Important Smart Contracts (and How Can We Find Them)?

Ransomware as a Service using Smart Contracts and IPFS

Blokchain is used in a variety of applications where trustworthy computi...
Asif Bhat, et al. ∙

Some blockchains have the provision for executing user programs in a decentralized, stateful fashion. These are known as a smart contracts (buterin2014next). Smart contracts were first implemented in Bitcoin, but were limited in functionality due to the lack of Turing completeness of the programming environment (salter2016bitcoin). This limitation was overcome with the introduction of the Turing complete execution environment in the Ethereum network. Ethereum smart contracts can be written in a high-level OO programming language known as Solidity (parizi2018smart). Solidity has a syntax that resembles that of C++, Java, C#, and JavaScript.

Given the monetary value associated with smart contract transactions, quality assessment and evaluation (kelly2006context) becomes vital but, even in traditional software systems, such quality assessment techniques can be quite informal (ali2018architecture). Although some argue for instant feedback regarding the quality control (buckley2013jittac), another approach is to apply well-established software metrics. Software metrics have conventionally been used to determine the quality, maintainability, and testability of programs (fenton2014software), and many programming-paradigm specific software metrics have been proposed (chidamber1994metrics; ryder2005software; ryder2004software). As Solidity adheres to the OO programming paradigm, the metrics proposed by (chidamber1994metrics) have been identified as potentially useful (tonelli2018smart; hegedus2019towards). These metrics may help the developers produce improved quality contracts that are easier to test and maintain.

Despite the syntactical and conceptual similarities between Solidity and conventional OO programming languages, they vary significantly. The immutability imposed on smart contracts by the target blockchain platform is the prime differentiating factor. Another significant difference is the cost of execution, where each byte code-level operation in Ethereum carries a dynamically calculated fee influenced by market forces within the network. Other differences include the functional limitations of Solidity. For example, the inability to return an array from a function (SolidityDocumentation; sergey2017concurrent). Developers have found several workarounds to these limitations. For example, where inheritance is favoured over composition (stover).

These differences may warrant a recalibration of existing OO metrics when applied to smart contracts. In this study, we aim to evaluate two such OO metrics empirically. Given the assertion in (stover), that Solidity may favor inheritance over composition, we restrict our focus to the inheritance-based metrics proposed by (chidamber1994metrics). This early research aims to provide preliminary evidence towards answering the following research question:

In conventional software systems, a high degree of inheritance is often linked with greater complexity, resulting in more faults (cartwright1998empirical). It has been argued that misuse of such functionality should also be investigated (amann2018systematic). However, as functional and economic constraints limit the complexity of smart contracts, the codebase remains relatively simple. We anticipate that this relative simplicity of code might mitigate the potential complexity introduced by inheritance and may result in greater use. Additionally, as inheritance favours code reuse, we believe that developers will favour inheritance more in smart contracts than in traditional OO programs. We address this hypothesis through an empirical analysis.

The paper makes the following contributions:

Software metrics are commonly used for cost estimation, quality assessment, reliability testing, security evaluation, and complexity measurement (fenton2014software). Research suggests that such metrics should be employed in the evaluation of smart contracts owing to the financial value of the transactions they mediate (tonelli2018smart; hegedus2019towards). The paper by (pinna2019massive)

analyzed 10000 smart contracts and reported that the software code metrics such as line of code had lower values on average with high variances when compared with standard software. However, the research in specific metrics for smart contracts is in the early stages

(porru2017blockchain; destefanis2018smart; tonelli2018smart; ghassemi2018reverse; 8327564). Due to the preliminary nature of our work in this area, we restrict our focus to the inheritance-based metrics proposed by (chidamber1994metrics).

In OO programming, inheritance is a technique by which one class or object can reuse code from another class or object (johnson1988designing). Due to the significance of inheritance in OO programming, its implication on cost, quality, and maintainability have been thoroughly examined (subramanyam2003empirical; daly1996evaluating; prechelt2003controlled; unger1998impact; singh2011investigation). A high degree of inheritance is often linked with greater complexity (cartwright1998empirical), which translates to more faults and higher costs. This adverse impact has led to the paradigm of ”Composition over Inheritance”(gamma1995design), but it is still widely used (knoernschild2002java). Thus, it becomes crucial to capture and measure different aspects of inheritance to work towards minimizing adverse effects. In this study, we restrict our investigation to the inheritance metrics proposed by (chidamber1994metrics):

Smart contracts were created in the early 1990s (bonneau2015sok; szabo1997idea) to specify an enforceable agreement for a transaction. Smart contracts are programs that can be correctly executed by a network without an external trusted authority (bartoletti2017empirical).

An Ethereum smart contract is converted into bytecode instructions (frantz2016institutions) and this byte code is then appended to a block on the Ethereum Blockchain. Most Ethereum Smart Contracts are written in Solidity, a JavaScript-like programming language (dannen2017introducing).

Solidity supports multiple inheritance. It follows the guidelines of the Python language and uses C3 Linearization (dannen2017introducing), which forces a specific order in the inheritance of classes.

Every byte code level operation in Ethereum carries an execution weight for every execution cycle. This weighted number is known as gas in the Ethereum ecosystem (wood2014ethereum). Each unit of gas has a variable price, driven by demand on the network, and developers tend to design smart contracts that can minimize the cost associated with execution. Inheritance in Solidity plays a significant role in reducing the gas cost associated with deployment and execution. Additionally, the use of inheritance as ’aggregation’ is not a language feature of Solidity. One workaround to implementing aggregation is through inter contract communication between separately deployed contract addresses (”internal transactions”) which results in an additional cost for execution (stack).

To demonstrate the impact of inheritance on the cost, we deployed two toy smart contracts on the Ethereum Testnet (iyer2018ethereum) and measure gas consumption. The first toy example illustrated in Listing 1 exploits inheritance for implementation and the second, functionally identical example (Listing LABEL:fig:code2), does not.