Inheritance of strong mixing and weak dependence under renewal sampling 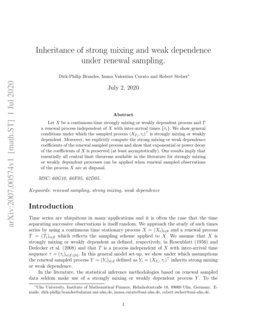 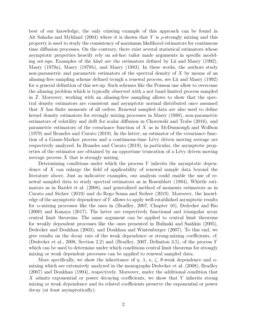 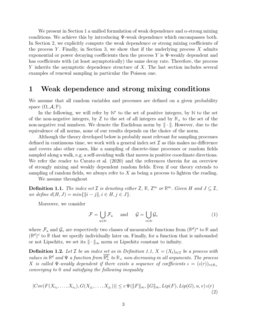 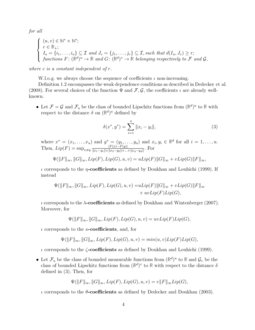 Time series are ubiquitous in many applications and it is often the case that the time separating successive observations is itself random. We approach the study of such times series by using a continuous time stationary process X=(Xt)t∈R and a renewal process T=(Ti)i∈Z which reflects the sampling scheme applied to X. We assume that X is strongly mixing or weakly dependent as defined, respectively, in R56 and DD08 and that T is a process independent of X with inter-arrival time sequence τ=(τi)i∈Z∖{0}. In this general model set-up, we show under which assumptions the renewal sampled process Y=(Yi)i∈Z defined as Yi=(XTi,τi)⊤ inherits strong mixing or weak dependence.

In the literature, the statistical inference methodologies based on renewal sampled data seldom make use of a strongly mixing or weakly dependent process Y. To the best of our knowledge, the only existing example of this approach can be found in ASM04 where it is shown that Y is ρ

-strongly mixing and this property is used to study the consistency of maximum likelihood estimators for continuous time diffusion processes. On the contrary, there exist several statistical estimators whose asymptotic properties heavily rely on ad-hoc tailor made arguments in specific modeling set-ups. Examples of the kind are the estimators defined by

LM92, M78a, M78b, and M83. In these works, the authors study non-parametric and parametric estimators of the spectral density of X by means of an aliasing-free sampling scheme defined trough a renewal process, see LM92 for a general definition of this set-up. Such schemes like the Poisson one allow to overcome the aliasing problem which is typically observed with a not band limited process sampled in Z

. Moreover, working with an aliasing-free sampling allows to show that the spectral density estimators are consistent and asymptotic normal distributed once assumed that

has finite moments of all orders. Renewal sampled data are also used to define kernel density estimators for strongly mixing processes in

M88, non-parametric estimators of volatility and drift for scalar diffusion in CT16, and parametric estimators of the covariance function of X as in MW79 and BC18. In the latter, an estimator of the covariance function of a Gauss-Markov process and a continuous-time Lévy driven moving average are respectively analyzed. In BC18, in particular, the asymptotic properties of the estimator are obtained by an opportune truncation of a Lévy driven moving average process X that is strongly mixing.

Determining conditions under which the process Y inherits the asymptotic dependence of X can enlarge the field of applicability of renewal sample data beyond the literature above. Just as indicative examples, our analysis could enable the use of renewal sampled data to study spectral estimators as in R84, Whittle estimators as in BD08, and generalized method of moments estimators as in CS19 and SS19. Moreover, the knowledge of the asymptotic dependence of Y allows to apply well-established asymptotic results for α-mixing processes like the ones in (B07, Chapter 10), DR00 and K17. The latter are respectively functional and triangular array central limit theorems. The same argument can be applied to central limit theorems for weakly dependent processes like the ones presented in BS05, DD03, and DW07. To this end, we give results on the decay rate of the weak dependence or strong-mixing coefficients, cf. (DD08, Section 2.2) and (B07, Definiton 3.5), of the process Y which can be used to determine under which conditions central limit theorems for strongly mixing or weak dependent processes can be applied to renewal sampled data.

More specifically, we show the inheritance of η, λ, κ, ζ, θ-weak dependence and α-mixing which are extensively analyzed in the monographs DD08, B07 and D94, respectively. Moreover, under the additional condition that X admits exponential or power decaying coefficients, we show that Y inherits strong mixing or weak dependence and its related coefficients preserve the exponential or power decay (at least asymptotically).

Although the theory developed below is probably most relevant for sampling processes defined in continuous time, we work with a general index set I as this makes no difference and covers also other cases, like a sampling of discrete-time processes or random fields sampled along a walk, e.g. a self-avoiding walk that moves in positive coordinate directions. We refer the reader to CSS20 and the references therein for an overview of strongly mixing and weakly dependent random fields. Even if our theory extends to sampling of random fields, we always refer to X as being a process to lighten the reading.

where Fu and Gv are respectively two classes of measurable functions from (Rd)u to R and (Rd)v to R that we specify individually later on. Finally, for a function that is unbounded or not Lipschitz, we set its ∥⋅∥∞ norm or Lipschitz constant to infinity.

Let I be an index set as in Definition 1.1, X=(Xt)t∈I be a process with values in Rd and Ψ a function from ¯¯¯¯¯¯¯R6+ to R+ non-decreasing in all arguments. The process X is called Ψ-weakly dependent if there exists a sequence of coefficients ι=(ι(r))r∈R+ converging to 0 and satisfying the following inequality

where c is a constant independent of r.

W.l.o.g. we always choose the sequence of coefficients ι non-increasing.

Definition 1.2 encompasses the weak dependence conditions as described in DD08. For several choices of the function Ψ and F,G, the coefficients ι are already well-known.

The weak dependence conditions can all be alternatively formulated by further assuming that F∈F and G∈G are bounded by one. For more details on this issue see DL99 and DD03. Therefore, an alternative definition of Ψ-weak dependence exists where the function Ψ in Definition (2) does not depend on ∥F∥∞ and ∥G∥∞. In this case, ∥F∥∞ and ∥G∥∞ are always bounded by one and therefore omitted in the notation.

Let I a set as in Definition 1.1, then a process X=(Xt)t∈I with values in Rd is said to be α-mixing if

Let I be a set as in Definition 1.1 and X=(Xt)t∈I be a process with values in Rd and F=G where Fu is the class of bounded measurable functions from (Rd)u to R. X is α-mixing if and only if there exists a sequence (ι(r))r∈R+ converging to 0 such that

and where c is a constant independent of r.

Definition (4) immediately implies that the right hand side of the inequality above is smaller than or equal to 4α(r)∥F∥∞∥G∥∞. Hence, if X is α-mixing then (5) holds with ι(r)=α(r) and c=4.

We assume now that the sequence X is Ψ-weakly dependent with Ψ given by (6). By Theorem 4.4(a) and Remark 3.17(ii) in B07, we can rewrite the definition of the α-coefficients as

We assume given a strictly stationary Rd-valued process X, i.e. for all n∈N and all t1,…,tn∈I it holds

We want to investigate the asymptotic dependence of X sampled at a renewal sequence. We first need the following definitions.

The sequence (Ti)i∈Z is called a renewal sampling sequence. When I⊂R, we call τ the sequence of the inter-arrival times.

We call X the underlying process and Y the renewal sampled process.

Definition 2.1 comes from H74 and determines the sampling of a random field through self-avoiding paths that move in positive coordinate directions. However, there are other interesting walks in Rm that we could investigate by dropping the non-negativity of the sequence τ and using, for example, the definition of a renewal sequence as given in S69. This latter definition is also compatible with sampling a random field along a walk that moves in lexicographically increasing directions. The study of the asymptotic dependence of such samples is beyond the scope of the present paper but constitutes an interesting future research direction.

In the following theorem, we work with the class of functions defined in (1) and

where ~Fu and ~Gv are respectively two classes of measurable functions from (Rd+1)u to R and (Rd+1)v to R which can be either bounded or bounded Lipschitz.

Let Y=(Yi)i∈Z be a renewal sampled process with the underlying process X being strictly stationary and Ψ-weakly dependent with coefficients ι. Then, there exists a sequence I such that

where C is a constant independent of n. Moreover,

where μ∗0 is the Dirac delta measure in zero, and, μ∗n is the n-fold convolution of μ for n≥1.

Let us first discuss the summand (13). The term

and, by stationarity of the process X and the i.i.d property of (τi)i∈Z∖{0}, it is equal to

The summand (12) is less than or equal to

indicates the joint distribution of the inter-arrival times sequence

We have that j1−iu≥n and that w.l.o.g. the coefficients ι are non increasing. Thus, we can conclude that the above integral is less than or equal to

Note that, if the coefficients (11) converge to zero as n goes to infinity then Y inherits the asymptotic dependence structure of X.

In this section, we consider renewal sampling of X=(Xt)t∈R. Therefore, the inter-arrival times are a sequence of non-negative i.i.d random variables with values in R.

In fact, central limit theorems for a Ψ-weakly dependent process X typically hold under sufficient conditions of the following type: E[∥X0∥δ]<∞ for some δ>0 and the coefficients ι satisfy a condition

In terms of the Laplace transform of the inter-arrival times, we can obtain a general formula for the coefficients (I(n))n∈N.

Then, the process Y admits coefficients

which converge to zero as n goes to infinity.

Using the result obtained in Theorem 2.4, we have that

To summarize, if X is η, λ, κ, ζ, θ-weakly dependent or α-mixing then Y inherits the same kind of asymptotic dependence structure under renewal sampling as long as the η, λ, κ, θ, ζ or α-coefficients of X are exponentially decaying.

If we have a renewal sampling with Γ(α,β)-distributed inter-arrival times for α,β>0, then μ∗n is the distribution function of a Γ(nα,β) distributed random variable. By Proposition 3.1, we obtain the coefficients

A special case of the coefficients above is obtained in the case of Poisson sampling, i.e. μ=Exp(λ) with λ>0. In this instance, μ∗n is the distribution function of a Γ(n,λ) distributed random variable. We then obtain the coefficients

We now assume that the underlying process X is Ψ-weakly dependent with coefficients ι(r)≤Cr−γ for γ>0.

We start with some concrete examples of inter-arrival time distributions μ which preserve the power decay of the coefficients ι.

by using Stirling’s series, see TE51, for n to infinity.

In the special case of Poisson sampling, μ∗n is a Γ(n,λ) distribution and

We consider now the case where μ

is an inverse Gaussian distribution with mean

m and shape parameter λ (short IG(m,λ)). We have that μ∗n is a IG(nm,n2λ) distribution and