We introduce a new algorithm for regularized reconstruction of multispectral (MS) images from noisy linear measurements. Unlike traditional approaches, the proposed algorithm regularizes the recovery problem by using a prior specified only through a learned denoising function. More specifically, we propose a new accelerated gradient method (AGM) variant of regularization by denoising (RED) for model-based MS image reconstruction. The key ingredient of our approach is the three-dimensional (3D) deep neural net (DNN) denoiser that can fully leverage spationspectral correlations within MS images. Our results suggest the generalizability of our MS-RED algorithm, where a single trained DNN can be used to solve several different MS imaging problems. 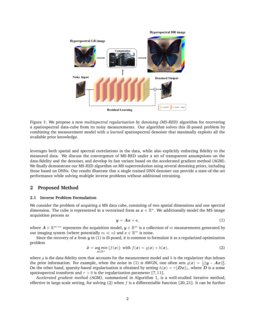 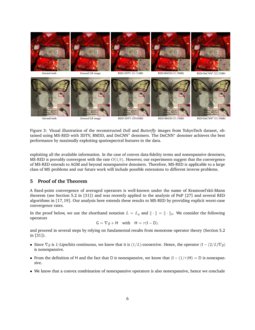 Multispectral (MS) imaging systems acquire the response from an object or a scene over a wide range of frequency bands, including optical, infra-red, and short-wave infra-red [1, 2]

. Multi-band spectra provide rich information for detecting and classifying materials, especially those that have similar visible colors. Additionally, the higher transmission property of infra-red bands, when compared to optical bands, makes the MS imaging beneficial in imaging through haze or fog. As a result, multispectral or even hyperspectral imaging techniques have gained popularity in a number of important applications in astronomy, agriculture, and medical imaging

While MS imaging has a great potential, acquiring and processing corresponding data is challenging due to various hardware limitations and the high-dimensional nature of typical datasets. In particular, the resolution and signal-to-noise ratio (SNR) of MS images is often constrained by limitations on the size, weight, and power of sensors used for data acquisition. Image reconstruction methods have been developed for mitigating such hardware limitations by using advanced priors on the unknown MS image. Traditional priors used in MS image reconstruction include sparsity-based regularizers, low-rank models, and dictionary-learning-based priors [7, 8, 9, 10, 11]. Recently, however, the focus in the field has been shifting towards deep learning techniques that are based on learning the direct mapping from the measurements to the recovered MS image [12, 13, 14, 15]. However, the conceptual simplicity of end-to-end learning comes with the loss of modularity, characterized by the lack of an explicit separation between the measurement model and the prior. This limits the generalization and reuse of previously trained models.

In this paper, we develop a new MS image reconstruction method called multispectral regularization by denoising (MS-RED) that enables the infusion of deep neural net (DNN) priors while maintaining an explicit separation between the prior and the measurement model. By building on the recently developed RED framework [16, 17, 18, 19], our method specifies the learned prior only via a 3D spatiospectral denoising function, trained for the removal of additive white Gaussian noise (AWGN) from MS images. MS-RED naturally leverages both spatial and spectral correlations in the data, while also explicitly enforcing fidelity to the measured data. We discuss the convergence of MS-RED under a set of transparent assumptions on the data-fidelity and the denoiser, and develop its fast variant based on the accelerated gradient method (AGM). We finally demonstrate our MS-RED algortihm on MS superresolution using several denoising priors, including those based on DNNs. Our results illustrate that a single trained DNN denoiser can provide a state-of-the-art performance while solving multiple inverse problems without additional retraining.

We consider the problem of acquiring a MS data cube, consisting of two spatial dimensions and one spectral dimension. The cube is represented in a vectorized form as

x∈Rn. We additionally model the MS image acquisition process as

where A∈Rm×n represents the acquisition model, y∈Rm is a collection of m measurements generated by our imaging system (where potentially m≪n) and e∈Rm is noise.

Since the recovery of x from y in (1) is ill-posed, it is common to formulate it as a regularized optimization problem

where g is the data-fidelity term that accounts for the measurement model and h is the regularizer that infuses the prior information. For example, when the noise in (1) is AWGN, one often sets g(x)=12∥y−Ax∥22. On the other hand, sparsity-based regularization is obtained by setting h(x)=τ∥Dx∥1, where D is a some spatiospectral transform and τ>0 is the regularization parameter [7, 11].

Accelerated gradient method (AGM), summarized in Algorithm 1, is a well-studied iterative method, effective in large-scale setting, for solving (2) when f is a differentiable function [20, 21]. It can be further extended to circumvent the need to differentiate h by using proximal operators [22, 23, 24]. Note that the switch between the standard gradient method (GM) and AGM in Algorithm 1 is controlled via the sequence {qk}. When qk←1 for all k, we obtain GM with O(1/t) convergence rate; when

the algorithms becomes AGM with O(1/t2) convergence. Here, we extend the traditional GM/AGM approach by including a learned denoising function D(⋅) that characterizes a MS image prior.

In the spirit of AGM, we consider Algorithm 2

x by combining the usual gradient of data-fidelity term ∇g with an operator H(x)\coloneqqτ(x−D(x)), where τ>0 is the regularization parameter and D(⋅) is a spactiospectral denoiser. When the algorithm converges, it converges to the vectors in the zero set of the operator G

Note that if x∗∈zer(∇g)∩fix(D), then G(x∗)=0 and x∗ is one of the solutions of RED. Hence, any vector that is consistent with the data for a convex g and noiseless according to D is in the solution set. On the other hand, when zer(∇g)∩fix(D)=∅, then x∗∈zer(G) corresponds to a tradeoff between the two sets, explicitly controlled via τ>0. This explicit control in the strength of regularization is one of the key differences between RED and an alternative plug-and-play priors (PnP) framework [25, 26, 27].

The key benefits of our MS-RED approach is in its explicit separation of the measurement model from the prior, its ability to accommodate powerful spatiospectral denoisers (such as the ones based on DNNs) without differentiating them, and their excellent recovery performance as corroborated by our simulations in Section

Under some conditions on the denoiser, it is possible to relate H(⋅) to some explicit regularization function h. For example, when the denoiser is locally homogeneous and has a symmetric Jacobian [16, 17], the operator H(⋅) corresponds to the gradient of

An alternative justification of RED for another explicit function h is possible by considering minimum mean squared error (MMSE) denoisers [28, 17]. In this paper, we perform a fixed point analysis of MS-RED for denoisers that do not necessarily correspond to any regularizer h. Our analysis complements the analysis in [17] by developing an explicit worst-case convergence rate. We require three assumptions that together serve as sufficient conditions for convergence.

The operator G is such that zer(G)≠∅. There is a finite number R0 such that the distance of the initial x0∈Rn to the farthest element of zer(G) is bounded, that is

This assumption is related to the existence of the minimizers in the traditional optimization literature [20]. The next two assumptions rely on Lipschitz continuity of the data-fidelity and the denoiser.

The function g is smooth and convex. It has a Lipschitz continuous gradient with constant Lg>0.

This is a standard assumption used in gradient-based methods, including for the GM and its proximal extensions [20].

The denoiser D is Lipschitz continuous with constant LD=1.

Since the proximal operator is nonexpansive [29], it automatically satisfies this assumption. Spectral-normalization can be used to make DNNs satisfy this assumption [30].

A proof of the theorem is provided in Section 5. Theorem 1 establishes that the iterates of MS-RED can get arbitrarily close to zer(G) with O(1/t) rate. The proof relies on the monotone operator theory [31, 32], widely used in the context of convex optimization [29].

The analysis in Theorem 1 only provides sufficient conditions for the convergence of MS-RED. As corroborated by our numerical studies in Section, the actual convergence of MS-RED is more general. It often holds with the Nesterov’s acceleration in eq. (3) and beyond nonexpansive denoisers. This suggests that some denoisers might be locally nonexpansive over the set of input vectors used in testing. On the other hand, DNNs can be made globally nonexpansive via spectral-normalization [30], which results in provable convergence.

In this section, we provide several simulations validating our theoretical analysis on multispectral image supper-resolution (MSISR). Generally, the low-resolution (LR) image can be modeled by a blurring and subsequent down-sampling operation on a high resolution one. We test several image denoisers, including 3DTV, BM3D, and our own DnCNN∗ on MS images from TokyoTech database [33]. Originally, those images are of size 500×500×31 with the wavelengths in the range of 420∼720 nm at an interval of 10nm. However, for convenience, we restrict our simulations to 6 of 31 bands to build 500×500×

7×7 with σ=1.6 and blurring by motion kernel of size 19×19 [34], both followed by down-sampling with scale factors 2, 3 and 4. For both kernels, the measurements are corrupted with AWGN corresponding to input signal-to-noise ratio (SNR) of 40 dB.

To take advantage of the ability of DNNs to automatically learn the prior information on a specific image set, we train a residual DNN denoiser denoted as DnCNN∗, which is a simplified version of the popular DnCNN denoiser [35]. DnCNN∗

n1×n2×6 input to n1×n2×64 features maps by using 64 filters of size 3×3. The second block is a sequence of 5 composite convolutional layers, each having 64 filters of size 3×3×64. Those composite layers further processes the feature maps generated by the first part. The third block of the network, a single convolutional layer, generates the final output image with six channels by convolving the feature maps with a 3×3×64

filter. Every convolution is performed with a stride

=1, so that the intermediate feature maps share the same spatial size of the input image. Moreover, the global Lipschitz constant of the DNN is controlled to be LC = 2 via spectral-normalization  [30], which provides a necessary condition for nonexpansiveness of the denoiser (i.e., for LD=1). We choose four MS images for testing, namely Butterfly, Fan, Cloth, and Doll. Three MS images are used for validation, and the rest twenty eight MS images are used for training. We further expand the training set by adopting patch-wise training and using standard data augmentation strategies. We train three variants of DnCNN∗ for the removal of AWGN, each using a separate noise level from σ∈{1,5,10}. For each experiment, we select the denoiser providing the highest SNR performance. The BM3D denoiser was applied in a separable fashion along each MS band. The σ parameter of BM3D was also fine-tuned for each experiment from the set {1,5,10}.

Fig. 2 illustrates the convergence of MS-RED by plotting the per-iteration normalized distance to zer(G) averaged over all the test images. Table 1 summarizes the SNR values for different denoisers averaged over all the images. Fig. 3 visually illustrates the performance by forming pseudo-color images (composed of 22nd, 2nd, and 17th bands) of the results with the scale factor 2 (top) and 3 (bottom). The RED-DnCNN∗ achieves the best SNR performance while also delivering reliable convergence across all instances.

We have presented the MS-RED algorithms for reconstructing MS images from their noisy measurements. The algorithm relies on the integration of a 3D spatiospectral denoiser with the measurement model for maximally exploiting all the available information. In the case of convex data-fidelity terms and nonexpansive denoisers, MS-RED is provably convergent with the rate O(1/t). However, our experiments suggest that the convergence of MS-RED extends to AGM and beyond nonexpansive denoisers. Therefore, MS-RED is applicable to a large class of MS problems and our future work will include possible extensions to different inverse problems.

5 Proof of the Theorem

A fixed-point convergence of averaged operators is well-known under the name of Krasnosel’skii-Mann theorem (see Section 5.2 in [31]) and was recently applied to the analysis of PnP [27] and several RED algorithms in [17, 19]. Our analysis here extends these results to MS-RED by providing explicit worst-case convergence rates.

In the proof below, we use the shorthand notation L=Lg and ∥⋅∥=∥⋅∥2. We consider the following operators

and proceed in several steps by relying on fundamental results from monotone operator theory (Section 5.2 in [31]).