Infrared and visible image fusion is an important problem in the field of image fusion which has been applied widely in many fields. To better preserve the useful information from source images, in this paper, we propose a novel image fusion method based on latent low-rank representation(LatLRR) which is simple and effective. This is the first time that LatLRR is introduced to image fusion. Firstly, the source images are decomposed into low-rank parts(global structure) and saliency parts(local structure) by LatLRR. Then, the low-rank parts are fused by weighted-average strategy, and the saliency parts are simply fused by sum strategy. Finally, the fused image is obtained by combining the fused low-rank part and the fused saliency part. Compared with other fusion methods experimentally, the proposed method has better fusion performance than state-of-the-art fusion methods in both subjective and objective evaluation. The Code of our fusion method is available at https://github.com/exceptionLi/imagefusion_Infrared_visible_latlrr 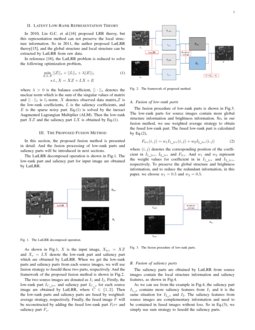 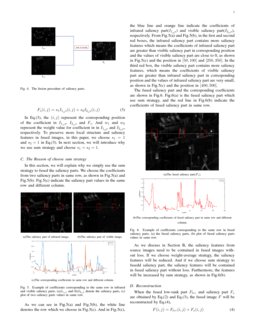 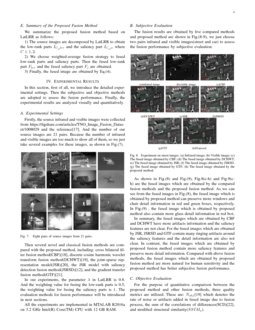 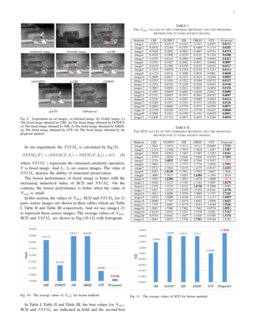 As we all know, the most commonly used method in image fusion are multi-scale transforms, such as discrete wavelet transform(DWT)DWT2005 , contourlet trnsformcontourlet2010 , shift-invariant shearlet transformshearlet2014 and quaternion wavelet transformquaternion wavelet2013 etc. Due to the conventional tansform methods has not enough detail preservation ability, Lou et al.nonshearlet2017 proposed a fusion method based on contextual statistical similarity and nonsubsampled shearlet transform which can obtain the local structure information from source image and get good fusion performance. For infrared and visible image fusion, Bavirisetti et al.twoscale2016 proposed a fusion method based on two-scale decomposed and saliency detection, they used mean filter and median filter to extract the base layers and detail layers, and used visual saliency to obtain weight maps. Finally, the fused image is obtained by calculating these three parts. Besides above methods, Zhang et al.morphological2017 proposed a morphological gradient based fusion method. This method used the different morphological gradient operator to obtain the focus region, defocus region and focus boundary region, respectively. Then the fused image is obtained by using an appropriate fusion strategy. Besides, Luo et al.Luo2017JVCIR proposed an novel image fusion method based on HOSVD and edge intensity. And a fuzzy transform based fusion method was proposed by Manchanda et al.Manchanda2018 . These methods both obtain better fusion performance in subjective and objective evaluation.

proposed a novel medical image fusion method based on SR. They used the Histogram of Oriented Gradient(HOG) features to classify the image patches and learned several sub-dictionaries. Then this method used the

-norm and choose-max strategy to reconstruct fused image. In addition, there are many methods based on combining SR and other tools which are pulse coupled neural network(PCNN)

In deep learning field, deep features of the source images are used to reconstruct the fused image. In

also proposed a convolutional neural network(CNN)-based fusion method. Image patches which contain different blur versions of the input image are used to train the network and get a decision map. The fused image is obtained by using the decision map and the source images. However, these deep learning-based methods still have drawbacks which the network is difficult to train when the training data is not enough, especially in infrared and visible image fusion task.

This paper is structured as follows. In Section 2, we give a brief introduction to LatLRR theory. In Section 3, the proposed LatLRR based image fusion method is introducted in detail. The experimental results are shown in Section 4. Finally, Section 5 draws the conclusions.

In 2010, Liu et al.Lrr2010 proposed LRR theroy, but this representation method can not preserve the local structure information. So in 2011, the author proposed LatLRR theroylatentLrr2011 , and the global structure and local structure can be extracted by LatLRR from raw data.

In referencelatentLrr2011 , the LatLRR problem is reduced to solve the following optimization problem,

In this section, the proposed fusion method is presented in detail. And the fusion processing of low-rank parts and saliency parts will be introduced in next sections.

The LatLRR decomposed operation is shown in Fig.1. The low-rank part and saliency part for input image X are obtained by LatLRR.

where (i,j) denotes the corresponding position of the coefficient in I1_lrr, I2_lrr and Flrr. And w1 and w2 represent the weight values for coefficient in in I1_lrr and I2_lrr, respectively. To preserve the global structure and brightness information, and to reduce the redundant information, in this paper, we choose w1=0.5 and w2=0.5.

The saliency parts contain the local structure information and saliency features, as shown in Fig.3.

In Eq.(3), the (i,j) represent the corresponding position of the coefficient in I1_s, I2_s and Fs. And w1 and w2 represent the weight value for coefficient in in I1_s and I2_s, respectively. To preserve more local structure and saliency features in fused images, in this paper, we choose s1=1 and s2=1 in Eq.(3). In next section, we will introduce why we use sum strategy and choose s1=s2=1.

3.3 The Reason of choose sum strategy

In this section, we will explain why we simply use the sum strategy to fused the saliency parts. We choose the coefficients from two saliency parts in same row, as shown in Fig.4(a) and Fig.4(b). Fig.4(c) indicate the saliency part values in the same row and different column.

When the fused low-rank part Flrr and saliency part Fs are obtained by Eq.(2) and Eq.(3), the fused image F will be reconstructed by Eq.(4),

3.5 Summary of the Proposed Fusion Method

We summarize the proposed fusion method based on LatLRR as follows:

1) The source images are decomposed by LatLRR to obtain the low-rank parts IC_lrr and the saliency part IC_s, where C∈1,2.

In this section, first of all, we introduce the detailed experimental settings. Then the subjective and objective methods are adopted to assess the fusion performance. Finally, the experimental results are analyzed visually and quantitatively.

The fusion results are obtained by five compared methods and proposed method are shown in Fig.7 - 8, we just choose two pairs infrared and visible images(“stree” and “ca”) to assess the fusion performance by subjective evaluation.

For the purpose of quantitative comparison between the proposed method and other fusion methods, four quality metrics are utilized. These are: QabfQabf , Nabfdchwt2012 which denotes the rate of noise or artifacts added in fused image due to fusion process, the sum of the correlations of differences(SCD)scd2015 , and modified structural similarity(SSIMa).

In our experiment, the SSIMa is calculated by Eq.(5),

where SSIM(⋅) represents the structural similarity operation, F is fused image. And I1, I2 are source images. The value of SSIMa denotes the ability of structural preservation.

The average values of Nabf, SCD and SSIMa for 21 pairs source images are shown in Table 1. And more experimental data are shown in our supplementary material file.

These values indicate that the fused images which are obtained by the proposed method are more natural and contain less artificial information. From objective evaluation, our fusion method has better fusion performance than those compared methods.

In this paper, we proposed a simple and effective infrared and visible image fusion method based on latent low-rank representation. Firstly, the source images are decomposed into low-rank parts and saliency parts which contain global structure and local structure information, respectively. Then the fused low-rank part and saliency part are obtained by weighted-average strategy, and we choose different weight value for these two parts. Finally, the fused image is reconstructed by adding the fused low-rank part and the fused saliency part. We use both subjective and objective methods to evaluate the proposed method, the experimental results show that the proposed method exhibits better performance than other compared methods.

The values of Qabf, SCD, SSIMa and Nabf for 21 pairs source images are shown in Table 2 - Table 5.