The posthoc verification protocol [J. F. Fitzsimons, M. Hajdušek, and T. Morimae, Physical Review Letters 120, 040501 (2018)] enables an information-theoretically-sound non-interactive verification of quantum computing, but the message from the prover to the verifier is quantum and the verifier has to do single-qubit measurements. The Mahadev protocol removes these quantum parts, but the soundness becomes the computational one. In this paper, we construct an information-theoretically-sound non-interactive classical verification protocol for quantum computing with a trusted center. The trusted center sends random BB84 states to the prover, and the classical descriptions of these BB84 states to the verifier. The messages from the center to the prover and the verifier are independent of the instance. By slightly modifying our protocol, we also construct a non-interactive statistical zero-knowledge proof system for QMA with the trusted center. 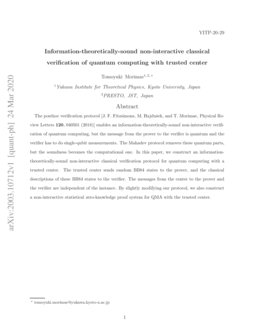 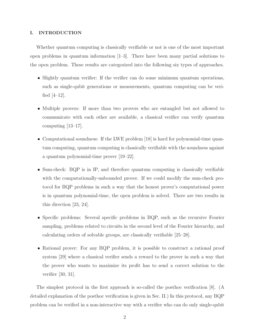 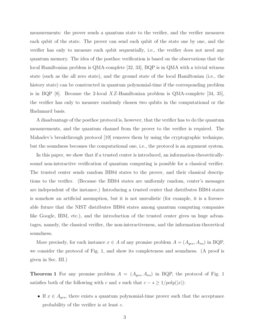 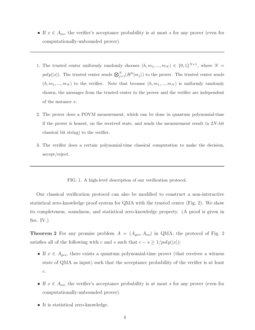 In future, information may become one of the most important assets in ec...
Yuqing Kong, et al. ∙

Whether quantum computing is classically verifiable or not is one of the most important open problems in quantum information Gottesman ; AharonovVazirani ; Andru_review . There have been many partial solutions to the open problem. These results are categorized into the following six types of approaches.

The simplest protocol in the first approach is so-called the posthoc verification posthoc . (A detailed explanation of the posthoc verification is given in Sec. II.) In this protocol, any BQP problem can be verified in a non-interactive way with a verifier who can do only single-qubit measurements: the prover sends a quantum state to the verifier, and the verifier measures each qubit of the state. The prover can send each qubit of the state one by one, and the verifier has only to measure each qubit sequentially, i.e., the verifier does not need any quantum memory. The idea of the posthoc verification is based on the observations that the local Hamiltonian problem is QMA-complete Kitaev ; KKR , BQP is in QMA with a trivial witness state (such as the all zero state), and the ground state of the local Hamiltonian (i.e., the history state) can be constructed in quantum polynomial-time if the corresponding problem is in BQP posthoc . Because the 2-local XZ-Hamiltonian problem is QMA-complete BL08 ; CM16 , the verifier has only to measure randomly chosen two qubits in the computational or the Hadamard basis.

A disadvantage of the posthoc protocol is, however, that the verifier has to do the quantum measurements, and the quantum channel from the prover to the verifier is required. The Mahadev’s breakthrough protocol Mahadev removes them by using the cryptographic technique, but the soundness becomes the computational one, i.e., the protocol is an argument system.

In this paper, we show that if a trusted center is introduced, an information-theoretically-sound non-interactive verification of quantum computing is possible for a classical verifier. The trusted center sends random BB84 states to the prover, and their classical descriptions to the verifier. (Because the BB84 states are uniformly random, center’s messages are independent of the instance.) Introducing a trusted center that distributes BB84 states is somehow an artificial assumption, but it is not unrealistic (for example, it is a foreseeable future that the NIST distributes BB84 states among quantum computing companies like Google, IBM, etc.), and the introduction of the trusted center gives us huge advantages, namely, the classical verifier, the non-interactiveness, and the information-theoretical soundness.

More precisely, for each instance x∈A of any promise problem A=(Ayes,Ano) in BQP, we consider the protocol of Fig. 1, and show its completeness and soundness. (A proof is given in Sec. III.)

For any promise problem A=(Ayes,Ano) in BQP, the protocol of Fig. 1 satisfies both of the following with c and s such that c−s≥1/poly(|x|):

For any promise problem A=(Ayes,Ano) in QMA, the protocol of Fig. 2 satisfies all of the following with c and s such that c−s≥1/poly(|x|):

The idea is based on the recent elegant construction of zero-knowledge systems for QMA in Ref. BroadbentGrilo

. In their construction, the prover sends the verifier the one-time-padded ground state of the Hamiltonian that corresponds to the encoded version of the verification circuit, and a classical commitment of the one-time-pad key. After receiving a challenge from the verifier, the prover opens only a small part of the ground state, which is enough to measure energy but not enough to get any information about the witness due to the local simulatability

BroadbentGrilo ; GSY . A zero-knowledge system for QMA was first constructed in Ref. BJSW , and improvements have been obtained recently CVZ ; Alagic ; BroadbentGrilo .

Let A=(Ayes,Ano) be a promise problem in BQP. For any instance x∈A, we can construct an N-qubit local Hamiltonian

with N=poly(|x|) such that if x∈Ayes then the ground energy is less than α, and if x∈Ano then the ground energy is larger than β with β−α≥1/poly(|x|). Here, pi,j>0, ∑i<jpi,j=1, and si,j∈{+1,−1}. The posthoc protocol posthoc runs as in Fig. 3. Note that in this protocol, the verifier does not need any quantum memory, because the verifier has only to measure each qubit sequentially. The verifier’s acceptance probability is pacc=1−Tr(ρH). Therefore, if x∈Ayes, pacc≥1−α for an honest prover, and if x∈Ano, pacc≤1−β for any (computationally-unbounded) prover. The completeness-soundness gap is (1−α)−(1−β)=β−α≥1/poly(|x|). It is easy to see that this protocol can be done in the parallel way to amplify the completeness-soundness gap.

There is a remark: In the original posthoc protocol posthoc , the verifier first samples (i,j) with probability pi,j and measures ith and jth qubits. The protocol explained in Fig. 3 is slightly modified from the original posthoc protocol in such a way that the verifier’s measurement is independent of the instance x. Such a modification was already done in Refs. Alagic ; BroadbentGrilo ; Vidick_review , and in fact the modification is crucial for our purpose, because the trusted center’s message should be independent of the instance x.

In this paper, we have constructed an information-theoretically-sound non-interactive classical verification protocol for quantum computing with a trusted center. The trusted center sends randomly chosen BB84 states to the prover, and their classical descriptions to the verifier.

One might ask whether the quantum message from the center to the prover can be replaced with a classical one. It will be impossible, because if it was possible, then BQP is in AM, which is unlikely. To see it, assume that the trusted center sends some random classical messages to the prover. Then, the message can be sent from the verifier instead of the center, and it is a two-message AM protocol.

The combination of the trusted center considerd in this paper and the Fitzsimons-Kashefi protocol FK also realizes the information-theoretically-sound classical verification of quantum computing, but in that case, the protocol is interactive: polynomially-many rounds are necessary between the prover and the verifier. Furthermore, the messages sent from the trusted center do depend on the instance.