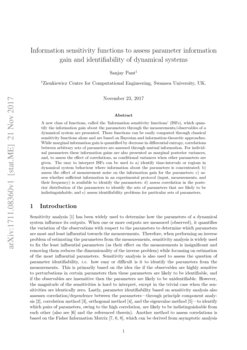 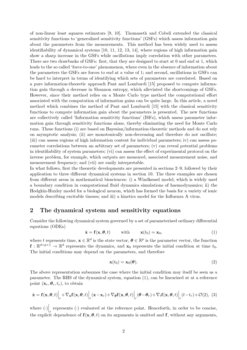 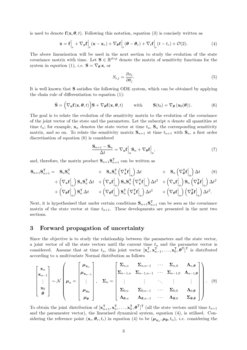 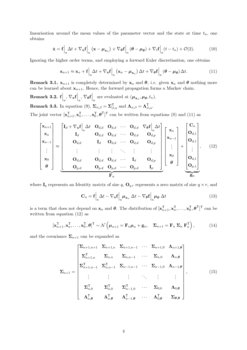 To investigate the robustness of the output probabilities of a Bayesian ...
Uffe Kjærulff, et al. ∙

Many problems in the geophysical sciences demand the ability to calibrat...
Sara Pérez-Vieites, et al. ∙

An approach based on the Fisher information (FI) is developed to quantif...
James H. Durant, et al. ∙

i.e. how easy or difficult is it to identify the parameters from the measurements. This is primarily based on the idea the if the observables are highly sensitive to perturbations in certain parameters then these parameters are likely to be identifiable, and if the observables are insensitive then the parameters are likely to be unidentifiable. However, the magnitude of the sensitivities is hard to interpret, except in the trivial case when the sensitivities are identically zero. Lastly, parameter identifiability based on sensitivity analysis also assesses correlation/dependence between the parameters—through principle component analysis [2], correlation method [3], orthogonal method [4]

, and the eigenvalue method

[5]—to identify which pairs of parameters, owing to the high correlation, are likely to be indistinguishable from each other (also see [6] and the referenced therein). Another method to assess correlations is based on the Fisher Information Matrix [7, 6, 8]

, which can be derived from asymptotic analysis of non-linear least squares estimators

[9, 10]. Thomaseth and Cobeli extended the classical sensitivity functions to ‘generalized sensitivity functions’ (GSFs) which assess information gain about the parameters from the measurements. This method has been widely used to assess identifiability of dynamical systems [10, 11, 12, 13, 14], where regions of high information gain show a sharp increase in the GSFs while oscillations imply correlation with other parameters. There are two drawbacks of GSFs: first, that they are designed to start at 0 and end at 1, which leads to the so called ‘force-to-one’ phenomenon, where even in the absence of information about the parameters the GSFs are forces to end at a value of 1; and second, oscillations in GSFs can be hard to interpret in terms of identifying which sets of parameters are correlated. Based on a pure information-theoretic approach Pant and Lombardi [15] proposed to compute information gain through a decrease in Shannon entropy, which alleviated the shortcomings of GSFs. However, since their method relies on a Monte Carlo type method the computational effort associated with the computation of information gains can be quite large. In this article, a novel method which combines the method of Pant and Lombardi [15] with the classical sensitivity functions to compute information gain about the parameters is presented. The new functions are collectively called ‘Information sensitivity functions’ (ISFs), which assess parameter information gain through sensitivity functions alone, thereby eliminating the need for Monte Carlo runs. These functions (i) are based on Bayesian/information-theoretic methods and do not rely on asymptotic analysis; (ii) are monotonically non-decreasing and therefore do not oscillate; (iii) can assess regions of high information content for individual parameters; iv) can assess parameter correlations between an arbitrary set of parameters; (v) can reveal potential problems in identifiability of system parameters; (vi) can assess the effect of experimental protocol on the inverse problem, for example, which outputs are measured, associated measurement noise, and measurement frequency; and (vii) are easily interpretable.

In what follows, first the theoretic developments are presented in sections 2–9, followed by their application to three different dynamical systems in section 10

. The three examples are chosen from different areas in mathematical biosciences: i) a Windkessel model, which is widely used a boundary condition in computational fluid dynamics simulations of haemodynamics; ii) the Hodgkin-Huxley model for a biological neuron, which has formed the basis for a variety of ionic models describing excitable tissues; and iii) a kinetics model for the Influenza A virus.

2 The dynamical system and sensitivity equations

is the state vector,

The above representation subsumes the case where the initial condition may itself be seen as a parameter. The RHS of the dynamical system, equation (1), can be linearised at at a reference point (xr,θr,tr), to obtain

where (⋅)∣∣r represents (⋅) evaluated at the reference point. Henceforth, in order to be concise, the explicit dependence of f(x,θ,t) on its arguments is omitted and f, without any arguments, is used to denote f(x,θ,t). Following this notation, equation (3) is concisely written as

The above linearisation will be used in the next section to study the evolution of the state covariance matrix with time. Let S∈Rd×p denote the matrix of sensitivity functions for the system in equation (1), i.e. S=∇θx, or

It is well known that S

satisfies the following ODE system, which can be obtained by applying the chain rule of differentiation to equation (

and, therefore, the matrix product Sn+1STn+1 can be written as

Next, it is hypothesised that under certain conditions Sn+1STn+1 can be seen as the covariance matrix of the state vector at time tn+1. These developments are presented in the next two sections.

is distributed according to a multivariate Normal distribution as follows

To obtain the joint distribution of

Ignoring the higher order terms, and employing a forward Euler discretisation, one obtains

xn+1 is completely determined by xn and θ, i.e. given xn and θ nothing more can be learned about xn+1

represents an Identity matrix of size

represents a zero matrix of size

is a term that does not depend on xn and θ. The distribution of [xTn+1,xTn,…,xT0,θT]T can be written from equation (12) as

and the covariance Σn+1 can be expanded as

If the above evolution of the covariance matrix can be related to the evolution of the sensitivity matrix, as presented in the section 2 and equation (8), then the dependencies between the state vector and the parameters can be studied. This concept is developed in the next section.

4 Relationship between sensitivity and forward propagation of uncertainty

Under the above assumptions, it can be deduced from equations (4) and (8) that

which, as evident from equation (7), is the standard forward propagation of the sensitivity matrix. Hence

Finally, the term Σn+1,n from equation (18) can be written as

From equations (23), (24), and (25), it can be concluded that if the initial prior uncertainty in [xT0,θ]T is assumed to be Gaussian with covariance

then the joint vector of θ, the parameters, and [xTn,xTn−1,…,xT0]T, the state-vector corresponding to time instants [t0,t1,…,tn]

, can be approximated, by considering only the first-order terms after linearisation, to be a Gaussian distribution with the following covariance

Note that a prior mean for the vector [xT0,θT]T is assumed to be

based on which the mean vector of the state will propagate according to equation (11), essentially according to the forward Euler method. While this propagated mean does not directly influence the posterior uncertainty of the parameters, which depends only on the covariance matrix, it is important to note that the sensitivity terms in the covariance matrix of equation (27) are evaluated at the propagated means. The propagated mean of the joint vector [xTn,xTn−1,…,xT0,θT]T is referred throughout this manuscript as μn=[μTxn,μTxn−1,…,μTx0,μTθ]T.

The required conditions presented in equations (20), (21), and (22), can also be derived without temporal discretisation of the sensitivity and linearised forward model. This is presented in Appendix A.

where Hn∈Rm×d is the observation operator at time tn and ϵn is the measurement noise. Let ϵn be independently (across all measurement times) distributed as

where Om is a zero vector and Υn is the covariance structure of the noise. From equations (27) and (29), it is easy to see that [yTn,yTn−1,…,yT0,θ]T follows a Gaussian distribution with the following mean and covariance

A non-linear observation operator H in equation (29), as opposed to the linear operator H, does not present any technical challenges to the formulation as it can be linearised at the current mean values. Following this, in equations (32) and (33), H would need to be replaced by the tangent operator ∇H∣∣n.

6 Conditional distribution of the parameters

denotes the measurement value (the realisation of the random variable

yn observed) at ti. Note that the conditional covariance Cn is independent of these measurement values yoi. Furthermore, since the uncertainty in a Gaussian random variable, quantified by the differential entropy, depends only on the covariance matrix, the posterior distribution uncertainty does not depend on the measurements.

7 Asymptotic analysis of the conditional covariance

In this section, the behaviour of the conditional covariance matrix Cn as n→∞ is considered. From equation (32) An can be written as

where Γn is a diagonal matrix with elements as follows

Plugging this in equation (36) yields

is symmetric, and can be factorised by singular value decomposition (SVD) as follows

and Φn is a diagonal matrix with diagonal entries equal to the eigenvalues, λi, of Dn.

In the above Pn is a diagonal matrix with the entries

If the minimum eigenvalue of Dn is much larger than 1, i.e.

Finally, from the above and equations (42), (38), and (33), the conditional covariance matrix can be written as

Let the eigenvalues of Dn be denoted in decreasing order as λ1(Dn)≥λ2(Dn)≥…≥λp(Dn). The behaviour of the minimum eigenvalue of λp(Dn) is of concern. Note that Dn can be written as

where Tr denotes the trace. Expressed in terms of the eigenvalues of the respective matrices, the above reads

From several inequalities on the sums of eigenvalues of Hermitian matrices, specifically the Ky Fan inequality [16, 17], one has

which implies that the minimum eigenvalue of Dn is monotonically increasing.

[9, 10] by assuming that the observation operator Hi is equal to identity for all i. Then, under a further assumption that is full-rank for all i, the conditional covariance matrix of the parameter is

where M is the Fisher information matrix defined as

where Pn is given by equation (51). Consider the matrix (Dn+Ip)−1, it can be expanded as

Following the above and equation (58), the conditional covariance matrix can be written as

where det(⋅) denotes the determinant. The above can be expanded through equation (73) as

where \mathsfits is the cardinality of S, and S{S}∈Rd×\mathsfits and S{Sc}∈Rd×(p−\mathsfits) are the sensitivity matrices for θ{S} and θ{Sc}, respectively, i.e. S{S}=∇θ{S}x and S{Sc}=∇θ{Sc}x. Given the above decomposition, the marginal covariance of θ{S} given the measurements can be written as the Schur complement of the matrix [Ip−\mathsfits+∑ni=0(S{Sc}TiHTiΥ−1iHiS{Sc}i)] in Cn as follows

and the information gain I{S}n as