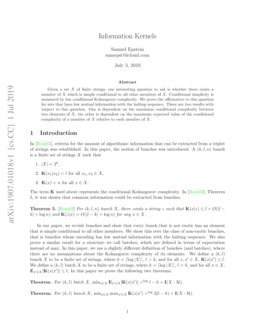 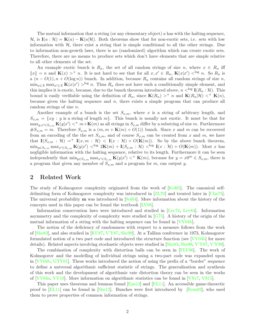 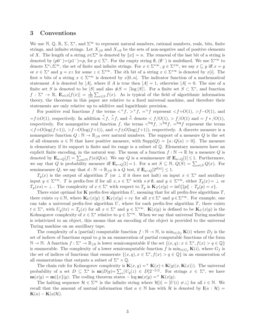 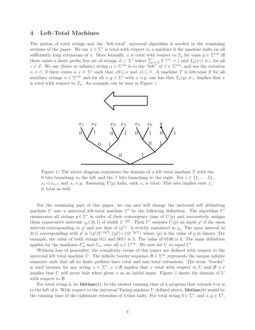 In [Rom03], criteria for the amount of algorithmic information that can be extracted from a triplet of strings was established. In this paper, the notion of bunches was introduced. A (k,l,n) bunch is a finite set of strings X such that

The term K used above represents the conditional Kolmogorov complexity. In [Rom03], Theorem 5, it was shown that common information could be extracted from bunches.

The mutual information that a string (or any elementary object) a has with the halting sequence, H, is I(a:H)=K(a)−K(a|H). Both theorems show that for non-exotic sets, i.e. sets with low information with H, there exist a string that is simple conditional to all the other strings. Due to information non-growth laws, there is no (randomized) algorithm which can create exotic sets. Therefore, there are no means to produce sets which don’t have elements that are simple relative to all other elements of the set.

Another example of a bunch is the set Sx,m, where x is a string of arbitrary length, and Sx,m={xy:y is a string of length m}. This bunch is usually not exotic. It must be that for maxy,x′∈Sx,mK(y|x′)<+m+K(m) as all strings in Sx,m differ by a substring of size m. Furthermore #Sx,m=m. Therefore Sx,m is a (m,m+K(m)+O(1)) bunch. Since x and m can be recovered from an encoding of the the set Sx,m, and of course Sx,m can be created from x and m, we have that I(Sx,m:H)=+I(x,m:H)<I(x:H)+O(K(m)). So by the above bunch theorem, miny∈Sx.mmaxx′∈Sx,mK(y|x′)<log2K(m)+I(Sx,m:H)<logI(x:H)+O(K(m)). Most x has negligible information with the halting sequence, relative to its length. Furthermore it can be seen independently that miny∈Sx,mmaxx′∈Sx,mK(y|x′)<+K(m), because for y=x0m∈Sx,m, there is a program that given any member of Sx,m and a program for m, can output y.

m was introduced in [Sol64]. More information about the history of the concepts used in this paper can be found the textbook [LV08].

Information conservation laws were introduced and studied in [Lev74, Lev84]. Information asymmetry and the complexity of complexity were studied in [G7́5]. A history of the origin of the mutual information of a string with the halting sequence can be found in [VV04b].

The notion of the deficiency of randomness with respect to a measure follows from the work of [She83], and also studied in [KU87, V’Y87, She99]. At a Tallinn conference in 1973, Kolmogorov formulated notion of a two part code and introduced the structure function (see [VV04b] for more details). Related aspects involving stochastic objects were studied in [She83, She99, V’Y87, V’Y99].

The combination of complexity with distortion balls can be seen in [FLV06]. The work of Kolmogorov and the modelling of individual strings using a two-part code was expanded upon in [VV04b, GTV01]. These works introduced the notion of using the prefix of a “border” sequence to define a universal algorithmic sufficient statistic of strings. The generalization and synthesis of this work and the development of algorithmic rate distortion theory can be seen in the works of [VV04a, VV10]. More information on algorithmic statistics can be found in [VS17, VS15].

This paper uses theorems and lemmas found [Eps13] and [EL11]. An accessible game-theoretic proof to [EL11] can be found in [She12]. Bunches were first introduced by  [Rom03], who used them to prove properties of common information of strings.

We use N, Q, R, Σ, Σ∗, and Σ∞ to represent natural numbers, rational numbers, reals, bits, finite strings, and infinite strings. Let X≥0 and X>0 be the sets of non-negative and of positive elements of X. The length of a string x∈Σn is denoted by ∥x∥=n. The removal of the last bit of a string is denoted by (p0−)=(p1−)=p, for p∈Σ∗. For the empty string ∅, (∅−) is undefined. We use Σ∗∞ to denote Σ∗∪Σ∞, the set of finite and infinite strings. For x∈Σ∗∞, y∈Σ∗∞, we say x⊑y iff x=y or x∈Σ∗ and y=xz for some z∈Σ∗∞. The ith bit of a string x∈Σ∗∞ is denoted by x[i]. The first n bits of a string x∈Σ∗∞ is denoted by x[0..n]. The indicator function of a mathematical statement A is denoted by [A], where if A is true then [A]=1, otherwise [A]=0. The size of a finite set S is denoted to be |S| and also #S = ⌈log|S|⌉. For a finite set S⊂Σ∗, and function f:Σ∗→R, Ex∈S[f(x)]=1|S|∑x∈Sf(x). As is typical of the field of algorithmic information theory, the theorems in this paper are relative to a fixed universal machine, and therefore their statements are only relative up to additive and logarithmic precision.

The chain rule for Kolmogorov complexity is

The halting sequence H∈Σ∞ is the infinite string where H[i]=[U(i)≠⊥] for all i∈N. We recall that the amount of mutual information that a∈N has with H is denoted by I(a:H)=K(a)−K(a|H).

The notion of total strings and the “left-total” universal algorithm is needed in the remaining sections of the paper. We say x∈Σ∗ is total with respect to a machine if the machine halts on all sufficiently long extensions of x. More formally, x is total with respect to Ty for some y∈Σ∗∞ iff there exists a finite prefix free set of strings Z⊂Σ∗ where ∑z∈Z2−∥z∥=1 and Ty(xz)≠⊥ for all z∈Z. We say (finite or infinite) string α∈Σ∗∞ is to the “left” of β∈Σ∗∞, and use the notation α⊲β, if there exists a x∈Σ∗ such that x0⊑α and x1⊑β. A machine T is left-total if for all auxiliary strings α∈Σ∗∞ and for all x,y∈Σ∗ with x⊲y, one has that Tα(y)≠⊥ implies that x is total with respect to Tα. An example can be seen in Figure 1.

For the remaining part of this paper, we can and will change the universal self delimiting machine U into a universal left-total machine U′ by the following definition. The algorithm U′ enumerates all strings p∈Σ∗ in order of their convergence time of U(p) and successively assigns them consecutive intervals ip⊂[0,1] of width 2−∥p∥. Then U′ outputs U(p) on input p′ if the open interval corresponding to p′ and not that of (p′)− is strictly contained in ip. The open interval in [0,1] corresponding with p′ is ((p′)2−∥p′∥,((p′)+1)2−∥p′∥) where (p) is the value of p in binary. For example, the value of both strings 011 and 0011 is 3. The value of 0100 is 4. The same definition applies for the machines U′α and Uα, over all α∈Σ∗∞. We now set U to equal U′.

Without loss of generality, the complexity terms of this paper are defined with respect to the universal left total machine U. The infinite border sequence B∈Σ∞ represents the unique infinite sequence such that all its finite prefixes have total and non total extensions. The term “border” is used because for any string x∈Σ∗, x⊲B implies that x total with respect to U and B⊲x implies that U will never halt when given x as an initial input. Figure 2 shows the domain of U with respect to B.

For total string b, let bbtime(b), be the slowest running time of a program that extends b or is to the left of b. With respect to the universal Turing machine U defined above, bbtime(b) would be the running time of the rightmost extension of b that halts. For total string b∈Σ∗, and x,y∈Σ∗, let mb(x|y) be the algorithmic weight of x from programs conditioned on y in time bbtime(b). More formally, mb(x|y)=∑{2−∥p∥:Uy(p)=x in time bbtime(b)}. The term mb(x|y) is 0 if b is not total. Let Kb(x|y)=⌈−logmb(x|y)⌉, and Kb(x|y)=∞ if mb(x|y) is 0.

In algorithmic statistics, a string is stochastic if it is typical of a simple probability measure. Properties of stochastic (and non-stochastic) strings can be found in the survey [VS17]. The deficiency of randomness of x with respect to elementary probability measure Q and v∈Σ∗ is d(x|Q,v)=⌈−logQ(x)⌉−K(x|v). The function d(⋅|Q,v) is a Q-test (up to an additive constant). It is also universal, in that for any lower semicomputable Q-test d, and v∈Σ∗, for all x∈Σ∗, d(x)<+d(x|Q,v)+K(d|v)+K(Q|v), as shown in [G1́3].

Stochasticity follows non-growth laws; a total computable function cannot increase the stochasticity of a string by more than a constant factor dependent on its complexity. Lemma 1 illustrates this point. Another variant of the same idea can be found in Proposition 5 in [VS17].

The following lemma is taken from [EL11]. It states that the stochasticity measure of a string lower bounds its information with the halting sequence. Another version of the lemma can be found in [Eps13]. Even though the stochasticity measure Λ is larger in this paper than in [Eps13], changing from 3logd to 3d, the arguments in the proof still hold.

The following lemma is also from [Eps13]. It shows is that if a prefix of the border sequence is simple relative to a string x, then it will be the common information between x and the halting sequence H. Note that if a string b is total and b− is not, then b−⊏B, due to the fact that b− has total and non-total extensions.

The following theorem is from [EL11]. It states that sets that are not exotic, i.e. sets with low mutual information with the halting sequence, have simple members that contain a large portion of the algorithmic weight of the sets. It is compatible with this paper’s stochasticity definition because the term Λ used here is larger than the stochasticity measure used in [EL11].

We recall that a (k,l) batch X is a finite set of strings, where k=#X, l>k, and for all x∈X, Ex′∈X[K(x|x′)]≤l. The following theorem says that for non-exotic batches, there is an element of X that is simple, on average, conditional to all other members of X.

Let {Gi} be a computable enumeration of all finite subsets of G. Let f be a function that when given a set H⊂Σ∗, #H>2, outputs an encoding of the first finite subset W⊂G in the list {Gi} such that W⊂GH1∩GH2 and κ(W)>0.25. On all other inputs which are not an encoded finite set H⊂Σ∗ with #H>2, T outputs the empty string. The function f is total computable relative to b, with K(f|b)=O(1), because given H and b, it is computable to determine whether a given function g∈G is in GH1∩GH2.

So we have that

We recall that a (k,l) bunch X is a finite set of strings, where k=#X, l>k, and for all x,x′∈X, K(x|x′)≤l. The following theorem says that for non-exotic bunches, there is an element of X that is simple conditional to all other members of X.