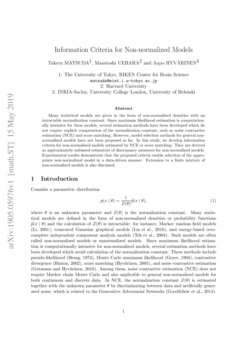 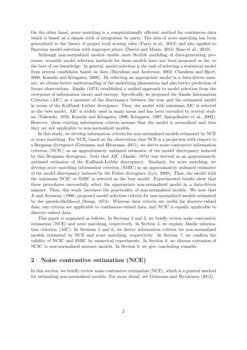 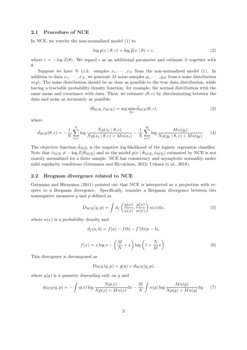 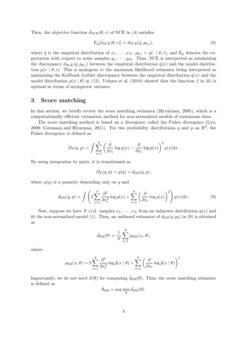 where θ is an unknown parameter and Z(θ)

is the normalization constant. Many statistical models are defined in the form of non-normalized densities or probability functions

. Among them, noise contrastive estimation (NCE) does not require Markov chain Monte Carlo and also applicable to general non-normalized models for both continuous and discrete data. In NCE, the normalization constant

Z(θ) is estimated together with the unknown parameter θ by discriminating between data and artificially generated noise, which is related to the Generative Adversarial Networks (Goodfellow et al., 2014). On the other hand, score matching is a computationally efficient method for continuous data which is based on a simple trick of integration by parts. The idea of score matching has been generalized to the theory of proper local scoring rules (Parry et al., 2012) and also applied to Bayesian model selection with improper priors (Dawid and Musio, 2015; Shao et al., 2019).

Although non-normalized models enable more flexible modeling of data-generating processes, versatile model selection methods for these models have not been proposed so far, to the best of our knowledge. In general, model selection is the task of selecting a statistical model from several candidates based on data (Burnham and Anderson, 2002; Claeskens and Hjort, 2008; Konishi and Kitagawa, 2008). By selecting an appropriate model in a data-driven manner, we obtain better understanding of the underlying phenomena and also better prediction of future observations. Akaike (1974)

established a unified approach to model selection from the viewpoint of information theory and entropy. Specifically, he proposed the Akaike Information Criterion (AIC) as a measure of the discrepancy between the true and the estimated model in terms of the Kullback–Leibler divergence. Thus, the model with minimum AIC is selected as the best model. AIC is widely used in many areas and has been extended by several studies

(Takeuchi, 1976; Konishi and Kitagawa, 1996; Kitagawa, 1997; Spiegelhalter et al., 2002). However, these existing information criteria assume that the model is normalized and thus they are not applicable to non-normalized models.

In this section, we briefly review noise contrastive estimation (NCE), which is a general method for estimating non-normalized models. For more detail, see Gutmann and Hyvärinen (2012).

In NCE, we rewrite the non-normalized model (1) to

where c=−logZ(θ). We regard c as an additional parameter and estimate it together with θ.

Suppose we have N i.i.d. samples x1,⋯,xN from the non-normalized model (1). In addition to data x1,⋯,xN, we generate M noise samples y1,⋯,yM from a noise distribution n(y)

. The noise distribution should be as close as possible to the true data distribution, while having a tractable probability density function: for example, the normal distribution with the same mean and covariance with data. Then, we estimate

(θ,c) by discriminating between the data and noise as accurately as possible:

is the negative log-likelihood of the logistic regression classifier. Note that

^cNCE≠−logZ(^θNCE) and so the model p(x∣^θNCE,^cNCE) estimated by NCE is not exactly normalized for a finite sample. NCE has consistency and asymptotic normality under mild regularity conditions (Gutmann and Hyvärinen, 2012; Uehara et al., 2018).

where n(x) is a probability density and

This divergence is decomposed as

where g(q) is a quantity depending only on q and

Then, the objective function ^dNCE(θ,c) of NCE in (4) satisfies

In this section, we briefly review the score matching estimator (Hyvärinen, 2005), which is a computationally efficient estimation method for non-normalized models of continuous data.

The score matching method is based on a divergence called the Fisher divergence (Lyu, 2009; Gutmann and Hirayama, 2011)

q and p on Rd, the Fisher divergence is defined as

By using integration by parts, it is transformed as

where g(q) is a quantity depending only on q and

Now, suppose we have N i.i.d. samples x1,⋯,xN from an unknown distribution q(x) and fit the non-normalized model (1). Then, an unbiased estimator of dSM(q,pθ) in (9) is obtained as

Importantly, we do not need Z(θ) for computing ^dSM(θ). Thus, the score matching estimator is defined as

This estimator has consistency and asymptotic normality under mild regularity conditions (Hyvärinen, 2005).

Hyvärinen (2007) extended score matching to non-normalized models on Rd+=[0,∞)d by considering the divergence

For exponential families, the objective functions of the score matching estimators reduce to quadratic forms (Hyvärinen, 2007; Forbes and Lauritzen, 2015). Specifically, for an exponential family

on Rd or Rd+, the function ρSM(x,θ) or ρSM+(x,θ) is given by a quadratic form

For the exact forms of Γ(x), g(x) and c(x), see Lin et al. (2016). Therefore, the score matching estimator is obtained by solving the following linear equation:

In this section, we briefly review the theory of Akaike information criterion. For more detail, see Burnham and Anderson (2002) and Konishi and Kitagawa (2008).

Suppose we have N independent and identically distributed (i.i.d.) samples xN=(x1,⋯,xN) from an unknown distribution q(x). Based on them, we predict the future observation z from q(z) by using a predictive distribution. For this aim, we assume a parametric distribution p(x∣θ) with an unknown parameter θ∈Rk and estimate θ from xN by the maximum likelihood estimator defined as

This Kullback–Leibler divergence is decomposed as

is the Kullback–Leibler discrepancy from the true distribution q(z) to the predictive distribution p(z∣^θMLE(xN)). Here, the first term Eq[logq(z)] in (11) does not depend on ^θMLE(xN). Thus, information criteria are derived as approximately unbiased estimators of the expected Kullback–Leibler discrepancy Ex[dKL(q,^θMLE(xN))], where Ex denotes the expectation with respect to x1,⋯,xN∼q(x).

Let ^q be the empirical distribution of x1,⋯,xN. Then, the quantity

can be considered as an estimator of Ez[dKL(q,^θMLE(xN))]. However, this simple estimator has negative bias, because the maximum likelihood estimate ^θMLE(xN) is defined to minimize dKL(^q,θ):

Therefore, information criteria are derived by correcting this bias.

Consider the asymptotics N→∞. Then, as shown in Burnham and Anderson (2002),

where k×k matrices ^I and ^J are given by

TIC is an approximately unbiased estimator of the expected Kullback–Leibler discrepancy:

Assume that the model includes the true distribution: q(x)=p(x∣θ∗) for some θ∗. Then, both I(θ∗) and J(θ∗) in (14) coincide with the Fisher information matrix and so tr(I(θ∗)J(θ∗)−1)=k. Based on this, Akaike Information Criterion (AIC; Akaike, 1974) is defined as

AIC is an approximately unbiased estimator of the expected Kullback–Leibler discrepancy:

Thus, information criteria enable to compare the goodness of fit of statistical models. Among several candidate models, the model with minimum information criterion is considered to be closest to the true data-generating process. In practice, TIC often suffers from instability caused by estimation errors in ^I and ^J, and so AIC is recommended to use regardless of whether the model is well-specified or not (see Burnham and Anderson, 2002, Section 2.3).

In this section, we derive information criteria for NCE, which we call the Noise Contrastive Information Criterion (NCIC).

To derive the bias correction terms in NCIC, we prepare some lemmata.

and write p∗(x)=p(x∣ξ∗). Note that p∗(x)=q(x) when the model includes the true distribution.

Then, the objective function of NCE is represented as

Following Gutmann and Hyvärinen (2012), we consider the asymptotics under stratified sampling where N→∞, M→∞ and M/N→ν with 0<ν<∞. We denote the expectation with respect to x1,⋯,xN∼q(x) and y1,⋯,yM∼n(y) by Ex,y.

From Theorem 3.2 of Wooldridge (2001), the asymptotic distribution of NCE is

The left hand side of (20) is decomposed as

When the model includes the true distribution (well-specified case), the bias takes a simpler form. Let

is a mixture distribution of p∗ and n.

Assume that the model includes the true distribution: q(x)=p(x∣ξ∗). Then,

where Er denotes the expectation with respect to z∼r(z) in (21).

J(ξ∗), which corresponds to c.

Gutmann and Hyvärinen (2012) pointed out that NCE converges to the maximum likelihood estimator as M/(N+M)→1. In this setting, r(z) converges to n(z) and so Er[b(z)] goes to one. As a result, the coefficient of the leading term in the right hand side of (22) goes to m−1, which is equal to the dimension of the parameter θ.

Mattheou et al. (2009) derived information criteria with the density power divergence based on similar bias calculation. In comparison, the bias term here takes more complicated form because we estimate not only the parameter but also the normalization constant in NCE.

Now, we derive NCIC by using the bias calculation in the previous subsection.

and define m×m matrices ^I and ^J by

From the discussion in Section 3.3 of Wooldridge (2001), ^I and ^J are consistent estimators of I(ξ∗) and J(ξ∗), respectively. Thus, Lemma 1 leads to an information criterion for NCE as follows.

is an approximately unbiased estimator of NEx,y[dNCE(q,^p)]:

When the model includes the true distribution, we can simplify the information criterion by using Lemma 2. Let

Assume that the model includes the true distribution: q(x)=p(x∣ξ∗). Then, the quantity

is an approximately unbiased estimator of NEx,y[dNCE(q,^p)]:

By minimizing NCIC, we can select from non-normalized models (2) estimated by NCE. NCIC1 in (24) and NCIC2 in (26) are viewed as analogues of TIC (15) and AIC (16) for non-normalized models, respectively. As will be shown in Section 7.1, NCIC2 has much smaller variance than NCIC1. Also, NCIC2 is easier to compute than NCIC1. Therefore, NCIC2 is recommended to use when the model is considered to be not badly mis-specified. This situation is quite similar to that of TIC and AIC (see Burnham and Anderson, 2002, Section 2.3).

and write p∗(x)=p(x∣θ∗). Note that p∗(x)=q(x) when the model includes the true distribution. We consider the asymptotics N→∞.

Similarly to dKL(^q,^θMLE(xN)) in Section 4, the quantity ^dSM(^θSM) has negative bias as an estimator of Ex[dSM(q,^p)]. By using a similar argument to Lemma 1, the bias is calculated as follows. Here, ∇θ and ∇2θ denote the gradient and the Hessian with respect to θ, respectively, and Eq and Covq denote the expectation and covariance matrix with respect to z∼q(z).

Since ^I and ^J are consistent estimators of I(θ∗) and J(θ∗), Lemma 3 leads to an information criterion for score matching as follows.

is an approximately unbiased estimator of NEq[dSM(q,^p)]: