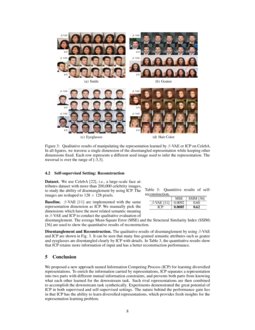 . Notably, a majority of works about representation learning have been studied from the viewpoint of mutual information estimation. For instance, the Information Bottleneck (IB) theory

minimizes the information carried by representations to fit the target outputs, and the generative models such as

In this paper we present a diversified representation learning scheme, termed Information Competing Process (ICP), which handles the above issues through a new information diversifying objective. First, the separated representation parts learned with different constraints are forced to accomplish the downstream task competitively. Then, the rival representation parts are combined to solve the downstream task synergistically. A novel solution is further proposed to optimize the new objective in both supervised and self-supervised learning settings.

We verify the effectiveness of the proposed ICP on both image classification and image reconstruction tasks, where neural networks are used as the feature extractors. In the supervised image classification task, we integrate ICP with four different network architectures (

advocates maximizing mutual information between the inputs and the representations, which forms the basis of independent component analysis

Greff et al. (2017) and Tagger Greff et al. (2016), which uses different representations to group and represent individual entities. The Competitive Collaboration Ranjan et al. (2019) method is the most relevant to our work. It defines a three-player game with two competitors and a moderator, where the moderator takes the role of a critic and the two competitors collaborate to train the moderator. Unlike Competitive Collaboration, the proposed ICP enforces two (or more) parts to be complementary for the same downstream task by a competitive environment, which endows the capability of learning more discriminative and disentangled representations.

The key idea of ICP is depicted in Fig. 1, in which different representation parts compete and collaborate with each other to diversify the information. In this section, we first unify supervised and self-supervised objectives for ICP. A new information diversifying objective is then proposed, and we derive a solution to optimize it.

The information constraining objective in supervised setting has the same form as that of self-supervised setting except the target outputs. We therefore unify these two objectives by using t as the output of the downstream tasks, leading to the unified objective function as:

3.2 Separating and Diversifying the Representations

where θz and θy denote the parameters of representation extractors, α>0 and β>0 are the regularization factors. To ensure that the representations learn diversified information through different constraints, ICP additionally enforces z and y to accomplish the downstream task solely, and prevents z and y from learning what each other learned for the downstream task. This process results in a competitive environment to enrich the information carried by representations. Correspondingly, the information diversifying objective of ICP is concluded as:

To minimize the mutual information between x and z, we can find out a tractable upper bound for the intractable I(z,x). In the existing works Kingma and Welling (2013); Alemi et al. (2017), I(z,x)

Let Q(z) be a variational approximation of P(z), we have:

According to Eq. 5, the trackable upper bound after applying the variational approximation is:

which enforces the extracted z conditioned on x to a predefined distribution Q(z) such as a standard Gaussian distribution.

where D is a discriminator with parameters γ

that outputs an estimation of the probability,

The inference terms in Eq. 3 should be defined as the joint distribution of representation and the output distribution of downstream task solver. We take I(r,t) as an example and expand this mutual information term as:

Let Q(t|r) be a variational approximation of P(t|r), we have:

By applying the variational approximation, the trackable lower bound of the mutual information between r and t is:

Based on the above formulation, we derive different objectives for the supervised and self-supervised settings in what follows.

Supervised Setting. In the supervised setting, t represents the known target labels. By assuming that the representation r is not dependent on the label t, i.e., P(r|x,t)=P(r|x), we have:

Accordingly, the joint distribution of r and t can be written as:

Combining Eq. 11 with Eq. 13, we get the lower bound of the inference term in the supervised setting:

Since the conditional probability P(t|x) represents the distribution of labels in the supervised setting, Eq. 14 is actually the cross entropy loss for classification.

Assuming Q(t|r) as a Gaussian distribution, Eq. 15 can be expanded as the L2 reconstruction loss for the input x.

To diversify the information and prevent the dominance of one representation part, we constrain the mutual information between z and y, which equals to make z and y be independent with each other. Inspired by Schmidhuber (1992); Li et al. (2019), we introduce a predictor H parameterized by ψ to fulfill this goal. Concretely, we let H predict y conditioned on z, and prevent the extractor from producing z which can predict y. The same operation is conducted on y to z. The corresponding objective is:

So far, we have all the tractable bounds and alternatives for optimizing the information diversifying objective of ICP. The optimization process is summarized in Alg. 1.

In experiments, all the probabilistic feature extractors, task solvers, predictor and discriminator are implemented by neural networks. We suppose Q(z),Q(t|r),Q(t|z),Q(t|y) are standard Gaussian distributions and use reparameterization trick by following VAE Kingma and Welling (2013)

Dataset. CIFAR-10 and CIFAR-100 Krizhevsky and Hinton (2009) are used to evaluate the performance of ICP in the image classification task. These datasets contain natural images belonging to 10 and 100 classes respectively. CIFAR-100 comes with “finer” labels than CIFAR-10. The raw images are with 32 ×

32 pixels and we normalize them using the channel means and standard deviations. Standard data augmentation by random cropping and mirroring is applied to the training set.

Backbone Networks. We utilize four architectures including VGGNet Simonyan and Zisserman (2014), GoogLeNet Szegedy et al. (2015, 2016), ResNet He et al. (2016), and DenseNet Huang et al. (2017) to test the general applicability of ICP and to study the diversified representations learned by ICP.

Baselines. We use the classification results of original network architectures as baselines. The deep Variational Information Bottleneck (VIB) Alemi et al. (2017) and global version of Deep InfoMax with one additional mutual maximization term (DIM*) Hjelm et al. (2019) are used as references. To make a fair comparison, we expand the representation dimension of both methods to the same size of ICP’s (denoted as VIB×2, and DIM*×2). For the ablation study, we implement ICP by combining two representation parts simply, or combining two representation parts learned with different constraints but do not make them independent with each other (i.e., optimize Eq. 2). The former implementation is denoted as ICP-ALL and the latter is denoted as ICP-COM.

Classification Performance. The classification error rates on CIFAR-10 and CIFAR-100 are shown in Tables 1 and 2. The preformance of ICP-ALL shows that simply combining two representation parts is sub-optimal, except for ResNet20. By adding the constraints on the representations, the performance of ICP-COM is almost the same as the baselines. The VIB, DIM*, VIB×2 and DIM*×2 can be regarded as the methods that only use one type of constraints in ICP. These methods still do not achieve satisfactory results. Only ICP generalizes to all these architectures and reports the best performance. In addition, the results on CIFAR-10 and CIFAR-100 suggest that ICP works well on the finer labeled dataset (i.e., CIFAR-100). We attribute the success to the diversified representations that capture more detailed information of inputs.

Dataset. We use CelebA Liu et al. (2015), i.e., a large-scale face attributes dataset with more than 200,000 celebrity images, to study the ability of disentanglement by using ICP. The images are reshaped to 128 × 128 pixels.

Baseline. β-VAE Higgins et al. (2017) are implemented with the same representation dimension as ICP. We manually pick the dimensions which have the most related semantic meaning in β-VAE and ICP to conduct the qualitative evaluation of disentanglement. The average Mean Square Error (MSE) and the Structural Similarity Index (SSIM) Wang et al. (2004) are used to show the quantitative results of reconstruction.

Disentanglement and Reconstruction. The qualitative results of disentanglement by using β-VAE and ICP are shown in Fig. 3. It can be seen that many fine-grained semantic attributes such as goatee and eyeglasses are disentangled clearly by ICP with details. In Table 3, the quantitative results show that ICP retains more information of input and has a better reconstruction performance.