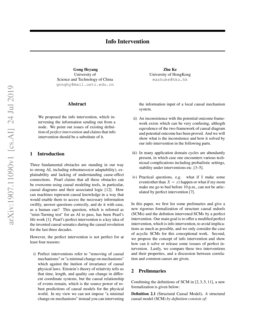 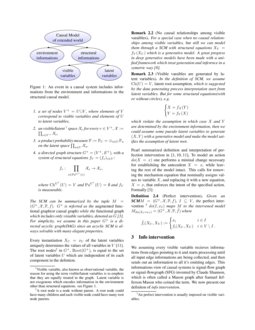 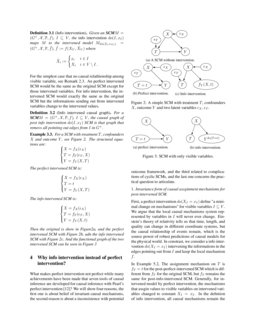 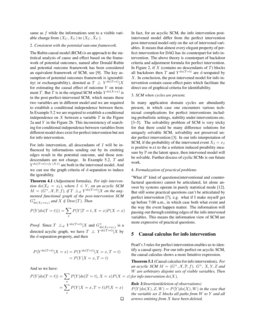 How to Account for Alternatives When Comparing Effects: Revisiting 'Bringing Education to Afghan Girls'

All in one stroke? Intervention Spaces for Dark Patterns

PATHoBot: A Robot for Glasshouse Crop Phenotyping and Intervention

Three fundamental obstacles are standing in our way to strong AI, including robustnesss(or adaptability), explainability and lacking of understanding cause-effect connections. Pearl claims that all these obstacles can be overcome using causal modeling tools, in particular, causal diagrams and their associated logic[12]. How can machines represent causal knowledge in a way that would enable them to access the necessary information swiftly, answer questions correctly, and do it with ease, as a human can? This question, which is referred as "mini-Turning test" for an AI to pass, has been Pearl’s life work[1]. Pearl’s perfect intervention is a key idea of the invented causal sematics during the causal revolution for the last three decades.

However, the perfect intervention is not perfect for at least four reasons:

In this paper, we first list some prelimaries and give a new rigorous formalization of structure causal mdoels (SCMs) and the defintion intervened SCMs by a perfect intervention. Our main goal is to offer a modified perfect intervention, which is info intervention, to avoid implications as much as possible, and we only consider the case of acyclic SCMs for this conceptional work. Second, we propose the concept of info intervention and show how can it solve or release some isssues of perfect intervenion. Lastly, we compare these two interventions and their properties, and a discussion between correlation and common causes are given.

A structural causal model (SCM) by definition consists of:

The SCM can be summarized by the tuple M=(G+,X,P,f). G+ is referred as the augmented functional graph(or causal graph) while the functional graph which includes only visiable variables, denoted as G[3]. For simplicity, we assume in this paper G+ is a directed acyclic graph(DAG) since an acyclic SCM is always solvable with many elegant properties.

For a special case when no causal relationships among visible variables, but still we can model them through a SCM with structural equations XV=fV(XU) which is a generative model. A great progress in deep generative models have been made with a unified framework which treat generation and inference in a symetric way [8].

In the definition of SCM, we assume Ch(U)=V, latent root assumption, which is suggested by the data generating process interpretation start from latent variables. But for some structural equations(with or without circles), e.g.

which violate the assumption in which case X and Y are determined by the environment information, then we could assume some puesdo latent variables to generate (X,Y) with a generative model and make the model satifies the assumption of latent root.

Pearl summarized definition and interpretation of perfection intervention in [11, 1, 10], To model an action do(X=x) one performs a mininal change necessary for establishiing the antecedent X=x, while leaving the rest of the model intact. This calls for removing the mechanism equation that nominally assigns values to variable X, and replacing it with a new equation, X=x, that enforces the intent of the specified action. Formally [3]:

We assuming every visible variable recieves informations from edges pointing to it and starts processing until all input edge informations are being collected, and then sends out an information to all it’s emitting edges. This informations view of causal systems is signal-flow graph or signal-flowgraph (SFG) invented by Claude Shannon, which is often called a Mason graph after Samuel Jefferson Mason who coined the term. We now present our definiton of info intervention.

For a SCMM=(G+,X,P,f), I⊆V, the causal graph of post info intervention do(I,xI) SCM is that graph that removs all pointing out edges from I in G+.

For a SCM with treatment T, confounders X and outcome Y, see Figure 2. The structural equations are:

The perfect intervened SCM is:

The info intervened SCM is:

What makes perfect intervention not perfect while many achievements have been made that seven tools of causal inference are developed for causal inference with Pearl’s perfect intervention [12]? We will show four reasons, the first one is about belief of invariant causal mechanisms, the second reason is about a inconsistence with potential outcome framework, and the third related to complications of cyclic SCMs, and the last one concerns the practical question to articulate.

First, a perfect intervention do(XI=xI) define "a minimal change on mechanisms" for visible variables I⊆V. We argue that the local causal mechanisms system represented by variables in I will never ever change. Einstein’s theory of relativity tells us that time, length, and quality can change in different coordinate systems, but the causal relationship of events remain, which is the source power of robust predictions of causal models for the physical world. In constrast, we consider a info intervention do(XI=xI) intervening the informations in the edges pointing out from I and keep the local mechanism f.

In Example 5.2, The assignment mechanism on T is fT=t for the post-perfect-intervened SCM which is different from fT for the original SCM, but fT remains the same for post-info-intervened SCM. Generally, for intervened model by perfect intervention, the mechanisms that assgin values to visible variables on intervened variables changed to constant XI=xI. In the defintion of info intervention, all causal mechanisms remain the same as f while the informations sent to a visible variable change from (XU,XV) to (XU,~XV).

2. Consistent with the potential outcome framework.

for estimating the causal effect of outcome

For info intervention, all descendants of I will be influenced by informations sending out by its emitting edges result in the potential outcome, and those non-descendants are not change. In Example 5.2, T and Ydo(T=t)=fY(X,t) are both in the intervened model. And we can use the graph criteria of d-separation to induce the igorability.

And so we have:

3. SCM when cycles are present.

In many application domain cycles are abundantly present, in which case one encounters various technicual complications for perfect interventions including probailistic settings, stability under interventions etc. [3, 5, 4]. The solvability problem of SCM is very tricky for that there could be many difference solutions for uniquely solvable SCM, solvability not preserved under perfect intervention[3]. In our info interpretation of SCM, if the probability of the intervened event XI=xI is positive w.r.t to the a solution induced proability measure by P on the latent space, then intervened model will be solvable. Further discuss of cyclic SCMs is our future work.

"What if" kind of questions(interventional and counterfactural questions) cannot be articulated, let alone answer by systems operate in purely statistical mode [12]. But still some practical questions can’t be articulated by perfect intervention[7], e.g. what if I make myself get up before 7:00 a.m., in which case both what event and the way the event happen matter. The information will passing out through emitting edges of the info intervened variables. This means the information view of SCM are more expressive of practical questions.

Pearl’s 3 rules for perfect intervention enables us to identify a causal query. For our info perfect on acyclic SCM, the causal calculus shows a more Intuitive expression.

For an acyclic SCM M=(G+,X,P,f). G+, X,Y,Z and W are arbitratry disjoint sets of visible variables, Then for info intervention do(X),

Rule 1(Insertion/deletion of observations) P(Y|do(X),Z,W)=P(Y|do(X),W) in the case that the variable set Z blocks all paths from W to Y and all arrows emitting from X have been deleted.

Rule 2(Action/observation exchange) P(Y|do(X),Z)=P(Y|X,Z) in the case that the variable set Z satisfies the back-door criterion.

Rule 3(Insertion/deletion of actions) P(Y|do(X))=P(Y) in the case where no causal paths connect X and Y.

Gdo(X)=G¯X is the graph removing all emitting edges from X of G+.

For rule 1, Z blocks all paths from W to Y and all arrows emitting from X have been deleted, so (Y⊥⊥dZ|W)Gdo(X), for the definition of conditional independence:

For rule 2. the variable set Z satisfies the back-door criterion, then we have (Y⊥⊥dX|Z)Gdo(X), then,

For rule 3, Y is not a descendant of X, which means it cannot accept any information on the pointing out edges of X, obviously P(Y|do(X))=P(Y). ∎

d-separation is a convienient graphical rule for inducing conditional independence, now we have to point out that it only leads to a sufficient set for controlling but not a necessary set. For a simplest example,

For a SCM with treatment T, confounders X and outcome Y, see Figure 4. The structural equations are:

Obviously, T⊥⊥dY|X, suggests that we should controll for X. Actually we could have the independence between T and Y without conditioning on X for some special function and probability measure on the latent space. In particular, for any two independent non-zero proability events A and B in the generated information field of X, let fT=IB(x) and fY=IA(x), then T⊥⊥Y.

Our formalization of SCM and defintion of info intervention follow the philosophy:

In summary, Pearl’s perfect intervention is not perfect for serveral reasons, we often an option of info intervention to formulate the causal sematics which owns several advantages.