Infinite Diameter Confidence Sets in a Model for Publication Bias 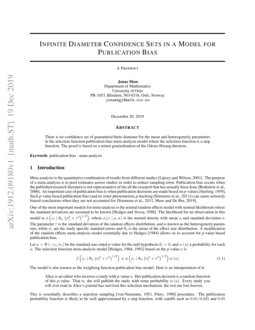 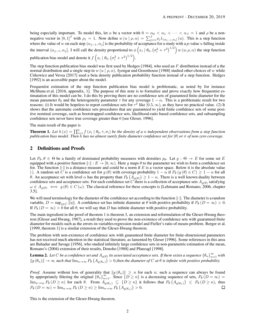 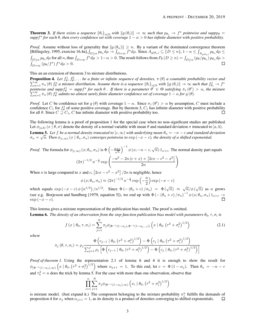 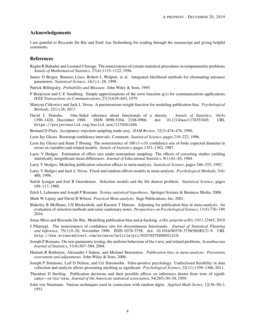 . The purpose of a meta-analysis is to pool estimates across studies in order to reduce sampling error. Publication bias occurs when the published research literature is not representative of the all the research that has actually been done

(hedges1998fixed). The likelihood for an observation in this model is ϕ(xi∣θ0,(σ2i+τ2)1/2), where ϕ(x∣μ,σ) is the normal density with mean μ and standard deviation σ. The parameter τ is the standard deviation of the random effects distribution, and is known as the heterogeneity parameter, while σi

are the study specific standard errors and

θ0 is the mean of the effect size distribution. A modification of the random effects meta-analysis model essentially due to hedges1984estimation allows us to account for p-value based publication bias.

-value for the null hypothesis

a probability for each

u. The selection function meta-analysis model (hedges1984estimation; hedges1992modeling) based on the p-value u is

The model is also known as the weighting function publication bias model. Here is an interpretation of it:

Alice is an editor who receives a study with p-value u. Her publication decision is a random function of this p-value. That is, she will publish the study with some probability w(u). Every study you will ever read in Alice’s journal has survived this selection mechanism, the rest are lost forever.

This is essentially describes a rejection sampling (von1951various; flury1990acceptance) procedure. The publication probability function is likely to be well approximated by a step function, with cutoffs such as 0.01,0.025 and 0.05 being especially important. To model this, let α

be a vector with

The step function publication bias model was first used by hedges1984estimation, who used an F

w(u∣ρ,α). iyengar1988selection studied other choices of w while citkowicz2017parsimonious used a beta density publication probability function instead of a step function. hedges1992modeling is an accessible paper about the model.

The main result of the paper is

Let h(x)=∏ni=1f(xi∣θ0,τ,σi) be the density of a n independent observations from a step function publication bias model. Then h has no almost surely finite diameter confidence set for |θ| or σ of non-zero coverage.

Let Pθ,θ∈Θ be a family of dominated probability measures with densities pθ. Let g:Θ→E for some set E equipped with a positive function ∥⋅∥:E→[0,∞). Here g maps θ to the parameter we wish to form a confidence set for. The function ∥⋅∥ is a distance measure and could be a norm if E is a vector space. Below it is the absolute value |⋅|. A random set C is a confidence set for g(θ) with coverage probability 1−α if Pθ(g(θ)∈C)≥1−α for all θ. An acceptance set with level α has the property than Pθ(Ag(θ))≥1−α. There is a well known duality between confidence sets and acceptance sets: For each confidence set C there is a collection of acceptance sets Ag(θ) satisfying ω∈Ag(θ)⟺g(θ)∈C(ω). The classical reference for these concepts is (lehmann2006testing, chapter 3.5).

. The diameter is a random variable,

The main ingredient in the proof of theorem 1 is theorem 3, an extension and reformulation of the Gleser-Hwang theorem (gleser1987nonexistence), a result they used to prove the non-existence of confidence sets with guaranteed finite diameter for models such as the errors-in-variables regression model and Fieller’s ratio of means problem. berger1999integrated is a similar extension of the Gleser-Hwang theorem.

The problem with non-existence of confidence sets with guaranteed finite diameter for finite-dimensional parameters has not received much attention in the statistical literature, as lamented by gleser996bootstrap. Some references in this area are bahadur1956nonexistence, who studied infinitely large confidence sets in non-parametric estimation of the mean, romano2004non’s (2004) extension of their results, Donoho1988-hg and Pfanzagl1998-fe.

Let C be a confidence set and Ag(θ) its associated acceptance sets. If there exists a sequence {θn}∞n=1 with ∥g(θn)∥→∞ such that limn→∞Pθ(Ag(θn))>0,then the diameter of C at θ is infinite with positive probability.

Assume without loss of generality that ∥g(θn)∥≥n for each n; such a sequence can always be found by appropriately filtering the original {θn}∞n=1. Since {D≥n} is a decreasing sequence of sets, Pθ(D=∞)=limn→∞Pθ(D≥n) for each θ. From Ag(θn)⊆{D≥n} it follows that Pθ(Ag(θn))≤Pθ(D≥n), thus . ∎

This is the extension of the Gleser-Hwang theorem.

If there exists a sequence {θi}i∈N with ∥g(θi)∥→∞ such that pθi→f⋆ pointwise and supppθ=suppf⋆ for each θ, then every confidence set with coverage 1−α>0 has infinite diameter with positive probability.

This an an extension of theorem 3 to mixture distributions.

Let f1θ,f2θ,… be a finite or infinite sequence of densities, π(θ) a countable probability vector and ∑∞n=1πn(θ)fnθ a mixture distribution. Assume there is a sequence {θi}i∈N with ∥g(θi)∥→∞ such that f1θi→f⋆ pointwise and suppf1θ=suppf⋆ for each θ . If there is a parameter θ′∈Θ satisfying π1(θ′)>α, the mixture ∑∞n=1πn(θ)fnθ admits no almost surely finite diameter confidence set of coverage 1−α for g(θ).

The following lemma is a proof of proposition 1 for the special case when no non-significant studies are published. Let ϕ[a,b)(x∣θ,σ) denote the density of a normal variable with mean θ and standard deviation σ truncated to [a,b).

Let f be a normal density truncated to [c,∞) with underlying mean θn=−n−c and standard deviation σn=√n. Then ϕ[c,∞)(x∣θn,σn) converges pointwise to exp(−x−c), the density of a shifted exponential.

This lemma gives a mixture representation of the publication bias model. The proof is omitted.

The density of an observation from the step function publication bias model with parameters θ0,τ,σi is

is mixture model. (Just expand it.) The component belonging to the mixture probability πnj fulfills the demands of proposition 4 for αj when αj+1=1, as its density is a product of densities converging to shifted exponentials. ∎

I am grateful to Riccardo De Bin and Emil Aas Stoltenberg for reading through the manuscript and giving helpful comments.