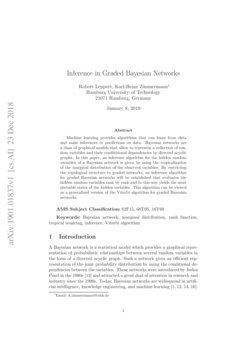 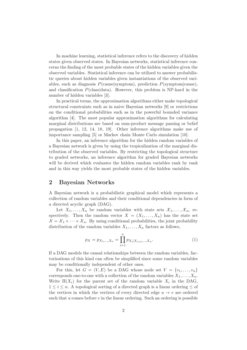 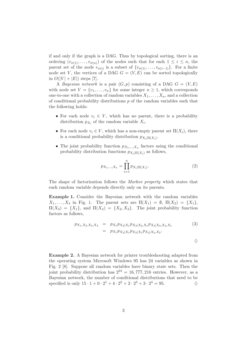 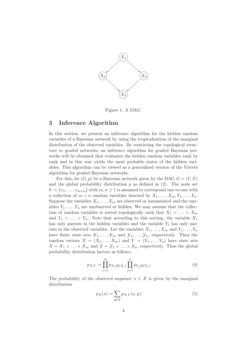 Bayesian networks have been used as a mechanism to represent the joint d...
Wanchuang Zhu, et al. ∙

A Probabilistic Network of Predicates

On the Geometry of Bayesian Graphical Models with Hidden Variables

In this paper we investigate the geometry of the likelihood of the unkno...
Raffaella Settimi, et al. ∙

A Bayesian network is a statistical model which provides a graphical representation of probabilistic relationships between several random variables in the form of a directed acyclic graph. Such a network gives an efficient representation of the joint probability distribution by using the conditional dependencies between the variables. These networks were introduced by Judea Pearl in the 1980s

and attracted a great deal of attention in research and industry since the 1990s. Today, Bayesian networks are widespread in artificial intelligence, knowledge engineering, and machine learning

In practical terms, the approximation algorithms either make topological structural constraints such as in naive Bayesian networks [9]

[4]. The most popular approximation algorithms for calculating marginal distributions are based on sum-product message passing or belief propagation [1, 12, 14, 18, 19]. Other inference algorithms make use of importance sampling [5]

In this paper, an inference algorithm for the hidden random variables of a Bayesian network is given by using the tropicalization of the marginal distribution of the observed variables. By restricting the topological structure to graded networks, an inference algorithm for graded Bayesian networks will be derived which evaluates the hidden random variables rank by rank and in this way yields the most probable states of the hidden variables.

A Bayesian network is a probabilistic graphical model which represents a collection of random variables and their conditional dependencies in form of a directed acyclic graph (DAG).

, respectively. Then the random vector

X=(X1,…,Xn) has the state set X=X1×⋯×Xn. By using conditional probabilities, the joint probability distribution of the random variables X1,…,Xn factors as follows,

If a DAG models the causal relationships between the random variables, factorizations of this kind can often be simplified since some random variables may be conditionally independent of other ones.

For this, let G=(V,E) be a DAG whose node set V={v1,…,vn} corresponds one-to-one with a collection of the random variables X1,…,Xn. Write Π(Xi) for the parent set of the random variable Xi in the DAG, 1≤i≤n. A topological sorting of a directed graph is a linear ordering ≤ of the vertices in which the vertices of every directed edge u→v are ordered such that u comes before v in the linear ordering. Such an ordering is possible if and only if the graph is a DAG. Thus by topological sorting, there is an ordering (vσ(1),…,vσ(n)) of the nodes such that for each 1≤i≤n, the parent set of the node vσ(i) is a subset of {vσ(1),…,vσ(i−1)}. For a finite node set V, the vertices of a DAG G=(V,E) can be sorted topologically in O(|V|+|E|) steps [7].

A Bayesian network is a pair (G,p) consisting of a DAG G=(V,E) with node set V={v1,…,vn} for some integer n≥1, which corresponds one-to-one with a collection of random variables X1,…,Xn

, and a collection of conditional probability distributions

p of the random variables such that the following holds:

The shape of factorization follows the Markov property which states that each random variable depends directly only on its parents.

For this, let (G,p) be a Bayesian network given by the DAG G=(V,E) and the global probability distribution p as defined in (2). The node set V={v1,…,vm+n} with m,n≥1 is assumed to correspond one-to-one with a collection of m+n random variables denoted by X1,…,Xm,Y1,…,Yn. Suppose the variables X1,…,Xm are observed or instantiated and the variables Y1,…,Yn are unobserved or hidden. We may assume that the collection of random variables is sorted topologically such that X1>…>Xm and Y1>…>Yn. Note that according to this sorting, the variable X1 has only parents in the hidden variables and the variable Y1 has only parents in the observed variables. Let the variables X1,…,Xm and Y1,…,Yn have finite state sets X1,…,Xm and Y1,…,Yn, respectively. Then the random vectors X=(X1,…,Xm) and Y=(Y1,…,Yn) have state sets X=X1×…×Xm and Y=Y1×…×Yn, respectively. Thus the global probability distribution factors as follows,

Furthermore, each observed variable Z is given the largest semi-rank of its hidden parents,

The reason is that the conditional probability pZ|Π(Z) of observed variable Z with given value Z=z can be evaluated as soon as the parents are instantiated (Ex. 3).

Then by the semi-ranks of the nodes, the marginal distribution (5) can be written according to the following sum-product decomposition,

where ρ=ρmax and the arguments of the conditional probabilities have been omitted for readability. This decomposition is sound, since the computation in the r-th bracket corresponding to the collections of variables X(r)i and Y(r)j of semi-rank r depends on the parent nodes which are of lower semi-rank.

A semiring is an algebraic structure similar to a ring, but without the requirement that each element must have an additive inverse. More specifically, a semiring is a non-empty set R together with two binary operations, called addition + and multiplication ⋅, such that (R,+) is a commutative monoid with identity element 0, (R,⋅) is a monoid with identity element 1, the multiplication distributes over addition, i.e., for all a,b,c∈R,

The set R∪{∞} together with the operations

with x+∞=∞ for all x∈R∪{∞} forms an idempotent commutative semiring with additive identity ∞ and multiplicative identity 0. Note that additive and multiplicative inverses may not exist in a semiring. For instance, the equations 1⊕x=2 and ∞⊙x=1 have no solutions x∈R∪{∞}. This semiring is known as tropical semiring. The attribute ”tropical” was coined by French scholars (1998) in honor of the Brazilian mathematician Imre Simon who studied the tropical semiring in the early 1960s.

The mapping ϕ is the tropicalization of the ordinary semiring (R≥0,+,⋅). In this way, large values (probabilities) are mapped to small values (weights) and vice versa.

Given an observed sequence x∈X, the objective is to find one (or all) sequences y∈Y with maximum likelihood

Since the observed sequence x is fixed, the likelihood pY|X(y∣x) is directly proportional to the joint probability pX,Y(x,y) provided that pX(x)>0. Suppose that pX(x)>0. Then the aim is to find one (or all) sequences ¯y∈Y with the property

Each optimal sequence ¯y is called an explanation of the given sequence x. The explanations can be found by tropicalization. For this, put wX,Y(x,y)=−logpX,Y(x,y) and wX(x)=−logpX(x) for all x∈X and y∈Y. Then the tropicalization yields

The explanations ¯y can be obtained by evaluation in the tropical semiring,

where ρ=ρmax and the arguments of the weights have been omitted for readability. This yields the following result.

Let x∈X. The tropicalization wX(x) of the marginal probability pX(x) provides the explanations of the sequence x.

However, the tropicalization of the marginal probability does not overcome the NP-hardness of the inference problem. Our aim is to provide an easily structured inference algorithm for a class of topologically constrained Bayesian networks which emerge quite naturally in practice.

the terms wX(r)i|Π(X(r)i) and wY(r)j|Π(Y(r)j) depend only on the parent values y′∈D(r−1) of the hidden variables of previous rank r−1. In this way, the evalution of the expression wX(x) has a simple bookkeeping structure (Alg. 1). By the gradedness of the nodes, the hidden parents of each hidden variable Y with rank r=ρ(Y)≥1 all have rank r−1 and so the computation of array element A[r,y] with rank r and y∈D(r) requires only the array elements A[r−1,y′] with y′∈D(r−1) of the previous rank.

The algorithm follows the principle of dynamic programming [2] and consists of a forward algorithm evaluating the tropicalized expression wX(x) and a backward algorithm which provides one or all explanations of the collection of hidden variables. The latter is achieved by recording in each step r all state values in D(r) which attain the minimum in the minimization step, 0≤r≤ρmax. This information can already be recorded by the forward algorithm. Then the trace back of all optimal decisions made in each step can provide all explanations. The forward algorithm evaluates the expression (3) by using an array A such that the array entries A[r,y] with y∈D(r) record all decisions made up to the variables of rank r.

The complexity of the evaluation of the tropicalized term wX(x) depends on the underlying DAG. The array A has size ∑ρmaxr=0|D(r)| and the computation of array element A[r,y] requires O(|D(r−1)|⋅(sr+tr)) steps. Suppose all state sets have l elements. Then we have D(r)=ltr for all 0≤r≤ρmax.

In the best case, the hidden random variables all have the same rank and common observed ascendants. Then ρmax=0. In view of the graded DAG in Fig. 5, the random variables have ranks ρ(X1)=ρ(Y1)=…=ρ(Yn)=0. Since the minimization is decoupled, the inference algorithm has time complexity O(ln) and computes for each observed value x1∈X1 the following,

The array has size n⋅l and the computation of each array element requires O(l) steps. Hence, the time complexity is O(l2n). Note that the Bayesian networks for the hidden tree Markov model [6] and stochastic automata [21] are graded as well and their inference algorithms have both the same time complexity O(l2n).

In the worst case, the hidden random variables have the same rank and common observed descendants. Then ρmax=0. In view of the graded DAG in Fig. 7, the random variables have ranks ρ(Y1)=…=ρ(Yn)=ρ(X1)=0. Since the minimization is fully coupled, the inference algorithm has time complexity O(lnn) and computes for each observed value x1∈X1 the following,

Finally, note that in a Bayesian network with a non-graded structure the inference algorithm given by the evaluation of the expression wX(x) has generally a more complex bookkeeping structure for the computation of the expression (22), since it requires to resort on values of hidden variables with arbitrarily small semi-rank (Fig. 3). The corresponding data structure (array) A holding these values will be rather intricate and meander-shaped.