We investigate infection-curing games on a network epidemics model based on the classical Polya urn scheme that accounts for spatial contagion among neighbouring nodes. We first consider the zero-sum game between competing agents using the cost measure for the average infection in the network. Due to the complexity of this problem we define a game on a proxy measure given by the so-called expected network exposure, and prove the existence of a Nash equilibrium that can be determined numerically using gradient descent algorithms. Finally, a number of simulations are performed on small test networks to provide empirical evidence that a Nash equilibrium exists for games defined on the average network infection. 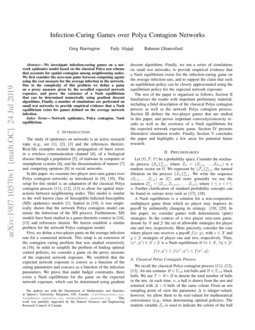 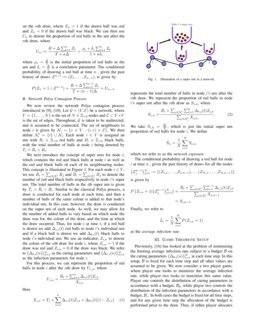 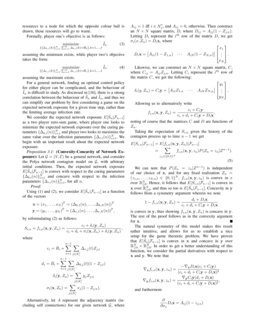 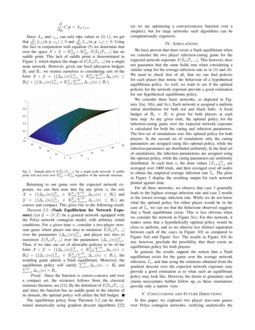 Evolution toward a Nash equilibrium

In this paper, we study the dynamic behavior of Hedge, a well-known algo...
Ioannis Avramopoulos, et al. ∙

A dynamic that evolves toward a Nash equilibrium

Dynamic Games of Social Distancing during an Epidemic: Analysis of Asymmetric Solutions

The study of epidemics on networks is an active research topic (e.g., see [1, 2, 3] and the references therein). Real-life examples include the propagation of burst errors in a wireless communication channel [4], of a biological disease through a population [5], of malware in computer or smartphone systems [6], and the dissemination of rumors [7] and competing opinions [8] in social networks.

In this paper, we examine two player zero-sum games over Polya contagion networks as introduced in [9, 10]. The setup for this model is an adaptation of the classical Polya contagion process [11, 12, 13] to allow for spatial interactions between neighbouring nodes. This model is similar to the well known class of Susceptible-Infected-Susceptible (SIS) epidemics models [1]. Indeed in [10], it was empirically shown that the network Polya contagion model can mimic the behaviour of the SIS process. Furthermore, SIS models have been studied in a game-theoretic context in [14, 15] and references therein. We herein establish a similar problem for the network Polya contagion model.

The rest of the paper is organized as follows. Section II familiarizes the reader with important preliminary material, including a brief description of the classical Polya contagion process as well as the network Polya contagion process. Section III defines the two-player games that are studied in this paper, and proves important convexity/concavity results as well as the existence of a Nash equilibrium for the expected network exposure game. Section IV presents illustrative simulation results. Finally, Section V concludes the paper and highlights a few areas for potential future research.

be a probability space. Consider the stochastic process

is a random vector on

A Nash equilibrium is a solution for a non-cooperative multiplayer game from which no player may improve its payoff by unilaterally changing its strategy  [19, 20]. In this paper, we consider games with deterministic (pure) strategies. In the context of a two player zero-sum game, denote by X and Y the set of allowable strategies for player one and two, respectively. More precisely, consider the case where player one receives a payoff f(x,y), with x∈X and y∈Y strategies of player one and two, respectively. Then, (x∗,y∗)∈X×Y is a Nash equilibrium if ∀x∈X, ∀y∈Y:

We recall the classical Polya contagion process [11, 12, 13]. An urn contains R∈Z>0 red balls and B∈Z>0 black balls. We use T=R+B to denote the total number of balls in the urn. At each time, n, a ball is drawn from the urn and returned with Δ>0 balls of the same colour. From an urn sampling point of view the parameter Δ

is integer-valued; however, we allow them to be real-valued for mathematical convenience (e.g., when determining optimal policies). The random variable

where ρc=RT is the initial proportion of red balls in the urn and δc=ΔT is a correlation parameter. The conditional probability of drawing a red ball at time n , given the past history of draws Zn−1:=(Z1,…,Zn−1), is given by

We now review the network Polya contagion process introduced in [9, 10]. Let G=(V,E) be a network, where V={1,…,N} is the set of N∈Z>0 nodes and E⊂V×V is the set of edges. Throughout, G is taken to be undirected, and is assumed to be connected. The set of neighbours to node i is given by Ni={v∈V:(i,v)∈E}. We then define N′i={i}∪Ni. Each node i∈V is assigned an urn with Ri∈Z>0 red balls and Bi∈Z>0 black balls, with the total number of balls at node i being denoted by Ti=Ri+Bi.

We next introduce the concept of super urns for node i, which contains the red and black balls at node i as well as the red and black balls of each of its neighbouring nodes. This concept is illustrated in Figure 1. For each node i∈V, we use ¯Ri=∑j∈N′iRj and ¯Bi=∑j∈N′iBj to denote the number of red and black balls respectively in node i’s super urn. The total number of balls in the ith super urn is given by ¯Ti=¯Ri+¯Bi. Similar to the classical Polya process, a draw is conducted for each node at each time, and then a number of balls of the same colour is added to that node’s individual urn. In this case, however, the draw is conducted on the super urn of each node. As well, we may allow for the number of added balls to vary based on which node the draw was for, the colour of the draw, and the time at which the draw occurred. Thus, for node i at time t, if a red ball is drawn we add Δr,i(t) red balls to node i’s individual urn and if a black ball is drawn we add Δb,i(t) black balls to node i’s individual urn. We use an indicator, Zi,n to denote the colour of the nth draw for node i, where Zi,n=1 if the draw was red and Zi,n=0 if the draw was black. We refer to {Δb,i(n)}∞n=1 as the curing parameters and {Δr,i(n)}∞n=1 as the infection parameters for node i.

For this process, we can represent the proportion of red balls in node i after the nth draw by Ui,n, where

We take Si,0=¯Ri¯Ti, which is just the initial super urn proportion of red balls for node i. We define

which we refer to as the network exposure.

The conditional probability of drawing a red ball for node i at time n , given the past history of draws for all the nodes

Finally, we refer to

as the average infection rate.

Previously, [16] has looked at the problem of minimizing the limiting average infection rate subject to a budget B on the curing parameters {Δb,i(n)}Ni=1 at each time step. In this setup, B is fixed for each time step and all other values are assumed to be given. We now consider a two player game, where player one looks to minimize the average infection rate, while player two looks to maximize this same value. Player one controls the distribution of curing parameters in accordance with a budget, Bb, while player two controls the distribution of the infection parameters in accordance with a budget, Br. In both cases the budget is fixed for all time steps, and for any given time step the allocation of the budget is performed prior to the draw. Thus, if either player allocates resources to a node for which the opposite colour ball is drawn, those resources will go to waste.

For a general network, finding an optimal control policy for either player can be complicated, and the behaviour of ~In is difficult to study. As discussed in [16], there is a strong correlation between the behaviour of ~Sn and ~In, and thus we can simplify our problem by first considering a game on the expected network exposure for a given time step, rather than the limiting average infection rate.

by reformulating (2) as follows:

Alternatively, let A represent the adjacency matrix (including self connections) for our given network G, where Aij=1 iff i∈N′j, and Aij=0, otherwise. Then construct an N×N square matrix, D, where Dij=Aij(1−Zj,n). Letting Di represent the ith row of the matrix D, we get σi(x,Zn)=Dix, where

Likewise, we can construct an N×N square matrix, C, where Cij=AijZj,n. Letting Ci represent the ith row of the matrix C, we get the following:

Allowing us to alternatively write

noting of course that the matrices C and D are functions of Zn.

Taking the expectation of Si,n given the history of the contagion process up to time n−1 we get

is convex in y, thus showing fi,n(x,y,Zn) is concave in y. The rest of the proof follows as in the convexity argument for x.

The natural symmetry of this model makes this result rather intuitive, and allows for us to establish a nice setup for the game theoretic problem. We have proven that E[~Sn|Fn−1] is convex in x and concave in y over RN≥0×RN≥0. In order to get a better understanding of this function, we consider the partial derivatives with respect to x and y. We note that

(Nash Equilibrium for Network Exposure): Let G=(V,E) be a general network equipped with the Polya network contagion model, with arbitrary initial conditions. For a given time n, consider a two-player zero-sum game where player one tries to minimize E[~Sn|Fn−1] over the parameters {Δb,i(n)}Ni=1 and player two tries to maximize E[~Sn|Fn−1] over the parameters {Δr,i(n)}Ni=1. Then, if we take our set of allowable policies to be of the form X×Y={{Δb,i(n)}Ni=1∈RN≥0|∑Ni=1Δb,i(n)≤Bb}×{{Δr,i(n)}Ni=1∈RN≥0|∑Ni=1Δr,i(n)≤Br}, the resulting game admits a Nash equilibrium. Moreover, the equilibrium policy will satisfy ∑Ni=1Δb,i(n)=Bb and ∑Ni=1Δr,i(n)=Br.

Since the function is convex-concave and over a compact set, the existence follows from the classical minimax theorem, see [21]. By the definition of E[~Sn|Fn−1], and since the function has no saddle point in the interior of its domain, the optimal policy will utilize the full budget.

The equilibrium policy from Theorem III.2 can be determined numerically using gradient descent algorithms [22] (as we are optimizing a convex/concave function over a simplex), but for large networks such algorithms can be computationally expensive.

We have proven that there exists a Nash equilibrium when we consider the two player infection-curing game for the expected network exposure E[~Sn|Fn−1]. This however, does not guarantee that the same holds true when considering a similar setup for the average infection rate as in (3) and (4

We consider three basic networks, as depicted in Figures 3(a), 3(b), and 3(c). Each network is assigned a uniform initial distribution for both red and black balls. A fixed budget of Bb=Br

n, the draw values {Zi,n}Ni=1 are averaged over 1000 trials, and then averaged over all nodes to obtain the empirical average infection rate ~In. The plots in Figure 3 display the resulting output for each network plotted against time.

For all three networks, we observe that case 3 generally leads to the highest average infection rate and case 2 results in the lowest average infection rate. While we do not know what the optimal policy for either player would be in the case of ~In, we can see that the behaviour observed suggests that a Nash equilibrium exists. This is less obvious when we consider the network in Figure 3(c). For this network, it makes sense that a hypothetically optimal policy would be close to uniform, and so we observe less distinct separation between each of the cases in Figure 3(f) as compared to Figure 3(d) and Figure 3(e). The results in Figure 3(f) do not, however, preclude the possibility that there exists an equilibrium policy for both players.

In general, the results support the notion that a Nash equilibrium exists for the game over the average network infection, ~In, and that using the solutions obtained from the gradient descent over the expected network exposure may provide a good estimation as to what such an equilibrium policy may look like. However, the desire to guarantee such claims necessitates further follow up, as these simulations provide only a narrow view.