We develop and analyze a variant of variance reducing stochastic gradient algorithm, known as SARAH, which does not require computation of the exact gradient. Thus this new method can be applied to general expectation minimization problems rather than only finite sum problems. While the original SARAH algorithm, as well as its predecessor, SVRG, require an exact gradient computation on each outer iteration, the inexact variant of SARAH (iSARAH), which we develop here, requires only stochastic gradient computed on a mini-batch of sufficient size. The proposed method combines variance reduction via sample size selection and iterative stochastic gradient updates. We analyze the convergence rate of the algorithms for strongly convex, convex, and nonconvex cases with appropriate mini-batch size selected for each case. We show that with an additional, reasonable, assumption iSARAH achieves the best known complexity among stochastic methods in the case of general convex case stochastic value functions. 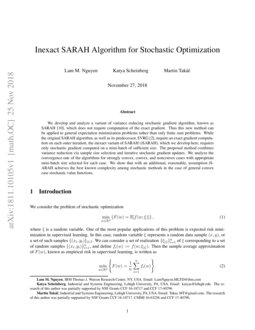 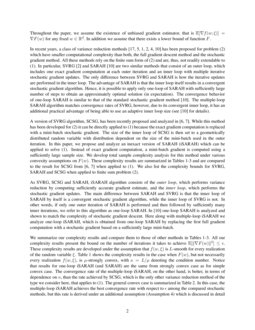 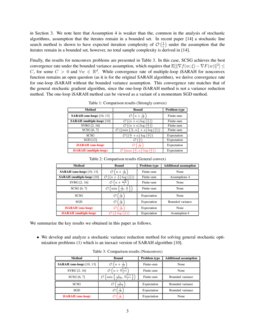 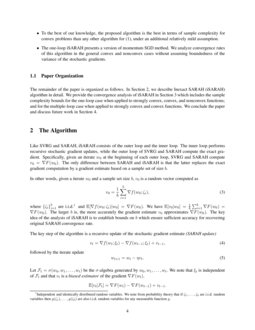 In this paper, we propose a stochastic optimization method that adaptive...
Raghu Bollapragada, et al. ∙

We develop and analyze a procedure for gradient-based optimization that ...
Lihua Lei, et al. ∙

In this paper, we consider the convex and non-convex composition problem...
Liu Liu, et al. ∙

We consider the problem of stochastic optimization

is a random variable. One of the most popular applications of this problem is expected risk minimization in supervised learning. In this case, random variable

ξ represents a random data sample (x,y), or a set of such samples {(xi,yi)}i∈I. We can consider a set of realization {ξ[i]}ni=1 of ξ corresponding to a set of random samples {(xi,yi)}ni=1, and define fi(w):=f(w;ξ[i]). Then the sample average approximation of F(w), known as empirical risk in supervised learning, is written as

Throughout the paper, we assume the existence of unbiased gradient estimator, that is

E[∇f(w;ξ)]=∇F(w) for any fixed w∈Rd. In addition we assume that there exists a lower bound of function F.

In recent years, a class of variance reduction methods [17, 5, 1, 2, 4, 10] has been proposed for problem (2) which have smaller computational complexity than both, the full gradient descent method and the stochastic gradient method. All these methods rely on the finite sum form of (2) and are, thus, not readily extendable to (1). In particular, SVRG [2] and SARAH [10] are two similar methods that consist of an outer loop, which includes one exact gradient computation at each outer iteration and an inner loop with multiple iterative stochastic gradient updates. The only difference between SVRG and SARAH is how the iterative updates are performed in the inner loop. The advantage of SARAH is that the inner loop itself results in a convergent stochastic gradient algorithm. Hence, it is possible to apply only one-loop of SARAH with sufficiently large number of steps to obtain an approximately optimal solution (in expectation). The convergence behavior of one-loop SARAH is similar to that of the standard stochastic gradient method [10]. The multiple-loop SARAH algorithm matches convergence rates of SVRG, however, due to its convergent inner loop, it has an additional practical advantage of being able to use an adaptive inner loop size (see [10] for details).

A version of SVRG algorithm, SCSG, has been recently proposed and analyzed in [6, 7]. While this method has been developed for (2) it can be directly applied to (1

) because the exact gradient computation is replaced with a mini-batch stochastic gradient. The size of the inner loop of SCSG is then set to a geometrically distributed random variable with distribution dependent on the size of the mini-batch used in the outer iteration. In this paper, we propose and analyze an inexact version of SARAH (iSARAH) which can be applied to solve (

1). Instead of exact gradient computation, a mini-batch gradient is computed using a sufficiently large sample size. We develop total sample complexity analysis for this method under various convexity assumptions on F(w). These complexity results are summarized in Tables 1-3 and are compared to the result for SCSG from [6, 7] when applied to (1). We also list the complexity bounds for SVRG, SARAH and SCSG when applied to finite sum problem (2).

As SVRG, SCSG and SARAH, iSARAH algorithm consists of the outer loop, which performs variance reduction by computing sufficiently accurate gradient estimate, and the inner loop, which performs the stochastic gradient updates. The main difference between SARAH and SVRG is that the inner loop of SARAH by itself is a convergent stochastic gradient algorithm, while the inner loop of SVRG is not. In other words, if only one outer iteration of SARAH is performed and then followed by sufficiently many inner iterations, we refer to this algorithm as one-loop SARAH. In [10]

We summarize our complexity results and compare them to those of other methods in Tables 1-3. All our complexity results present the bound on the number of iterations it takes to achieve E[∥∇F(w)∥2]≤ϵ. These complexity results are developed under the assumption that f(w,ξ) is L-smooth for every realization of the random variable ξ. Table 1 shows the complexity results in the case when F(w), but not necessarily every realization f(w,ξ), is μ-strongly convex, with κ=L/μ denoting the condition number. Notice that results for one-loop iSARAH (and SARAH) are the same from strongly convex case as for simple convex case. The convergence rate of the multiple-loop iSARAH, on the other hand, is better, in terms of dependence on κ, than the rate achieved by SCSG, which is the only other variance reduction method of the type we consider here, that applies to (1). The general convex case is summarized in Table 2. In this case, the multiple-loop iSARAH achieves the best convergence rate with respect to ϵ among the compared stochastic methods, but this rate is derived under an additional assumption (Assumption 4) which is discussed in detail in Section 3. We note here that Assumption 4 is weaker than the, common in the analysis of stochastic algorithms, assumption that the iterates remain in a bounded set. In recent paper [14] a stochastic line search method is shown to have expected iteration complexity of O(1ϵ) under the assumption that the iterates remain in a bounded set, however, no total sample complexity is derived in [14].

We summarize the key results we obtained in this paper as follows.

The remainder of the paper is organized as follows. In Section 2, we describe Inexact SARAH (iSARAH) algorithm in detail. We provide the convergence analysis of iSARAH in Section 3 which includes the sample complexity bounds for the one-loop case when applied to strongly convex, convex, and nonconvex functions; and for the multiple-loop case when applied to strongly convex and convex functions. We conclude the paper and discuss future work in Section 4.

In other words, given a iterate w0 and a sample set size b, v0

is a random vector computed as

Independent and identically distributed random variables. We note from probability theory that if

ζ1,…,ζb are i.i.d. random variables then g(ζ1),…,g(ζb) are also i.i.d. random variables for any measurable function g. and E[∇f(w0;ζi)|w0]=∇F(w0). We have E[v0|w0]=1b∑bi=1∇F(w0)=∇F(w0). The larger b is, the more accurately the gradient estimate v0 approximates ∇F(w0). The key idea of the analysis of iSARAH is to establish bounds on b which ensure sufficient accuracy for recovering original SARAH convergence rate.

followed by the iterate update

Let Ft=σ(w0,w1,…,wt) be the σ-algebra generated by w0,w1,…,wt. We note that ξt is independent of Ft and that vt is a biased estimator of the gradient ∇F(wt).

In contrast, SVRG update is given by

which implies that vt is an unbiased estimator of ∇F(wt).

As a variant of SARAH, iSARAH inherits the special property that a one-loop iSARAH, which is the variant of Algorithm 1 with T=1 and m→∞ is a convergent algorithm. In the next section we provide the analysis for both one-loop and multiple-loop versions of i-SARAH.

Convergence criteria. Our iteration complexity analysis aims to bound the total number of stochastic gradient evaluations needed to achieve a desired bound on the gradient norm. For that we will need to bound the number of outer iterations T which is needed to guarantee that ∥∇F(wT)∥2≤ϵ and also to bound m and b. Since the algorithm is stochastic and wT is random the ϵ-accurate solution is only achieved in expectation. i.e.,

The analysis of the proposed algorithm will be performed under apropriate subset of the following key assumptions.

f(w;ξ) is L-smooth for every realization of ξ, i.e., there exists a constant L>0 such that

Note that this assumption implies that F(w)=E[f(w;ξ)] is also L-smooth. The following strong convexity assumption will be made for the appropriate parts of the analysis, otherwise, it would be dropped.

The function F:Rd→R, is μ-strongly convex, i.e., there exists a constant μ>0 such that ∀w,w′∈Rd,

Under Assumption 2, let us define the (unique) optimal solution of (2) as w∗, Then strong convexity of F implies that

Under strong convexity assumption we will use κ to denote the condition number κdef=L/μ.

Finally, as a special case of the strong convexity with μ=0, we state the general convexity assumption, which we will use for some of the convergence results.

We note that Assumption 2 does not imply Assumption 3, because the latter applies to all realizations, while the former applied only to the expectation.

We provide some well-known results from the existing literature that support our theoretical analysis as follows. First, we start introducing two standard lemmas in smooth convex optimization ([8]) for a general function f.

Suppose that f is convex and L-smooth. Then, for any w, w′∈Rd,

Note that (10) does not require the convexity of f.

Suppose that Assumptions 1 and 3 hold. Then, ∀w∈Rd,

Suppose that Assumptions 1 and 3 hold. Then, for ∀w∈Rd,

The proof of this Lemma is in [11]. We are going to use mathematical induction to prove the result. With b=1, it is easy to see

The third and the last equalities follow since ξ,ξ1,…,ξb are i.i.d. with E[∇f(w;ξi)]=∇F(w). Therefore, the desired result is achieved. ∎

Based on the above lemmas, we will show in detail how to achieve our main results in the following subsections.

The most important property of the SVRG algorithm is the variance reduction of the steps. This property holds as the number of outer iteration grows, but it does not hold, if only the number of inner iterations increases. In other words, if we simply run the inner loop for many iterations (without executing additional outer loops), the variance of the steps does not reduce in the case of SVRG, while it goes to zero in the case of SARAH with large learning rate in the strongly convex case. We recall the SARAH update as follows.

followed by the iterate update:

We will now show that ∥vt∥2 is going to zero in expectation in the strongly convex case. These results substantiate our conclusion that SARAH uses more stable stochastic gradient estimates than SVRG.

The proof of this Proposition can be derived directly from Theorem 1b in [13]. This result implies that by choosing η=O(1/L), we obtain the linear convergence of ∥vt∥2 in expectation with the rate (1−1/κ2).

We begin with providing two useful lemmas that do not require convexity assumption. Lemma 6 bounds the sum of expected values of ∥∇F(wt)∥2; and Lemma 7 expands the value of E[∥∇F(wt)−vt∥2].

Suppose that Assumption 1 holds. Consider iSARAH-IN (Algorithm 2). Then, we have

By Assumption 1 and wt+1=wt−ηvt, we have

where the last equality follows from the fact aTb=12[∥a∥2+∥b∥2−∥a−b∥2].

where the second inequality follows since w∗=argminwF(w). ∎

Suppose that Assumption 1 holds. Consider vt defined by (4) in iSARAH-IN (Algorithm 2). Then for any t≥1,

where the last equality follows from

By taking expectation for the above equation, we have

In this subsection, we analyze one-loop results of Inexact SARAH (Algorithm 2) in the general convex case. We first derive the bound for E[∥∇F(wt)−vt∥2].

which, if we take expectation, implies that

Suppose that Assumptions 1 and 3 hold. Consider v0 defined as (3) in SARAH (Algorithm 1). Then we have,

By Corollary 1, we have

Taking the expectation and adding ηL2−ηLE[∥∇F(w0)∥2] for both sides, the desired result is achieved. ∎

We then derive this basic result for the convex case by using Lemmas 8 and 9.

Suppose that Assumptions 1 and 3 hold. Consider iSARAH-IN (Algorithm 2) with η≤1/L. Then, we have