In recent years, the Deep Learning Alternating Minimization (DLAM), which is actually the alternating minimization applied to the penalty form of the deep neutral networks training, has been developed as an alternative algorithm to overcome several drawbacks of Stochastic Gradient Descent (SGD) algorithms. This work develops an improved DLAM by the well-known inertial technique, namely iPDLAM, which predicts a point by linearization of current and last iterates. To obtain further training speed, we apply a warm-up technique to the penalty parameter, that is, starting with a small initial one and increasing it in the iterations. Numerical results on real-world datasets are reported to demonstrate the efficiency of our proposed algorithm. 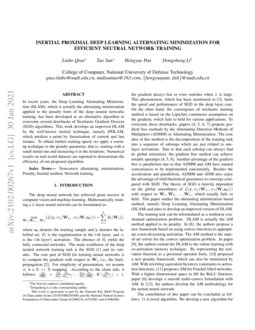 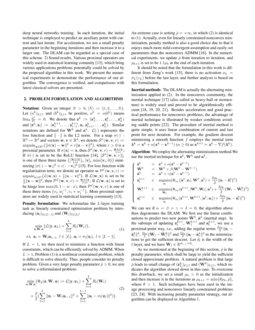 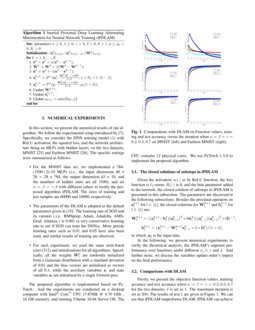 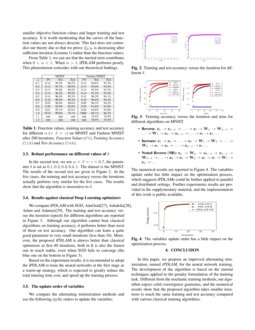 In this paper, we consider a class of nonconvex problems with linear con...
Tao Sun, et al. ∙

L-layer neural network can be formulated as:

where a0 denotes the training sample and y denotes the labelled set, Rl is the regularization in the l-th layer, and σl is the l-th layer’s activation. The absence of Rl yields the fully connected networks. The main workhorse of the deep neutral network training task is the SGD [1] and its variants. The core part of SGD for training neural networks is to compute the gradient with respect to Wl

[2]. For simplicity of presentation, we assume σl is a R↦R

mapping. According to the chain rule, it follows:

∂L∂W1=∂L∂σL∂σL∂σL−1…∂σ2∂σ1∂σ1∂W1. If |∂σl∂σl−1|<1, the gradient decays fast or even vanishes when L is large. This phenomenon, which has been mentioned in [3], hurts the speed and performance of SGD in the deep layer case. On the other hand, the convergence of stochastic training method is based on the Lipschitz continuous assumption on the gradient, which fails to hold for various applications. To overcome these drawbacks, papers [4, 5, 6, 7] propose gradient free methods by the Alternating Direction Methods of Multipliers (ADMM) or Alternating Minimization. The core idea of this method is the decomposition of the training task into a sequence of substeps which are just related to one-layer activations. Due to that each substep can always find its global minimizer, the gradient free method can achieve notable speedups [4, 5, 6]. Another advantage of the gradient free is parallelism due to that ADMM and AM have natural conveniences to be implemented concurrently. Besides the acceleration and parallelism, ADMM and ADM also enjoy the advantage of mild theoretical guarantees to converge compared with SGD: The theory of SGD is heavily dependent on the global smoothness of L(y,σL(WL...σ1(W1a0))) with respect to W1,W2,…,WL, which usually fails to hold. This paper studies the alternating minimization based method, namely Deep Learning Alternating Minimization (DLAM) and aims to develop an improved version of DLAM.

, the authors extend the DLAM to the online learning with co-activation memory technique. By representing the activation function as a proximal operator form,

[10] proposed a new penalty framework, which can also be minimized by AM. With rewriting equivalent biconvex constraints to activation functions, [11]

proposes AM for Fenchel lifted networks. With a higher dimensional space to lift the ReLU function, paper

[6] develops a smooth multi-convex formulation with AM. In [12], the authors develop the AM methodology for the nested neural network.

The contribution of this paper can be concluded as follows: 1) A novel algorithm. We develop a new algorithm for deep neural networks training. In each iteration, the initial technique is employed to predict an auxiliary point with current and last iterate. For acceleration, we use a small penalty parameter in the beginning iterations and then increase it to a larger one. The DLAM can be regarded as a special case of this scheme. 2) Sound results. Various proximal operaters are widely used in statistical learning comunity [13], which bring various applications problems potentially could be solved by the proposed algorithm in this work. We present the numerical experiments to demonstrate the performance of our algorithm. The convergence is verified, and comparisons with latest classical solvers are presented.

represents the loss function and

If L=1, we then need to minimize a function with linear constraints, which can be efficiently solved by ADMM. When L>1, Problem (1) is a nonlinear constrained problem, which is difficult to solve directly. Thus, people consider its penalty problem. Given a very large penalty parameter ¯ρ>0, we aim to solve a reformulated problem:

An extreme case is setting ¯ρ=+∞, in which (2) is identical to (1). Actually, even for linearly constrained nonconvex minimization, penalty method is also a good choice due to that it enjoys much more mild convergent assumption and easily-set parameters than the nonconvex ADMM [16]. In the numerical experiments, we update ¯ρ from iteration to iteration, and ρk+1 is set to be 1.1ρk at the end of each iteration.

It should be noted that the formulation in this work is different from Zeng’s work [15], there is no acitvation aL=σL(zL) before the last layer, and further analysis is based on this formulation.

Inertial methods: The DLAM is actually the alternating minimization applied to (2). In the nonconvex community, the inertial technique [17] (also called as heavy-ball or momentum) is widely used and proved to be algorithmically efficient [18, 19, 20, 21]. Besides acceleration and good practical performance for nonconvex problems, the advantage of inertial technique is illustrated by weaker conditions avoiding saddle points [22]. The procedure of inertial method is quite simple, it uses linear combination of current and last point for next iteration. For example, the gradient descent minimizing a smooth function f employs the inertial term ^xk=xk+α(xk−xk−1) (α≥0) as xk+1=xk−∇f(^xk).

Algorithm: We employ the alternating minimization method.We use the inertial technique for zk, Wk and ak,

We can see if α=β=γ=δ=0, the algorithm above then degenerates the DLAM. We first use the linear combinations to predict two new points ^Wk,^ak (inertial step). In the substeps of updating zk+1l, Wk+1l and ak+1l, we use a proximal-point way, i.e., adding the regular terms δρk2∥zl−^zkl∥2, δρk2∥Wl−^Wkl∥2 and δρk2∥al−^akl∥2 in the minimizations to get the sufficient descent. Let dl is the width of the l-layer, and we have Wl∈Rdl−1×dl.

As we mentioned at the beginning of this section, ¯ρ is the penalty parameter, which shall be large to yield the sufficient closed approximate problem. A natural problem is that large ¯ρ leads to small change of (zkL)k≥1 and (Wk)k≥1, which indicates the algorithm slowed down in this case. To overcome this drawback, we set a small ρ0>0 as the initialization and then increase it in the iterations as ρk+1=min{θρk,¯ρ}, where θ>1. Such techniques have been used in the image processing and nonconvex linearly constrained problems [23, 24]. With increasing penalty parameter strategy, our algorithm can be displayed in Algorithm 1.

In this section, we present the numerical results of our algorithm. We follow the experimental setup introduced by [7]. Specifically, we consider the DNN training model (1

) with ReLU activation, the squared loss, and the network architecture being an MLPs with hidden layers, on the two datasets, MNIST

[25] and Fashion MNIST [26]. The specific settings were summarized as follows:

The proposed algorithm is implemented based on PyTorch. And the experiments are conducted on a desktop computer with Intel

3.1 The closed solutions of substeps in iPDLAM

Given the activation σl(⋅) to be ReLU function, the loss function is ℓ2-norm, Rl(⋅) is 0, and the bias parameter added to the network, the closed solution of substeps in iPDLAM is presented in this subsection. The parameters are discussed in the following subsections. Besides the proximal operators on zk+1l for l∈[L], the closed solutions for Wk+1l and bk+1l for l∈[L] are:

in which, a0 is the input data.

In the following, we present numerical experiments to verify the theoretical analysis, the iPDLAM’s superem performance over baselines under different α,β,γ and δ. And further more, we discuss the variables update order’s impect on the final performance.

From Table 1, we can see that the inertial term contributes when 0<α<1. When α>1, iPDLAM performs poorly. This phenomenon coincides with our theoretical findings.

. The training and test accuracy versus the iteration (epoch) for different algorithms are reported in Figure

3. Although our algorithm cannot beat classical algorithms on training accuracy, it performs better than most of them on test accuracy. Our algorithm can learn a quite good parameter in very small iterations (less than 10). Moreover, the proposed iPDLAM is alawys better than classical optimizers at first 40 iterations, both in It is also the fastest one to reach stable, even when SGD fails to converge (the blue one on the bottom in Figure 3).

Based on the experiment results, it is recomended to adopt the iPDLAM to train the neural networks at the first stage as a warm-up strategy, which is expected to greatly reduce the total training time cost, and speed up the training process.

3.5 The update order of variables

We compare the alternating minimization methods and use the following cyclic orders to update the variables:

The numerical results are reported in Figure 4. The variables update order has little impact on the optimization process, which suggests iPDLAMs could be further applied to parallel and distributed settings. Further experiments results are provided in the supplymentary material, and the implementation of this work is public available.

In this paper, we propose an improved alternating minimization, named iPDLAM, for the neural network training. The development of the algorithm is based on the inertial techniques applied to the penalty formulation of the training task. Different from the stochastic training methods, our algorithm enjoys solid convergence guarantee, and the numerical results show that the proposed algorithm takes smaller iterations to reach the same training and test accuracy compared with various classical training algorithms.