In supervised learning, an inductive learning algorithm extracts general rules from observed training instances, then the rules are applied to test instances. We show that this splitting of training and application arises naturally, in the classical setting, from a simple independence requirement with a physical interpretation of being non-signalling. Thus, two seemingly different definitions of inductive learning happen to coincide. This follows from the properties of classical information that break down in the quantum setup. We prove a quantum de Finetti theorem for quantum channels, which shows that in the quantum case, the equivalence holds in the asymptotic setting, that is, for large number of test instances. This reveals a natural analogy between classical learning protocols and their quantum counterparts, justifying a similar treatment, and allowing to inquire about standard elements in computational learning theory, such as structural risk minimization and sample complexity. 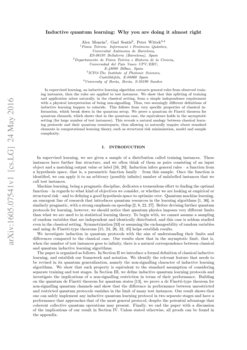 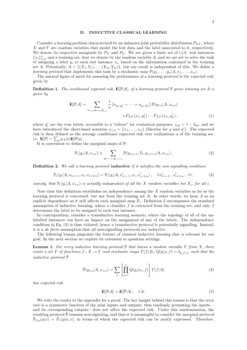 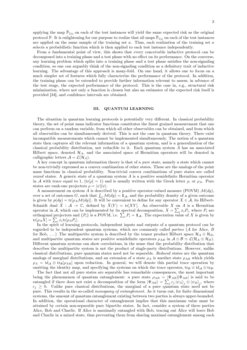 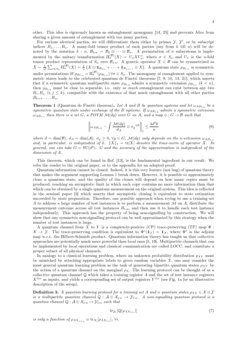 Appendix A Supplemental material: Proof of our main result

Our main result, Theorem 3 (Theorem 1 in the main text), consists in showing that for every non-signalling CPTP map Q:A⊗X1:n→Y1:n there is a symmetric one-way LOCC map Q:A⊗X1:n→¯Y1:n that approximately reproduces all local expectation values, and is non-signalling by construction. The backbone of our result is the quantum de Finetti theorem, specifically in its form as it appears in Christandl et al. (2007), which we restate here:

Let A and B be quantum systems and let ωAB1:k be a symmetric quantum state under exchange of the B systems. If ωAB1:k admits a symmetric extension ωAB1:n then there is a set G, a POVM M(dg) over G on A, and a map ϕ:G→B such that

where d=dim(B), dA=dim(A), ϕg≥0,∀g∈G, M(dg) only depends on the n-extension ωAB1:n and, in particular, is independent of k. ∥X∥1=tr|X| denotes the trace-norm of operator X. In general, one can take G=SU(d2). G and the accuracy of the approximation is independent of the dimension of A.

In order to apply Theorem 1 to our problem, we also use the Choi-Jamiolkowski identification between quantum states and quantum channels Bengtsson and Życzkowski (2006).

Every CP map Φ:X→Y can be represented by a positive semidefinite operator ϕ∈X⊗Y, such that

The adjoint map Φ∗:Y→X is given by (we use the customary identification between X∗ and X induced by the Hilbert-Schmidt product)

This allows us to characterize properties of channels by referring to properties of their respective Choi matrices. The non-signalling property of a quantum channel has a direct relation with the reduced states of its Choi matrix:

Let Q:A⊗X1:n→Y1:n be a non-signalling quantum channel, and let ωA(XY)1:n be its Choi matrix. Then

Lemma 1 is proved by straightforward evaluation.

For k=0 the approximation is exact, so ∫GM(dg)=tr(XY)1:n[ωA(XY)1:n]=\openoneA/dA, therefore M(dg)=dAM(dg) is a POVM. The positive semidefinite quantum states ϕg describe a family of completely positive maps Φg:X→Y.

The state ηA(XY)1:k does not, however, represent a quantum operation which is deterministically realizable, in the first place because trY1:k[ηA(XY)1:k] may not be \openoneAX1:k/dAdkX, as is required for a trace-preserving channel. Furthermore, a quantum channel can be implemented by 1-way LOCC iff its Choi matrix is of the form

where trY[~ϕg]=\openone/d, for all g∈G. This would ensure that all corresponding CP maps ~Φg are trace-preserving, and thus the channel described by ~ηA(XY)1:k can be implemented by first performing measurement M on A and then applying ~Φg:X→Y on each of the systems X.

Although one does not expect that each ϕg in Eq. (9) satisfies

on average they approximately do. More importantly, we now show that the outcomes g are concentrated with high probability on those ϕg which almost satisfy the condition. Let ∥⋅∥1 be the trace-norm and ∥⋅∥∞ be the operator norm.

is a separable approximation of ωA(XY)1:k such that

Then, the following holds

Consider the measurement M(dg)=dAM(dg) is performed on the state \openoneA/dA yielding outcome g, and Φg:X→Y is to be applied on each of the test instances. Of course, for this to be deterministically implementable, one needs that Φ∗(\openoneY)=\openoneX, which amounts to τg=trY[ϕ⊤Xg]=\openoneX/dX. If this condition is met approximately, one can implement a suitably modified map ~Φg at the expense of actually implementing a slightly worse approximation to Q. However, if the condition is not met even approximately, the implementation cannot be expected to approximate Q. Lemma 2 shows that this case is unlikely to occur, since

Hence, one can slightly modify the operators ϕg into ~ϕg in order to satisfy Eq. (11) and ensure that in all cases, either ϕg and ~ϕg are close enough, or g is unlikely enough so that the approximation still converges in n to the actual channel given by ωA(XY)1:n. We call this a 1-way LOCC approximation.

is a separable approximation to ωAXY,

where c is a constant depending on dim(X) and dim(Y).

Let M(dg) and {ϕg} be the factors in the de Finetti approximation to ωA(XY)1:k, which admits a symmetric n-extension by assumption. Then they satisfy Eq. (12) with δ=4d2Xd2Y/n. From Statement 1 in Lemma 2 we have

Therefore, for ϵ<1dx−δ we have

Thus, we can ensure that all g∈Rϵ satisfy τg>0. We can define

where φ is the Choi matrix of any CPTP map X→Y. By definition every g∈Rϵ has τg≥E1[G]−ϵ\openone, and using E1[G]≥(1d−δ)\openone we can write

Thus, Lemma 6 shows that for all g∈Rϵ,

and the triangle inequality we get

Taking k=1 and using the triangle inequality we get

Having established a 1-way LOCC approximation bound for any symmetric non-signalling channel, we can now proceed to prove our main result (Theorem 1 in the main text):

We want to obtain approximation bounds for

The specific form of ρA(XY′)1:n is irrelevant for our purposes, besides symmetry among the XY′ parties. Expressing E[Q] in terms of the symmetrized local channel ¯Q1, and in turn, in terms of its Choi matrix, we have

To ease the notation, it is convenient to define R=trY′[(ρAXY′⊗\openoneY)⊤AX(\openoneAX⊗S)]∈A⊗X⊗Y, so that Eq. (A) reads

Finally, we can absorb the constant ∥R∥∞ into the factors preceeding 1/n1/6. ∎

Appendix B Proofs of Lemmas and Theorem 1

We restate and prove Lemma 1 in the main text. We also mention that a related but more general result on a de Finetti theorem for non-signalling classical conditional probability distributions can be found in

For every inductive learning protocol P that assigns labels yi to test instantes xi, there exists a set F of classifying functions f:X→Y and stochastic maps T(f|A), Q(y|x,f)=δy,f(x) such that the inductive protocol ~P

Consider the expected risk E[P] of protocol P. Let σ∈Sn be any permutation of n elements, and let the P(σ) be the accordingly permuted protocol

It follows trivially that

One can define the marginal maps ¯Pi, which are all equal, so we refer to them as ¯P1,

Since P is non-signalling, so is ¯P, namely ¯P1 satisfies the condition

and so we can simply write ¯P1(y|A,x). The conditional expected risk can be expressed in terms of ¯P1,

Considering A fixed, ¯P1(y|A,x) is a stochastic map from X to Y, and thus it is a convex combination of deterministic maps Qf(y|x)=δy,f(x) for some set of functions f∈F, i.e.

where μA is a probability measure that depends on A. Then

Thus, the stochastic maps Q(y|x,f)=Qf(y|x) and T(f|A)=μA(f) can be combined into the protocol

The following proof of Theorem 1 reproduces that of the original paper Christandl et al. (2007), where, as suggested, a probability measure is replaced by an operator-valued measure.

Let us start by assuming ωAB1:k admits a pure state extension ΨAB1:n=∣∣ΨAB1:n⟩⟨ΨAB1:n∣∣. Then

Let g be a generic SU(d) element, |0⟩ a reference state in HB, and dg the Haar measure on SU(d). Let ∣∣ϕg⟩=Ug|0⟩ and use ϕg=∣∣ϕg⟩⟨ϕg∣∣.

This allows to write

Then ωAB1:k is close to a convex combination of separable and B-iid states ∫M(dg)⊗ϕ⊗kg, with a distribution M(dg) independent of k, namely

We now bound ∥Δk∥1=∥S−δ∥1, where

One can readily check that

Notice that this is an operator in A. With this we have