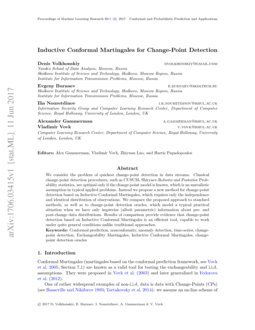 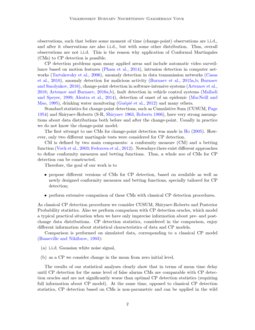 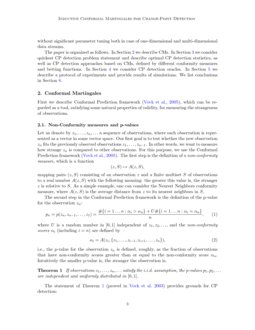 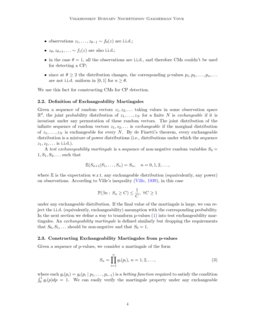 A review on minimax rates in change point detection and localisation

The development of an information criterion for Change-Point Analysis

We consider the problem of detecting abrupt changes in the distribution ...
Nicolas Keriven, et al. ∙

We consider the problem of estimating the location of a single change po...
Monika Bhattacharjee, et al. ∙

Conformal Martingales (martingales based on the conformal prediction framework, see Vovk et al. 2005, Section 7.1) are known as a valid tool for testing the exchangeability and i.i.d. assumptions. They were proposed in Vovk et al. (2003) and later generalized in Fedorova et al. (2012).

One of rather widespread examples of non-i.i.d. data is data with Change-Points (CPs) (see Basseville and Nikiforov 1993; Tartakovsky et al. 2014

): we assume an on-line scheme of observations, such that before some moment of time (change-point) observations are i.i.d., and after it observations are also i.i.d., but with some other distribution. Thus, overall observations are not i.i.d. This is the reason why application of Conformal Martingales (CMs) to CP detection is possible.

Standard statistics for change-point detections, such as Cumulative Sum (CUSUM, Page 1954) and Shiryaev-Roberts (S-R, Shiryaev 1963, Roberts 1966), have very strong assumptions about data distributions both before and after the change-point. Usually in practice we do not know the change-point model.

The first attempt to use CMs for change-point detection was made in Ho (2005). However, only two different martingale tests were considered for CP detection.

Therefore, the goal of our work is to

Comparison is performed on simulated data, corresponding to a classical CP model (Basseville and Nikiforov, 1993):

First we describe Conformal Prediction framework (Vovk et al., 2005), which can be regarded as a tool, satisfying some natural properties of validity, for measuring the strangeness of observations.

a sequence of observations, where each observation is represented as a vector in some vector space. Our first goal is to test whether the new observation

zn fits the previously observed observations z1,…,zn−1. In other words, we want to measure how strange zn is compared to other observations. For this purpose, we use the Conformal Prediction framework (Vovk et al., 2005). The first step is the definition of a non-conformity measure, which is a function

mapping pairs (z,S) consisting of an observation z and a finite multiset S of observations to a real number A(z,S) with the following meaning: the greater this value is, the stranger z is relative to S. As a simple example, one can consider the Nearest Neighbors conformity measure, where A(z,S) is the average distance from z to its nearest neighbors in S.

The second step in the Conformal Prediction framework is the definition of the p-value for the observation zn:

where U is a random number in [0,1] independent of z1,z2,…, and the non-conformity scores αi (including i=n) are defined by

are independent and uniformly distributed in

We use this fact for constructing CMs for CP detection.

Given a sequence of random vectors z1,z2,… taking values in some observation space Rd

, the joint probability distribution of

z1,…,zN for a finite N is exchangeable

is a sequence of non-negative random variables

where E is the expectation w.r.t. any exchangeable distribution (equaivalently, any power) on observations. According to Ville’s inequality (Ville, 1939), in this case

Given a sequence of p-values, we consider a martingale of the form

where each gi(pi)=gi(pi∣p1,…,pi−1) is a betting function required to satisfy the condition ∫10gi(p)dp=1. We can easily verify the martingale property under any exchangeable distribution:

The intuition behind the betting function is the following: we would like to penalize the fact that p-values are not uniformly distributed (cf. Theorem 2.1). In Section 3.6 we describe several betting functions along with their advantages and disadvantages.

We observe sequentially a series of independent observations whose distribution changes from f0(z) to f1(z) at some unknown point θ in time. Formally, z1,z2,…,zn,… are independent random variables such that z1,z2,…,zθ−1 are each distributed according to a distribution f0(z) and zθ,zθ+1,… are each distributed according to a distribution f1(z), where 1≤θ≤∞ is unknown. The objective is to detect that a change has taken place “as soon as possible” after its occurrence, subject to a restriction on the rate of false detections.

Historically, the subject of change-point detection first began to emerge in the 1920-1930’s motivated by considerations of quality control. When a process is “in control,” observations are distributed according to f0(z). At an unknown point θ, the process jumps “out of control” and subsequent observations are distributed according to f1(z). We want to raise an alarm “as soon as possible” after the process jumps “out of control”.

Current approaches to change-point detection were initiated by the pioneering work of Page (1954). In order to detect a change in a normal mean from μ0 to μ1>μ0 he proposed the following stopping rule τ: stop and declare the process to be “out of control” as soon as Cn−min1≤k≤nCk gets large, where Ck=∑ki=1(zi−μ∗) and μ0<μ∗<μ1 is suitably chosen. This and related procedures are known as CUSUM (cumulative sum) procedures (see Shiryaev 2010 for a survey).

the likelihood of observations z1,…,zn without CP.

. A loss function has the form

P(τ≤θ)+cE(τ−θ)+, where (x)+=max(x,0) and c>0. Shiryaev showed that it is optimal to stop observations as soon as the posterior probability of a change exceeds a fixed level h, i.e., τPP=inf{n:φn≥h}, where

In the non-Bayesian (minimax) setting of the problem, the objective is to minimize the expected detection delay for some worst-case change-time distribution, subject to a cost or constraint on false alarms. Here the classical optimality result is due to Lorden, Ritov and Moustakides (Lorden, 1971; Moustakides, 1986; Ritov, 1990). They evaluate the speed of detection by supθesssupωE((τ−θ+1)+∣z1,…,zθ−1)(ω) under the restriction that the stopping rules τ must satisfy E(τ∣θ=∞)≥T. In fact from results of Lorden, Ritov and Moustakides it follows that Page’s aforementioned stopping rule, which takes the form τCUSUM=inf{n:γn≥h} with

Pollak (1985; 1987) considered another non-Bayesian setting: the speed of detection is evaluated by sup1≤θ<∞E(τ−θ∣τ≥θ) under the same restriction on the stopping rules, i.e. τ must satisfy E(τ∣θ=∞)≥T. Pollak proved that the so-called Shiryaev-Roberts statistics (Shiryaev, 1963; Roberts, 1966) is asymptotically (T→∞) minimax. The corresponding stopping rule has the form τS-R=inf{n:ψn≥h} with

The main disadvantage of statistics (6), (7) and (8) is that we should have full information about the CP model, in particular, we should know data distributions before and after the CP. In most of practical situations such assumptions are unrealizable.

Let us describe a modification of Conformal Martingales tailored for the CP detection problem:

The complete procedure is summarized in Algorithm 1. The stopping rule for CP detection has the form τCM=inf{n:Cn≥h}, where Cn is the modification of the corresponding CM, calculated according to (9). Notice that

An example of the martingale is given in Fig. 1

. Here we consider observations from a normal distribution with a unit variance, such that at

Let us check empirically that our method is valid for small values of train set size m (the theoretical validity is lost because of the transition from Sn to Cn). For this purpose we generate observations from N(⋅∣0,1) without CP and with CP (mean changes from 0 to 1 at θ=500). Here N(z∣μ,σ2) is a value at point z of a normal density with mean μ and variance σ2. We use k Nearest Neighbor non-conformity measure (see section 3.5 below). We plot ICM for train set sizes m∈{1,2,3,4,5} in Fig. 2. Results of simulations, provided in Fig. 2, confirm the validity of our approach.

Let us describe non-conformity measures that we use:

Let us describe Betting Functions that we use:

In the current section we describe Oracles for CP detection that we compare with CP detection based on Conformal Martingales.

4.1 Motivation to use Oracles

We assume that fi(z), i=0,1, belong to some parametric class of densities, i.e., fi(z)=f(z∣ci), where ci∈C, i=0,1 are vectors of parameters. We impose the same prior q(c) on the parameters ci, i=0,1. Thus, instead of likelihood (5) of observations without CP we use

In the current section we describe our experimental setup and provide results of experiments.

We consider the following experimental setup:

As performance characteristics we use:

In all experiments using Monte-Carlo simulations we estimate dependency of the mean delay E1(τ−θ∣τ>θ) on the probability of the false alarm P0(τ≤θ).

of the geometric distribution to

In experiments we consider all possible combinations of different types of Oracles, betting functions from section 3.6, non-conformity measures from section 3.5, as well as different values of μ1∈{1,1.5,2} and θ∈{100,200}. In the case of kNN NCM we set k to 7.

5.2 Refinement of the experimental setup

When applying Conformal Martingales both original and inductive versions can be used. First let us check that the inductive version is not worse than the original one. In our comparison we use a simple NCM: αi=A(zi,{z1,…,zi−1,zi+1,…,zn}=∣∣zi−1n−1∑j≠izj∣∣. In Fig. 3 we plot estimated dependency of the mean delay on the probability of the false alarm for both ICM and CM with the constant betting function and different oracles. As we can see, there is almost no difference in the original and inductive versions. Later we consider only Inductive Conformal Martingales.

Results for Mixture Betting Function are in Fig. 6. Mean delays for some values of false alarm probability are in Tab. 2.

Results for Kernel Betting Function are in Fig. 7. Mean delays for some values of false alarm probability are in Tab. 3. We use a sliding window of size L=100 to estimate density of p-values.

We can see, that results for the Kernel Betting Function is worse than for the Mixture Betting Function. The main reason is that it takes a long time for the martingale to grow sufficiently. In fact, before the change-point the distribution of p-values is uniform on [0,1]. If for the current moment of time n it holds that n−L≥θ, the distribution of p-values ps, s∈[n−L,n] is also uniform. Thus, the martingale grows only when the change-point θ is inside the interval [n−L,n], p-values from which are used for density estimation. This is the reason why in section 3.6 we propose new Precomputed Kernel Density Betting Function.

When learning the Precomputed Kernel Betting Function we use one realization z1,…,zn,… of length 1000 with a CP at θ=500, such that zn∼N(⋅∣0,1) for n<θ and zn∼N(⋅∣1,1) for n≥θ regardless of where the real CP is located and which amplitude it has.

Results for Precomputed Kernel Betting Function are in Fig. 8. Mean delays for some values of false alarm probability are in Tab. 4.

We also compare CP detection based on CMs with optimal detectors: Cumulative Sum (CUSUM), Shiryaev-Roberts (S-R) and Posterior Probability statistics (PP). One can see from Tab. 5 and Fig. 9 that our results are comparable to results of the optimal methods. CMs perform a little bit worse, but we should notice that it requires fewer assumptions (does not know the true f0 and f1) and is more general (distribution-free).

We also compare Inductive Conformal Martingales with methods that are optimal for known pre- and post-CP distributions, such as CUSUM, Shiryaev-Roberts and Posterior Probability statistics. Our results are worse but still they are comparable. Some deterioration is inevitable, of course, since CMs are distribution-free methods and, therefore, require much weaker assumptions.

We are grateful for the support from the European Union’s Horizon 2020 Research and Innovation programme under Grant Agreement no. 671555 (ExCAPE project). The research presented in Section 5 of this paper was supported by the RFBR grants 16-01-00576 A and 16-29-09649 ofi_m. This work was also supported by the Russian Science Foundation grant (project 14-50-00150), the UK EPSRC grant (EP/K033344/1), and the Technology Integrated Health Management (TIHM) project awarded to the School of Mathematics and Information Security at Royal Holloway. We are indebted to Prof. Ilya Muchnik, School of Data Analysis, Yandex, and Royal Holloway, University of London, for the studentship support of one of the authors.