In general, randomness tests included in a test suite are not independent of each other. This renders it difficult to fix a rational criterion through the whole test suite with an explicit significance level. In this paper, we focus on the Non-overlapping Template Matching Test, which is a randomness test included in the NIST statistical test suite. The test uses a parameter called "template" and we can consider a test item for each template. We investigate dependency between two test items by deriving the joint probability density function of the two p-values and propose a transformation to make multi test items independent of each other. 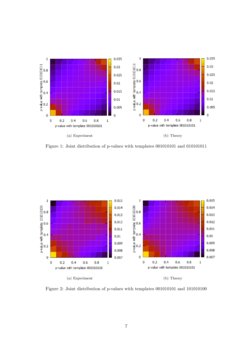 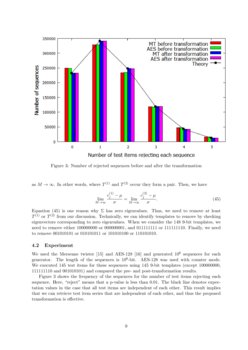 Analysis of NIST SP800-22 focusing on randomness of each sequence

NIST SP800-22 is a randomness test set applied for a set of sequences. A...
Atsushi Iwasaki, et al. ∙

Random number sequences are widely used in many fields such as information security and various stochastic algorithms. In general, the properties of the random number sequences used in these applications affects their efficiency and effectiveness. In information security contexts including cryptography, the quality of randomness is particularly important because security strength depends on this quality. Thus, it is necessary and important to evaluate the randomness of sequences or their generators from different perspectives.

There are many types of randomness tests and particular test suites have been proposed [2, 3, 4]. SP800-22 [4] published by the US National Institute of Standard and Technology (NIST) is one of the most well-known test suites. The first version was published in 2001 and revision 1a published in 2010 is currently valid. Revision 1a consists of 188 test items in the default setup that can be categorized into 15 test types. Some of the tests included therein are parametric, and so multi items can be implemented for each test.

For each test item included in SP800-22, a criterion is specified concerning whether the given sequences pass or not. However, a criterion that simultaneously covers all test items is not specified. This is a critical problem common to many test suites that needs to be addressed for the effective use of randomness tests. In general, test items included in one test suite are not independent of each other, i.e., p-values computed by multi test items do not distribute independently and the joint distribution is not known. This renders it difficult to specify a rational criterion through all test items. As an exception, Sugita proposed a test suite consisting of items that are independent of each other

[5], where p-values are computed based on “parity”. Previous studies have reported empirical results concerning the dependency among particular randomness tests [6, 7, 8, 9, 10, 11, 12, 13]. These studies were conducted under the null or under a certain alternative hypothesis. Considering dependency under an alternative hypothesis can be important from the perspective of computational burden. Notwithstanding the importance of extant work in this domain, the dependency among test items included in a given test suite has not received sufficient attention in the literature. In this paper, we aim to address this by focusing on test suite dependency under the null, culminating in the specification of a criterion through all test items.

In this section, we introduce the Non-overlapping Template Matching Test and confirm its soundness. Here, “soundness” means that a p-value follows the uniform distribution on

under the null hypothesis, at least approximately.

The Non-overlapping Template Matching Test algorithm is as follows:

for k=1,2,3,⋯,m−1. Where m=9, there are 148 templates satisfying the condition. The sample program provided by NIST uses the 148 9-bit templates in the default set up. The program performs these 148 test items as Non-overlapping Template Matching Tests, i.e., each test item is operationalized via the above algorithm using one of the 148 templates.

To satisfy the property of soundness, χobs is required to at least approximately follow a χ2-distribution with N degrees of freedom, under the null hypothesis. The requirement is satisfied if each cj

N(μ,σ2), at least approximately. Since the blocks do not overlap with each other, independence is assured. Then, we show that cj follows N(μ,σ2). This also serves as preparation for the next section.

First, we confirm that the average and the variance of

{0,1}M and let Ik be a random variable described as

Since B(j) is uniformly distributed, it is straightforward that

Similarly, the standard deviation can be derived as follows:

Then, σ2 approximates the variance of cj for sufficiently large M.

Next, we confirm that cj approximately follows a normal distribution. We use the following theorem [14]:

As M→∞, the random variable sequence {Ik}M−m+1k=1 satisfies the three conditions in theorem 2.1. Then, by (9) it is shown that cj approximately follows a normal distribution.

From the above, it is proven that cj follows N(μ,σ2) for sufficiently large M. Consequently, the soundness of the Non-overlapping Template Matching Test is established.

Consider two m-bit templates T(1) and T(2). In the following, we use the notation X(s) to denote variable X corresponding to T(s). The purpose of this section is to obtain the joint distribution of (p(1),p(2)) under the null hypothesis.

3.1 Derivation of the joint distribution

We define the following notation:

From the above, the correlation coefficient of the joint distribution ρ(T(1),T(2)) is computed as follows:

Hereafter, we ignore the remainder term of (31).

Next, we consider the joint cumulative distribution of (χ(1)obs,χ(2)obs). Assume that random variable pairs (x1,y1), (x2,y2), ⋯, (xN,yN) independently follow a two-dimensional normal distribution and that each marginal distribution is a standard normal distribution. We denote the correlation coefficient between xj and yj as ρ, which does not depend on j. We define XN and YN as follows:

It is straightforward that

Thus, we consider only the case that XN>0 and YN>0. In the sample program provided by NIST, the number of blocks is fixed at 8, and so we adopt the assumption that N is even. When −1<ρ<1

The results are illustrated in Figure 1 and 2 and testify to the robustness of the theory discussed in this section. It is also shown that we cannot regard the test items as independent of each other in practical contexts.

For each sequence, the sample program provided by NIST uses 148 templates and computes 148 Non-overlapping Template Matching Test p-values in the default setup. Thus, we need to extend the discussion in the former section and retrieve the 148 dimensional joint distribution of the 148 p-values. However, 148 dimensions is computationally onerous, so this needs to be circumvented. To transform the 148 test items and generate new test items that are independent of each other will be one of the solutions.

We propose a method to transform the test items by orthogonalization of a multi-dimensional normal distribution. We consider m-bit templates T(1), T(2), ⋯, T(R) and introduce notation Cj as

Assume that M is sufficiently large. The covariance matrix of Cj denoted by Σ is described as follows:

If det(Σ)≠0, then the probability density function of Cj is described as

is a real symmetric matrix, then there exists an orthogonal matrix

where I is a unit matrix. Using L and Q, we transform Cj to C′j as

Then, we obtain the probability density function of C′j as follows:

However, it is not ensured that det(Σ)≠0. Indeed, Σ

from our discussion. Technically, we can identify templates to remove by checking eigenvectors corresponding to zero eigenvalues. When we consider the 148 9-bit templates, we need to remove either

Figure 3 shows the frequency of the sequences for the number of test items rejecting each sequence. Here, “reject” means that a p-value is less than 0.01. The black line denotes expectation values in the case that all test items are independent of each other. This result implies that we can retrieve test item series that are independent of each other, and thus the proposed transformation is effective.

We derived the joint distribution of two Non-overlapping Template Matching Test p-values under the assumption that the block size is infinity. The results suggest that we cannot regard test items as independent of each other.

We also proposed a method to remove dependency using orthogonalization of a multi-dimensional normal distribution. Experimental results testify to the efficacy of the method. Thus, it is expected that the method will contribute to fixing a rational criterion through all test items in SP800-22 and thus to the appropriate use of randomness tests.

We represent the probability density function of (Xk,Yk) as pk,ρ

, the characteristic function of

pk,ρ as ϕk,ρ and the joint cumulative distribution function of (Xk,Yk) as Fk,ρ. For arbitrary k, the probability that Xk≤0 or Yk≤0 is zero, so in the following we consider the region where Xk>0 and Yk>0.

Then, the corresponding characteristic function ϕ1,ρ is computed as follows:

Here, i is the imaginary unit. We introduce the following change of variables:

Here, the root of a complex number is defined as

Since (x1,x2),⋯,(xN,yN) are mutually independent, we obtain

Then，since XN>0, using the integration path shown in fig. 4, Jordan’s lemma can be applied as follows: