As a fundamental subject of theoretical computer science, the maximum independent set (MIS) problem not only is of purely theoretical interest, but also has found wide applications in various fields. However, for a general graph determining the size of a MIS is NP-hard, and exact computation of the number of all MISs is even more difficult. It is thus of significant interest to seek special graphs for which the MIS problem can be exactly solved. In this paper, we address the MIS problem in the pseudofractal scale-free web and the Sierpiński gasket, which have the same number of vertices and edges. For both graphs, we determine exactly the independence number and the number of all possible MISs. The independence number of the pseudofractal scale-free web is as twice as the one of the Sierpiński gasket. Moreover, the pseudofractal scale-free web has a unique MIS, while the number of MISs in the Sierpiński gasket grows exponentially with the number of vertices. 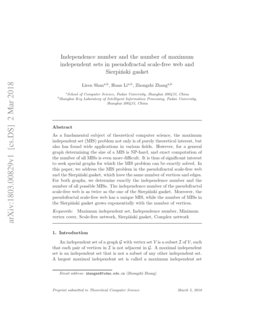 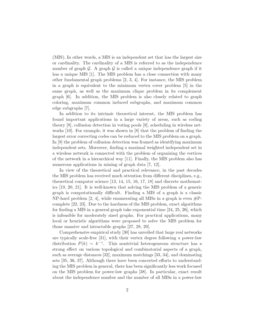 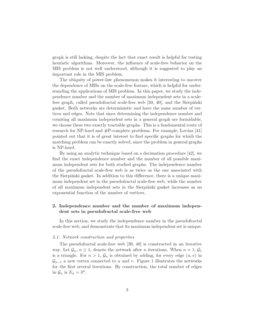 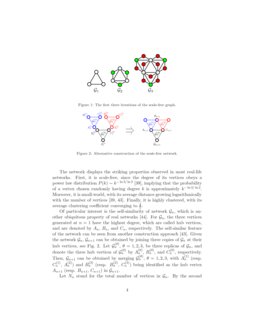 The k-Power Domination Number in Some Self-Similar Graphs

The k-power domination problem is a problem in graph theory, which has a...
Yulun Xu, et al. ∙

We consider the following problem: for a given graph G and two integers ...
Felicia Lucke, et al. ∙

A graph is called P_t-free if it does not contain a t-vertex path as an ...
Andrzej Grzesik, et al. ∙

In view of the theoretical and practical relevance, in the past decades the MIS problem has received much attention from different disciplines, e.g., theoretical computer science Murat and Paschos (2002); Xiao and Nagamochi (2013); Agnarsson et al. (2013); Hon et al. (2015); Lozin et al. (2015); Chuzhoy and Ene (2016) and discrete mathematics Čenek and Stewart (2003); Xiao and Nagamochi (2016); Mosca (2017). It is well-known that solving the MIS problem of a generic graph is computationally difficult. Finding a MIS of a graph is a classic NP-hard problem Robson (1986); Halldórsson and Radhakrishnan (1997), while enumerating all MISs in a graph is even #P-complete Valiant (1979a, b). Due to the hardness of the MIS problem, exact algorithms for finding a MIS in a general graph take exponential time Fomin and Kratsch (2010); Tarjan and Trojanowski (1977); Beame et al. (2007)

, which is infeasible for moderately sized graphs. For practical applications, many local or heuristic algorithms were proposed to solve the MIS problem for those massive and intractable graphs

Comprehensive empirical study Newman (2003) has unveiled that large real networks are typically scale-free Barabási and Albert (1999), with their vertex degree following a power-law distribution P(k)∼k−γ. This nontrivial heterogeneous structure has a strong effect on various topological and combinatorial aspects of a graph, such as average distances Chung and Lu (2002), maximum matchings Liu et al. (2011); Zhang and Wu (2015), and dominating sets Nacher and Akutsu (2012); Gast et al. (2015); Shan et al. (2017). Although there have been concerted efforts to understanding the MIS problem in general, there has been significantly less work focused on the MIS problem for power-law graphs Ferrante et al. (2008). In particular, exact result about the independence number and the number of all MISs in a power-law graph is still lacking, despite the fact that exact result is helpful for testing heuristic algorithms. Moreover, the influence of scale-free behavior on the MIS problem is not well understood, although it is suggested to play an important role in the MIS problem.

The ubiquity of power-law phenomenon makes it interesting to uncover the dependence of MISs on the scale-free feature, which is helpful for understanding the applications of MIS problem. In this paper, we study the independence number and the number of maximum independent sets in a scale-free graph, called pseudofractal scale-free web Dorogovtsev et al. (2002); Zhang et al. (2009), and the Sierpiński gasket. Both networks are deterministic and have the same number of vertices and edges. Note that since determining the independence number and counting all maximum independent sets in a general graph are formidable, we choose these two exactly tractable graphs. This is a fundamental route of research for NP-hard and #P-complete problems. For example, Lovász Lovász and Plummer (1986) pointed out that it is of great interest to find specific graphs for which the matching problem can be exactly solved, since the problem in general graphs is NP-hard.

In this section, we study the independence number in the pseudofractal scale-free web, and demonstrate that its maximum independent set is unique.

The pseudofractal scale-free web Dorogovtsev et al. (2002); Zhang et al. (2009) is constructed in an iterative way. Let Gn, n≥1, denote the network after n iterations. When n=1, G1 is a triangle. For n>1, Gn is obtained by adding, for every edge (u,v) in Gn−1 a new vertex connected to u and v. Figure 1 illustrates the networks for the first several iterations. By construction, the total number of edges in Gn is En=3n.

The network displays the striking properties observed in most real-life networks. First, it is scale-free, since the degree of its vertices obeys a power law distribution P(k)∼k−ln3/ln2 Dorogovtsev et al. (2002)

, implying that the probability of a vertex chosen randomly having degree

Let Nn stand for the total number of vertices in Gn. By the second construction of the network, Nn satisfies relation Nn+1=3Nn−3, which together with the initial value N1=3, is solved to give Nn=(3n+3)/2.

2.2 Independence number and the number of maximum independent sets

Let αn denote the independence number of network Gn. To determine αn, we introduce some intermediate quantities. Since the three hub vertices in Gn are connected to each other, any independent set of Gn

contains at most one hub vertex. We classify all independent sets of

Gn into two subsets Ω0n and Ω1n. Ω0n represents those independent sets with no hub vertex, while Ω1n denotes the remaining independent sets, with each having exactly one hub vertex. Let Θkn, k=0,1, be the subset of Ωkn, where each independent set has the largest cardinality (number of vertices), denoted by αkn. By definition, the independence number of network Gn, n≥1, is αn=max{α0n,α1n}.

The two quantities α0n and α1n can be evaluated by using the self-similar structure of the network.

Similarly we can prove Eq. (2), the graphical representation of which is shown in Fig. 4.  □

Proof.   We prove this lemma by mathematical induction on n. For n=2, we obtain α12=2, α02=3 by hand. Thus, the basis step holds immediately.

In an analogous way, we obtain relation

The independence number of network Gn, n≥1, is

Proof.   Lemma 2.2 indicates that any maximum independent vertex set of Gn contains no hub vertices. By Eq. (3), we obtain

Considering the initial condition α1=1, the above equation is solved to give the result.  □

The largest number of vertices in an independent vertex set of Gn, n≥2, which contains exactly 1 hub vertex, is

which together with the boundary condition α12=2 is solved to yield Eq. (7).  □

For network Gn, n≥2, there is a unique maximum independent set.

Theorem 2.5 indicates that the pseudofractal scale-free web is a unique independence graph.

Both the number of vertices and the number of edges in the Sierpiński gasket Sn are the same as those for the scale-free network Gn, which are equal to Nn=(3n+3)/2 and En=3n, respectively.

In contrast to the inhomogeneity of Gn, the Sierpiński gasket is homogeneous. The degree of vertices in Sn is equal to 4, except the topmost vertex An, the leftmost vertex Bn, and the rightmost vertex Cn, the degree of which is 2. These three vertices with degree 2 are called outmost vertices hereafter.

Analogously to the scale-free network Gn, the Sierpiński gasket also exhibits the self-similar property, which suggests an alternative construction way of the graph. Given the nth generation graph Sn, the (n+1)th generation graph Sn+1 can be obtained by amalgamating three copies of Sn at their outmost vertices, see Fig. 6. Let S(θ)n, θ=1,2,3, represent three copies of Sn. And denote the three outmost vertices of S(θ)n by A(θ)n, B(θ)n, and C(θ)n, respectively. Then, Sn+1 can be obtained by coalescing S(θ)n, θ=1,2,3, with A(1)n, B(2)n, and C(3)n being the outmost vertices An+1, Bn+1, and Cn+1 of Sn+1.

For any integer n≥3, the following relations hold.

Proof.   We prove this lemma by induction.

Theorems 2.3 and Theorem 3.3 show that the independence number of the Sierpiński gasket Sn is larger than the one corresponding to the pseudofracal scale-free web Gn, with the former being as half as the latter for large n.

3.3 The number of maximum independent sets

For n≥2, the number of maximum independent sets of the Sierpiński gasket Sn is 23n−2−12.

We first prove Eq. (13). By definition, xn is the number of different maximum independent sets for Sn, each of which contains all the three outmost vertices of Sn. According to Lemma 3.2 and Fig. 10, the two configurations in Fig. 10 which maximize α3n+1 (and thus αn+1) are when S(θ)n, θ=1,2,3, contains exactly one outmost vertex and when it contains the three outmost vertices. Then, we can establish Eq. (13) by using the rotational symmetry of the Sierpiński gasket.

This work is supported by the National Natural Science Foundation of China under Grant No. 11275049.