Increasing the Reusability of Enforcers with Lifecycle Events

Runtime enforcement can be effectively used to improve the reliability of software applications. However, it often requires the definition of ad hoc policies and enforcement strategies, which might be expensive to identify and implement. This paper discusses how to exploit lifecycle events to obtain useful enforcement strategies that can be easily reused across applications, thus reducing the cost of adoption of the runtime enforcement technology. The paper finally sketches how this idea can be used to define libraries that can automatically overcome problems related to applications misusing them. 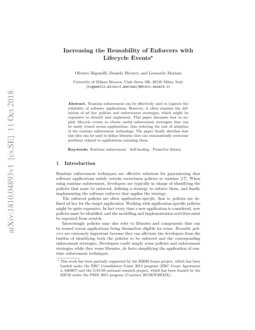 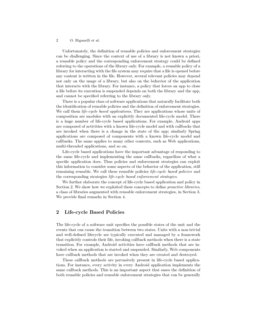 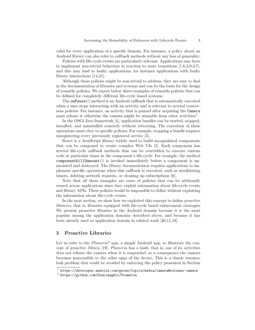 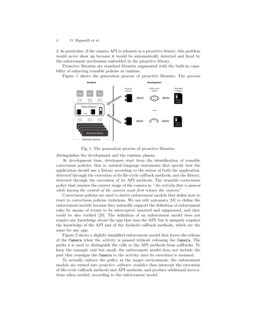 On the Implementation of Behavior Trees in Robotics

There is a growing interest in Behavior Trees (BTs) as a tool to describ...
Michele Colledanchise, et al. ∙

The Role of Models and Megamodels at Runtime

Sentinel: A Hyper-Heuristic for the Generation of Mutant Reduction Strategies

Runtime enforcement techniques are effective solutions for guaranteeing that software applications satisfy certain correctness policies at runtime [17]. When using runtime enforcement, developers are typically in charge of identifying the policies that must be enforced, defining a strategy to enforce them, and finally implementing the software enforcer that applies the strategy.

Interestingly policies may also refer to libraries and components that can be reused across applications being themselves eligible for reuse. Reusable policies are extremely important because they can alleviate the developers from the burden of identifying both the policies to be enforced and the corresponding enforcement strategies. Developers could simply reuse policies and enforcement strategies while they reuse libraries, de facto simplifying the application of runtime enforcement techniques.

Unfortunately, the definition of reusable policies and enforcement strategies can be challenging. Since the context of use of a library is not known a priori, a reusable policy and the corresponding enforcement strategy could be defined referring to the operations of the library only. For example, a reusable policy of a library for interacting with the file system may require that a file is opened before any content is written in the file. However, several relevant policies may depend not only on the usage of a library, but also on the behavior of the application that interacts with the library. For instance, a policy that forces an app to close a file before its execution is suspended depends on both the library and the app, and cannot be specified referring to the library only.

We further elaborate the concept of life-cycle based application and policy in Section 2. We show how we exploited these concepts to define proactive libraries, a class of libraries augmented with reusable enforcement strategies, in Section 3. We provide final remarks in Section 4.

The life-cycle of a software unit specifies the possible states of the unit and the events that can cause the transition between two states. Units with a non-trivial and well-defined lifecycle are typically executed and managed by a framework that explicitly controls their life, invoking callback methods when there is a state transition. For example, Android activities have callback methods that are invoked when an application is started and suspended. Similarly, Web components have callback methods that are invoked when they are created and destroyed.

Policies with life-cycle events are particularly relevant. Applications may have to implement non-trivial behaviors in reaction to state transitions [1, 6, 2, 9, 3, 7], and this may lead to faulty applications, for instance applications with faulty library interactions [14, 21].

Although these policies might be non-trivial to address, they are easy to find in the documentation of libraries and systems and can be the basis for the design of reusable policies. We report below three examples of reusable policies that can be defined for completely different life-cycle based systems.

The onPause() method is an Android callback that is automatically executed when a user stops interacting with an activity and is relevant to several correctness policies. For instance, an activity that is paused after acquiring the Camera must release it otherwise the camera might be unusable from other activities111https://developer.android.com/guide/topics/media/camera#release-camera.

In the OSGi Java framework [4], application bundles can be started, stopped, installed, and uninstalled remotely without rebooting. The execution of these operations must obey to specific policies. For example, stopping a bundle requires unregistering every previously registered service [3].

React is a JavaScript library widely used to build encapsulated components that can be composed to create complex Web UIs [5]. Each component has several life-cycle callback methods that can be overridden to execute custom code at particular times in the component’s life-cycle. For example, the method componentWillUnmount() is invoked immediately before a component is unmounted and destroyed. The library documentation requires applications to implement specific operations when this callback is executed, such as invalidating timers, deleting network requests, or cleaning up subscriptions [6].

In the next section, we show how we exploited this concept to define proactive libraries, that is, libraries equipped with life-cycle based enforcement strategies We present proactive libraries in the Android domain because it is the most popular among the application domains described above, and because it has been already used as application domain in related work [20, 11, 18].

Let us refer to the Plumeria222https://github.com/DonLiangGit/Plumeria app, a simple Android app, to illustrate the concept of proactive library [19]. Plumeria has a fault, that is, one of its activities does not release the camera when it is suspended, as a consequence the camera becomes inaccessible to the other apps of the device. This is a classic resource leak problem that could be avoided by enforcing the policy presented in Section 2. In particular, if the camera API is released as a proactive library, this problem would never show up because it would be automatically detected and fixed by the enforcement mechanism embedded in the proactive library.

Proactive libraries are standard libraries augmented with the built-in capability of enforcing reusable policies at runtime.

The process distinguishes the development and the runtime phases.

At development time, developers start from the identification of reusable correctness policies, that is, natural language statements that specify how the application should use a library according to the status of both the application, detected through the execution of its life-cycle callback methods, and the library, detected through the execution of its API methods. The reusable correctness policy that ensures the correct usage of the camera is: “An activity that is paused while having the control of the camera must first release the camera.”

To actually enforce the policy in the target environment, the enforcement models are turned into proactive software modules that intercept the execution of life-cycle callback methods and API methods, and produce additional invocations when needed, according to the enforcement model.

The language and frameworks to implement the proactive modules and the policy enforcer depend on the target environment. In the case of Android, we use the Java Xposed framework [8], which allows to cost-efficiently intercept method invocations and change the behavior of an Android app using run-time hooking and code injection mechanisms.

Research on runtime enforcement has already delivered boththeoretical [16, 10, 12, 17] and practical results [15, 11, 13, 19]. However, identifying policies, specifying enforcement strategies, and implementing the corresponding enforcers is still a difficult and time consuming task. Reusable policies, as discussed in this paper, can relieve developers from this tedious and error-prone task, facilitating reuse and easing the practical adoption of the runtime enforcement technology.