This report describes our submission to the ISIC 2017 Challenge in Skin Lesion Analysis Towards Melanoma Detection. We have participated in the Part 3: Lesion Classification with a system for automatic diagnosis of nevus, melanoma and seborrheic keratosis. Our approach aims to incorporate the expert knowledge of dermatologists into the well known framework of Convolutional Neural Networks (CNN), which have shown impressive performance in many visual recognition tasks. In particular, we have designed several networks providing lesion area identification, lesion segmentation into structural patterns and final diagnosis of clinical cases. Furthermore, novel blocks for CNNs have been designed to integrate this information with the diagnosis processing pipeline. 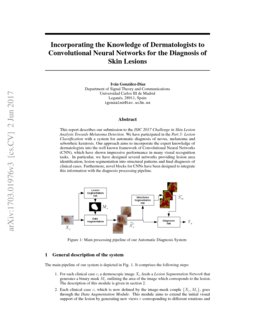 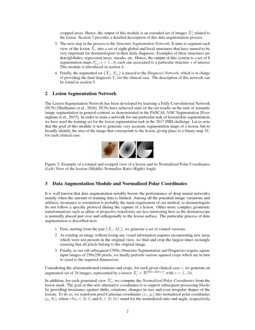 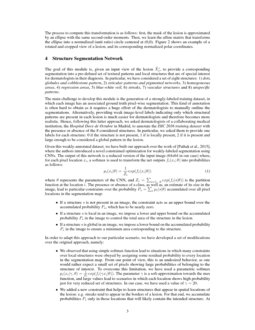 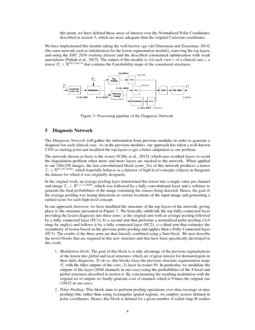 In this study, we investigate what a practically useful approach is in o...
Haofu Liao, et al. ∙

This is the final report of the collaborative research project diagnoseI...
Christoph Heger, et al. ∙

Because of their state-of-the-art performance in computer vision, CNNs a...
Pieter Van Molle, et al. ∙

1 General description of the system

The main pipeline of our system is depicted in Fig. 1. It comprises the following steps:

The Lesion Segmentation Network has been developed by learning a Fully Convolutional Network (FCN) (Shelhamer et al., 2016). FCNs have achieved state-of-the-art results on the task of semantic image segmentation in general-content, as demonstrated in the PASCAL VOC Segmentation (Everingham et al., 2015). In order to train a network for our particular task of lesion/skin segmentation, we have used the training set for the lesion segmentation task in the 2017 ISBI challenge. Let us note that the goal of this module is not to generate very accurate segmentation maps of a lesion, but to broadly identify the area of the image that corresponds to the lesion, giving place to a binary map Mc for each clinical case.

It is well known that data augmentation notably boosts the performance of deep neural networks, mainly when the amount of training data is limited. Among all the potential image variations and artifacts, invariance to orientation is probably the main requirement of our method, as dermatologists do not follow a specific protocol during the capture of a lesion. Other more complex geometric transformations such as affine or projective transforms are less interesting here as the dermatoscope is normally placed just over and orthogonally to the lesion surface. The particular process of data augmentation is described next:

Considering the aforementioned rotations and crops, for each given clinical case c

, we generate an augmented set of 24 images, represented by a tensor

In addition, for each generated view ~Xcv, we compute the Normalized Polar Coordinates from the lesion mask. The goal of this new alternative coordinates is to support subsequent processing blocks by providing invariance against shifts, rotations, changes in size and even irregular shapes of the lesions. To do so, we transform pixel Cartesian coordinates (xi,yi) into normalized polar coordinates (ρi,θi), where rhoi∈[0,1] and θi∈[0,2π)

stand for the normalized ratio and angle, respectively. The process to compute this transformation is as follows: first, the mask of the lesion is approximated by an ellipse with the same second-order moments. Then, we learn the affine matrix that transforms the ellipse into a normalized (unit ratio) circle centered at (0,0). Figure

2 shows an example of a rotated and cropped view of a lesion, and its corresponding normalized polar coordinates.

The goal of this module is, given an input view of the lesion ~Xcv, to provide a corresponding segmentation into a pre-defined set of textural patterns and local structures that are of special interest for dermatologists in their diagnosis. In particular, we have considered a set of eight structures: 1) dots, globules and cobblestone pattern, 2) reticular patterns and pigmented networks, 3) homogeneous areas, 4) regression areas, 5) blue-white veil, 6) streaks, 7) vascular structures and 8) unspecific patterns.

The main challenge to develop this module is the generation of a strongly-labeled training dataset, in which each image has an associated ground truth pixel-wise segmentation. This kind of annotation is often hard to obtain as it requires a huge effort of the dermatologists to manually outline the segmentations. Alternatively, providing weak image-level labels indicating only which structural patterns are present in each lesion is much easier for dermatologists and therefore becomes more realistic. Hence, following this latter approach, we asked dermatologists of a collaborating medical institution, the Hospital Doce de Octubre in Madrid, to annotate the ISIC 2016 training dataset with the presence or absence of the 8 considered structures. In particular, we asked them to provide one labels for each structure: 0 if the structure is not present, 1 if is locally present, 2 if it is present and large enough to be considered a global pattern in the lesion.

Given this weakly-annotated dataset, we have built our approach over the work of (Pathak et al., 2015), where the authors introduced a novel constrained optimization for weakly-labeled segmentation using CNNs. The output of this network is a reduced version of the input image (64x64 in our case) where, for each pixel location xi, a softmax is used to transform the net outputs fi(xi;θ) into probabilities as follows:

where θ represents the parameters of the CNN, and Zi=∑s=1...8exp(fi(s|θ)) is the partition function at the location i

. The presence or absence of a class, as well as, an estimate of its size in the image, lead to particular constraints over the probability

Ps=∑ipi(s|θ) accumulated over all pixel locations in the segmentation map:

In order to adapt this approach to our particular scenario, we have developed a set of modifications over the original approach, namely:

We have implemented this module taking the well-known vgg-vdd (Simonyan and Zisserman, 2014) (the same network used as initialization for the lesion segmentation module), removing the top layers, and using the ISIC 2016 training dataset and the described constrained optimization with weak annotations (Pathak et al., 2015). The output of this module is, for each view v of a clinical case c, a tensor Scv∈R64×64×8 that contains the 8 probability maps of the considered structures.

The Diagnosis Network will gather the information from previous modules in order to generate a diagnose for each clinical case. As in the previous modules, our approach has taken a well-known CNN as starting point and modified the top layers to get a better adaptation to our problem.

The network chosen as basis is the resnet-50 (He et al., 2015), which uses residual layers to avoid the degradation problem when more and more layers are stacked to the network. When applied to our 256x256 images, the last convolutional block (conv_5x) of this network produces a tensor Tc∈R8×8×2048

, which hopefully behaves as a detector of high level concepts (objects in Imagenet, the dataset for which it was originally designed).

In the original work, an average pooling layer transformed this tensor into a single-value per channel and image Ts∈R1×1×2048, which was followed by a fully convolutional layer and a softmax to generate the final probabilities of the image containing the classes being detected. Hence, the goal of the average pooling was fusing detections at various locations of the input image and generating a unified score for each high-level concept.

In our approach, however, we have modified the structure of the top layers of the network, giving place to the structure presented in Figure 3. We basically subdivide the top fully-connected layer providing the lesion diagnosis into three arms: a) the original arm with an average pooling followed by a fully connected layer (FC1), b) a second arm that performs a normalized polar pooling (3x6 rings by angles) and follows it by a fully connected layer (FC2), c) a third arm that estimates the asymmetry of lesion based on the previous polar pooling and applies then a Fully Connected layer (FC3). The results of the three arms are then linearly combined using a Sum block. We next describe the novel blocks that are required in this new structure and that have been specifically developed in this work:

As shown in the Figure 3, we combine these modules to generate a final output Ycv for each considered view of a clinical case.

Finally, in order to generate a final output for each clinical case Yc, we consider independence between views leading to a factorization:

It is also worth noting that our final submission has also incorporated in the factorization an extra classifier which depends only on external information about the clinical case, such as patient gender and age, and lesion area.

The code that implements this paper as well as the Lesion Segmentation and Diagnosis Networks are provided in the following link: https://github.com/igondia/matconvnet-dermoscopy.

We kindly thank dermatologists of Hospital 12 de Octubre of Madrid because of their inestimable help annotating the data contents with the weak labels of structural patterns. This work was supported in part by the National Grant TEC2014-53390-P and National Grant TEC2014-61729-EXP of the Spanish Ministry of Economy and Competitiveness. In addition, we gratefully acknowledge the support of NVIDIA Corporation with the donation of the TITAN X GPU used for this research.