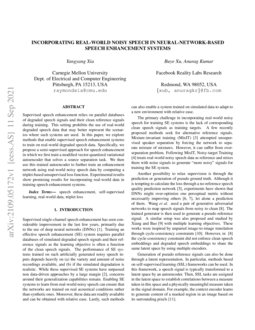 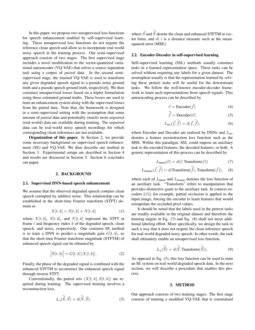 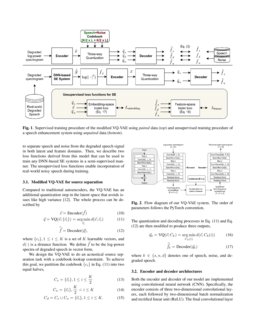 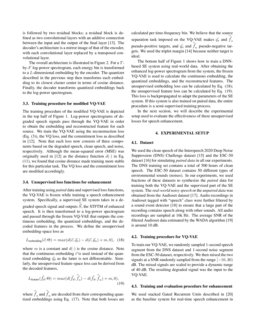 Supervised single-channel speech enhancement has seen considerable improvement in the last few years, primarily due to the use of deep neural networks (DNNs) [17]. Training an effective se system requires parallel databases of simulated degraded speech signals and their reference signals as the learning objective is often a function of the clean speech signals. The performance of se systems trained on such artificially generated noisy speech inputs depends heavily on (a) the variety and amount of noise recordings available, and (b) if the simulated degradation is realistic. While these supervised se systems have surpassed non data-driven approaches by a large margin [8], concerns around their generalization capabilities remain. Enabling SE systems to learn from real-world noisy speech can ensure that the networks are trained on real acoustical conditions rather than synthetic ones. Moreover, these data are readily available and can be obtained with relative ease. Lastly, such methods can also enable a system trained on simulated data to adapt to a new environment.

Another possibility to relax supervision is through the prediction or generation of pseudo ground truth. Although it is tempting to calculate the loss through a no-reference speech quality prediction network [1], experiments have shown that dnns might over-optimize one perceptual metric without necessarily improving others [9, 21], let alone a prediction of them. Wang et al.

[16]. The trained generator is then used to generate a pseudo reference signal. A similar setup was also proposed and studied by Xiang and Bao [20]

with multiple learning objectives. These studies were inspired by unpaired image-to-image translation through cycle-consistency constraints

Generation of pseudo reference signals can also be done through a latent representation. In particular, methods based on ssl frameworks can be used. In this framework, a speech signal is typically transformed to a latent space by an autoencoder. Then, ssl tasks are assigned in the latent space to establish correlations between a measure taken in this space and a physically meaningful measure taken in the signal domain. For example, the context encoder learns to generate content of a masked region in an image based on its surrounding pixels [10].

data. In the second semi-supervised stage, the learned vqvae is used to transform any given degraded speech signal to a pseudo noise ground truth and a pseudo speech ground truth, respectively. We then construct unsupervised losses based on a triplet formulation using these estimated ground truths. These losses are used to train an enhancement system along with the supervised losses from the paired data. Note that, the framework is designed in a semi-supervised setting with the assumption that some amount of

paired data and potentially (much) more unpaired (real-world) data are available during training. The unpaired data can be real-world noisy speech recordings for which corresponding clean references are not available.

Organization of this paper. In Section 2, we provide some necessary background on supervised se and vqvae. We then describe our method in Section 3. Experimental setups are described in Section 4 and results are discussed in Section 5. Section 6 concludes our paper.

We assume that the observed degraded speech contains clean speech corrupted by additive noise. This relationship can be established in the stft domain as

where X[t,k], S[t,k], and N[t,k] represent the stft at frame t and frequency index k of the degraded speech, clean speech, and noise, respectively. One common se method is to train a dnn to predict a magnitude gain G[t,k], so that the stftm of enhanced speech signal can be obtained by

Finally, the phase of the degraded signal is combined with the enhanced stftm to reconstruct the enhanced speech signal through inverse stft.

Conventionally, the paired sets (X[t,k],S[t,k]) are required during training. The supervised training involves a reconstruction loss,

where →S and ˆ→S denote the clean and enhanced stftm in vector form, and d(⋅) is a distance measure such as the mse.

Self-supervised learning (SSL) methods usually construct tasks in a learned representation space. These tasks can be solved without requiring any labels for a given dataset. The assumption usually is that the representation learned by solving these pretext tasks will be useful for the downstream tasks. We follow the well-known encoder-decoder framework to learn such representations from speech signals. This autoencoding process can be described by

where Encoder and Decoder are realized by dnns and Lrec

denotes a feature reconstruction loss function such as the mse. Within this paradigm, ssl could impose an auxiliary task to the encoded features, the decoded features, or both. A generic representation of this process can be described by

where each of Llatent and Lfeature denotes the loss function of an auxiliary task. “Transform” refers to manipulation that provides distinctive goals to the auxiliary task. In context encoders [10], for example, partial occlusion is applied to the input image, forcing the encoder to learn features that would extrapolate the occluded pixel values.

It should be noted that the labels used in the pretext tasks are readily available in the original dataset and therefore the training targets in Eq. (7) and Eq. (8) shall not incur additional labeling effort. More specifically, we shall design the task in such a way that it does not require the clean reference speech for real-world degraded noisy speech. This task shall ultimately enable an unsupervised loss function,

As opposed to Eq. (3), this loss function can be used to train an se system on real-world degraded speech data. In the next section, we will describe a procedure that enables this process.

Our approach consists of two training stages. The first stage consists of training a modified vqvae that is constrained to separate speech and noise from the degraded speech signal in both latent and feature domains. Then, we describe two loss functions derived from this model that can be used to train any dnn-based se systems in a semi-supervised manner. The unsupervised loss functions enable incorporation of real-world noisy speech during training.

Compared to traditional autoencoders, the vqvae has an additional quantization step in the latent space that avoids issues like high variance

[15]. The whole process can be described by

where {ci},1≤i≤K is a set of K learnable vectors, and d(⋅) is a distance function. We define →f to be the log-power spectra of degraded speech in vector form.

We design the vqvae to do an acoustical source separation task with a codebook-lookup constraint. To achieve this goal, we partition the codebook {ci} in Eq. (11) into two equal halves,

The quantization and decoding processes in Eq. (11) and Eq. (12) are then modified to produce three outputs,

where k∈{s,n,d} denotes one of speech, noise, and degraded speech.

The training procedure of the modified vqvae is depicted in the top half of Figure 1. Log-power spectrograms of degraded speech signals pass through the vqvae in order to obtain the embedding and reconstructed feature for each source. We train the vqvae using the reconstruction loss in Eq. (3), the VQ loss, and the commitment loss as described in [15]. Note that each loss now consists of three components based on the degraded speech, clean speech, and noise, respectively. Although the mse was originally used in [15] as the distance function d(⋅) in Eq. (11), we found that cosine distance made training more stable for this particular task. The VQ loss and the commitment loss are modified accordingly.

After training using paired data and supervised loss functions, the vqvae is frozen while training a speech enhancement system. Specifically, a supervised se system takes in a degraded speech signal and outputs ˆ→S, the stftm of enhanced speech. It is then transformed to a log-power spectrogram and passed through the frozen vqvae that outputs the continuous embedding, the quantized embeddings, and the decoded features in the process. We define the unsupervised embedding-space loss as

where m is a constant and d(⋅) is the cosine distance. Note that the continuous embedding →e is used instead of the quantized embedding →qd as the latter is not differentiable. Similarly, the unsupervised feature-space loss can be derived from the decoded features,

where ˆ→fs and ˆ→fn are decoded from their corresponding quantized embeddings using Eq. (17). Note that both losses are calculated per time-frequency bin. We believe that the source separation task imposed on the vqvae makes →qs and ˆ→fs pseudo-positive targets, and →qn and ˆ→fn pseudo-negative targets. We used the triplet margin [14] because neither target is ideal.

The bottom half of Figure 1 shows how to train a dnn-based se system using real-world data. After obtaining the enhanced log-power spectrogram from the system, the frozen vqvae is used to calculate the continuous embedding, the quantized embeddings, and the reconstructed features. The unsupervised embedding loss can be calculated by Eq. (18); the unsupervised feature loss can be calculated by Eq. (19

). This loss is backpropagated to adapt the parameters of the se system. If this system is also trained on paired data, the entire procedure is a semi-supervised training process.

In the next section, we will describe the experimental setup used to evaluate the effectiveness of these unsupervised losses for se.

We used the clean speech of the Interspeech 2020 Deep Noise Suppression (DNS) Challenge dataset [12] and the ESC-50 dataset [11] for simulating paired data in all our experiments. The DNS training set contains a total of 500 hours of clean speech. The ESC-50 dataset contains 50 different types of environmental sounds (noises). In our experiments, we used fractions of these datasets to synthesize the paired data for training both the vqvae and the supervised part of the se system. The real-world noisy speech or the unpaired data was obtained from the Audioset dataset [3]. Audio recordings in Audioset tagged with “speech” class were further filtered by a sound event detector [6] to ensure that a large part of the recording contains speech along with other sounds. All audio recordings are sampled at 16k Hz. The average SNR of the filtered Audioset data estimated by the WADA algorithm [5] is around 10 dB.

4.3 Training and evaluation procedure for enhancement

To evaluate the quality of enhanced speech signals, we used the perceptual evaluation of speech quality (PESQ) [13] and scale-invariant signal-to-distortion ratio (SI-SDR) [7] metrics.

5.1 Effect of the amount of paired data

As Figure 3 and Figure 4 revealed that 20% of supervised data is the minimum from our setting that the se systems start benefitting from unsupervised loss functions, we present the detailed evaluation across noise conditions in Table 2. Results show that the paired-embedding loss is the best across most SNR conditions. The paired-feature loss is slightly more superior under some unseen noise types. The unpaired loss functions had more impact at higher SNRs. We believe that this could be because the filtered Audioset has relatively high SNR.

To verify that the source separation task imposed on the vqvae was effective, we present the averaged triplet margin calculated on the validation set in Figure 5. As defined in Eq. (18), the margin should be high when global SNR is low, and the margin should be low when global SNR is high. As Figure 5 shows, using 10% and 20% supervised data were not enough to learn the correct relationship. While using 30% supervised data worked, using 40% data made a more drastic improvement. This shows that the more training data the better the vqvae learns the ssl tasks, which in turn would improve the quality of unsupervised losses for se.

In this paper, we introduced two novel unsupervised loss functions for speech enhancement that were enabled by a modified vector-quantized variational autoencoder and a self-supervised learning task. We showed that the loss functions calculated on supervised data were able to improve supervised speech enhancement systems when the amount of training data is small. We also showed that the loss functions calculated on real-world noisy speech data were able to improve the supervised se systems in some noise conditions. In the future, we plan on fine-tuning the vqvae on enhanced speech data. We will also explore sampling techniques of real-world data to better match the evaluation condition.