Speaker recognition is a popular topic in biometric authentication and many deep learning approaches have achieved extraordinary performances. However, it has been shown in both image and speech applications that deep neural networks are vulnerable to adversarial examples. In this study, we aim to exploit this weakness to perform targeted adversarial attacks against the x-vector based speaker recognition system. We propose to generate inaudible adversarial perturbations achieving targeted white-box attacks to speaker recognition system based on the psychoacoustic principle of frequency masking. Specifically, we constrict the perturbation under the masking threshold of original audio, instead of using a common l_p norm to measure the perturbations. Experiments on Aishell-1 corpus show that our approach yields up to 98.5 retaining indistinguishable attribute to listeners. Furthermore, we also achieve an effective speaker attack when applying the proposed approach to a completely irrelevant waveform, such as music. 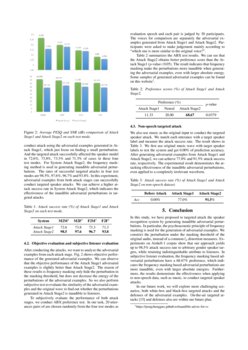 in computer vision tasks, which show that a certain network is vulnerable to a crafted small perturbation in the training set. Goodfellow

proposed an effective approach, fast gradient-sign method (FGSM), to generate adversarial examples through the linearization of the loss function. Since then, various experimental results have shown that adversarial examples can successfully influence a variety of models

[carlini2018audio], Carlini et al. demonstrated the effectiveness of targeted audio adversarial examples on a end-to-end ASR system. With optimization-based attacks, they were able to turn any audio waveform into any target transcription. Instead of using a lp norm to measure the maximum perturbation introduced as above, Schönherr et al. [schonherr2018adversarial] introduced a new type of adversarial examples based on psychoacoustic hiding and attacked the Kaldi ASR system [povey2011kaldi] successfully. Next, Qin et al. [qin2019imperceptible] extended this idea and developed effectively imperceptible audio adversarial examples by leveraging the psychoacoustic principle of auditory masking.

In speaker recognition area, adversarial examples could also be used to attack and to defend the system. In [kreuk2018fooling], Kreuk et al. used adversarial examples for fooling a speaker verification (SV) system by adding a peculiar noise to the original speaker examples. In our previous work [wang2019adversarial], we added adversarial perturbations on feature-level to conduct a non-targeted attack to SV system. We also explored using adversarial examples for model regularization and improved the robustness of the SV system. Xie et al. [xie2020real] made the DNN based speaker recognition system can identify the speaker as any target label by adding audio-agnostic universal perturbations on speakers’ voice input. In [li2020universal], Li et al.

proposed to generate universal adversarial perturbations (UAPs) by learning the mapping from the low-dimensional normal distribution to the universal perturbation subspace via a generative model. However, the aforementioned adversarial examples are mostly restricted to make a slight change of original signal in audio sampling points, without considering the human perceptibility of sound.

In this study, we were inspired by the work in [schonherr2018adversarial, qin2019imperceptible] and propose to generate inaudible adversarial perturbations for targeted attacking speaker recognition directly on wave-level. We use the structure of the x-vector speaker recognition system proposed in [snyder2018x] as our baseline to conduct targeted white-box attacks. To generate the inaudible adversarial perturbations, we adopt the frequency masking concept where one faint but audible sound becomes inaudible in the presence of another louder audible sound. Our experimental results based on Aishell-1 [bu2017aishell] corpus demonstrate that the inaudible adversarial perturbations can achieve better targeted attack performance than previous lp norm based adversarial examples. To further compare the frequency masking based approach with previous ones, we also evaluate them from both subjective and objective metrics. Results show that the adversarial perturbations generated by proposed methods are more inaudible, even with larger absolute energy. Finally, we attempt to conduct targeted attacks using the music portion of the MUSAN corpus [snyder2015musan], which is a completely irrelevant non-speech dataset. Experiments show that even non-speech can also achieve a high speaker attack success rate.

The rest of the paper is organized as follows. In Section 2, we detail the generation of the inaudible adversarial perturbations. In Section 3, we describe the experimental setup. Experimental results and analysis are presented in Section 4. We conclude in Section 5.

In this section, we introduce how we generate the inaudible perturbations that can conduct targeted speaker attacks. Figure 1 shows an overview of the generation of adversarial examples base on frequency masking.

is the loss function. The hyperparameter

ϵ is used to control the maximum perturbation generated.

Our goal is to generate indistinguishable adversarial perturbations in the human perceptibility of audio, instead of maintaining a slight noise to the clean speech sample points. In order to achieve that, we utilize the idea of frequency masking, which refers to the phenomenon that one faint but audible sound (the maskee) becomes inaudible in the presence of another louder audible sound (the masker) [lin2015principles]. Therefore, we can modify adversarial perturbations to be inaudible, as long as the perturbation falls under the masking threshold of the original speech. In [lin2015principles], Lin et al. investigated the algorithm of computing masking threshold, which consists of 3 steps.

In order to obtain the frequency masking threshold of the original speech, raw audio signals from the time domain are first converted into time-frequency representations by short-time Fourier transform (STFT). The output of STFT

sx(k) refers the k-th bin of the spectrum at frame x. Then, the power spectral density (PSD) of sx(k) can be computed as

After that, the PSD estimate

Px(k) is normalized to a sound pressure level (SPL) of 96 dB,

Secondly, they should be larger than the absolute threshold of hearing (ATH),

Finally, any group of maskers should keep a maximum amplitude within 0.5 Bark (a psychoacoustically-motivated frequency scale) and only the masker with the highest SPL is retained,

Since the masking effect is additive in the logarithmic domain, the SPL of each masker can be further smoothed by

Given an input speech x, its label speaker y, an arbitrary target speaker label y′, where y≠y′, and a well-trained x-vector speaker recognition model f(⋅), the additional loss function to modify the perturbation fall under the masking threshold can be defined as

where ¯¯¯¯Pδ(k) means the normalized PSD estimated of δ at the k-th frequency bin. The inaudible adversarial perturbation δ can be generated by

where LCE aims to make the adversarial examples fool the well-trained speaker recognition system into predicting an arbitrary target label and the LTH constrains the normalized PSD estimate of perturbation to be inaudible. The α is a hyper-parameters to scale different losses.

The whole optimization procedure is separated into two stages. In Attack Stage1, we focus on finding a relative small perturbation using a common lp norm based algorithm as defined in Eq. (1). The δ is initialized to a zero vector and ϵ is gradually reduced from a large value. For each iteration, δ is updated by

In Attack Stage2, we further optimize above perturbation by introducing frequency masking based loss as defined in Eq. (11). The α starts from 0.05 and adaptively updated based on the performance of attack. For each iteration, δ is updated to be inaudible through:

Besides, we use the music portion of MUSAN [snyder2015musan] corpus as our non-speech dataset, which consists of western art music (e.g., Baroque, Romantic, and Classical) and popular genres (e.g., jazz, bluegrass, hip-hop, etc). We randomly choose 200 pieces of western art music and cut them into 1000 pieces of 6 seconds short segments. This subset is used as the original wave to attack the selected male target speakers.

We use x-vector system [snyder2018x] as our baseline. The 30-dimensional Mel-frequency cepstral coefficients (MFCC) features are extracted as the input for all experiments. The configuration of x-vector network is exactly the same as in [snyder2018x]

: a 5-layer TDNN with ReLU followed by batch normalization is used for extracting frame-level hidden features. The number of hidden nodes is 512 and the dimension of frame-level hidden features for pooling is 1500. Each frame-level feature is generated from a 15-frame context of acoustic features. Pooling layer aggregates frame-level features, followed by 2 fully-connected layers with ReLU activation functions, batch normalization, and a Softmax output layer. The EER of the x-vector baseline system is 4.27%. Note that we use the whole sentence as input instead of using chunks as in

[snyder2018x], because we need to compute the gradient w.r.t the sentence-level perturbation.

We first compute the STFT of original speech to get the time-frequency representations. The window type of STFT is the modified Hann window with a length of 2048 and a hop length of 512. In Attack Stage1, the learning rate lr1 is set to be 100 and the δ will be updated 3000 times for each mini-batch. We use the l∞ norm to measure the perturbation bound. The ϵ starts from 2000 and will multiply 0.8 when attacking successfully. In Attack Stage2, the learning rate lr2 is 1 and the total training step for each mini-batch is 1000. The scale parameter α begins with 0.05 and will increase to 1.2α when attacking successfully or decrease to 0.8α

when fails. All systems are implemented using PyTorch

and signal-to-noise ratio (SNR) are also computed to measure the distortion of generated adversarial examples. Finally, we also conduct a subjective evaluation to evaluate the adversarial examples from the human perceptibility of audio. successfully.

To subjectively evaluate the performance of both attack stages, we conduct ABX preference test. In our task, 20 utterances pairs of are chosen randomly from the four test modes as evaluation speech and each pair is judged by 30 participants. The voices for comparison are separately the adversarial examples generated from Attack Stage1 and Attack Stage2. Participants were asked to make judgement mainly according to “which one is more similar to the original voice?”.

Table 2 summarizes the ABX test results. We can see that the Attack Stage2 obtains better preference score than the Attack Stage1 (p-value<0.05). The result indicates that frequency masking make the perturbations more inaudible when generating the adversarial examples, even with larger absolute energy. Some samples of generated adversarial examples can be found on this website111https://pengchengguo.github.io/inaudible-advex-for-sv.

We also use music as the original input to conduct the targeted speaker attack. We match each utterance with a target speaker label and measure the attack success rate. The result shows in Table 3. We first use original music wave with target speaker labels to test the system and get 0.00% of prediction accuracy. After generating adversarial examples from Attack Stage1 and Attack Stage2, we can achieve 77.0% and 91.5% attack success rate, respectively. The experimental result demonstrates the attacking effectiveness of the inaudible adversarial perturbations, even applied to a completely irrelevant waveform.

In this study, we have proposed to targeted attack the speaker recognition system by generating inaudible adversarial perturbations. In particular, the psychoacoustic principle of frequency masking is used for the generation of adversarial examples. We constrict the perturbation under the masking threshold of the original audio, instead of a common lp distortion measures. Experiments on Aishell-1 corpus show that our approach yields up to 98.5% attack success rate to arbitrary gender speaker targets, while retaining indistinguishable attribute to listeners. In subjective listener evaluation, the frequency masking based adversarial perturbations have a 68.67% preference, which indicates the frequency masking based adversarial perturbations are more inaudible, even with larger absolute energies. Furthermore, the results demonstrate the effectiveness when applying to non-speech data, such as music, to conduct targeted speaker attacks.