Recently, string kernels have obtained state-of-the-art results in various text classification tasks such as Arabic dialect identification or native language identification. In this paper, we apply two simple yet effective transductive learning approaches to further improve the results of string kernels. The first approach is based on interpreting the pairwise string kernel similarities between samples in the training set and samples in the test set as features. Our second approach is a simple self-training method based on two learning iterations. In the first iteration, a classifier is trained on the training set and tested on the test set, as usual. In the second iteration, a number of test samples (to which the classifier associated higher confidence scores) are added to the training set for another round of training. However, the ground-truth labels of the added test samples are not necessary. Instead, we use the labels predicted by the classifier in the first training iteration. By adapting string kernels to the test set, we report significantly better accuracy rates in English polarity classification and Arabic dialect identification. 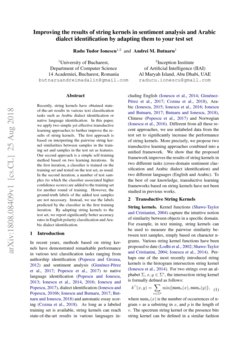 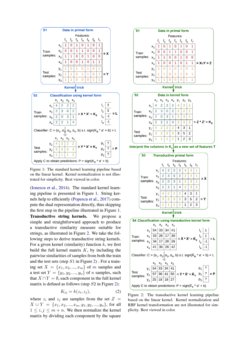 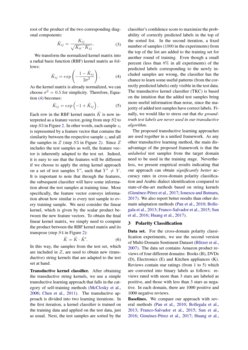 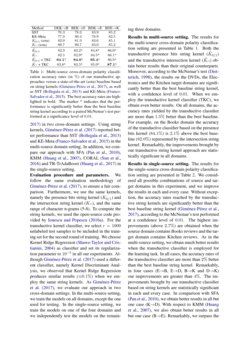 For many text classification tasks, there is a major problem posed by th...
Radu Tudor Ionescu, et al. ∙

In this work, we present an approach based on combining string kernels a...
Mădălina Cozma, et al. ∙

Can string kernels pass the test of time in Native Language Identification?

In this paper, we address the problems of Arabic Text Classification and...
Attia Nehar, et al. ∙

UnibucKernel Reloaded: First Place in Arabic Dialect Identification for the Second Year in a Row

We present a machine learning approach that ranked on the first place in...
Andrei M. Butnaru, et al. ∙

where numv(x) is the number of occurrences of n-gram v as a substring in x, and p is the length of v. The spectrum string kernel or the presence bits string kernel can be defined in a similar fashion Ionescu et al. (2014). The standard kernel learning pipeline is presented in Figure 1. String kernels help to efficiently Popescu et al. (2017) compute the dual representation directly, thus skipping the first step in the pipeline illustrated in Figure 1.

Transductive string kernels. We propose a simple and straightforward approach to produce a transductive similarity measure suitable for strings, as illustrated in Figure 2. We take the following steps to derive transductive string kernels. For a given kernel (similarity) function k, we first build the full kernel matrix K, by including the pairwise similarities of samples from both the train and the test sets (step S1 in Figure 2) . For a training set X={x1,x2,...,xm} of m samples and a test set Y={y1,y2,...,yn} of n samples, such that X∩Y=∅, each component in the full kernel matrix is defined as follows (step S2 in Figure 2):

where zi and zj are samples from the set Z=X∪Y={x1,x2,...,xm,y1,y2,...,yn}, for all 1≤i,j≤m+n. We then normalize the kernel matrix by dividing each component by the square root of the product of the two corresponding diagonal components:

As the kernel matrix is already normalized, we can choose σ2=0.5 for simplicity. Therefore, Equation (4) becomes:

Each row in the RBF kernel matrix ~K

is now interpreted as a feature vector, going from step

S2 to step S3 in Figure 2. In other words, each sample zi is represented by a feature vector that contains the similarity between the respective sample zi and all the samples in Z (step S3 in Figure 2). Since Z includes the test samples as well, the feature vector is inherently adapted to the test set. Indeed, it is easy to see that the features will be different if we choose to apply the string kernel approach on a set of test samples Y′, such that Y′≠Y. It is important to note that through the features, the subsequent classifier will have some information about the test samples at training time. More specifically, the feature vector conveys information about how similar is every test sample to every training sample. We next consider the linear kernel, which is given by the scalar product between the new feature vectors. To obtain the final linear kernel matrix, we simply need to compute the product between the RBF kernel matrix and its transpose (step S4 in Figure 2):

In this way, the samples from the test set, which are included in Z, are used to obtain new (transductive) string kernels that are adapted to the test set at hand.

Transductive kernel classifier. After obtaining the transductive string kernels, we use a simple transductive learning approach that falls in the category of self-training methods McClosky et al. (2006); Chen et al. (2011)

. The transductive approach is divided into two learning iterations. In the first iteration, a kernel classifier is trained on the training data and applied on the test data, just as usual. Next, the test samples are sorted by the classifier’s confidence score to maximize the probability of correctly predicted labels in the top of the sorted list. In the second iteration, a fixed number of samples (

1000 in the experiments) from the top of the list are added to the training set for another round of training. Even though a small percent (less than 8% in all experiments) of the predicted labels corresponding to the newly included samples are wrong, the classifier has the chance to learn some useful patterns (from the correctly predicted labels) only visible in the test data. The transductive kernel classifier (TKC) is based on the intuition that the added test samples bring more useful information than noise, since the majority of added test samples have correct labels. Finally, we would like to stress out that the ground-truth test labels are never used in our transductive algorithm.

The proposed transductive learning approaches are used together in a unified framework. As any other transductive learning method, the main disadvantage of the proposed framework is that the unlabeled test samples from the target domain need to be used in the training stage. Nevertheless, we present empirical results indicating that our approach can obtain significantly better accuracy rates in cross-domain polarity classification and Arabic dialect identification compared to state-of-the-art methods based on string kernels Giménez-Pérez et al. (2017); Ionescu and Butnaru (2017). We also report better results than other domain adaptation methods Pan et al. (2010); Bollegala et al. (2013); Franco-Salvador et al. (2015); Sun et al. (2016); Huang et al. (2017).

Data set. For the cross-domain polarity classification experiments, we use the second version of Multi-Domain Sentiment Dataset Blitzer et al. (2007). The data set contains Amazon product reviews of four different domains: Books (B), DVDs (D), Electronics (E) and Kitchen appliances (K). Reviews contain star ratings (from 1 to 5) which are converted into binary labels as follows: reviews rated with more than 3 stars are labeled as positive, and those with less than 3 stars as negative. In each domain, there are 1000 positive and 1000 negative reviews.

Evaluation procedure and parameters. We follow the same evaluation methodology of franco-EACL-2017, to ensure a fair comparison. Furthermore, we use the same kernels, namely the presence bits string kernel (K0/1) and the intersection string kernel (K∩), and the same range of character n-grams (5-8). To compute the string kernels, we used the open-source code provided by radu-marius-book-chap6-2016. For the transductive kernel classifier, we select r=1000

unlabeled test samples to be included in the training set for the second round of training. We choose Kernel Ridge Regression

Shawe-Taylor and Cristianini (2004) as classifier and set its regularization parameter to 10−5 in all our experiments. Although franco-EACL-2017 used a different classifier, namely Kernel Discriminant Analysis, we observed that Kernel Ridge Regression produces similar results (±0.1%) when we employ the same string kernels. As franco-EACL-2017, we evaluate our approach in two cross-domain settings. In the multi-source setting, we train the models on all domains, except the one used for testing. In the single-source setting, we train the models on one of the four domains and we independently test the models on the remaining three domains.

Results in single-source setting. The results for the single-source cross-domain polarity classification setting are presented in Table 2. We considered all possible combinations of source and target domains in this experiment, and we improve the results in each and every case. Without exception, the accuracy rates reached by the transductive string kernels are significantly better than the best baseline string kernel Giménez-Pérez et al. (2017), according to the McNemar’s test performed at a confidence level of 0.01. The highest improvements (above 2.7%) are obtained when the source domain contains Books reviews and the target domain contains Kitchen reviews. As in the multi-source setting, we obtain much better results when the transductive classifier is employed for the learning task. In all cases, the accuracy rates of the transductive classifier are more than 2% better than the best baseline string kernel. Remarkably, in four cases (E→B, E→D, B→K and D→K) our improvements are greater than 4%. The improvements brought by our transductive classifier based on string kernels are statistically significant in each and every case. In comparison with SFA Pan et al. (2010), we obtain better results in all but one case (K→D). With respect to KMM Huang et al. (2007), we also obtain better results in all but one case (B→E). Remarkably, we surpass the other state-of-the-art approaches Sun et al. (2016); Huang et al. (2017) in all cases.

Baseline. We choose as baseline the approach of Radu-Andrei-ADI-2017, which is based on string kernels and multiple kernel learning. The approach that we consider as baseline is the winner of the 2017 ADI Shared Task Zampieri et al. (2017). In addition, we also compare with the second-best approach (Meta-classifier) Malmasi and Zampieri (2017).

Evaluation procedure and parameters. Radu-Andrei-ADI-2017 combined four kernels into a sum, and used Kernel Ridge Regression for training. Three of the kernels are based on character n-grams extracted from ASR transcripts. These are the presence bits string kernel (K0/1), the intersection string kernel (K∩), and a kernel based on Local Rank Distance (KLRD) Ionescu (2013). The fourth kernel is an RBF kernel (Kivec) based on the i-vectors provided with the ADI data set Ali et al. (2016). In our experiments, we employ the exact same kernels as Radu-Andrei-ADI-2017 to ensure an unbiased comparison with their approach. As in the polarity classification experiments, we select r=1000 unlabeled test samples to be included in the training set for the second round of training the transductive classifier, and we use Kernel Ridge Regression with a regularization of 10−5 in all our ADI experiments.

Results. The results for the cross-domain Arabic dialect identification experiments on both the development and the test sets are presented in Table 3. The domain-adapted sum of kernels obtains improvements above 0.8% over the state-of-the-art sum of kernels Ionescu and Butnaru (2017). The improvement on the development set (from 64.17% to 65.42%) is statistically significant. Nevertheless, we obtain higher and significant improvements when we employ the transductive classifier. Our best accuracy is 66.73% (2.56% above the baseline) on the development set and 78.35% (2.08% above the baseline) on the test set. The results show that our domain adaptation framework based on string kernels attains the best performance on the ADI Shared Task data set, and the improvements over the state-of-the-art are statistically significant, according to the McNemar’s test.