Improving the Annotation of DeepFashion Images for Fine-grained Attribute Recognition 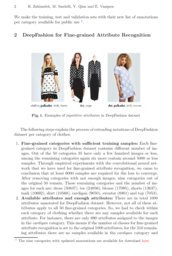 Multi-label attribute recognition of an item (such as a single instance of a bird, a car or a dress) at a fine-grained level includes retrieving the detailed attributes which describe that item, for instance a dress can be labelled for its pattern (e.g. striped), length (e.g. maxi), fabric (e.g. chiffon), etc. There are very few publicly available datasets which provide such detailed annotations including CUB200 Birds [1], DeepFashion [2] and some face datasets such as LFW [3].

DeepFashion dataset is mostly used for clothes recognition task, it contains over 200k images from 50 categories of clothes including Dress, Kimono, Shorts, etc. There are overall 1000 attributes describing images at a fine-grained level. However, not all of these categories, by themselves, contain enough images to train a fine-grained attribute recognition model. Further, not all of the 1000 attributes apply to images in every category. To this end, in this paper, we focus on nine relatively large categories of DeepFashion dataset and by removing the scare attributes and merging the visually similar ones will make these nine categories of clothes more suitable for the fine-grained attribute recognition task. We make the training, test and validation sets with their new list of annotations per category available for public use 111The nine categories with updated annotations are available for download here..

The following steps explain the process of extending notations of DeepFashion dataset per category of clothes:

on the ImageNet dataset

[7] only for initializing the convolutional layers. Then we truncate the model at the last convolutional layer after the non-linearities and generate β by projecting a copy of the feature map (α) into a 20 dimensional ICA projection space [9] (which is generated beforehand based on the feature maps from the same dataset). Then, the sum of the outer product of α and β at each location is calculated which is passed through a fully connected layer. The loss function used is the smooth pairwise ranking loss function proposed by [6]. The number of labels is different depending on the category, for instance there are 35 attributes for blouse category after merging the duplicates. The reason to choose FineTag architecture for our experiment is that it requires much less parameters to train compared to very deep networks like VGG16 but can produce results with the same precision score. Depending on the number of attributes this model is about 40× smaller than VGG16 in terms of parameters.

We trained the model for each of the nine categories mentioned above twice: before and after merging the repetitive attributes. The model is built on Tensorflow framework and the experiments are run on an NVIDIA Tesla V100 GPU. For each category the model is trained in average for 30 epochs with the batch size of 40 using Adam optimizer

In Table 1 for each category, we are reporting the results for the ranking-based average precision [11] and the weighted mean average precision [12, 13] weighting by the frequency of instances per label before and after removing the duplicates (denoted as AvgPrec_b, AvgPrec_a, wmap_b and wmap_a respectively) . We can see that there is significant improvements in the results just by merging the duplicated attributes similar to those in Figure 1.

Table 2 shows the weighted mean average precision score for two selected pairs of duplicate attributes per category (depending on the category the number of duplicate pairs vary, here we have chosen two pairs per category for demonstration). The categories are grouped based on the common attributes (shorts category has only one pair of repetitive attributes) and the merged attribute for each pair is indicated by adding an _m and in bold. We can see that the results per attribute improve significantly by merging the duplicate annotations in the dataset. Further, before merging the duplicates one of the attributes in the duplicate pair is often learned and extracted very poorly by the network which results in a low mean average precision score over the whole dataset. For instance, the printed label for the tee category in Table 2 is recognized by the network with a very low score of 0.06 and is improved significantly (to printed_m with 0.54 precision score) after being merged with the print attribute. It is important to notice that per attribute precision scores are significantly important for retrieval applications where the query has a specific attribute that we are interested in. For instance, in case of querying a striped dress we can see that the improved score of striped_m could enhance the search results significantly.

In this paper, we extracted nine categories of clothes from the DeepFashion dataset which provide sufficient samples and comprehensive annotations for fine-grained attribute recognition. Further, we showed merging duplicate attributes for DeepFashion improves the attribute recognition results over the samples and per attribute. This is mainly because duplicate attributes contribute to poor annotation of the images and one of the two repetitive attributes is always under-sampled which results in poor overall results.