This paper presents our latest investigations on improving automatic speech recognition for noisy speech via speech enhancement. We propose a novel method named Multi-discriminators CycleGAN to reduce noise of input speech and therefore improve the automatic speech recognition performance. Our proposed method leverages the CycleGAN framework for speech enhancement without any parallel data and improve it by introducing multiple discriminators that check different frequency areas. Furthermore, we show that training multiple generators on homogeneous subset of the training data is better than training one generator on all the training data. We evaluate our method on CHiME-3 data set and observe up to 10.03 and up to 14.09 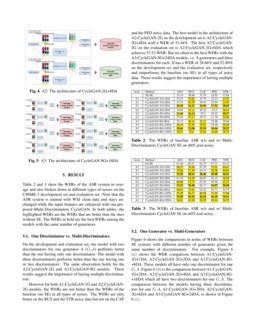 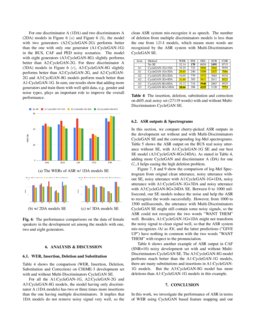 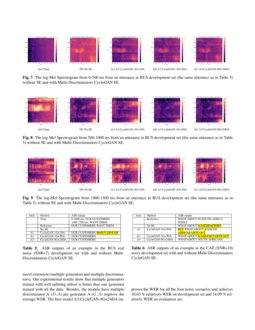 In this paper, we explore an improved framework to train a monoaural neu...
Jisi Zhang, et al. ∙

. It has been widely used as a pre-processing in speech-related applications such as automatic speech recognition (ASR). In the past years, deep learning has been employed in single-channel SE and has achieved great success. Some works proposed deep learning based mask to filter out the noise on noisy input features

[17, 20, 21]. However, the mask approach is based on unrealistic presumption: the noise is strictly additive and the scale of the masked signal is the same as the clean target. Therefore, the feature mapping approach was introduced to deal with that problem by training a mapping network that direct transforms the noisy features to the clean ones [23, 13, 14, 4, 22, 2].

Generative Adversarial Network (GAN) [7], Adversarial Training [5] and Cycle-Consistent Adversarial Networks (CycleGAN) [25] have drawn attention in the deep learning community since they demonstrate better generalization by using discriminator network to encourage the model to produce noise-invariant features in order to ease the mismatch issue between source and target domain. These approaches have also applied to SE [11, 15, 16]. Meng et al [16] proposed cycle-consistent speech enhancement (CSE) and adversarial cycle-consistent speech enhancement (ACSE) models in which an additional inverse mapping network is introduced to reconstruct the noisy features from the enhanced ones. Furthermore, a cycle-consistent constraint is enforced to minimize the reconstruction loss. CSE and ACSE models are designed for both, training with parallel and non-parallel data. The main difference between CSE and ACSE architecture is that ACSE used two discriminator networks to distinguish the enhanced and noised features from the noisy and clean features [16]. Evaluated on the CHiME-3 dataset, the CSE model achieves reasonable relative word error rate (WER) improvement, while the ACSE model, which is trained with unparalleled data, is less effective.

[3]. GMAN seems to produce higher quality samples in a fraction of the iterations when measured by a pairwise GAM-type metric [3]. Hosseini-Asl et al [9] proposed a Multi-Discriminators CycleGAN (MD-CycleGAN), similar to generative multi-adversarial network (GMAN), for unsupervised non-parallel speech domain adaptation. The MD-CycleGAN model employs multiple independent discriminators on the power spectrogram, each in charge of different frequency bands [9]. It demonstrates the effectiveness of MD-CycleGAN method on CTC End-to-End ASR with gender adaptation [24]. However, the input and the generated features are the power spectrogram, which is not common for the state-of-the-art ASR system (hyrid or E2E). Besides, MD-CycleGAN did not take into account the identity loss which is meaningful in non-stationary noise scenario, which we will explain it in more detail in section 2.

In this paper, we contribute to previous work in the following aspects: 1) To the best of our knowledge, we are the first to propose a novel framework based on the Multi-Discriminators generative models [3, 9] for feature mapping in speech enhancement and the feature mapping model uses the same input as ASR (log-Mel filterbank) ; 2) We propose to train multiple generators and multiple discriminators on homogeneous data to improve the WER 3) We show that our models outperform strong baselines with up to 10.03 % and up to 14.9 % relatively WER improvements on CHiME-3 development set and evaluation set without retraining the ASR system that was trained with WSJ clean data.

[25]. The mapping G_A:A→B is learnt such that the distribution of images from G_A(A) is indistinguishable from the distribution B using an adversarial loss. Because this mapping is highly under-constrained, [25] coupled it with an inverse mapping G_B:B→A and introduce a cycle consistency loss to push G_B(G_A(A))=A (and vice versa). The full objective is as follows:

where λidt and λcycle are tunable parameters. And other losses are defined as follows:

The loss functions for two discriminators

Note that the outputs of G_A(A) and G_B(B) are also called fake_B and fake_A,respectively. Compared with the objective of ACSE model [16], the main difference is that ACSE does not take into account the identity loss as shown in equations (4) and (5). However, the noise does not constantly occur in every frame in the non-stationary noise scenario. Therefore, adding identity loss to the objective could benefit the model to generate original frame when the input feature is in the output domain. That is, G_A(B)=B and G_B(A)=A.

Figure 1 shows the network architecture of CycleGAN for converting a noisy signal to a clean signal. A and B are the domain of noisy signal and clean signal, respectively. The two generators are G_A:A→B and G_B:B→A. The goal of the two discriminators (D_A and D_B) is to predict whether the sample is from the actual distribution ( ‘real’) or produced by the generator (‘fake’) given the feature input .

The model is based on Multi-Discriminators generative models [3, 9] and CycleGAN [25]. Based on equation (2), the loss function for generator G_A is formed of the prediction of discriminator D_A. That is to say, if the discriminator is imperfect, then it can not guide the generator to the optimal area during the training. Therefore, we propose to strengthen the complexity of the discriminator by introducing multiple discriminators, e.g. D_A1 and D_A2, to judge the G_A(A) (a.k.a fake_B) as shown in Figure 2. Each discriminator is responsible for a subregion of the log Mel-filterbank feature. The full objective is the same as equation (1), but the equation (2) is adapted to

Where n is the total number of discriminators to judge G_A output. The loss function for each discriminator in equation (8) is adapted to

Furthermore, we can even increase the number of generators and therefore the number of discriminators by dividing the training data in different homogeneous subsets, e.g. by splitting the data by genders and by types of noises.

default recipe to train HMM-GMM model to get alignment, and then we train the time delay neural network (TDNN) network

[18] with the augmented features (speed and volume perturbed). The input feature consists of 40-bin log-Mel filterbank and 100-bin ivectors. In decoding stage, we use a fairly large dictionary, a trigram pruned language model and run re-scoring with fourgram language model.

The generators and discriminators are trained with 3200 hours of data containing real noisy train set (tr05_real_noisy) and clean data (tr05_orig_clean). The feature is 40-bin log-Mel filterbank using hamming window. The context window of each frame is 5, so the input size for the generator and the discriminator is (1, 11, 40). The network for the generator is 9 blocks Resnet [8]

We design three architectures in this experiment. In the first architecture (A1), we train one single generator using the Multi-Discriminators CycleGAN with all the training set as shown in Figure 3, i.e. 3200 hours of unpaired speech data coming from all genders and all different types of noises. For this generator, we train up to three discriminators, e.g. CycleGAN-1G+2DA means one generator and two discriminators.

Table 2 and 3 show the WERs of the ASR system in average and also broken down in different types of noises on the CHiME-3 development set and evaluation set. Note that the ASR system is trained with WSJ clean data and stays unchanged while the input features are enhanced with our proposed Multi-Discriminators CycleGAN. In both tables, the highlighted WERs are the WERs that are better than the ones without SE. The WERs in bold are the best WERs among the models with the same number of generators.

However for both A1:CycleGAN-1G and A2:CycleGAN-2G models, the WERs are not better than the WERs of the baseline (no SE) in all types of noises. The WERs are only better on the BUS and the STR noisy data but not on the CAF and the PED noisy data. The best model in the architecture of A2:CycleGAN-2G on the development set is A2:CycleGAN-2G+4DA with a WER of 31.44%. The best A2:CycleGAN-2G on the evaluation set is A2:CycleGAN-2G+6DA which achieves 57.53 WER. But we observe the best WERs with the A3:CycleGAN-8G+24DA models, i.e. 8 generators and three discriminators for each. It has a WER of 28.66% and 52.80% on the development set and the evaluation set, respectively and outperforms the baseline (no SE) in all types of noisy data. These results suggest the importance of having multiple generators.

Table 4 shows the comparison (WER, Insertion, Deletion, Substitution and Correction) on CHiME-3 development set with and without Multi-Discriminators CycleGAN SE.

In this section, we compare cherry-picked ASR outputs in the development set without and with Multi-Discriminators CycleGAN SE and the corresponding log-Mel spectrograms. Table 5 shows the ASR output on the BUS real noisy utterance without SE, with A1:CycleGAN-1G SE and our best SE model (A3:CycleGAN-8G+24DA). As stated in Table 4, adding more CycleGAN and discriminator A (DA) for one G_A helps easing the high deletion problem.

In this work, we investigate the performance of ASR in terms of WER using CycleGAN based feature mapping and our novel extension (multiple generators and multiple discriminators). Our experimental results show that multiple generators trained with well splitting subset is better than one generator trained with all the data. Besides, the models have multiple discriminator A (D_A) per generator A (G_A) improve the average WER. The best model A3:CycleGAN-8G+24DA improves the WER for all the four noisy scenarios and achieves 10.03 % relatively WER on development set and 14.09 % relatively WER on evaluation set.