Spectral clustering is one of the most popular clustering methods. However, the high computational cost due to the involved eigen-decomposition procedure can immediately hinder its applications in large-scale tasks. In this paper we use spectrum-preserving node reduction to accelerate eigen-decomposition and generate concise representations of data sets. Specifically, we create a small number of pseudonodes based on spectral similarity. Then, standard spectral clustering algorithm is performed on the smaller node set. Finally, each data point in the original data set is assigned to the cluster as its representative pseudo-node. The proposed framework run in nearly-linear time. Meanwhile, the clustering accuracy can be significantly improved by mining concise representations. The experimental results show dramatically improved clustering performance when compared with state-of-the-art methods. 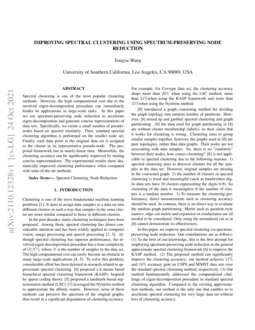 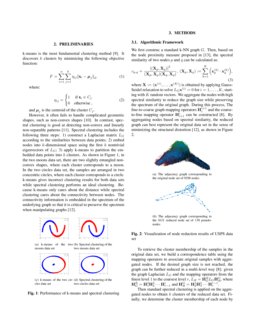 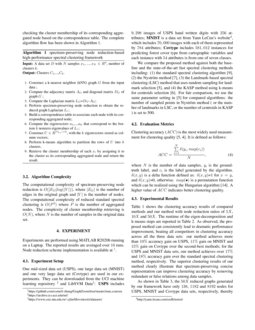 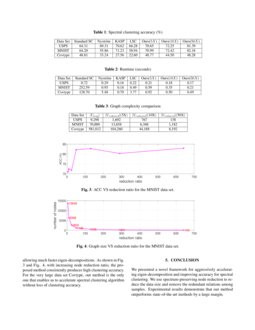 Spectral clustering is one of the most effective clustering approaches t...
Lingfei Wu, et al. ∙

Regionalization is the task of dividing up a landscape into homogeneous ...
Shuai Yuan, et al. ∙

Clustering uncertain data is an essential task in data mining for the in...
Han Liu, et al. ∙

Clustering is one of the most fundamental machine learning problems

In the past decades, many clustering techniques have been proposed. Among them, spectral clustering has drawn considerable attention and has been widely applied to computer vision, image processing and speech processing

[1, 11]. Although spectral clustering has superior performance, the involved eigen-decomposition procedure has a time complexity of O(N3), where N is the number of samples in the data set. The high computational cost can easily become an obstacle in many large-scale applications [4, 2]. To solve this problem, considerable effort has been devoted in research related to approximate spectral clustering. [13]

leveraged the Nyström method to approximate the affinity matrix. However, none of these methods can preserve the spectrum of the original graphs, thus result in a significant degradation of clustering accuracy. For example, for Covtype data set, the clustering accuracy drops more than

[14] introduced a graph coarsening method for dividing the graph topology into random number of partitions. However, [14] mixed up and garbled spectral clustering and graph partitioning. All the data used for graph partitioning in [14] are without cluster membership (labels), so their claim that it works for clustering is wrong. Clustering aims to group similar samples together, however, the graphs used in [14] are pure topologies, rather than data graphs. Their nodes are not associating with data samples. So, there is no ”similarity” between their nodes, how comes clustering? [14] is not applicable to spectral clustering due to the following reasons: 1) spectral clustering aims to discover clusters for all the samples in the data set. However, original samples are missing in the coarsened graph. 2) the number of clusters in spectral clustering is fixed and meaningful (such as handwritten digits data sets have 10 clusters representing the digits 0-9). So clustering of the data is meaningless if the number of clusters is a random number. 3) To measure the clustering performance, direct measurements such as clustering accuracy should be used. In contrast, there is no direct way to evaluate the random graph partitioning. Merits such as quotient-style metrics, edge-cut metric and expansion or conductance are all needed to be considered. Only using the normalized cut as in [14] cannot demonstrate its effectiveness.

In this paper, we improve spectral clustering via spectrum-preserving node reduction. Our contributions are as follows: (1) To the best of our knowledge, this is the first attempt for employing spectrum-preserving node reduction in the general approximate spectral clustering framework [13] to improve the KASP method. (2) The proposed method can significantly improve the clustering accuracy: our method achieves 17% and 18%

k-means is the most fundamental clustering method [10]. It discovers k clusters by minimizing the following objective function:

and μj is the centroid of the cluster Cj.

However, it often fails to handle complicated geometric shapes, such as non-convex shapes [7]. In contrast, spectral clustering is good at detecting non-convex and linearly non-separable patterns [6]. Spectral clustering includes the following three steps: 1) construct a Laplacian matrix LG according to the similarities between data points; 2) embed nodes into k-dimensional space using the first k

LG; 3) apply k-means to partition the embedded data points into k clusters. As shown in Figure 1, in the two moons data set, there are two slightly entangled non-convex shapes, where each cluster corresponds to a moon. In the two circles data set, the samples are arranged in two concentric circles, where each cluster corresponds to a circle. k-means gives incorrect clustering results for both data sets while spectral clustering performs an ideal clustering. Because k-means only cares about the distance while spectral clustering cares about the connectivity between nodes. The connectivity information is embedded in the spectrum of the underlying graph so that it is critical to preserve the spectrum when manipulating graphs [12].

We first construc a standard k-NN graph G. Then, based on the node proximity measure proposed in [5], the spectral similarity of two nodes p and q can be calculated as:

random vectors. We aggregate the nodes with high spectral similarity to reduce the graph size while preserving the spectrum of the original graph. During this process, The fine-to-coarse graph mapping operators

Hi+1i and the coarse-to-fine mapping operator Hii+1 can be constructed [14]. By aggregating nodes based on spectral similarity, the reduced graph can best represent the original data set in the sense of minimizing the structural distortion [12], as shown in Figure 2.

To retrieve the cluster membership of the samples in the original data set, we build a correspondence table using the mapping operators to associate original samples with aggregated nodes. If the desired graph size is not reached, the graph can be further reduced in a multi-level way [14]: given the graph Laplacian LG and the mapping operators from the finest level 1 to the coarsest level r, LR=HRGLGHGR, where HRG=H21H32⋯Hrr−1 and HGR=H12H23⋯Hr−1r.

Experiments are performed using MATLAB R2020b running on a Laptop. The reported results are averaged over 10 runs. Node reduction scheme implementation is available at 111https://github.com/cornell-zhang/GraphZoom/tree/master/mat_coarsen.

One mid-sized data set (USPS), one large data set (MNIST) and one very large data set (Covtype) are used in our experiments. They can be downloaded from the UCI machine learning repository 222https://archive.ics.uci.edu/ml/ and LibSVM Data333https://www.csie.ntu.edu.tw/ cjlin/libsvmtools/datasets/: USPS includes 9,298 images of USPS hand written digits with 256 attributes; MNIST is a data set from Yann LeCun’s website444 http://yann.lecun.com/exdb/mnist/, which includes 70,000 images with each of them represented by 784 attributes; Covtype includes 581,012 instances for predicting forest cover type from cartographic variables and each instance with 54 attributes is from one of seven classes.

Clustering accuracy (ACC) is the most widely used measurement for clustering quality [2, 4]. It is defined as follows:

where N is the number of data samples, yi is the ground-truth label, and ci is the label generated by the algorithm. δ(x,y) is a delta function defined as: δ(x,y)=1 for x=y, and δ(x,y)=0, otherwise. map(∙) is a permutation function which can be realized using the Hungarian algorithm [9]. A higher value of ACC indicates better clustering quality.

Table 1 shows the clustering accuracy results of compared methods and our method with node reduction ratios of 5X, 10X and 50X. The runtime of the eigen-decomposition and k-means steps are reported in Table 2. As observed, the proposed method can consistently lead to dramatic performance improvement, beating all competitors in clustering accuracy across all the three data sets: our method achieves more than 10% accuracy gain on USPS, 11% gain on MNIST and 15% gain on Covtype over the second-best methods; for the USPS and MNIST data sets, our method achieves over 17% and 18% accuracy gain over the standard spectral clustering method, respectively. The superior clustering results of our method clearly illustrate that spectrum-preserving concise representation can improve clustering accuracy by removing redundant or false relations among data samples.

As shown in Table 3, the 50X reduced graphs generated by our framework have only 138, 1182 and 8192 nodes for USPS, MNIST and Covtype data sets, respectively, thereby allowing much faster eigen-decompositions. As shown in Fig. 3 and Fig. 4, with increasing node reduction ratio, the proposed method consistently produces high clustering accuracy. For the very large data set Covtype, our method is the only one that enables us to accelerate spectral clustering algorithm without loss of clustering accuracy.

We presented a novel framework for aggressively accelerating eigen-decomposition and improving accuracy for spectral clustering. We use spectrum-preserving node reduction to reduce the data size and remove the redundant relations among samples. Experimental results demonstrate that our method outperforms state-of-the-art methods by a large margin.