We show how eye-tracking corpora can be used to improve sentence compression models, presenting a novel multi-task learning algorithm based on multi-layer LSTMs. We obtain performance competitive with or better than state-of-the-art approaches. 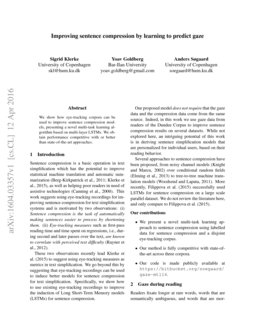 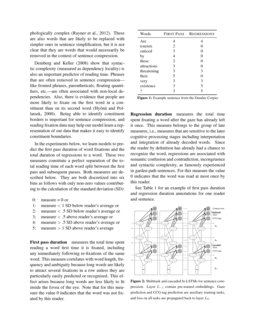 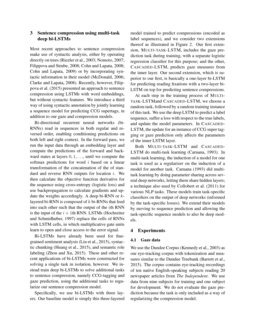 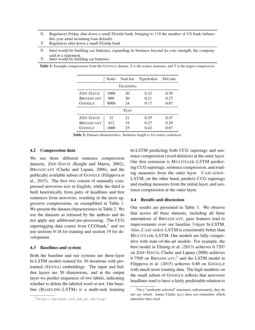 [Berg-Kirkpatrick et al.2011, Klerke et al.2015], as well as helping poor readers in need of assistive technologies [Canning et al.2000]. This work suggests using eye-tracking recordings for improving sentence compression for text simplification systems and is motivated by two observations: (i) Sentence compression is the task of automatically making sentences easier to process by shortening them. (ii) Eye-tracking measures such as first-pass reading time and time spent on regressions, i.e., during second and later passes over the text, are known to correlate with perceived text difficulty [Rayner et al.2012].

These two observations recently lead Klerke et al. Klerke:ea:15 to suggest using eye-tracking measures as metrics in text simplification. We go beyond this by suggesting that eye-tracking recordings can be used to induce better models for sentence compression for text simplification. Specifically, we show how to use existing eye-tracking recordings to improve the induction of Long Short-Term Memory models (LSTMs) for sentence compression.

Our proposed model does not require that the gaze data and the compression data come from the same source. Indeed, in this work we use gaze data from readers of the Dundee Corpus to improve sentence compression results on several datasets. While not explored here, an intriguing potential of this work is in deriving sentence simplification models that are personalized for individual users, based on their reading behavior.

Several approaches to sentence compression have been proposed, from noisy channel models [Knight and Marcu2002] over conditional random fields [Elming et al.2013] to tree-to-tree machine translation models [Woodsend and Lapata2011]. More recently, Filippova:15 successfully used LSTMs for sentence compression on a large scale parallel dataset. We do not review the literature here, and only compare to Filippova:15.

Readers fixate longer at rare words, words that are semantically ambiguous, and words that are morphologically complex [Rayner et al.2012]. These are also words that are likely to be replaced with simpler ones in sentence simplification, but it is not clear that they are words that would necessarily be removed in the context of sentence compression.

Demberg:Keller:08 show that syntactic complexity (measured as dependency locality) is also an important predictor of reading time. Phrases that are often removed in sentence compression—like fronted phrases, parentheticals, floating quantifiers, etc.—are often associated with non-local dependencies. Also, there is evidence that people are more likely to fixate on the first word in a constituent than on its second word [Hyönä and Pollatsek2000]. Being able to identify constituent borders is important for sentence compression, and reading fixation data may help our model learn a representation of our data that makes it easy to identify constituent boundaries.

In the experiments below, we learn models to predict the first pass duration of word fixations and the total duration of regressions to a word. These two measures constitute a perfect separation of the total reading time of each word split between the first pass and subsequent passes. Both measures are described below. They are both discretized into six bins as follows with only non-zero values contributing to the calculation of the standard deviation (SD):

measures the total time spent reading a word first time it is fixated, including any immediately following re-fixations of the same word. This measure correlates with word length, frequency and ambiguity because long words are likely to attract several fixations in a row unless they are particularly easily predicted or recognized. This effect arises because long words are less likely to fit inside the fovea of the eye. Note that for this measure the value 0 indicates that the word was not fixated by this reader.

measures the total time spent fixating a word after the gaze has already left it once. This measure belongs to the group of late measures, i.e., measures that are sensitive to the later cognitive processing stages including interpretation and integration of already decoded words. Since the reader by definition has already had a chance to recognize the word, regressions are associated with semantic confusion and contradiction, incongruence and syntactic complexity, as famously experienced in garden path sentences. For this measure the value 0 indicates that the word was read at most once by this reader.

See Table 1 for an example of first pass duration and regression duration annotations for one reader and sentence.

Most recent approaches to sentence compression make use of syntactic analysis, either by operating directly on trees [Riezler et al.2003, Nomoto2007, Filippova and Strube2008, Cohn and Lapata2008, Cohn and Lapata2009] or by incorporating syntactic information in their model [McDonald2006, Clarke and Lapata2008]. Recently, however, Filippova:15 presented an approach to sentence compression using LSTMs with word embeddings, but without syntactic features. We introduce a third way of using syntactic annotation by jointly learning a sequence model for predicting CCG supertags, in addition to our gaze and compression models.

Bi-directional recurrent neural networks (bi-RNNs) read in sequences in both regular and reversed order, enabling conditioning predictions on both left and right context. In the forward pass, we run the input data through an embedding layer and compute the predictions of the forward and backward states at layers

0,1,…, until we compute the softmax predictions for word i

. We then calculate the objective function derivative for the sequence using cross-entropy (logistic loss) and use backpropagation to calculate gradients and update the weights accordingly. A deep bi-RNN or

k-layered bi-RNN is composed of k bi-RNNs that feed into each other such that the output of the ith RNN is the input of the i+1th RNN. LSTMs [Hochreiter and Schmidhuber1997] replace the cells of RNNs with LSTM cells, in which multiplicative gate units learn to open and close access to the error signal.

Bi-LSTMs have already been used for fine-grained sentiment analysis

[Liu et al.2015], syntactic chunking [Huang et al.2015], and semantic role labeling [Zhou and Xu2015]. These and other recent applications of bi-LSTMs were constructed for solving a single task in isolation, however. We instead train deep bi-LSTMs to solve additional tasks to sentence compression, namely CCG-tagging and gaze prediction, using the additional tasks to regularize our sentence compression model.

Specifically, we use bi-LSTMs with three layers. Our baseline model is simply this three-layered model trained to predict compressions (encoded as label sequences), and we consider two extensions thereof as illustrated in Figure 2. Our first extension, Multi-task-LSTM

, includes the gaze prediction task during training, with a separate logistic regression classifier for this purpose; and the other,

At each step in the training process of Multi-task-LSTM and Cascaded-LSTM, we choose a random task, followed by a random training instance of this task. We use the deep LSTM to predict a label sequence, suffer a loss with respect to the true labels, and update the model parameters. In Cascaded-LSTM, the update for an instance of CCG super tagging or gaze prediction only affects the parameters of the inner LSTM layer.

Both Multi-task-LSTM and Cascaded-LSTM do multi-task learning [Caruana1993]. In multi-task learning, the induction of a model for one task is used as a regularizer on the induction of a model for another task. Caruana Caruana:93 did multi-task learning by doing parameter sharing across several deep networks, letting them share hidden layers; a technique also used by Collobert et al. Collobert:ea:11 for various NLP tasks. These models train task-specific classifiers on the output of deep networks (informed by the task-specific losses). We extend their models by moving to sequence prediction and allowing the task-specific sequence models to also be deep models.

We use the Dundee Corpus [Kennedy et al.2003] as our eye-tracking corpus with tokenization and measures similar to the Dundee Treebank [Barrett et al.2015]. The corpus contains eye-tracking recordings of ten native English-speaking subjects reading 20 newspaper articles from The Independent. We use data from nine subjects for training and one subject for development. We do not evaluate the gaze prediction because the task is only included as a way of regularizing the compression model.

. The first two consist of manually compressed newswire text in English, while the third is built heuristically from pairs of headlines and first sentences from newswire, resulting in the most aggressive compressions, as exemplified in Table

1. We present the dataset characteristics in Table 2. We use the datasets as released by the authors and do not apply any additional pre-processing. The CCG supertagging data comes from CCGbank,111http://groups.inf.ed.ac.uk/ccg/ and we use sections 0-18 for training and section 19 for development.

Our results are presented in Table 3. We observe that across all three datasets, including all three annotations of Broadcast, gaze features lead to improvements over our baseline 3-layer bi-LSTM. Also, Cascaded-LSTM is consistently better than Multitask-LSTM. Our models are fully competitive with state-of-the-art models. For example, the best model in Elming:ea:13 achieves 0.7207 on Ziff-Davis, clarke2008global achieves 0.7509 on Broadcast,222On a ”randomly selected” annotator; unfortunately, they do not say which. James Clarke (p.c) does not remember which annotator they used. and the LSTM model in Filippova:15 achieves 0.80 on Google with much more training data. The high numbers on the small subset of Google reflects that newswire headlines tend to have a fairly predictable relation to the first sentence. With the harder datasets, the impact of the gaze information becomes stronger, consistently favouring the cascaded architecture, and with improvements using both first pass duration and regression duration, the late measure associated with interpretation of content. Our results indicate that multi-task learning can help us take advantage of inherently noisy human processing data across tasks and thereby maybe reduce the need for task-specific data collection.

Yoav Goldberg was supported by the Israeli Science Foundation Grant No. 1555/15. Anders Søgaard was supported by ERC Starting Grant No. 313695. Thanks to Joachim Bingel and Maria Barrett for preparing data and for helpful discussions, and to the anonymous reviewers for their suggestions for improving the paper.