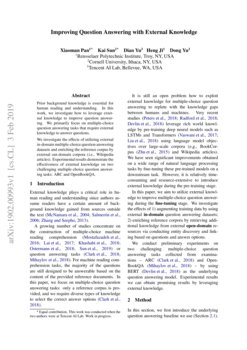 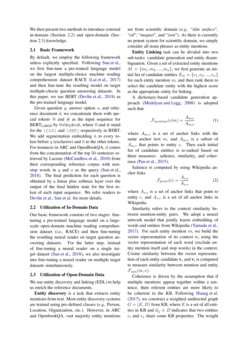 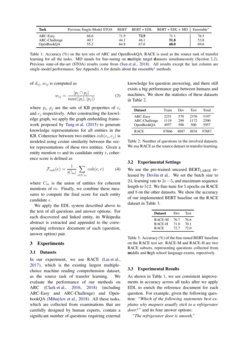 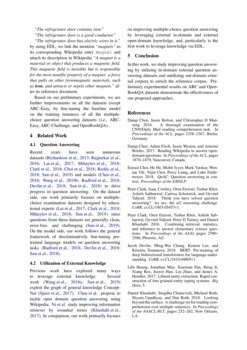 A Few More Examples May Be Worth Billions of Parameters

We investigate the dynamics of increasing the number of model parameters...
Yuval Kirstain, et al. ∙

and Wikipedia articles). We have seen significant improvements obtained on a wide range of natural language processing tasks by fine-tuning these pre-trained models on a downstream task. However, it is relatively time-consuming and resource-extensive to introduce external knowledge during the pre-training stage.

In this paper, we aim to utilize external knowledge to improve multiple-choice question answering during the fine-tuning stage. We investigate the effects of 1) augmenting training data by using external in-domain question answering datasets; 2) enriching reference corpora by retrieving additional knowledge from external open-domain resources via conducting entity discovery and linking based on questions and answer options.

By default, we employ the following framework unless explicitly specified. Following Sun et al., we first fine-tune a pre-trained language model on the largest multiple-choice machine reading comprehension dataset RACE Lai et al. (2017) and then fine-tune the resulting model on target multiple-chocie question answering datasets. In this paper, we use BERT Devlin et al. (2018) as the pre-trained language model.

Given question q, answer option o, and reference document d, we concatenate them with special tokens @ and # as the input sequence for BERTLARGE by @d#q#o#, where @ and # stand for the [CLS] and [SEP] respectively in BERT. We add segmentation embedding A to every token before q (exclusive) and B to the other tokens. For instances in ARC and OpenBookQA, d comes from the concatenation of the top 50 sentences retrieved by Lucene McCandless et al. (2010) from their corresponding reference corpus with non-stop words in q and o as the query Sun et al. (2018)

. The final prediction for each question is obtained by a linear plus softmax layer over the output of the final hidden state for the first token of each input sequence. We refer readers to

We use entity discovery and linking (EDL) to help us enrich the reference documents.

Entity Linking task can be divided into two sub-tasks: candidate generation and entity disambiguation. Given a set of extracted entity mentions M={m1,m2,...,mn}, we first generate an initial list of candidate entities Em={e1,e2,...,en} for each entity mention m, and then rank them to select the candidate entity with the highest score as the appropriate entity for linking.

where Am,∗ is a set of anchor links with the same anchor text m, and Am,e is a subset of Am,∗ that points to entity e. Then each initial list of candidate entities is re-ranked based on three measures: salience, similarity, and coherence Pan et al. (2015).

Similarity refers to the context similarity between mention-entity pairs. We adopt a neural network model that jointly learns embedding of words and entities from Wikipedia

, we build the vector representation of its context

ve and vt is computed to measure similarity between mention and entity Fsim(m,e).

Coherence is driven by the assumption that if multiple mentions appear together within a sentence, their referent entities are more likely to be coherent in the KB. Following Huang2017, we construct a weighted undirected graph G=(E,D) from KB, where E is a set of all entities in KB and dij∈D indicates that two entities ei and ej share some KB properties. The weight of dij, wij is computed as

where pi, pj are the sets of KB properties of ei and ej

respectively. After constructing the knowledge graph, we apply the graph embedding framework proposed by tang2015line to generate knowledge representations for all entities in the KB. Coherence between two entities

coh(ei,ej) is modeled using cosine similarity between the vector representations of these two entities. Given a entity mention m and its candidate entity e, coherence score is defined as

where Cm is the union of entities for coherent mentions of m. Finally, we combine these measures to compute the final score for each entity candidate e.

We apply the EDL system described above to the text of all questions and answer options. For each discovered and linked entity, its Wikipedia abstract is extracted and appended to the corresponding reference document of each (question, answer option) pair.

In our experiment, we use RACE Lai et al. (2017), which is the existing largest multiple-choice machine reading comprehension dataset, as the source task of transfer learning. We evaluate the performance of our methods on ARC Clark et al. (2016, 2018) (including ARC-Easy and ARC-Challenge) and OpenbookQA Mihaylov et al. (2018). All these tasks, which are collected from examinations that are carefully designed by human experts, contain a significant number of questions requiring external knowledge for question answering, and there still exists a big performance gap between humans and machines. We show the statistics of these datasets in Table 2.

We use the pre-trained uncased BERTLARGE released by Devlin et al.. We set the batch size to 24, learning rate to 2e−5, and maximum sequence length to 512. We fine-tune for 5epochs on RACE and 8 on the other datasets. We show the accuracy of our implemented BERT baseline on the RACE dataset in Table 3.

As shown in Table 1, we see consistent improvements in accuracy across all tasks after we apply EDL to enrich the reference document for each question. For example, given the following question: “Which of the following statements best explains why magnets usually stick to a refrigerator door?” and its four answer options:

“The refrigerator door is smooth.”

“The refrigerator door is a good conductor.”

“The refrigerator door has electric wires in it.”

by using EDL, we link the mention “magnets” to its corresponding Wikipedia entry Magnet and attach its description in Wikipedia “A magnet is a material or object that produces a magnetic field. This magnetic field is invisible but is responsible for the most notable property of a magnet: a force that pulls on other ferromagnetic materials, such as iron, and attracts or repels other magnets.” after its reference document.

Based on our preliminary experiments, we see further improvements on all the datasets except ARC-Easy, by fine-tuning the baseline model on the training instances of all the multiple-choice question answering datasets (i.e., ARC-Easy, ARC-Challenge, and OpenBookQA).

a.1 Engineering Details of the Strong Systems Used for Comparison

When we were in the middle of paper preparation, to make a competitive comparison, we put semi-complex engineering effort into making strong systems for ARC-Challenge, ARC-Easy, and OpenBookQA. These systems employed the approach of concurrently fine-tuning on multiple target datasets (Section 2.2), system ensembles based on a generalization of reading strategies Sun et al. (2018), and different pre-trained language models Radford et al. (2018); Devlin et al. (2018). We describe their details in this section.

a.1.2 Settings for Each Tasks