The performance of a Multiobjective Evolutionary Algorithm (MOEA) is crucially dependent on the parameter setting of the operators. The most desired control of such parameters presents the characteristic of adaptiveness, i.e., the capacity of changing the value of the parameter, in distinct stages of the evolutionary process, using feedbacks from the search for determining the direction and/or magnitude of changing. Given the great popularity of the algorithm NSGA-II, the objective of this research is to create adaptive controls for each parameter existing in this MOEA. With these controls, we expect to improve even more the performance of the algorithm. In this work, we propose an adaptive mutation operator that has an adaptive control which uses information about the diversity of candidate solutions for controlling the magnitude of the mutation. A number of experiments considering different problems suggest that this mutation operator improves the ability of the NSGA-II for reaching the Pareto optimal Front and for getting a better diversity among the final solutions. 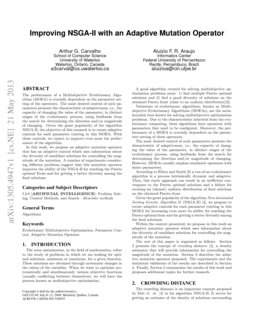 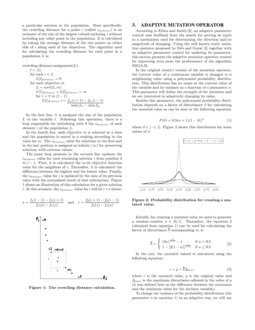 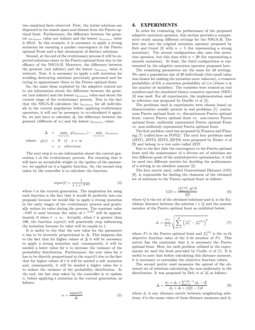 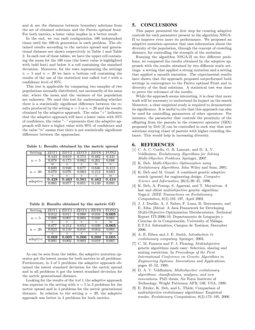 The term optimization, in the field of mathematics, refers to the study of problems in which we are looking for optimal solutions, minimum or maximum, for a given function. These solutions are obtained through systematic changes in the values of the variables. When we want to optimize systematically and simultaneously various objective functions (usually conflicting between themselves), we will have the process known as multiobjective optimization.

A good algorithm created for solving multiobjective optimization problems must: 1) find multiple Pareto optimal solutions and 2) find a good diversity of solutions on the obtained Pareto front (close to an uniform distribution)

Variations of evolutionary algorithms, known as Multiobjective Evolutionary Algorithms (MOEAs), are the metaheuristic best known for solving multiobjective optimization problems. Due to the characteristics inherited from the evolutionary computing, these algorithms have operators with parameters that need to be configured. Moreover, the performance of a MOEA is crucially dependent on the parameter setting of these operators.

The most desired control of such parameters presents the characteristic of adaptiveness, i.e., the capacity of changing the value of the parameter, in distinct stages of the evolutionary process, using feedbacks from the search for determining the direction and/or magnitude of changing. However, MOEAs usually employs stochastic operators with static parameters.

According to Eiben and Smith [6] a run of an evolutionary algorithm is a process intrinsically dynamic and adaptive. Then, this static approach can result in an inefficient convergence to the Pareto optimal solutions and a failure for creating an (almost) uniform distribution of final solutions on the obtained Pareto front.

Given the great popularity of the algorithm

(NSGA-II) [4], we propose to create adaptive controls for each parameter existing in this MOEA for increasing even more its ability for reaching the Pareto optimal front and for getting a better diversity among the final solutions.

Within the context presented, we propose in this work an adaptive mutation operator which uses information about the diversity of candidate solutions for controlling the magnitude of the mutation.

The rest of this paper is organized as follows. Section 2 presents the concept of crowding distance [4]

, a density estimator that will provide information for controlling the magnitude of the mutation. Section 3 describes the adaptive mutation operator proposed. The experiments and the statistical validation of the results are described in Section 4. Finally, Section 5 summarizes the results of this work and proposes additional topics for further research.

In the fourth line, each objective m is selected at a time and the population is sorted in a ranking according to the value for m. The idistance value for solutions in the first and in the last position is assigned as infinity (∞) for preserving solutions with extreme values.

According to Eiben and Smith [6], an adaptive parameter control uses feedback from the search for serving as input to a mechanism used for determining the direction and/or magnitude of changing. Using the well known static mutation operator proposed by Deb and Goyal [3] together with an adaptive parameter control for updating its parameter, this section presents the adaptive mutation operator created for improving even more the performance of the algorithm NSGA-II.

n. This parameter will define the strength of the mutation and we are interested in adaptively changing its value.

Besides this parameter, the polynomial probability distribution depends on a factor of disturbance δ for calculating the mutated value as can be seen in the following equation:

where δ∈[−1,1]. Figure 2 shows this distribution for some values of n.

Initially, for creating a mutated value we need to generate a random number u∈[0,1]. Thereafter, the equation 2 (obtained from equation 1) can be used for calculating the factor of disturbance ¯¯¯δ corresponding to u:

In the end, the mutated valued is calculated using the following equation:

where c is the mutated value, p is the original value and Δmax is the maximum disturbance allowed in the value of p (it was defined here as the difference between the maximum and the minimum value for the decision variable).

To change the variance of the probability distribution (the parameter n in equation 1) in an adaptive way, we will use two empirical facts observed. First, the initial solutions are dispersed in the search space and distant from the Pareto optimal front. Furthermore, the difference between the greatest idistance value not infinite and the lowest idistance value is lifted. In this scenario, it is necessary to apply a strong mutation for ensuring a quicker convergence to the Pareto optimal Front and a fast attainment of distinct solutions.

Second, at the end of the evolutionary process it will be expected solutions closer to the Pareto optimal front due to the efficacy of the NSGA-II. Moreover, the difference between the greatest (not infinite) and the lowest idistance value is reduced. Now, it is necessary to apply a soft mutation for avoiding destroying solutions previously generated and for trying to approximate them to the Pareto optimal front.

So, the main ideas exploited by the adaptive control are to use information about the difference between the greatest (not infinite) and the lowest idistance value and about the current stage of the evolutionary process. Due to the fact that the NSGA-II calculates the idistance for all individuals in the current population before applying evolutionary operators, it will not be necessary to re-calculated it again. So, we just have to calculate Δ, the difference between the greatest (different of ∞) and the lowest idistance value:

The next step is to use information about the current generation t of the evolutionary process. For ensuring that it will have an acceptable weight in the update of the parameter, we applied on it a logistic function. So, the second step taken by the controller is to calculate the function:

where t is the current generation. The inspiration for using such function is the fact that it would fit perfectly into our proposal because we would like to apply a strong mutation in the early stages of the evolutionary process and gradually reduce its value during the process. The constant value −0.07 is used because the value of e−0.07t will be approximately 0 when t→∞. Actually, when t is greater than 100, the function sigm(t) will practically stop influencing the mutation because its value will be equals to 1.

The remaining parameters are the same for all settings. We used a population size of 20 individuals (this small value was chosen for making the mutation more valorous), a crossover probability of 0.9, a mutation probability of 1/n (where n is the number of variables). The variables were treated as real numbers and the simulated binary crossover operator (SBX) [3] was used. For all experiments, the implementation used as reference was proposed by Durillo et al [5].

The first problem used was proposed by Fonseca and Fleming [7] (called here as FON2). The next four problems used (ZDT1, ZDT2, ZDT3, ZDT6) were proposed by Zitzler et al [9] and belong to a test suite called ZDT.

Due to the fact that the convergence to the Pareto optimal front and the maintenance of a diverse set of solutions are two different goals of the multiobjective optimization, it will be need two different metrics for deciding the performance of a setting in an absolute manner [2].

The first metric used, called Generational Distance (GD) [8], is responsible for finding the closeness of the obtained set of solutions to the Pareto optimal front as follows:

where Q is the set of the obtained solutions and di is the Euclidean distance between the solution i∈Q and the nearest member of the Pareto optimal front as exhibited below:

where P∗ is the Pareto optimal front and f∗(k)m is the m-th objective function value of the k-th member of P∗. This metric has the constraint that it is necessary the Pareto optimal front. Here, for each problem utilized in the experiments we used the front provided by Coello et al [1]. It is useful to note that before calculating this distance measure, it is necessary to normalize the objective function values.

The second metric used measures the spread of the obtained set of solutions calculating the non-uniformity in the distribution. It was proposed by Deb et al [4] as follows:

where di is any distance metric between neighboring solutions, ¯d is the mean value of these distance measures and df and dl are the distances between boundary solutions from the set of obtained solutions and the Pareto optimal front. For both metrics, a lower value implies in a better result.

In the end, we run each configuration 100 independent times until the 100-th generation in each problem. The obtained results according to the metrics spread and generational distance are shown respectively in Table 1 and Table 2. In each row of these tables, we have the upper cell containing the mean for the 100

runs (the lower value is highlighted with bold font) and below it a cell containing the standard deviation. Moreover, for the rows representing the settings

n=5 and n=20 we have a bottom cell containing the results of the use of the statistical test called test t with a confidence level of 95%.

This test is applicable for comparing two samples of two populations normally distributed, not necessarily of the same size, where the mean and the variance of the population are unknown. We used this test for understanding whether there is a statistically significant difference between the results produced by the setting

This paper presented the first step for creating adaptive controls for each parameter present in the algorithm NSGA-II to improve even more its performance. We proposed an adaptive mutation operator that uses information about the diversity of the population, through the concept of crowding distance, for controlling the strength of the mutation.

Running the algorithm NSGA-II on five different problems, we compared the results obtained by the adaptive approach with the results obtained by two different static settings: a setting that applied a strong mutation and a setting that applied a smooth mutation. The experimental results have shown that the approach proposed outperformed both settings in convergence to the Pareto optimal Front and in diversity of the final solutions. A statistical test was done to prove the relevance of the results.

While the approach seems interesting, it is clear that more work will be necessary to understand its impact on the search. Moreover, a clear empirical study is required to demonstrate its significance. It is useful to cite that this approach can also be used for controlling parameters of other operators. For instance, the parameter that controls the proximity of the offspring from the parents in the crossover operator (SBX) proposed by Deb [3] can be controlled in such way that new solutions staying closer of parents with higher crowding distance. This would help in increasing diversity.