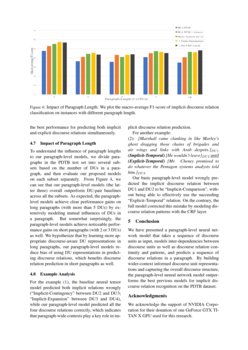 by modeling compositional meanings of two discourse units and exploiting word interactions between discourse units using neural tensor networks or attention mechanisms in neural nets. However, most of existing approaches ignore wider paragraph-level contexts beyond the two discourse units that are examined for predicting a discourse relation in between.

To further improve implicit discourse relation prediction, we aim to improve discourse unit representations by positioning a discourse unit (DU) in its wider context of a paragraph. The key observation is that semantic meaning of a DU can not be interpreted independently from the rest of the paragraph that contains it, or independently from the overall paragraph-level discourse structure that involve the DU. Considering the following paragraph with four discourse relations, one relation between each two adjacent DUs:

(1): [The Butler, Wis., manufacturer went public at $15.75 a share in August 1987,]DU1 and (Explicit-Expansion) [Mr. Sim’s goal then was a $29 per-share price by 1992.]DU2 (Implicit-Expansion) [Strong earnings growth helped achieve that price far ahead of schedule, in August 1988.]DU3 (Implicit-Comparison) [The stock has since softened, trading around $25 a share last week and closing yesterday at $23 in national over-the-counter trading.]DU4 But (Explicit-Comparison) [Mr. Sim has set a fresh target of $50 a share by the end of reaching that goal.]DU5

Abstracting latent representations from a long sequence of words, such as a paragraph, is a challenging task. While several novel neural network models Zhang et al. (2017b, a)

because of its ability in modeling long-distance dependencies between words. In addition, among four typical pooling methods (sum, mean, last and max) for calculating sentence representations from RNN-encoded hidden states for individual words, max-pooling along with bidirectional LSTM (Bi-LSTM)

In PDTB, most of discourse relations were annotated between two adjacent sentences or two adjacent clauses. For exceptional cases, we applied heuristics to convert them.

The input of the paragraph-level discourse relation prediction model is a sequence of word vectors, one vector per word in the paragraph. In this work, we used the pre-trained 300-dimension Google English word2vec embeddings

222Downloaded from https://docs.google.com/uc?id=0B7XkCwpI5KDYNlNUTTlSS21pQmM. For each word that is not in the vocabulary of Google word2vec, we will randomly initialize a vector with each dimension sampled from the range [−0.25,0.25]. In addition, recognizing key entities and discourse connective phrases is important for discourse relation recognition, therefore, we concatenate the raw word embeddings with extra linguistic features, specifically one-hot Part-Of-Speech tag embeddings and one-hot named entity tag embeddings333Our feature-rich word embeddings are of dimension 343, including 300 dimensions for word2vec embeddings + 36 dimensions for Part-Of-Speech (POS) tags + 7 dimensions for named entity tags. We used the Stanford CoreNLP to generate POS tags and named entity tags..

Given a variable-length words sequence X=(x1,x2,...,xL) in a paragraph, the word-level Bi-LSTM will process the input sequence by using two separate LSTMs, one process the word sequence from the left to right while the other follows the reversed direction. Therefore, at each word position t, we obtain two hidden states →ht,←ht. We concatenate them to get the word representation ht=[→ht,←ht]. Then we apply max-pooling over the sequence of word representations for words in a discourse unit in order to get the discourse unit embedding:

Next, the DU-level Bi-LSTM will process the sequence of discourse unit embeddings in a paragraph and generate two hidden states −−−→hDUt and ←−−−hDUt at each discourse unit position. We concatenate them to get the discourse unit representation hDUt=[−−−→hDUt,←−−−hDUt].

The Softmax Prediction Layer: Finally, we concatenate two adjacent discourse unit representations hDUt−1 and hDUt and predict the discourse relation between them using a softmax function:

3.2 Untie Parameters in the Softmax Prediction Layer (Implicit vs. Explicit)

The Conditional Random Fields Lafferty et al. (2001) (CRF) layer updates a state transition matrix, which can effectively adjust the current label depending on proceeding and following labels. Both training and decoding of the CRF layer can be solved efficiently by using the Viterbi algorithm. With the CRF layer, the model jointly assigns a sequence of discourse relations between each two adjacent discourse units in a paragraph, including both implicit and explicit relations, by considering relevant discourse unit representations as well as global discourse relation patterns.

The Penn Discourse Treebank (PDTB): We experimented with PDTB v2.0 Prasad et al. (2008b) which is the largest annotated corpus containing 36k discourse relations in 2,159 Wall Street Journal (WSJ) articles. In this work, we focus on the top-level444In PDTB, the sense label of discourse relation was annotated hierarchically with three levels. discourse relation senses which are consist of four major semantic classes: Comparison (Comp), Contingency (Cont), Expansion (Exp) and Temporal (Temp). We followed the same PDTB section partition Rutherford and Xue (2015) as previous work and used sections 2-20 as training set, sections 21-22 as test set, and sections 0-1 as development set. Table 1 presents the data distributions we collected from PDTB.

We tuned the parameters based on the best performance on the development set. We fixed the weights of word embeddings during training. All the LSTMs in our neural network use the hidden state size of 300. To avoid overfitting, we applied dropout Hinton et al. (2012)

with dropout ratio of 0.5 to both input and output of LSTM layers. To prevent the exploding gradient problem in training LSTMs, we adopt gradient clipping with gradient L2-norm threshold of 5.0. These parameters remain the same for all our proposed models as well as our own baseline models.

We chose the standard cross-entropy loss function for training our neural network model and adopted Adam Kingma and Ba (2014) optimizer with the initial learning rate of 5e-4 and a mini-batch size of 128666Counted as the number of discourse relations rather than paragraph instances.

. If one instance is annotated with two labels (4% of all instances), we use both of them in loss calculation and regard the prediction as correct if model predicts one of the annotated labels. All the proposed models were implemented with Pytorch

and converged to the best performance within 20-40 epochs.

To alleviate the influence of randomness in neural network model training and obtain stable experimental results, we ran each of the proposed models and our own baseline models ten times and report the average performance of each model instead of the best performance as reported in many previous works.

We compare the performance of our neural network model with several recent discourse relation recognition systems that only consider two relevant discourse units.

Since none of the recent previous work reported class-wise implicit relation classification performance in the multi-way classification setting, for better comparisons, we re-implemented the neural tensor network architecture (so-called SWIM in Lei et al. (2017)) which is essentially a Bi-LSTM model with tensors and report its detailed evaluation result in the multi-way classification setting. As another baseline, we report the performance of a Bi-LSTM model without tensors as well. Both baseline models take two relevant discourse units as the only input.

For additional comparisons, We also report the performance of our proposed models in the binary classification setting.

The third section of table 3 shows the multi-class classification results of our proposed paragraph-level neural network models that capture inter-dependencies among discourse units. The first row shows the performance of a variant of our basic model, where we only identify implicit relations and ignore identifying explicit relations by setting the α in equation (5) to be 0. Compared with the baseline Bi-LSTM model, the only difference is that this model considers paragraph-wide contexts and model inter-dependencies among discourse units when building representation for individual DU. We can see that this model has greatly improved implicit relation classification performance across all the four relations and improved the macro-average F1-score by over 7 percents. In addition, compared with the baseline Bi-LSTM model with tensor, this model improved implicit relation classification performance across the three small classes, with clear performance gains of around 2 and 8 percents on contingency and temporal relations respectively, and overall improved the macro-average F1-score by 2.2 percents.

The second row shows the performance of our basic paragraph-level model which predicts both implicit and explicit discourse relations in a paragraph. Compared to the variant system (the first row), the basic model further improved the classification performance on the first three implicit relations. Especially on the contingency relation, the classification performance was improved by another 1.42 percents. Moreover, the basic model yields good performance for recognizing explicit discourse relations as well, which is comparable with previous best result (92.05% macro F1-score and 93.09% accuracy as reported in Pitler et al. (2008)).

Binary Classification: From table 4, we can see that compared against the best previous systems, our paragraph-level model with untied parameters in the prediction layer achieves F1-score improvements of 6 points on Comparison and 7 points on Temporal, which demonstrates that paragraph-wide contexts are important in detecting minority discourse relations. Note that the CRF layer of the model is not suitable for binary classification.

As we explained in section 4.2, we ran our models for 10 times to obtain stable average performance. Then we also created ensemble models by applying majority voting to combine results of ten runs. From table 5, each ensemble model obtains performance improvements compared with single model. The full model achieves performance boosting of (51.84 - 48.82 = 3.02) and (94.17 - 93.21 = 0.96) in macro F1-scores for predicting implicit and explicit discourse relations respectively. Furthermore, the ensemble model achieves the best performance for predicting both implicit and explicit discourse relations simultaneously.

For the example (1), the baseline neural tensor model predicted both implicit relations wrongly (“Implicit-Contingency” between DU2 and DU3; “Implicit-Expansion” between DU3 and DU4), while our paragraph-level model predicted all the four discourse relations correctly, which indicates that paragraph-wide contexts play a key role in implicit discourse relation prediction.

(2): [Marshall came clanking in like Marley’s ghost dragging those chains of brigades and air wings and links with Arab despots.]DU1 (Implicit-Temporal) [He wouldn’t leave]DU2 until (Explicit-Temporal) [Mr. Cheney promised to do whatever the Pentagon systems analysts told him.]DU3

Our basic paragraph-level model wrongly predicted the implicit discourse relation between DU1 and DU2 to be “Implicit-Comparison”, without being able to effectively use the succeeding “Explicit-Temporal” relation. On the contrary, the full model corrected this mistake by modeling discourse relation patterns with the CRF layer.

We acknowledge the support of NVIDIA Corporation for their donation of one GeForce GTX TITAN X GPU used for this research.