We study the problem of fairly allocating a set of indivisible goods among n agents with additive valuations. Envy-freeness up to any good (EFX) is arguably the most compelling fairness notion in this context. However, the existence of EFX allocations has not been settled and is one of the most important problems in fair division. Towards resolving this problem, many impressive results show the existence of its relaxations, e.g., the existence of 0.618-EFX allocations, and the existence of EFX at most n-1 unallocated goods. The latter result was recently improved for three agents, in which the two unallocated goods are allocated through an involved procedure. Reducing the number of unallocated goods for arbitrary number of agents is a systematic way to settle the big question. In this paper, we develop a new approach, and show that for every ε∈ (0,1/2], there always exists a (1-ε)-EFX allocation with sublinear number of unallocated goods and high Nash welfare. For this, we reduce the EFX problem to a novel problem in extremal graph theory. We introduce the notion of rainbow cycle number R(·). For all d ∈ℕ, R(d) is the largest k such that there exists a k-partite digraph G =(∪_i ∈ [k] V_i, E), in which 1) each part has at most d vertices, i.e., | V_i |≤ d for all i ∈ [k], 2) for any two parts V_i and V_j, each vertex in V_i has an incoming edge from some vertex in V_j and vice-versa, and 3) there exists no cycle in G that contains at most one vertex from each part. We show that any upper bound on R(d) directly translates to a sublinear bound on the number of unallocated goods. We establish a polynomial upper bound on R(d), yielding our main result. Furthermore, our approach is constructive, which also gives a polynomial-time algorithm for finding such an allocation. 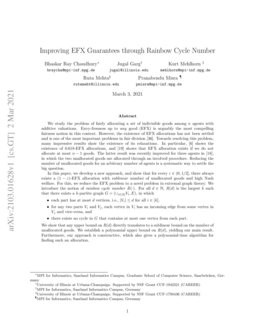 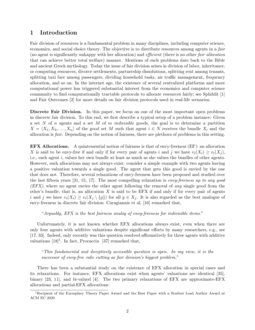 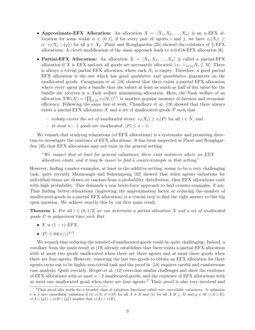 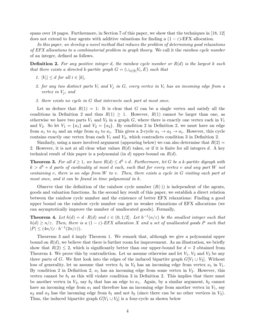 Fair and Efficient Allocations of Chores under Bivalued Preferences

We study the problem of fair and efficient allocation of a set of indivi...
Jugal Garg, et al. ∙

We study the problem of allocating a set of indivisible goods among agen...
Bhaskar Ray Chaudhury, et al. ∙

We study the problem of allocating a set of indivisible items among agen...
Bhaskar Ray Chaudhury, et al. ∙