In this paper we focus on learning optimized partial differential equation (PDE) models for image filtering. In this approach, the grey-scaled images are represented by a vector field of two real-valued functions and the image restoration problem is modelled by an evolutionary process such that the restored image at any time satisfies an initial-boundary-value problem of cross-diffusion with reaction type. The coupled evolution of the two components of the image is determined by a nondiagonal matrix that depends on those components. A critical question when designing a good-performing filter lies in the selection of the optimal coefficients and influence functions which define the cross-diffusion matrix. We propose the use of deep learning techniques in order to optimize the parameters of the model. In particular, we use a back propagation technique in order to minimize a cost function related to the quality of the denoising processe, while we ensure stability during the learning procedure. Consequently, we obtain improved image restoration models with solid mathematical foundations. The learning framework and resulting models are presented along with related numerical results and image comparisons. 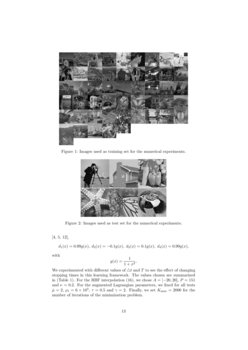 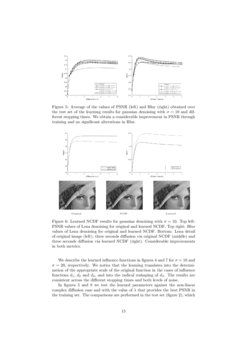 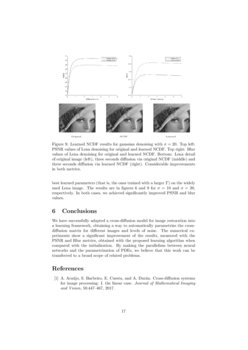 In this report, we present and compare the results of an improved fracti...
Uche A. Nnolim, et al. ∙

The Gradient Vector Flow (GVF) is a vector diffusion approach based on P...
Gilson A. Giraldi, et al. ∙

This report describes the experimental results obtained using a proposed...
U. A. Nnolim, et al. ∙

Nonlinear diffusion processes are well-known and widely used for image noise removal. Roughly speaking, the idea is to combine an effective noise reduction by diffusion with the preservation of the edges and other important image features. Amongst the better known approaches are those where the diffusion coefficient depends on the gradient with an inverse proportion, [15, 18].

The use of nonlinear complex diffusion filters (NCDF) where the image is represented by a complex function and the process of filtering is governed by a diffusion equation with a complex-valued diffusion coefficient, was investigated in [12]. Those filters, which bring the advantage of using the imaginary part of the solution as an edge detector avoiding the computation of the gradient to control the diffusion coefficient, can be successfully applied for denoising in particular for medical imaging despeckling [6, 16].

A complex diffusion equation can be written as a cross-diffusion system for the real and imaginary parts. The use of general cross-diffusion systems for image processing, which encompasses the complex-diffusion equations as particular cases, was investigated in [2]. The theoretical studies of the correspondent initial valued boundary problems were presented in [1] and [2] for the linear and nonlinear cases, respectively, where well-posedness and some scale-space representation properties were derived under hypothesis on the cross-diffusion coefficient matrix. However, besides these conditions, there is not much insight on the form that these coefficients should take in practical applications. In [3], the same authors applied the cross-diffusion model to several examples related to the problem of reducing the speckle noise in optical coherence tomography (OCT) images. The conclusion is that the performance of the model is greatly influenced by the choice of the cross-diffusion coefficient matrix.

All those methods based on diffusion filtering are highly dependent on some crucial parameters (e.g. [2, 17]). The parameters that lead to the most effective methods vary depending on the acquisition methods, the nature of the images and the associated noise profile. Furthermore, diffusion filters require the specification of a stopping time. To circumvent this issue, a reaction term can be introduced which keeps the steady-state solution close to the original image [18].

The challenge lies in the formulation of robust models with optimal parameters corresponding to each architecture. The use of neural networks for image processing tasks has set the pace of current research in this area. However, the general intrinsic “black box” nature of such algorithms is a drawback, particularly in the context of medical applications. In

[10] the authors use a learning framework inspired in nonlinear reaction diffusion processes where the filters and the influence functions are simultaneously learned from training data. The results are auspicious. There are, however, some important questions remaining: the numerical solution is not related with the original reaction diffusion problem, and more importantly, the qualitative properties of the computed solution are not derived. Moreover, the method does not cover promising models as the one based on cross-diffusion.

We propose the use of deep learning techniques such as backpropagation [13] and Adam algorithm [14] to optimize the parameters of a system of PDEs for a specific task. In this work, we focus on nonlinear cross-diffusion with reaction filters in order to optimize the reaction parameter and the influence functions of the cross-diffusion matrix for the removal of gaussian noise.

The optimization process we suggest includes the stability of the inherent numerical method, which is crucial for obtaining successful results. We drive our attention first to synthetic images in order to develop our learning strategy. The methodology consists in the parametrization of the functions that govern the cross-diffusion system, the computation of the gradient of a cost function with respect to these parameters and the application of the backpropagation technique, widely used in neural network supervised learning, to learn the optimal parameters. Experiments in real noisy images show that the training process improves significantly the performance of the filters.

Our contributions can be summarized as follows:

The article is organized as follows. In Section 2 the fully discrete cross-diffusion with reaction model is presented. Next, the stability conditions are derived. Section 4 is devoted to the learning model. We present the numerical experiments in Section 5. We end the paper with a section dedicated to conclusions.

where Ω=(a1,b1)×(a2,b2)⊂R2 is the domain of interest, u0 and v0 are the given initial conditions for u and v and η denotes the outward normal vector to the boundary Γ=∂Ω. The cross-diffusion matrix of the model is given by

We denote by Zmj the value of a mesh function Z at the point (xj,tm). For the formulation of the finite difference approximations, we use the centered finite difference quotients in the kth spatial direction, for k=1,2,

In order to formulate the discrete cross-diffusion restoration problem, let u0:Ωh→R be a discrete real-valued function standing for the grey level values on Ωh of the noisy image to be restored. From u0, an initial distribution W0=(U0,V0), for the cross-diffusion, is required. This is given by two real-valued functions U0,V0:Ωh→R, that can be selected following different criteria. A simple choice, that will be considered in the experiments we present later in this paper, consists of taking U0(xj)=u0(xj) and V0(xj)=0, xj∈¯¯¯¯Ωh. A more detailed discussion on the initial data can be seen in [1, 2].

Let Wmj=(Umj,Vmj)⊤, such that xj∈¯¯¯¯Ωh. Given the initial solution W0j=(U0j,V0j), the numerical solution of (1) at the time tm+1 is obtained considering the following finite difference scheme

and θ∈{0,1}. If θ=0 then (3) is an explicit method. If θ=1 then method (3) is semi-implicit and its solution is obtained by solving a system of linear equations. In the next section we will derive the stability properties of both, explicit and semi-implicit, methods. Later, in sections 4.2 and 4.3, we will discuss their role in our learning strategy: to optimize the cross-diffusion model we will use the explicit scheme ; to denoise the images we will use the semi-implicit discretization of the optimized model.

Equations (3) and (4), for j such that xj∈Γh, are defined using points of the form xj+ek and xj−ek, which don’t belong to Ωh and are not yet defined. For those points xj+ek and xj−ek, we consider the solution in xj−ek and xj+ek, respectively. This corresponds to the usual discretization of the homogeneous Neumann boundary conditions on Γh with central finite differences.

3 Stability of the numerical scheme

To simplify the notation and where it is clear from the context, we write in what follows dℓ instead of dℓ(Wm), or dℓ(Wm)j, for ℓ=1,2,3,4.

Multiplying both members of equations (3) and (4) by Um+θ and Vm+θ, respectively, according to the discrete inner product (⋅,⋅)h, and using summation by parts we get

For any ϵ>0 we have that

3.1 Stability of the semi-implicit scheme

We start by considering the case where θ=1. With the assumption that

which corresponds to the natural assumption of the diffusion matrix D to be uniformly positive definite, from (5) and (6) we get

for some λmax,ζ∈IR+ where ϵ is a constant arbitrarily chosen, we get

and we conclude that the method is stable.

3.2 Stability of the explicit scheme

Let η=ϵ. In order to obtain a stable scheme we impose that

and we conclude that the method is stable.

to be semi-positive definite, that is, the eigenvalues of

M are all non-negative. Using the Gershgorin Theorem, a sufficient condition for the method to be stable is to impose that the influence functions satisfy, for some ϵ>0,

Our goal is to optimize the parameters of our model using deep learning techniques. In order to adapt the cross-diffusion scheme (3)-(4) to a neural network architecture, we concatenate U and V into a single column vector w with 2N1N2 entries:

with λm+θ>0, and where the first difference matrices (K∗r∗) are block matrices:

kxr and kyr denote the backward difference operators with respect to x and y, respectively. The matrices Dx,mL,Dy,mL,Dx,mR and Dy,mR are 2N1N2×2N1N2 diagonal matrices. Each entry (j,j) of Dx,mL and Dy,mL depend on the function d1 for j=1,…,N1N2 and on the function d4 for j=N1N2+1,…,2N1N2, at the time tm. The entries of Dx,mR and Dy,mR follow the same pattern, replacing d1 and d4 by d2 e d3, respectively. It remains to define the difference matrices Kxl and Kyl:

where kxl and kyl denote the forward difference operators with respect to x and y, respectively.

We reiterate that the scheme (15) is equivalent to the cross-diffusion scheme (3)-(4).

4.1 Parameterization of the influence functions

[8]. Here we consider that they only depend on the second component of the vector w=(u,v)⊤, i.e., they depend on the component which plays the role of edge detector. Each of these functions has the expression

where μi, for i=1,...,P, are equidistant points in the set A of edge-detector range of values, ν is a positive scalar (the so called scale of the RBF), and δℓ,i are, for each ℓ=1,…,4, the Pinterpolants od dℓ. A good approximation requires a careful balance between ν and P.

In the learning model, we consider in (15) λm+θ=λ, where λ is a positive scalar.

In order to optimize the influence functions of the cross diffusion matrix d1,d2,d3 and d4 and also the scalar λ which characterizes the reaction term, a training cost function and a training dataset are required. We will use a set of B gray-scale images which will serve as basis for our training set. We fix the time-step Δt and a number of steps M, which will result in a cross-diffusion stopping time of T=MΔt. In the learning viewpoint, we will have a M

and we must now obtain ∂L∂Θ(Θ,wM1,…,wMB,wnl1,…,wnlB) to solve the minimization problem.

To obtain a stable semi-implicit scheme, instead of minimizing the loss function (17) we seek the solution of the constrained optimization problem

This constraints ensure that (7) hold. We first note that (18b)-(18c) are not in the standard formulation over the values of Θ. As the radial basis functions (16) are strictly positive, we replace (18b)-(18c) with

using the fact that (19a)-(19d) implies (18b)-(18c). To solve the inequality constrained problem we define the augmented Lagrangian L as