Every Boolean function can be uniquely represented as a multilinear polynomial. The entropy and the total influence are two ways to measure the concentration of its Fourier coefficients, namely the monomial coefficients in this representation: the entropy roughly measures their spread, while the total influence measures their average level. The Fourier Entropy/Influence conjecture of Friedgut and Kalai from 1996 states that the entropy to influence ratio is bounded by a universal constant C. Using lexicographic Boolean functions, we present three explicit asymptotic constructions that improve upon the previously best known lower bound C>6.278944 by O'Donnell and Tan, obtained via recursive composition. The first uses their construction with the lexicographic function ℓ〈 2/3〉 of measure 2/3 to demonstrate that C>4+3_43>6.377444. The second generalizes their construction to biased functions and obtains C>6.413846 using ℓ〈Φ〉 , where Φ is the inverse golden ratio. The third, independent, construction gives C>6.454784, even for monotone functions. Beyond modest improvements to the value of C, our constructions shed some new light on the properties sought in potential counterexamples to the conjecture. Additionally, we prove a Lipschitz-type condition on the total influence and spectral entropy, which may be of independent interest. 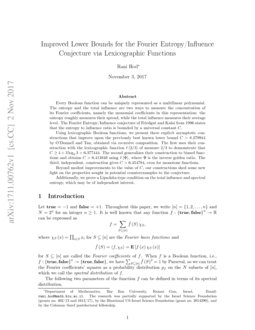 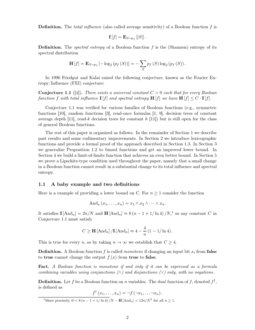 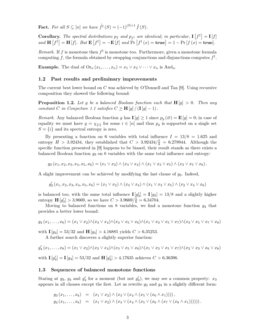 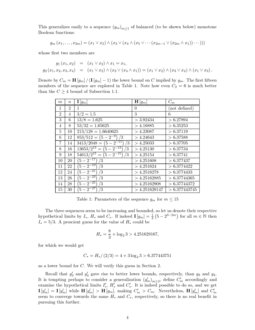 Entropy versus influence for complex functions of modulus one

The total influence of a function is a central notion in analysis of Boo...
Esty Kelman, et al. ∙

A proof of the Shepp-Olkin entropy monotonicity conjecture

Coin Theorems and the Fourier Expansion

In this note we compare two measures of the complexity of a class F of B...
Rohit Agrawal, et al. ∙

by Parseval, so we can treat the Fourier coefficients’ squares as a probability distribution

pf on the N subsets of [n], which we call the spectral distribution of f.

The following two parameters of the function f can be defined in terms of its spectral distribution.

In 1996 Friedgut and Kalai raised the following conjecture, known as the Fourier Entropy/Influence (FEI) conjecture:

There exists a universal constant C>0 such that for every Boolean function f with total influence I[f] and spectral entropy H[f] we have H[f]≤C⋅I[f].

[11], read-k decision trees for constant k [11]) but is still open for the class of general Boolean functions.

The rest of this paper is organized as follows. In the remainder of Section 1 we describe past results and some rudimentary improvements. In Section 2 we introduce lexicographic functions and provide a formal proof of the approach described in Section 1.3. In Section 3 we generalize Proposition 1.2 to biased functions and get an improved lower bound. In Section 4 we build a limit-of-limits function that achieves an even better bound. In Section 5 we prove a Lipschitz-type condition used throughout the paper, namely that a small change in a Boolean function cannot result in a substantial change to its total influence and spectral entropy.

1.1 A baby example and two definitions

Here is a example of providing a lower bound on C. For n≥1 consider the function

This is true for every n, so by taking n→∞ we establish that C≥4.

A Boolean function f is called monotone if changing an input bit xi from false to true cannot change the output f(x) from true to false.

A Boolean function is monotone if and only if it can be expressed as a formula combining variables using conjunctions (∧) and disjunctions (∨) only, with no negations.

Let f be a Boolean function on n variables. The dual function of f, denoted f†, is defined as

If f is monotone then f† is monotone too. Furthermore, given a monotone formula computing f, the formula obtained by swapping conjunctions and disjunctions computes f†.

1.2 Past results and preliminary improvements

The current best lower bound on C was achieved by O’Donnell and Tan [9]. Using recursive composition they showed the following bound:

Any balanced Boolean function g has I[g]≥1 since pg(∅)=E[g]=0; in case of equality we must have g=χ{i} for some i∈[n] and thus pg is supported on a single set S={i} and its spectral entropy is zero.

A slight improvement can be achieved by modifying the last clause of g3. Indeed,

Moving to balanced functions on 8 variables, we find a monotone function g4 that provides a better lower bound:

for a moment (but not

g′3), we may see a common property: x3 appears in all clauses except the first. Let us rewrite g3 and g4 in a slightly different form:

This generalizes easily to a sequence (gm)m≥1 of balanced (to be shown below) monotone Boolean functions:

whose first two members are

Denote by Cm=H[gm]/(I[gm]−1) the lower bound on C implied by gm. The first fifteen members of the sequence are explored in Table 1. Note how even C2=6 is much better than the C≥4 bound of Subsection 1.1.

The three sequences seem to be increasing and bounded, so let us denote their respective hypothetical limits by I∗, H∗ and C∗. If indeed I[gm]=13(5−23−2m) for all m∈N then I∗=5/3. A prescient guess for the value of H∗ could be

for which we would get

as a lower bound for C. We will verify this guess in Section 2.

Recall that g′3 and g′4 gave rise to better lower bounds, respectively, than g3 and g4. It is tempting perhaps to consider a generalization (g′m)m≥3, define C′m accordingly and examine the hypothetical limits I′∗, H′∗ and C′∗. It is indeed possible to do so, and we get I[g′m]=I[g′m] while H[g′m]>H[gm], making C′m>Cm. Nevertheless, H[g′m] and C′m seem to converge towards the same H∗ and C∗, respectively, so there is no real benefit in pursuing this further.

It remains to verify that gm is indeed balanced for all m≥1. Let us write it as

The function Gm belongs to a class of monotone Boolean functions called lexicographic functions, as we will see in Section 2.1.

For simplicity of notation, we abbreviate and write Pr[f(x)] or even Pr[f] to denote Pr[f(x)=true]. Since

to prove Pr[gm]=12, it suffices to verify the following (see Appendix A for the calculation):

2 A Tale of Two Thirds

Although each of (Cm)15m=2 from Table 1 is a valid, explicit lower bound on C, the asymptotic discussion in Subsection 1.3 was more of a wishful thinking rather than a mathematically sound statement.

In this section we explore the class of lexicographic functions, develop tools to compute total influence and spectral entropy, and then rigorously calculate I∗, H∗ and C∗.

Fix integers n≥1 and 0≤s≤N. Denote by Ln⟨s⟩⊆{true,false}n the initial segment of cardinality s (with respect to the lexicographic order on {true,false}n), and denote by ℓn⟨s⟩:{true,false}n→{true,false}

The function ℓn⟨s⟩ is monotone and its dual is .

If s is even then ℓn⟨s⟩ is isomorphic to ℓn−1⟨s/2⟩ (when the latter is extended from n−1 to n variables by adding an influenceless variable).

be an odd integer, and let

By definition, to determine the value of ℓn⟨s⟩ for an input x, we need to compare x with →s element by element. This gives a neat formula for ℓn⟨s⟩:

From (1) we derive an important property of lexicographic functions.

This can be interpreted as saying that the average decision tree complexity of ℓn⟨s⟩ is 2−(n+2)/N.

We extend the definition of lexicographic functions by writing ℓn⟨μ⟩=ℓn⟨⌊μN⌋⟩ for some 0≤μ≤1. Note that ⌊μN⌋ is not necessarily odd, so the effective number of variables can be smaller.

Fix 0<μ<1 and consider the sequence (ℓn⟨μ⟩)n≥1. Whenever μ is a dyadic rational222That is, a rational number of the form a/2b., ℓn⟨μ⟩ converges to a fixed function ℓ⟨μ⟩ (e.g., ℓ⟨3/4⟩=Or2 in the example above). We would like to consider the limit object ℓ⟨μ⟩=limnℓn⟨μ⟩ for other values of μ as well.

It may sound intimidating; after all, ℓ⟨μ⟩:{true,false}N→{true,false} is a Boolean function on ℵ0 variables, which is quite a lot. Nevertheless, by Fact 2.1, ℓ⟨μ⟩ only reads two input bits on average.

Moreover, we care about the total influence and spectral entropy of functions. By Lemmata 5.1 and 5.2 from Section 5, I[ℓn⟨μ⟩]n→∞−−−→I[ℓ⟨μ⟩] and H[ℓn⟨μ⟩]n→∞−−−→H[ℓ⟨μ⟩]. Indeed, ℓn⟨μ⟩ differs from ℓn−1⟨μ⟩ (when considering the latter as a function on n variables by adding an influenceless variable) in at most one place, and thus (I[ℓn⟨μ⟩])n≥1 and (H[ℓn⟨μ⟩])n≥1 are Cauchy sequences.

The edge isoperimetric inequality in the discrete cube (by Harper [5], with an addendum by Bernstein [2], and independently Lindsey [7]) gives a lower bound on the total influence of Boolean functions.

In fact, they proved that lexicographic functions are the minimizers of total influence.

Theorem 2.3 explains our interest in lexicographic functions: when seeking a function f with large entropy/influence ratio H[f]/I[f], it makes sense to minimize I[f].

In [6], Hart exactly computed the total influence of lexicographic functions:

where wt(x) is the Hamming weight of x.

Let us rephrase Proposition 2.4 a bit.

By induction on t. For details see Appendix A. ∎

This leads to the following observation:

Four-thirds is actually the maximum influence attainable by any lexicographic function, as the following claim shows:

where the full calculation is in Appendix A.

contradicting either the choice of μ0 or one of the two previous cases.∎

We now present the main tool we use to compute total influence and spectral entropy for our construction.

and denote by ι=ℓ⟨1/2⟩ the one variable identity function.

As mentioned in the introduction, it was shown by [1, 9] that read-once formulas satisfy Conjecture 1.1 with the constant C≤10.

Proposition 2.8 gets simplified significantly when one of the functions is balanced, using the following observation (see Appendix A for the calculation):

Let f be a Boolean function and let p=Pr[f]. Then

We could use Claim 2.5 to compute the total influence of Gm=ℓ2m−1⟨2/3⟩, but we also need its spectral entropy, so we use its recursive definition and Corollary 2.10. Since we are interested in asymptotics, we prefer working directly with G=ℓ⟨2/3⟩, which satisfies the “equation” G=ι⊔(ι⊓G).

and we can solve for

Note that it is possible to fully compute the total influence of Gm:

and to write an expression for its spectral entropy:

but it is far easier to use the exponentially fast convergeance H[Gm]m→∞−−−−→H[G], rather than find an exact closed expression for H[Gm].

Similarly, it is possible to exactly compute the total influence and spectral entropy of ℓ⟨p⟩ for any rational p. Indeed, every rational number has a recurrent binary representation, yielding linear equations in I[ℓ⟨p⟩] and H[ℓ⟨p⟩].

Approximating I[ℓ⟨p⟩] and H[ℓ⟨p⟩] for an irrational p can be done, with exponentially decreasing error, via writing p as a limit of a sequence of dyadic rationals (e.g., truncated binary representations of p).

Recall that gm is the conjunction of two functions: Or2(x1,x2) and Gm(x3,…,x2m,x1). By Fact 2.1, these are almost independent since the shared variable x1 has exponentially small influence on Gm.

When considering the limit object g=limmgm, the dependence disappears and we have g=Or2⊓G=ℓ⟨3/4⟩⊓ℓ⟨2/3⟩, so we can calculate its total influence and entropy using Proposition 2.8 (full details in Appendix A):