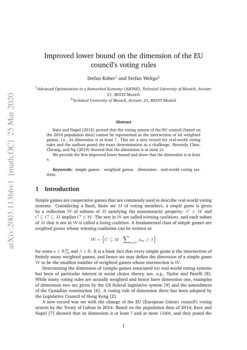 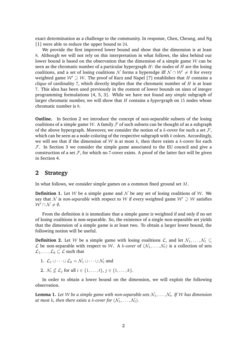 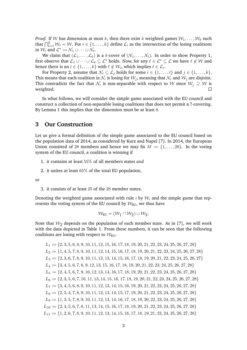 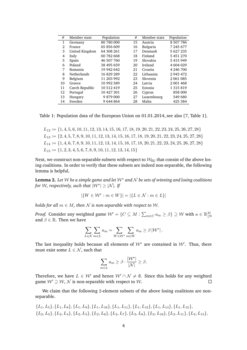 Simple games are cooperative games that are commonly used to describe real-world voting systems. Considering a fixed, finite set M of voting members, a simple game is given by a collection W of subsets of M satisfying the monotonicity property: C∈W and C⊆C′⊆M implies C′∈W. The sets in W are called winning coalitions, and each subset of M that is not in W is called a losing coalition. A fundamental class of simple games are weighted games whose winning coalitions can be written as

Determining the dimension of (simple games associated to) real-world voting systems has been of particular interest in social choice theory, see, e.g., Taylor and Pacelli [8]. While many voting rules are actually weighted and hence have dimension one, examples of dimension two are given by the US federal legislative system [9] and the amendment of the Canadian constitution [6]. A voting rule of dimension three has been adopted by the Legislative Council of Hong Kong [2].

A new record was set with the change of the EU (European Union) council’s voting system by the Treaty of Lisbon in 2014. Based on the population data of 2014, Kurz and Napel [7] showed that its dimension is at least 7 and at most 13368, and they posed the exact determination as a challenge to the community. In response, Chen, Cheung, and Ng [1] were able to reduce the upper bound to 24.

We provide the first improved lower bound and show that the dimension is at least 8. Although we will not rely on this interpretation in what follows, the idea behind our lower bound is based on the observation that the dimension of a simple game W can be seen as the chromatic number of a particular hypergraph H: the nodes of H are the losing coalitions, and a set of losing coalitions N forms a hyperedge iff N∩W′≠∅ for every weighted game W′⊇W. The proof of Kurz and Napel [7] establishes that H contains a clique of cardinality 7, which directly implies that the chromatic number of H is at least 7. This idea has been used previously in the context of lower bounds on sizes of integer programming formulations [4, 5, 3]. While we have not found any simple subgraph of larger chromatic number, we will show that H contains a hypergraph on 15 nodes whose chromatic number is 8.

In Section 2 we introduce the concept of non-separable subsets of the losing coalitions of a simple game W. A family F of such subsets can be thought of as a subgraph of the above hypergraph. Moreover, we consider the notion of a k-cover for such a set F, which can be seen as a node-coloring of the respective subgraph with k colors. Accordingly, we will see that if the dimension of W is at most k, then there exists a k-cover for each F. In Section 3 we consider the simple game associated to the EU council and give a construction of a set F, for which no 7-cover exists. A proof of the latter fact will be given in Section 4.

In what follows, we consider simple games on a common fixed ground set M.

Let W be a simple game and N be any set of losing coalitions of W. We say that N is non-separable with respect to W if every weighted game W′⊇W satisfies W′∩N≠∅.

From the definition it is immediate that a simple game is weighted if and only if no set of losing coalitions is non-separable. So, the existence of a single non-separable set yields that the dimension of a simple game is at least two. To obtain a larger lower bound, the following notion will be useful.

Let W be a simple game with losing coalitions L, and let N1,…,Nt⊆L be non-separable with respect to W. A k-cover of (N1,…,Nt) is a collection of sets L1,…,Lk⊆L such that

In order to obtain a lower bound on the dimension, we will exploit the following observation.

Let W be a simple game with non-separable sets N1,…,Nt. If W has dimension at most k, then there exists a k-cover for (N1,…,Nt).

If W has dimension at most k, then there exist k weighted games W1,…,Wk such that ⋂ki=1Wi=W. For i∈{1,…,k} define Li as the intersection of the losing coalitions in Wi and L∗\coloneqqN1∪⋯∪Nt.

For Property 2, assume that Ni⊆Lj holds for some i∈{1,…,t} and j∈{1,…,k}. This means that each coalition in Ni is losing for Wj, meaning that Ni and Wj are disjoint. This contradicts the fact that Ni is non-separable with respect to W since Wj⊇W is weighted. ∎

In what follows, we will consider the simple game associated with the EU council and construct a collection of non-separable losing coalitions that does not permit a 7-covering. By Lemma 1 this implies that the dimension must be at least 8.

Let us give a formal definition of the simple game associated to the EU council based on the population data of 2014, as considered by Kurz and Napel [7]. In 2014, the European Union consisted of 28 members and hence we may fix M\coloneqq{1,…,28}. In the voting system of the EU council, a coalition is winning if

Denoting the weighted game associated with rule i by Wi and the simple game that represents the voting system of the EU council by WEU, we thus have

Note that W??? depends on the population of each member state. As in [7], we will work with the data depicted in Table 1. From these numbers, it can be seen that the following coalitions are losing with respect to WEU.

Next, we construct non-separable subsets with respect to WEU that consist of the above losing coalitions. In order to verify that these subsets are indeed non-separable, the following lemma is helpful.

Let W be a simple game and let W∗ and N be sets of winning and losing coalitions for W, respectively, such that |W∗|≥|N|. If

holds for all m∈M, then N is non-separable with respect to W.

The last inequality holds because all elements of W∗ are contained in W′. Thus, there must exist some L∈N, such that

Therefore, we have L∈W′ and hence W′∩N≠∅. Since this holds for any weighted game W′⊇W, N is non-separable with respect to W. ∎

We claim that the following 2-element subsets of the above losing coalitions are non-separable.

Otherwise, we may assume that Lj=L15. For all above pairs, exchanging the two members with the least population in Li∖L15 with the member of largest population in L15∖Li, results in two winning sets W1,W2. Again, N and W∗\coloneqq{W1,W2} satisfy the assumptions of Lemma 2, implying that N is non-separable.

To see that these sets are non-separable, consider the following sets of winning coalitions.

Observing that the pairs

satisfy the assumptions of Lemma 2, we see that the sets in (2) are indeed non-separable.

In the next section, we show that the non-separable sets in (1) and (2) do not admit a 7-cover. Recall that this implies that the dimension must be at least 8 by Lemma 1.

4 Proof that no 7-cover can exist

It can be easily verified that the only sets satisfying (i) are the following.

In what follows, for a weight-vector

Suppose first that none of the sets L1,…,L7 is equal to {L1,L3,L6}. In this case, consider the weight-vector

another contradiction. This completes our proof.

The second author would like to thank Gerhard Woeginger for bringing this topic to his attention.