Head CT is one of the most commonly performed imaging studied in the Emergency Department setting and Intracranial hemorrhage (ICH) is among the most critical and timesensitive findings to be detected on Head CT. We present BloodNet, a deep learning architecture designed for optimal triaging of Head CTs, with the goal of decreasing the time from CT acquisition to accurate ICH detection. The BloodNet architecture incorporates dependency between the otherwise independent tasks of segmentation and classification, achieving improved classification results. AUCs of 0.9493 and 0.9566 are reported on held out positive-enriched and randomly sampled sets comprised of over 1400 studies acquired from over 10 different hospitals. These results are comparable to previously reported results with smaller number of tagged studies. 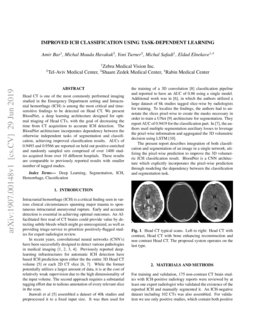 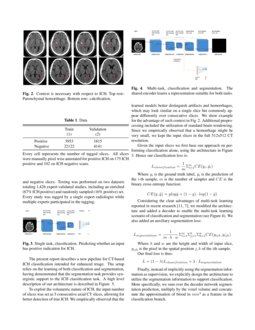 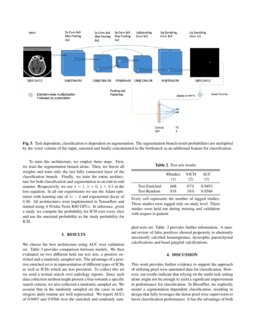 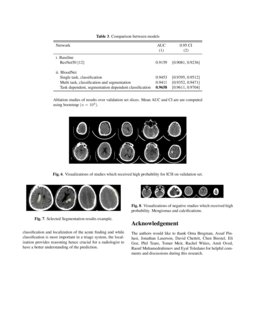 [textray, ccs, radbot, cf]. Previously reported deep-learning infrastructures for automatic ICH detection have based ICH prediction upon either the the entire 3D Head CT volume [deep3dconv] or each 2D CT slice [qureai, radnet]. While the former potentially utilizes a larger amount of data, it is at the cost of relatively weak supervision due to the high dimensionality of the input volume. The second approach requires a substantial tagging effort due to tedious annotation of every relevant slice in the scan.

Jnawali et al [deep3dconv] assembled a dataset of 40k studies and preprocessed it to a fixed input size. It was then used for the training of a 3D convolution [3dconvaction] classification pipeline and reported to have an AUC of 0.86 using a single model. Additional work was in [qureai], in which the authors utilized a large dataset of 6k studies tagged slice-wise by radiologists for training. To localize the findings, the authors had to annotate the slices pixel-wise to create the masks necessary in order to train a UNet [unet] architecture for segmentation. They report AUC of 0.9419 for the classification part. In [radnet], the authors used multiple segmentation auxiliary losses to leverage the pixel-wise information and aggregated the 3D volumetric decision using LSTM [hochreiter1997long].

For training and validation, 175 non-contrast CT brain studies with ICH-positive radiology reports were reviewed by at least one expert radiologist who validated the existence of the reported ICH and manually segmented it. An ICH-negative dataset including 102 CTs was also assembled. For validation we use only positive studies, which contain both positive and negative slices. Testing was performed on two datasets totaling 1,426 expert-validated studies, including an enriched (67% ICH positive) and randomly sampled (16% positive) set. Every study was tagged by a single expert radiologist while multiple experts participated in the tagging.

To exploit the volumetric nature of ICH, the input number of slices was set as 5 consecutive axial CT slices, allowing for better detection of true ICH. We empirically observed that the learned models better distinguish artifacts and hemorrhages, which may look similar on a single slice but commonly appear differently over consecutive slices. We show example for the advantage of such context in Fig  2. Additional preprocessing included the utilization of standard brain-windowing. Since we empirically observed that a hemorrhage might be very small, we kept the input slices in the full 512x512 CT resolution.

Given the input slices we first base our approach on performing classification alone, using the architecture in Figure 3. Hence our classification loss is:

Where yi is the ground truth label, ^yi is the prediction of the i-th sample, m is the number of samples and CE is the binary cross entropy function:

Where h and w are the height and width of input slice, yijk is the pixel in the spatial position j,k of the ith sample.

Our final loss is thus:

To train this architecture, we employ three steps. First, we train the segmentation branch alone. Then, we freeze all weights and train only the last fully connected layer of the classification branch. Finally, we train the entire architecture for both classification and segmentation in an end-to-end manner. Respectively, we use λ=1, λ=0, λ=0.5 in the loss equation. In all our experiments we use the Adam optimizer with learning rate of 1e−4 and exponential decay of 0.96

We choose the best architecture using AUC over validation set. Table 3 provides comparison between models. We then evaluated on two different held out test sets, a positive enriched and a randomly sampled sets. The advantage of a positive enriched set is in representation of different types of ICHs as well as ICHs which are less prevalent. To collect this set we used a textual search over radiology reports. Since such data collection method might present a bias towards a specific search criteria, we also collected a randomly sampled set. We assume that in the randomly sampled set the cases in radiologists daily routine are well represented. We report AUCs of 0.9493 and 0.9566 over the enriched and randomly sampled tests set. Table  2 provides further information. A manual review of false positives showed propensity to aberrantly misclassify calcified hemangiomas, dystrophic parenchymal calcifications and basal ganglial calcifications.